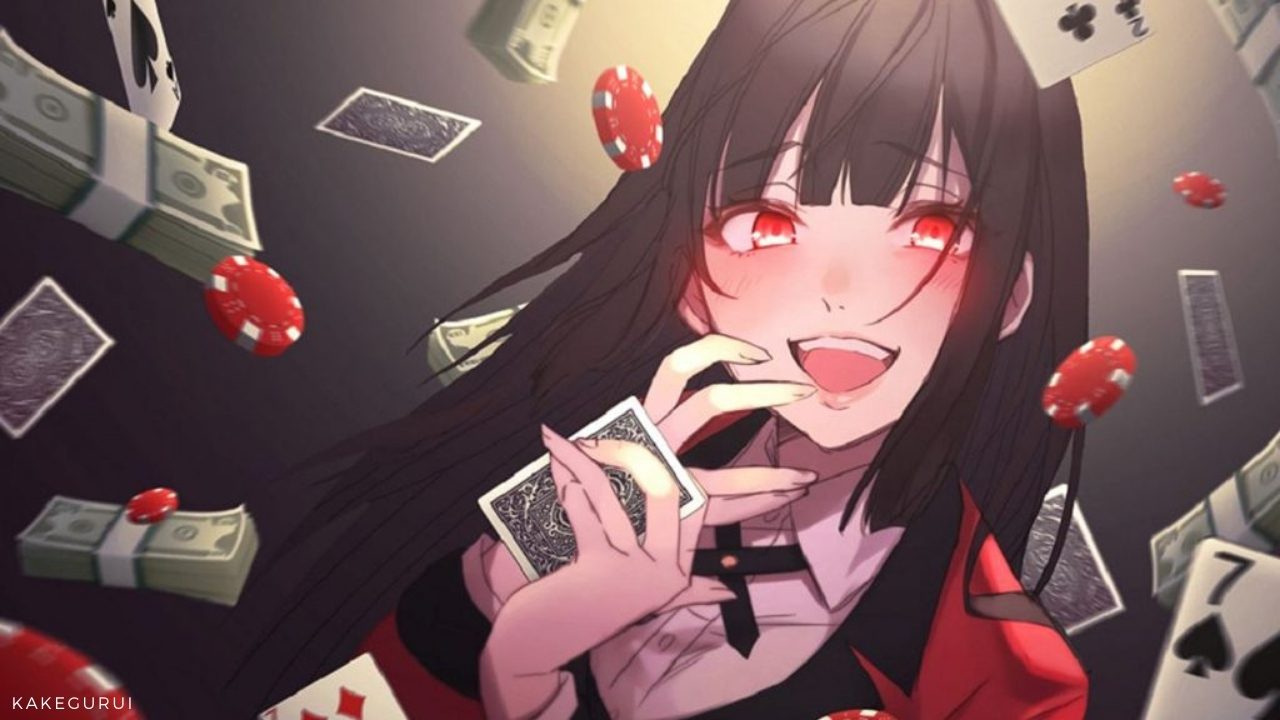 Do you want to watch an anime like Kakegurui? Homura Kawamoto created this Shonen series, and it began airing in July 2017, and a second season came in 2019. Whereas the manga began serializing on March 22, 2014, and the series is still going on. Anime plots surrounding the high school have always been a great seller. Therefore, this anime about gambling in high school had a great twist, and otakus came along with some excellent characters, which hooked us to this series. The series is such a hit that it got spin-offs and a prequel known as Kakegurui Twin. Further, live-action drama adaptations and movies also came out, and also a sequel movie will release in 2021. If you also want to follow ‘Kakegurui’, then you can watch the anime on Netflix.

The story revolves around Hyakkaou Private Academy, an elite high school for children from wealthy and influential families. However, the hierarchy of this school is different compared to others because the athletic and academic prowess doesn’t get any recognition. Instead, the hierarchy of this school is based on one’s gambling skills. In this academy, winners are the kings and queens of this school, whereas the losers spend a life of a slave and continue to live like one even after passing out. However, the school’s dynamics change when a beautiful girl, Yumeko Jabami, enrolls. Because she’s an absolute master in gambling and takes down the top shots in Hyakkaou’s hierarchy. There is no doubt this anime is really different, and fans have been looking for anime like Kakegurui. So no need to worry anymore and keep watching it on repeat because we will suggest anime like ‘Kakegurui’ in this article.

The 2015 high school anime series is Akira Hiramoto’s creation. Prison School has 12 episodes and one OVA, which aired from July 11, 2015, to September 26, 2015. Further, the Seinen manga was serialized from February 7, 2011, to December 25, 2017. Because of the series population, a television drama adaptation comprising nine episodes came in 2015. However, there are no updates about any new season. But you can visit Hulu and Crunchyroll to watch ‘Prison School Season One’. 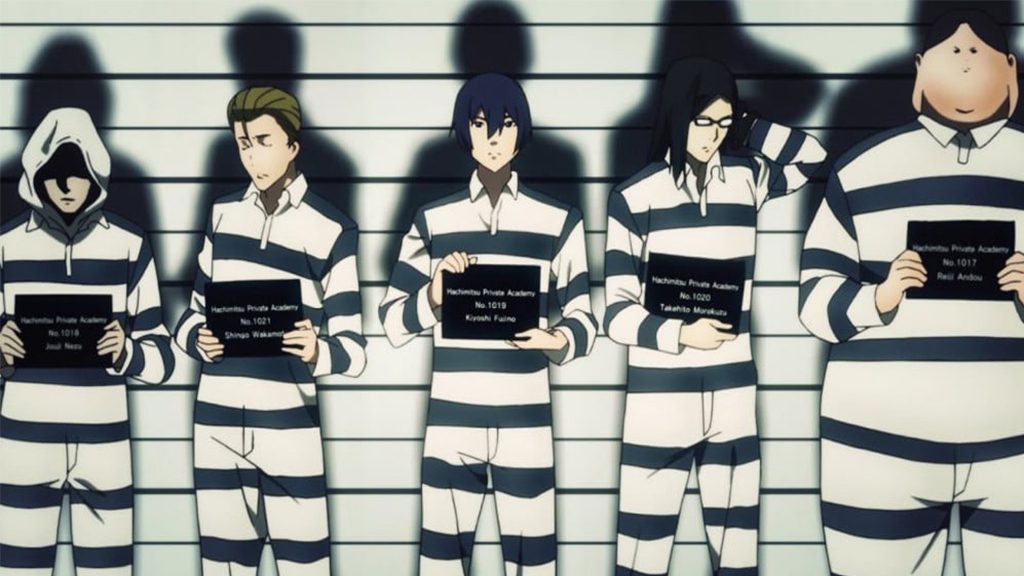 This anime is set in Hachimitsu Academy, which is the strictest girls’ high school and never allowed boys to admit in this academy. However, the school’s owner decided boys to enroll in the school. Therefore, Kiyoshi Fujino enrolls in Hachimitsu Academy, but only four more boys enrolled in this school apart from him. Further, the school’s huge girls majority instead becomes a curse for the five boys. As the school has severe punishments for boys, including one month stay in school’s prison for committing even a minor act. One day, the five boys are caught peeping into the girl’s changing room. Leading to them to imprisonment in school’s prison. Thus, they need to fulfill their punishment while their strict and attractive supervisors punish them.

There is no doubt ‘Shokugeki no Soma’ is an anime like ‘Kakegurui,’ but instead of gambling, this school’s hierarchy depends on one’s culinary skills. This shonen high school anime began airing on April 4, 2015, and ended after 86 episodes and five OVAs on September 26, 2020. Yūto Tsukuda wrote the manga series, which was serialized from November 26, 2012, to August 29, 2019. If you want to watch this mind-blowing high school anime, then Netflix is the place you need to visit. Further, you can read the manga on Viz. 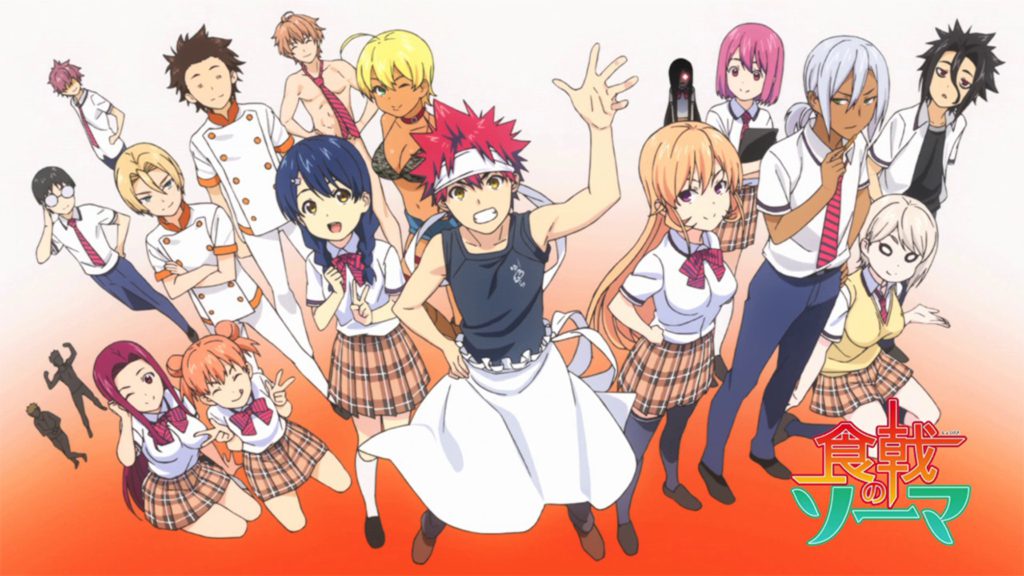 The story revolves around Yukihira Soma, who runs a family diner with his father, Joichiro. Soma further plans to take on the diner from his father and beat Joichiro’s culinary skills. However, Joichiro gets a new job as a chef, which requires him to travel around the globe. Thus, Joichiro closes the diner and enrolls Soma in Totsuki Saryo Culinary Institute, an elite culinary school. Therefore, Soma needs to face fellow aspiring chefs and defeat them in culinary competitions known as Shokugeki. On this journey, Soma takes down many talented chefs with the help of his friend he makes in Totsuki.

This shojo anime began airing on April 5, 2006, and ended after 26 episodes on September 26, 2006. Bisco Hatori is the creator of this feel-good series and the manga serialized from September 2002 to November 2010. It became a colossal hit among the otakus, especially among girls and teenagers, since the first episode. Resulting in a television drama series adaptation in 2011. Further, a movie also came out in 2012 based on this manga. 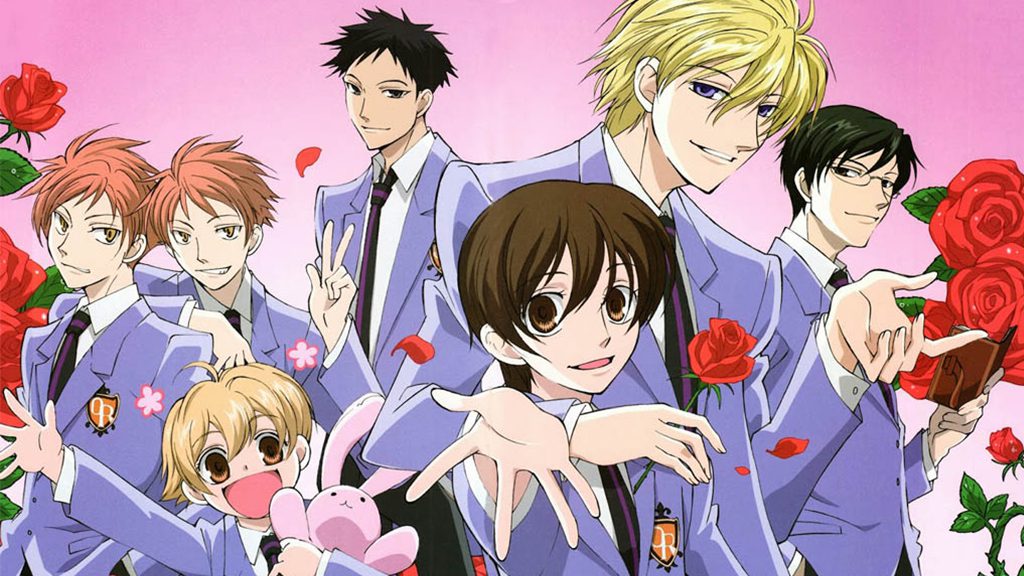 The ‘Ouran High School Host Club’ is an anime like ‘Kakegurui’. The story takes place in an elite high school, Ouran Academy, where only the rich kids study. However, a scholarship student, Haruhi Fujioka, enrolls in this school. One day, while looking for a quiet place to study, Haruhi comes across an abandoned Music Room. However, the Music Room is the base for the school’s Host Club, where six boys entertain the girls by serving sweets and tea. But Haruhi breaks an expensive vase and thus has to work as an errand boy to pay the debt. Soon, the host club members find out Haruhi is actually a girl but dresses and walks like a boy. They even promote her from an errand “boy” to a full-time host because of her skills in handling girls, who also think Haruhi is a boy.

This hilarious story of a high schooler raising the baby demon king is a creation of Ryuhei Tamura. The manga series was serialized from 2009 to 14, and later, a sequel, known as Beelzebub Another, was serialized from May 2014 to March 2015. Because of its success, an anime adaptation comprising 60 episodes aired from January 2011 to March 2012. Watch the hustle of raising the demon king on Crunchyroll. 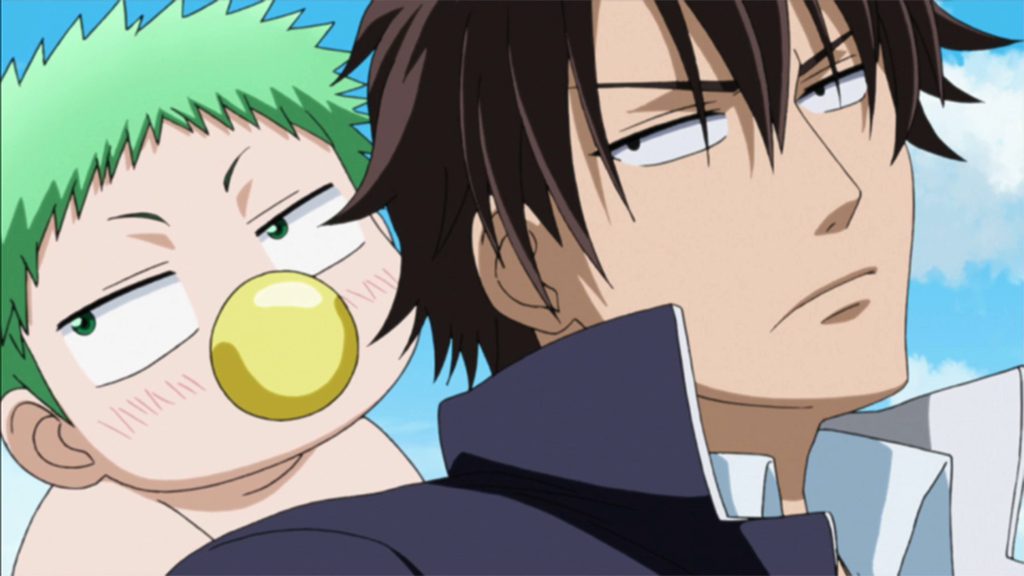 The story is set in Ishiyama High School, where the school’s top delinquent, Tatsumi Oga, comes across a fan floating in a river. Oga saved the man, but he split in half and had a baby inside him. But actually, the man was a demon, and the baby was none other than the son of Demon King, Beelzebub. Oga is the chosen one to become the adoptive father of baby Beel and raise him stronger to destroy the earth. In this journey to raise baby Beel, Oga comes across many enemy demons and also friends like Demon Maid, Hilda. But he continues living his life as a high school delinquent even while raising Beel. Without a doubt, raising the future demon king is no simple task.

In a high school anime, what can be the greater war than the war for academics? Then the answer to this question is love. Because nothing can top war for “high school” love, therefore, for otakus looking for amazing high school anime like ‘Kakegurui,’ then you should watch ‘Kaguya-sama: Love Is War. Aka Akasaka is the creator of this series. The manga began on June 14, 2018, and still, the story of high school love continues. Further, the anime series aired on January 12, 2019, and a second season out on April 11, 2020. Further, in 2021, the A-1 Pictures studio announced a third installment is in production. Because of the manga and anime popularity, live-action television drama and movies also came out. If you want to watch this mind-blowing high school anime, then visit Netflix. 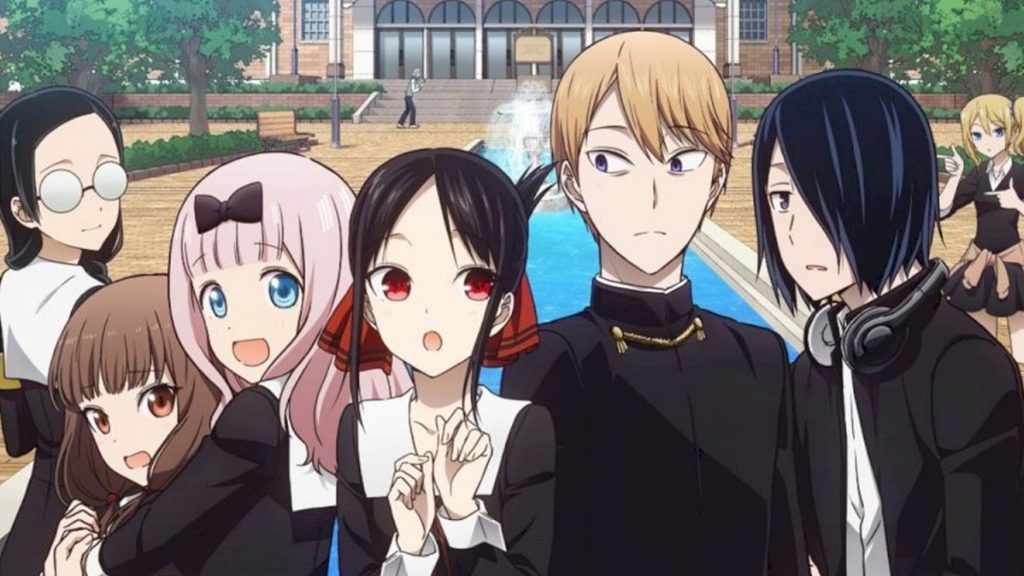 The story is about the student council president, Miyuki Shirogane, and vice-president, Kaguya Shinomiya. The two have romantic feelings for each other, but both are also egoistic and won’t confess their feeling instead try to make the other confess. This love war between the two students takes us all on a joyride of funny and “kawaii” moments that will make you eager to experience some high school love. On this journey. We also come across fellow student council members, which includes Chika Fujiwara, who is the creator of the infamous ‘Chika Dance’.

If you thought of gambling in high school can be the most entertaining plot for an anime. Then you haven’t watched Assassination Classroom, where high-schoolers are taught assassination skills to kill their homeroom teacher besides their normal high school curriculum. This anime is another mind-blowing high school shonen anime, which ran from January 2015 to June 2016. Yūsei Matsui wrote the manga, which began serializing on July 2, 2012, and ended after 21 volumes on March 25, 2016. The Shonen manga and anime became an enormous hit among the teenager. Therefore video games and live-action movie also came out on this series. You can watch this awesome high school anime series on Hulu or Netflix. 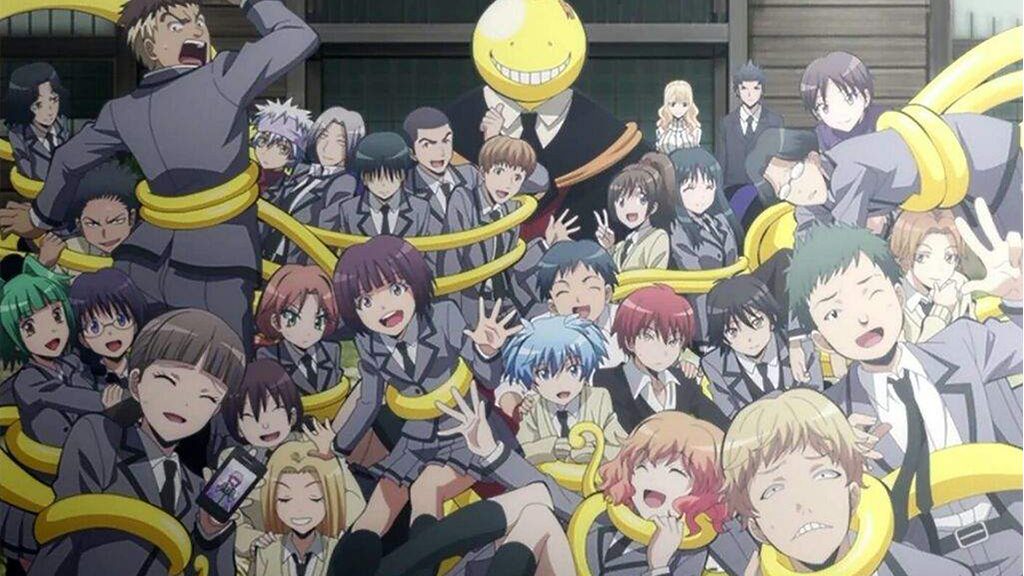 The story revolves around Kunugigaoka Junior High School’s worst class, Class 3-E, who are so bad that they are separated from the rest of the school building. The students of class 3-E are assigned the task of assassinating their teacher, Koro-sensei. Their teacher is actually a weird, funny-looking tentacled creature who destroyed 70 percent of the moon and set to destroy the earth. But he holds back his attack on the earth for a year. Meanwhile, he teaches class 3-A. However, he not only teaches them their usual syllabus but also the ways of a killer. In this series, we see Koro-sensei helping the students improve their grades while turning them into the best assassins. We also witness the truth of Koro-sensei’s past and his plans. Apart from Koro-sensei, the series also focuses on the development of Nagisa Shiota.