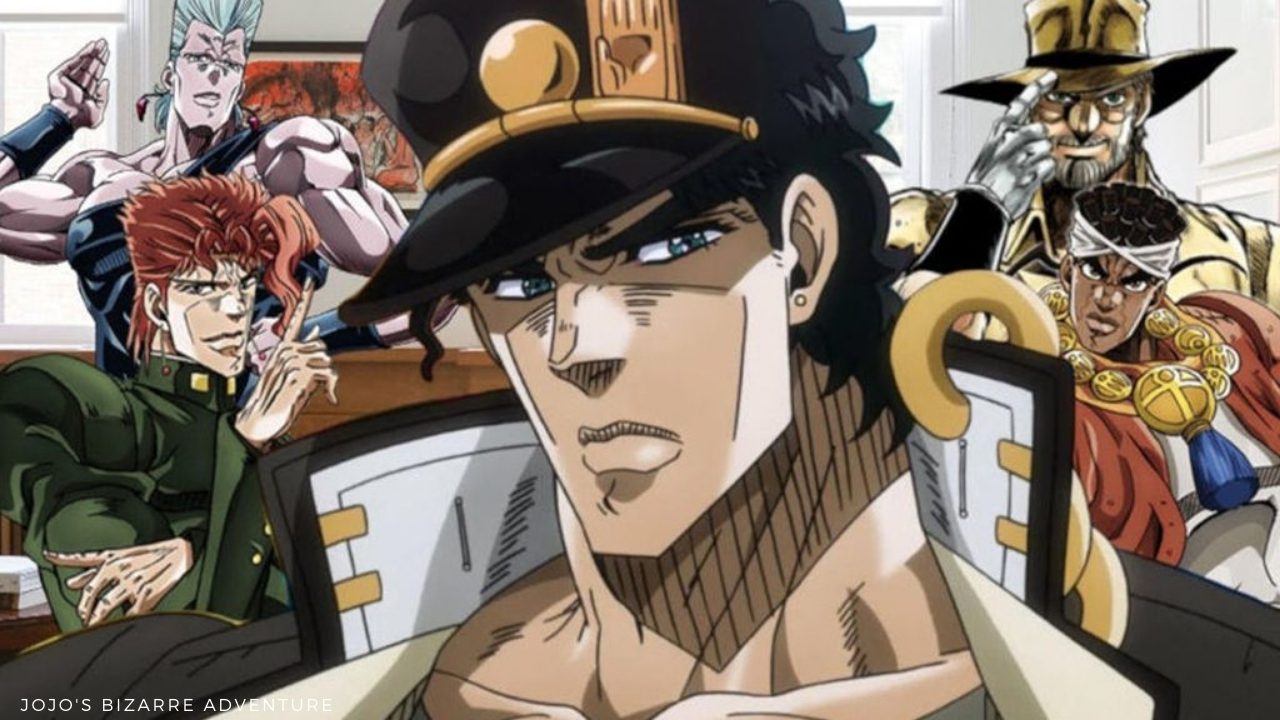 Want to watch an Anime Like JoJo’s Bizarre Adventure? Hirohiko Araki created this Shonen series, and it began airing on October 6, 2012, and ended after four seasons on July 28, 2019. Whereas the manga began serializing in 1987 and still continues. On this long journey of the Joestar family, otakus came along with some excellent characters, which hooked us to this series. If you also want to follow ‘JoJo’s Bizarre Adventure.’, then you can watch the anime on Crunchyroll or Netflix and further read the manga on Viz.

The story revolves around the Joestar family, who fight against their arch enemy Dio. The fight began with Dio Brando, the adoptive brother of Jonathan Joestar becomes a vampire and sets on to kill Jonathan and rule the world. Meanwhile, Jonathan also sets on a journey to stop Dio, and he learns Hamon to defeat the vampire. However, Dio resurrects later in the series, but only to Jotaro Kujo, using his new ability ‘stand’ to defeat him. Somehow, every protagonist has names that get them their nickname, JoJo.

However, we love this series and have watched the series multiple times. Further, fans have been looking for anime like JoJo to kill some time. But the good news for Jojo fans is the fifth installment of the anime is coming in winter 2021. However, until then, you can watch anime Like JoJo’s Bizarre Adventure and wait for JoJo’s Bizarre Adventure: Stone Ocean to come.

Persona 5 is an Anime Like JoJo’s Bizarre Adventure. The 2018 anime series is actually an adaptation of a video game of a similar name. Masashi Ishii Hama directed the series, whereas Shinichi Inotsume wrote this story. Persona 5 the animation has 28 episodes, including 26 episodes of the main story and two specials. Further, it also has two OVAs. If you want to watch the series, you can watch it on Hulu or Netflix. And further info into gaming, then you can also enjoy the game from Atlus. 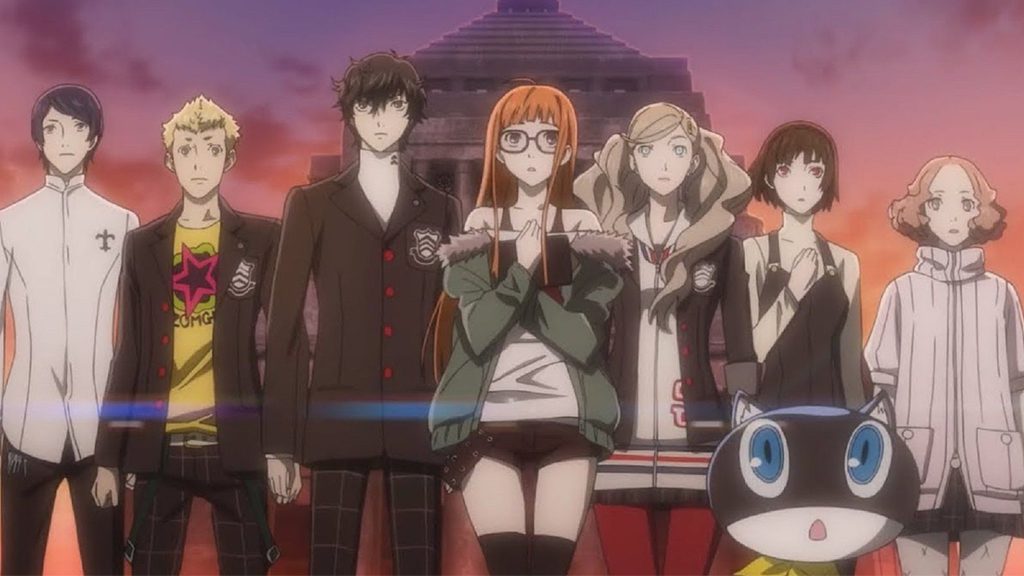 The plot of Persona five revolves around their young boy, Ren Amamiya. One day rent protects women from a drunken man. However, on false charges, he was put on probation. Soon, he attends a new school, Shujin Academy, where he comes across a power called Persona, which is the manifestation of his inner psyche. This power allows him to take the darkness from the heart. And so he starts a new group with his friends called the Phantom Thieves of Hearts and sets on a mission to steal corruption from the hearts of adults to reform this society.

This shonen anime began airing on July 31, 2019, and the first season comprises 12 episodes, whereas a second season with 12 episodes also came that year in October. Yabako Sandrovich wrote the manga series, which was serialized from April 2012 to August 2018. Also, a sequel manga known as Kengen Omega began serializing in January 2019, and it is still ongoing. If you want to watch this mind-blowing fighting anime, then Netflix is the place you need to visit. 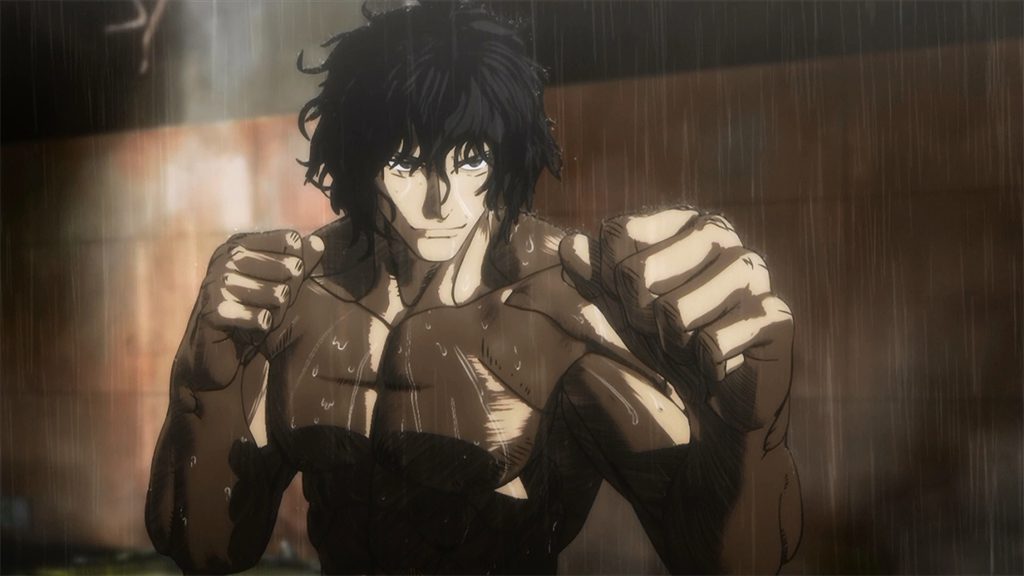 This story revolves around two people, an average salaryman, Yamashita Kazuo, and a fighter, Tokita “Ashura” Ohma. Kazuo works for Nogi Group, whose CEO Nagi Hibiki teams him up with Tokita to take part in the Kengen Annihilation Tournament. In this tournament, various business owners send their fighters to battle each other and give the winner gets the chairperson seat of the Kengen Association, which enables the person to have immense power and authority. However, as the story continues, a ghost from Ashura’s past haunts him. Further, Kazuo as well unfolds many mysteries surrounding the tournament and himself.

If you are an otaku, then you would have come across this popular line, “Omae Wa Mou Shinderu,” which translates to you are already dead. Therefore, you need to thank this shonen anime for this world-famous meme. Without a doubt, this anime is like Jojo. Buronson created this series, and it began airing on October 11, 1984, and ended on March 5, 1987, with 109 episodes. Whereas, Buronson’s manga was serialized from September 13, 1983, to August 8, 1988, which includes 27 volumes. You can visit Netflix, Amazon Prime Videos, or Crunchyroll to watch this classic anime. 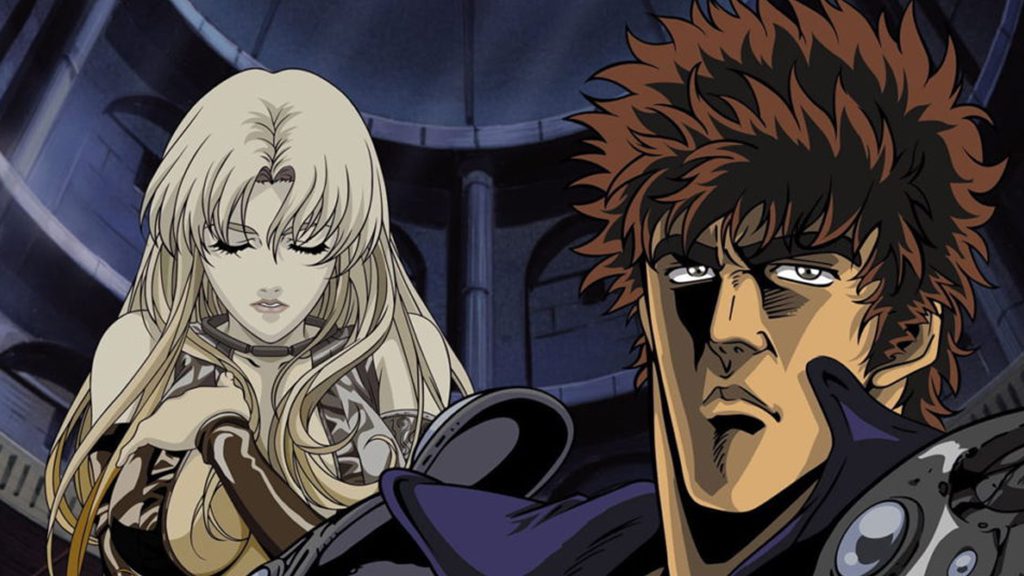 Fist Of The North Star

The story is set around the 1990s, when most of the civilization ended because of the worldwide nuclear war. And the remaining humankind is fighting over the shortage of food supply and water. Meanwhile, Kenshiro, who practices Hokuto Shinken, an ancient form of martial arts, loses her fiance with a jealous rival. Therefore, Ken is on a journey to protect the weak from the strong and cruel dictators. On this journey, he meets with an open girl Lin and Bat, the thief, who witnesses the great battles of Ken. Further, Kenshiro’s technique doesn’t harm the outside of a person but his organs. Therefore, many times his opponents believe nothing happened to which Ken says his most iconic line, and soon the enemies burst. So if you have a weak heart and can’t withstand gory scenes, then ‘Fist of the North Star’ is not for you.

This shonen anime began airing on June 30, 1999, and ended after 43 episodes on September 24, 2000. Tooru Fujisawa is the creator of this masterpiece, and it was serialized from January 1997 to February 2002. It became a colossal hit among the otakus since the first episode. Resulting in several spin-offs, sequels, live-action movies, and even a television series. The series sold and caught 50 million copies in 2007, making it one of the greatest series in history. 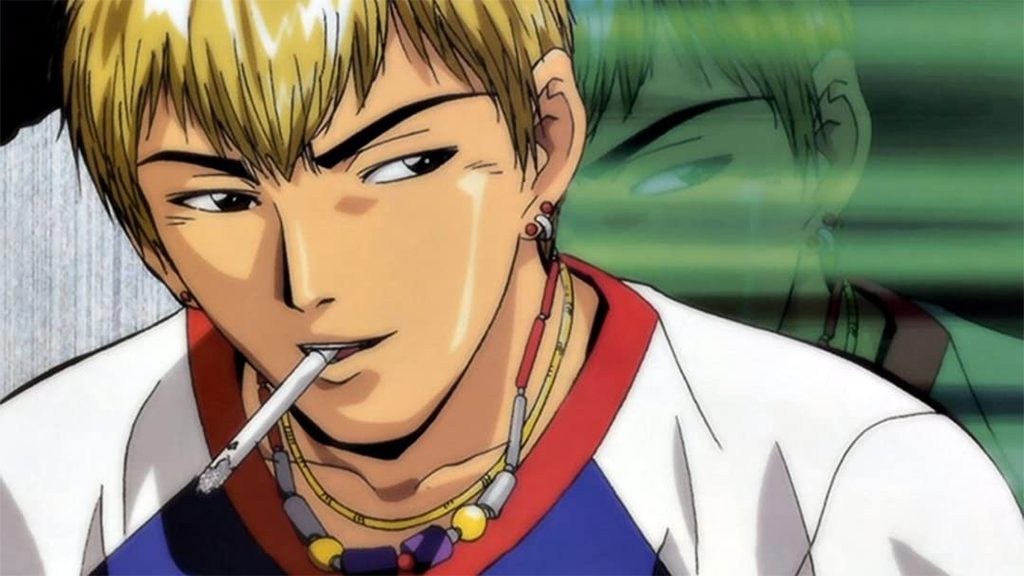 The story revolves around Eikichi Onizuka, a former delinquent who turned into a teacher after a failed date. On that date, he was about to get intimate with the girl when her boyfriend arrived and stops her from getting intimate with Onizuka. On seeing the influence of teachers on girls, he becomes a teacher. However, over time he actually starts enjoying to reach and realizes having a morality to not take advantage of girls. However, Onizuka-sensei can’t control himself around his student’s mothers.

This anime is another classic shonen anime from the 1990s. Yoshihiro Togashi wrote this story, and it began serializing on December 3, 1990, and ended after 19 volumes on July 25, 1994. The Shonen manga became an enormous hit among the teenager, therefore a 122 episodes anime series from October 10, 1992, to December 17, 1994. You can watch this classic series on Hulu or Netflix. 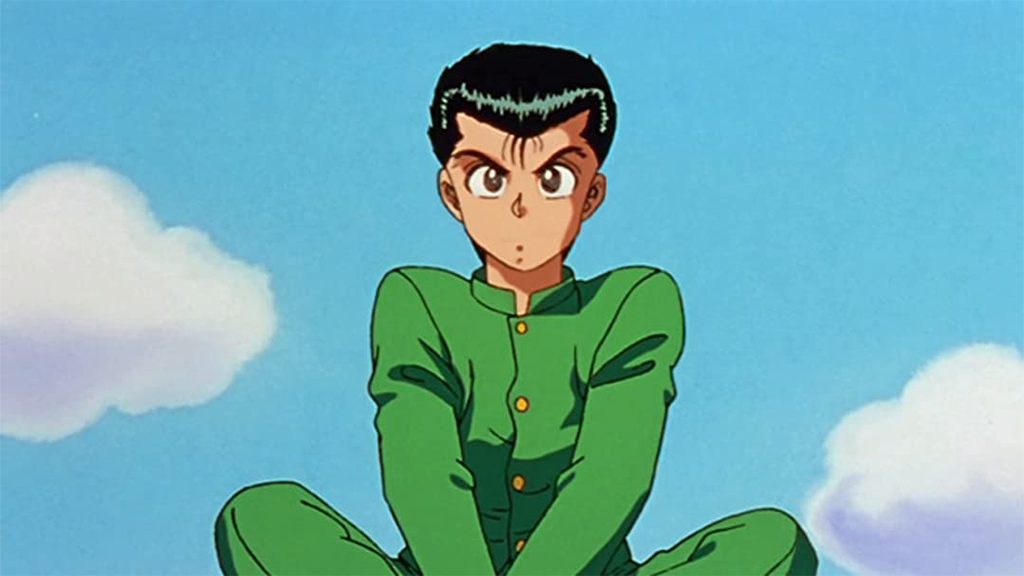 The story revolves around a delinquent, Yusuke Urameshi, who had a tough childhood as his mother was an alcoholic and never gave attention to him. Therefore, he turns into a Street Fighter, and many other delinquents picked on him. Resulting in him being a regular act guidance counselor’s office. However, one day he dies while trying to protect a boy. But upon reaching the afterlife, he gets to know that his death is sudden and got no place in hell or heaven. Thus, Yusuke was revived after passing many tests in the afterlife. Upon his revival, Yusuke was assigned the task of investigating demon cases in the human world. And he does his assignment with the help of his friends from the Demon World, the Human World, and the Spirit World.

This shonen anime began airing on October 11, 1986 and ended after 114 episodes on April 1, 1989. Masami Kurumada wrote the manga series, which was serialized from January 1, 1986, to November 19, 1990, and it has 28 volumes—because of its massive hit, resulting in several spin-offs, sequels, and live-action movies. Even a 3D adaptation came out in 2018 on Netflix, known as Knights of the Zodiac: Saint Seiya. However, you can watch the original series on Netflix and Amazon Prime Videos. 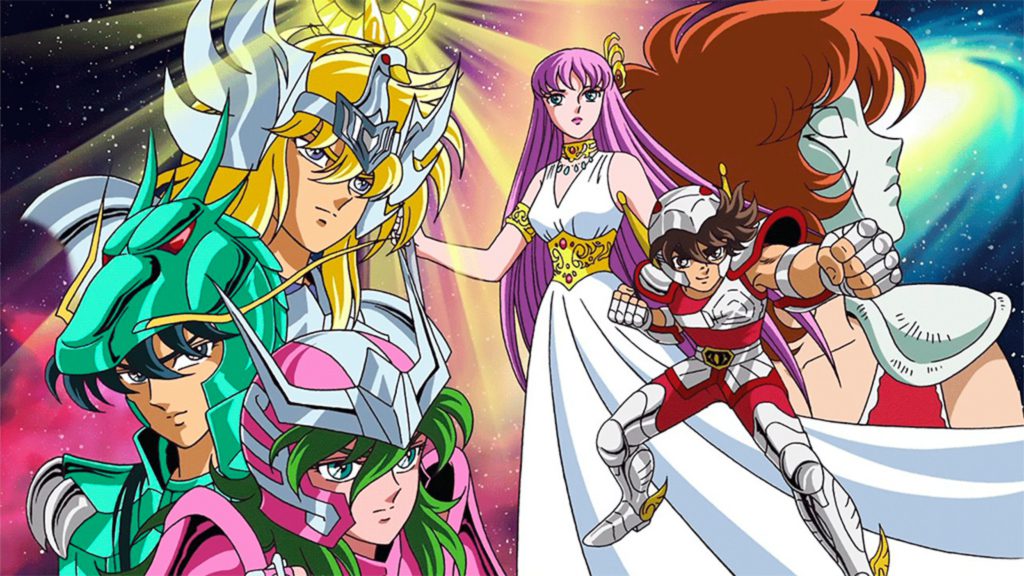 This story revolves around a 13-year-old boy, Seiya, who went to Sanctuary against his wishes to attain the Pegasus Bronze Cloth. The armor is a part of 88 others, which belonged to Goddess Athena’s soldiers. Seiya succeeds in getting his hands on the armor, but upon getting back to Japan, he finds out his elder sister disappeared. Soon Seiya gets to know Saori Kido, who promises him to find his sister. However, Seiya needs to win the most powerful armor, Sagittarius Gold Cloth, from the Galaxian War. On this journey, Seiya faces many tough opponents, whom he takes down with the help of his friends.