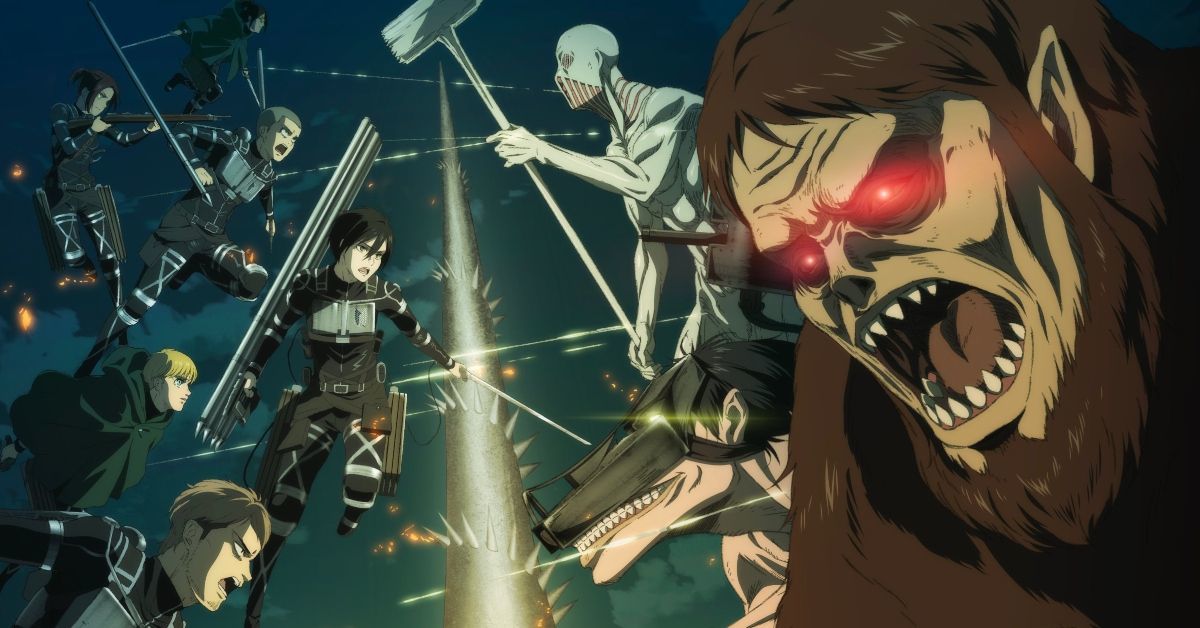 Funimation recently announced its lineup of February 2022 Blu-ray and DVD releases, and it is highlighted by Attack on Titan final season Part 1, Berserk, and some critically acclaimed films like Josee, the Tiger, and the Fish rated highly by viewers. It releases on February 8, 2022, on a Blu-ray for the first time ever, after its release in Cinemas. The movie’s physical release will come in a packaging of a 1 Blue Ray/DVD of an original Japanese soundtrack by Evan Call. It will also feature a variety of things in the Blu-Ray, such as a special interview with the director Tamura Kotaro, unrevealed special footage from the pilot of the film, commercials, promo videos et cetera.

Later, on February 22, a Limited, as well as Standard Edition Blu-ray box set for Attack on Titan Final Season Part 1 will be released. The Limited Edition of Attack on Titan Final Season Part 1 will feature a 32-page digital book with three enamel pins and five art cards. It also has a Voice Actor Panel with Attack on Titan Chibi Theater 1 and 2, Behind the Scenes Footage from Production House of 3DCG Animation and Staff Discussion, Promo Videos, Commercials, Eyecatch Gallery, Textless Opening as well as Closing Songs. Fans are looking forward to this!!

Also Read: Top 10 Trending Anime Songs of 2021 That You Should Check Out

1. By the Grace of the Gods (Season 1) Limited Edition

By the Grace of the Gods Season 1’s limited edition, DVD/Blu-ray contains all 12 episodes of the anime, which is directed by Takeyuki Yanase. Along with the DVD, there is an Art Book containing a light novel, a Puffy slime sticker sheet, Slime-themed glasses cleaning cloth, art cards, Ryoma & Tabuchi’s 4-Panel Video, Textless Opening and Ending Songs, Next Episode Previews, Commercials, Voice Actor Q&A. By the Grace of the Gods (Season 1) Limited Edition is set to release on February 15, 2022.

Summary: Ryoma dies in his sleep and wakes up reincarnated by three deities. He enters into the world of magic, where he researches and takes care of slimes. However, after he heals an injured traveler, Ryoma and his slimes decide to set out to the world and use his power to help others.

The Final Season Part 1 Limited Edition will be released on February 22.  It contains episodes 60-75 of the anime directed by Yuichiro Hayashi. This limited edition also contains a 32-page digital book, three enamel pins and five art cards. It will also have Voice Actor Panel, Attack on Titan Chibi Theater 1 and 2, Behind the Scenes Footage from Production – 3DCG Animation and Staff Discussion, Promo Video, Commercial, Eyecatch Gallery, as well as Textless Opening and Closing Songs.

Summary: It’s already been four years since the Scout Regiment reached the shoreline. The Marleyan people and the world looks very different now. Soon, things are heating up as the fate of the Scout Regiment, and the people of Paradis are determined at last. However, Eren is missing and planning something that will make the world very different!! Will Eren be able to execute his plan? Is his brother Zeke on the Marleyan side or Eldian side?

Attack on Titan Final Season also has a Standard edition which has a Blu-ray, DVD, and Funimation Digital format. It will be available on February 22.

Also Read: Will Yelena Die In Attack On Titan? The Fate Of Yelena Discussed

Adachi and Shimamura: The Complete Season

Summary: Adachi spends her days skipping class until she meets a fellow delinquent named Shimamura, and the two soon become friends. They start to cut class together, deepening their bond but unexpected emotions blossom. The two travel this sea of emotions and learn each other’s feelings.

By the Grace of the Gods (Season 1)

By the Grace of the Gods’ first season consists of Blu-Ray, DVD, and Digital format. Some amazing features are Pre-reincarnation Ryoma & Tabuchi’s Panel Videos, “Slimes’ Idle Conversation,” Voice Actor Q&A, Next Episode Previews, Commercials, Textless Opening as well as Closing Songs. By the Grace of the Gods (Season 1) will be available for pre-ordering on February 15.

Higurashi: When They Cry’s first season’s part 2 consists of Blu-Ray, DVD, and Digital format, which will be available for pre-order on February 8.

Summary: Rural Hinamizawa is a close-knit community with a mysterious history, but it doesn’t stop the locals from welcoming a newcomer. However, something about this village seems to be off. What could be wrong? What are they hiding, and why does fear permeate the air?

Josee, the Tiger and the Fish

Summary: Tsuneo gets a job assisting Josee, who is an artist whose imagination is fantastic. She also uses a wheelchair. However, the tide turns against them, and they start pushing each other to unknown places and inspire a love fit for a storybook.

KING’s RAID: Successors of the Will

King’s Raid: Successors of the Will Part 1 contains 13 episodes of the anime, which is directed by Makoto Hoshino. It has a Blu-ray, DVD, Digital, and CD Soundtrack. It will be available for pre-order on February 15. It also has Commercials, Textless Opening, and Ending Songs.

Summary: After a century of peace in the lands of Orvelia, demons start appearing, and the information reaches the young squire Kasel. He gathers a few people and bands together with a group of companions that embark on a journey to locate the fabled Holy Sword Area and defeat the new enemies.

Summary: Shiroe and his friends’ forging of the Round Table has brought order and prosperity to its people. But fracturing alliances and the menace of the Genius monsters threaten to destroy all they’ve built. Can faith finally be restored, or is destruction certain?

Sleepy Princess in the Demon Castle: The Complete Season

Sleepy Princess in the Demon Castle contains 12 episodes of the anime directed by Mitsue Yamazaki. Sleepy Princess has Blu-ray, DVD, Digital, and CD Soundtrack. It will be available for pre-order on February 1. Some features are Promo Videos, Textless Opening Song, and Textless Closing Song.

Summary: Syalis is a princess, and she’s stuck in a castle full of demons, waiting to be rescued by her knight in shining armor. So what does she do? What any of us would. Take a nap. Duh. 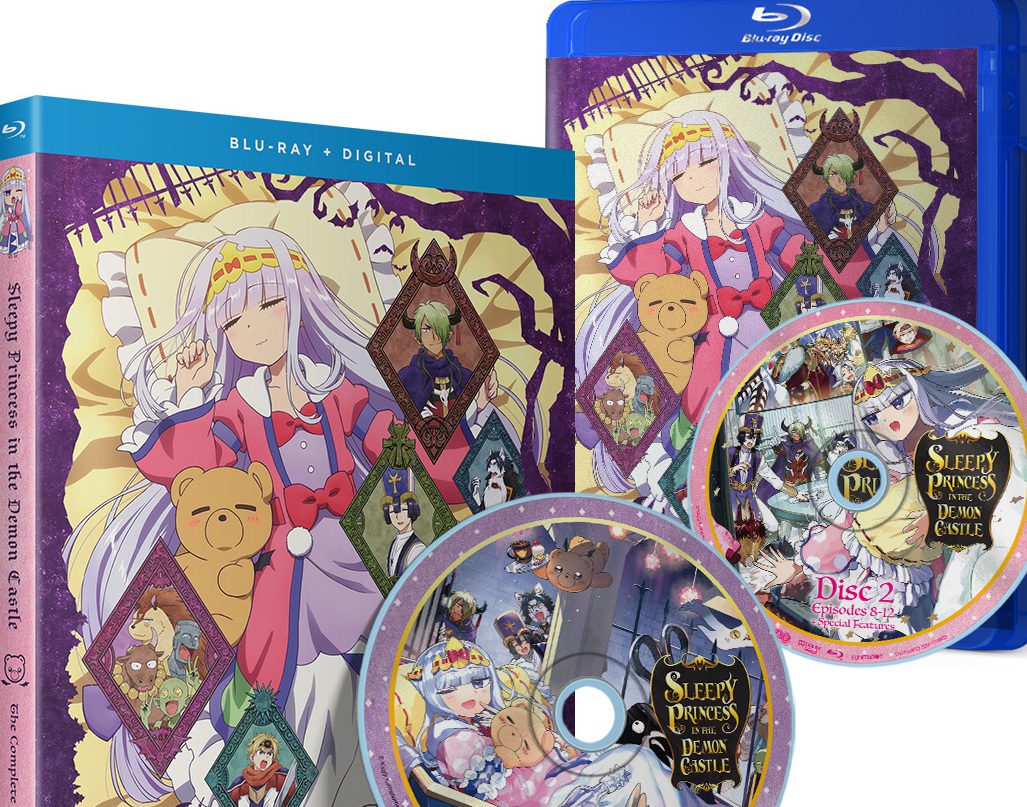 Sleepy Princess in the Demon Castle

Talentless Nana: The Complete Season Blu-ray, DVD, Digital, and CD Soundtrack will be available for pre-order on February 22.

Summary: About 50 years ago, some horrific creatures called the “enemies of humanity” suddenly started appearing around the world. To combat these threats, some teenagers were gifted with supernatural abilities. They hone their powers at an academy on a secluded island. However, Nanao Nakajima is different from the other teenagers on the island. He has no Talent. Just as everyone starts blending as friends, mysterious disappearances begin to threaten the class.

Also Read: Can Noe Retrieve ‘The Book of Vanitas’ in ‘Vanitas No Karte’ Episode 15?

Summary: All of humanity has turned to stone. Now Senku, the genius, woke up from his petrified prison to find Earth in a prehistoric state. Senku is very intelligent, and he is determined to save humanity and begin the rocky road.

Also Read: Will Kitagawa Miran Dress Up as Shizuku-tan in My Dress-Up Darling Episode 4?

Berserk (2016) contains 13 episodes of the 2016 anime which was directed by Shin Itagaki and is available on Blu-ray, DVD, Digital, and CD Soundtrack. It will be released on 15th February. Some features are Episode 12.5, Textless Songs, Promo Videos including Commercials.

Summary: The Black Swordsman roars again when he is branded for death and hunted by demons. He tries to escape his fate and get an act of revenge on the man he once considered a friend.

Dragon Ball Z Kai Season 1 collection, directed by Yasuhiro Nowatari, is available on Blu-ray, DVD, Digital, and CD Soundtrack. It will be released on February 15.

Summary: Goku is the world’s greatest champion who defends humanity against an alien race of warriors called Saiyans. Soon, he accepts himself to be part of them, as he becomes stronger through time.

Katana Maidens: Toji no Miko Essentials contains 24 episodes of the anime directed by Kodai Kakimoto. It is available on Blu-ray, DVD, Digital, and CD Soundtrack. The special features include Textless Opening and Closing Songs and Trailers. It will be released on February 1.

A national competition goes chaotic when shrine maidens Kanami and Hiyori save the day by using their training to team up and discover a powerful secret about the divine materials that make up Toji swords.

My Hero Academia Season 4 contains episodes 64-88 of the anime directed by Kenji Nagasaki. It is available on Blu-ray, DVD, Digital, and CD Soundtrack. Some special features are Justin and Kellen Talk Season 4, Inside the Episode. An Interview with Kaori Nazuka at Anime Expo 2019, FanExpo 2019 Live Dub Panel, and Funimation Con 2020: My Hero Academia Game Show with the Voice Actors. Funimation Con 2020: My Hero Academia Q&A Panel including Textless Opening and Closing Songs. It will be released on February 15.

Summary: As Deku starts his internship, he takes on a mission to take down an underworld organization. In doing so, he aims to save a girl named Eri.

Where to buy these?

All the home videos and merch can be officially bought at the Funimation website.

Also Read: My Hero Academia: Ultra Rumble Battle Royale: The Closed Beta & Everything Else To Know