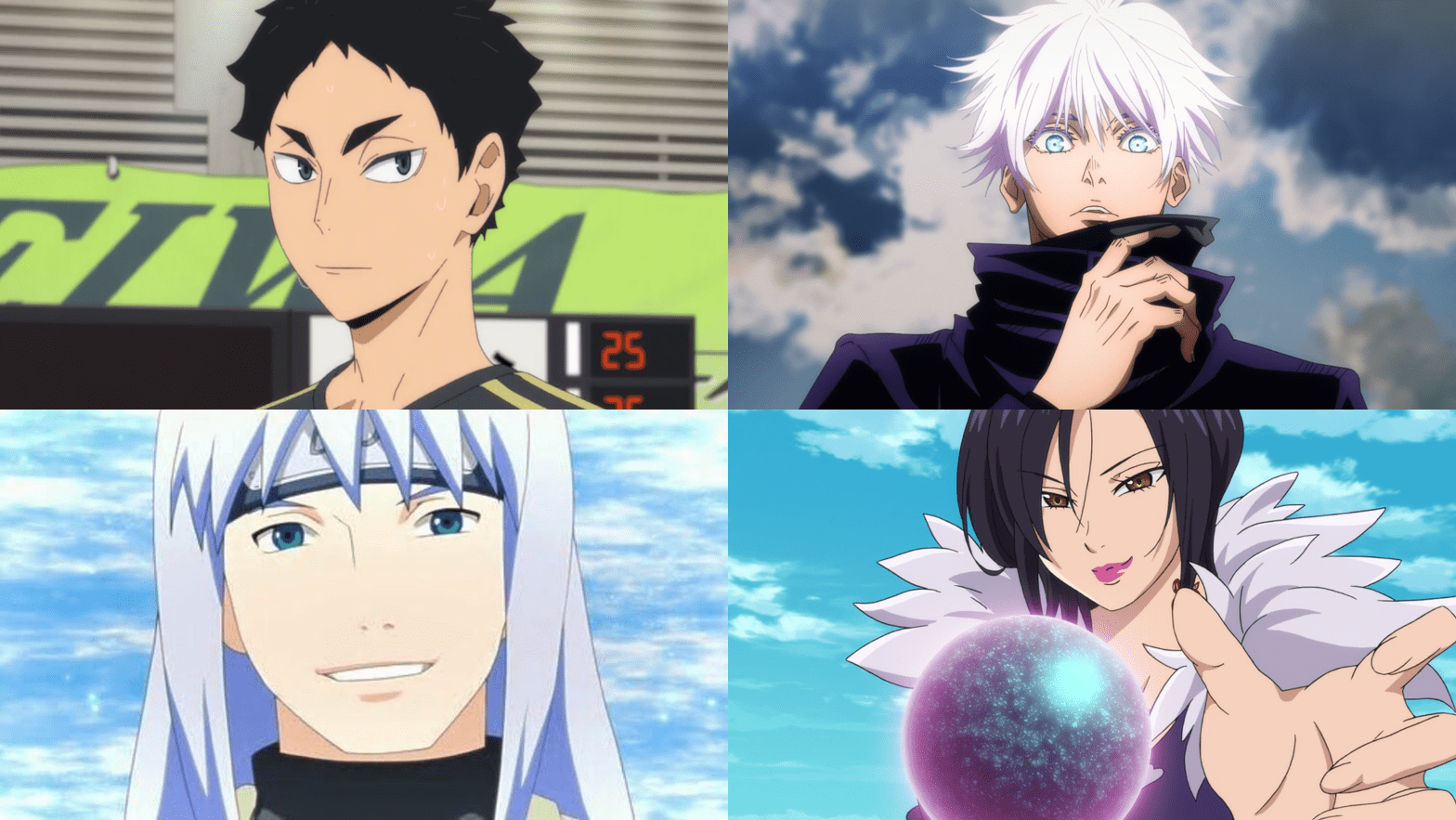 December is a month that consists of 2 Zodiac signs, Sagittarius and Capricorn. As per the former sign, the personalities of these people are usually that of an optimistic, smart and intellectual character. The latter have personalities that resemble people who are disciplined, ambitious, and strong-willed. With a blend of these two in December, it is not a surprise that the anime characters born in December consist of some of the strongest anime characters. From the anime Bleach to Steins;Gate, we have compiled a list of characters who have their birthdays in December.

One of the major villains in the anime Bleach, Ulquiorra Cifer, was born on December 1. Among the 9 Espada, he stands in the 4th position. He is a character who is very detached from things and human emotions; however, he has an interest in questioning these emotions as well as existence as a whole. This nihilistic character looks down on those who are weaker than him in spiritual pressure. Interestingly, Ulquiorra has a separate backstory outside the manga titled “Unmasked”, written for him by Tite Kubo.

Dorami is an adorable character from Doremon. She was “born” on December 2 and is Doraemon’s little sister. Dorami is considered to be stronger than Doraemon. She can produce more energy compared to Doraemon since she was manufactured later than him as an advanced model. Dorami lives with Sewashi Nobi, Nobita’s great-great-grandson in the 22nd Century, and was sent to Nobita in Doraemon’s absence.

Everybody’s favorite not-so-reliable Sensei, Gojo Satoru, blessed us by being born on December 7. He is a character from the anime Jujutsu Kaisen and has risen to fame in the past year. He is one of the most hyped characters, and by watching him, we can understand why. Gojo is also one of the most feared sorcerers in the anime, although he tries not to interfere in some fights as he wants his students to handle their own battles. Although having a laid-back personality but Gojo can get serious when he has to. Of course, he has pretty eyes.

Merlin is a character from Nanatsu no Taizai. She was born on December 3. Like her peers, the other deadly sins, she has been around for more than 3000 years. She is known as the Boar Sin of Gluttony. She is also one of the greatest mages in Britannia who mentors Arthur. Merlin’s character is inspired by the legendary myth of King Arthur and the Kingdom of Camelot. Merlin is seen as an intelligent and calm woman. However, her character is still a mysterious one, and as the story progresses, we know why.

This underrated ninja from Naruto was born on December 4. He was Tsunade’s boyfriend and had a dream of becoming the Hokage. A kindhearted man who loved his village and family, Dan fought alongside Tsunade in the Second Shinobi War. Over here, he took over many shinobis singlehandedly. Sadly, he was fatally wounded and passed away.

Bokuto’s ‘personal assistant’ and the only second-year vice-captain in Fukurodani, Akaashi, was born on December 5. The calm, logical, and quick thinking Akaashi is a setter from the Fukuradani team in the anime Haikyu. He usually appears alongside Bokuto. Although, Akaashi seems like a character who is quiet, he doesn’t shy away from speaking his mind or calling Bokuto’s antics out. Sometimes, he even goes along with Bokuto’s tantrums knowing how to react to each one of them in a precise way. He even made his own guide to Bokuto’s weaknesses.

Dazzling bird-boy Hawks was born on December 28. He plays a crucial role in the anime My Hero Academia. He is usually associated with Endeavor or Endeavor’s son, no, not Shoto (you know if you know). Hawks is considered to be a calm yet provocative bird-person. He is a character who is quick with his thinking. While he appears calm in front of people, he is shown to be anxious most of the time when alone. Hawks is one of the youngest heroes to make it in the top 10 and holds the 2nd position.

Another character from the anime Haikyu, Kageyama Tobio, was born on December 22. He is known as one of the greatest players in Haikyu. Kageyama plays as Karasuno’s setter. His intelligence is confined to volleyball, but he’s a smart character. Although Kageyama isn’t the main protagonist of Haikyu, his presence is important for the protagonist’s growth. Kageyama too undergoes his own growth as he learns how to play as a teammate.

Megumi is probably Kageyama’s twin from another universe. Like Kageyama, he too is born on December 22. Megumi is one of the protagonists from Jujutsu Kaisen. Usually calm, collected, and unbothered, Megumi is actually one of the strongest characters in the series. He is also someone who can take on Gojo in battle. He has a caring personality, even though he wouldn’t show it. If Megumi, Yuuji, Nobara, and Gojo Sensei ever go somewhere together, it would be Megumi who’d be the most responsible one.

Levi was born on December 25, that’s right, on Christmas Day! He is one of the main driving characters of the anime Attack on Titan. Although stern and appearing as a cold-hearted man, Levi has an undying love for his comrades, which he shows subtly. Like other characters in the series, Levi, too, has had a very sad past. Yet, he is one of the bravest characters in the series. He usually knows what he is doing and would probably top the list of Best Captains in the anime world.

The anime My Hero Academia introduces us to Eri as an important character in Season 4. She was born on December 21. Although having a traumatic past, Eri is now trying to experience life in a normal way. However, her quirk is one of the most influential and important quirks in the anime. She usually appears as a shy little girl. However, she likes hanging out with the people who care about her once she is comfortable with them. Sadly, she still has some low self-esteem, but she now knows how to smile.

This mad scientist is the protagonist of the anime Stein; Gate. He was born on December 14. He also calls himself “Hououin Kyouma” and ends his phone calls with the catchphrase “El Psy Kongroo”. Usually appearing as someone crazy, Okabe has a soft side to himself. He truly cares about his friends, which leads him to the main conflict of season 1. Although appearing as someone who does things for fun, Okabe knows when he has to take things seriously.

Misa Amane is one of the important characters from the famous anime Death Note. Like Levi, she was born on December 25th. Misa is seen as a cheerful and bright character. She also has a smart side to her evident from the events that happen in the series. Along with being a determined character with what she wants, she also is very loyal. People may mistake her bubbly personality as someone who is dumb but Misa is not someone to be played with.

A contrast of Misa’s personality is Hinata Hyuga. Hinata is one of the main characters in Naruto. She was born on 27th December. Hinata is seen as a shy girl at the beginning of the series but as the story progresses we notice and see a brave side to her. She is one of the most supportive characters in the series. She also is one of the few people who believed in Naruto’s abilities from the start. Hinata grows up gracefully as she seems to have overcome her shy side.

Demon Slayer’s Nezuko has won many hearts for how cute she can be. She was born on December 28th and is a year younger than her brother Tanjiro. Nezuko is seen as a girl who loves her family. Sadly, after a certain event, things take turn for the worse but it is seen that Nezuko’s love persists for her only remaining family. Although she had to be muzzled and cannot speak, she is still very expressive of how she feels regarding certain things and people.

Also Read: Anime Characters With Birthdays in November – All About Them