Angelina Jolie Spotted With The Weeknd, Duo Seen On A Dinner Date Together! 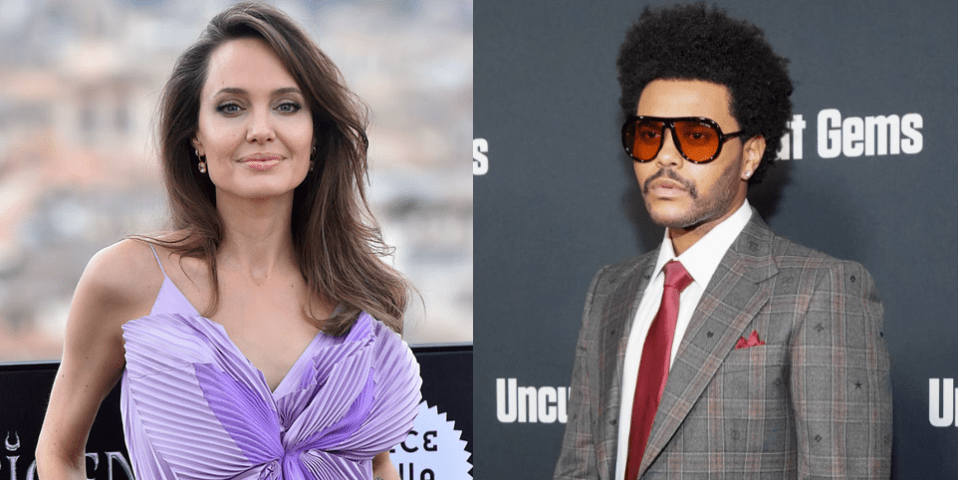 Angelina Jolie and The Weeknd? Now, that’s a pair we never thought we would see. The Hollywood diva and the pop star were recently seen together enjoying dinner together. Spotted in Los Angeles the other day, the duo was swarmed by paparazzi. And with the news out in the town, Jolie and The Weeknd have secured no.1 position on the hot gossip list. Moreover, the fans are wondering if the two are an item. Page Six was the one to drop their pictures from their outing together. None of the stars or their reps have commented on the news. But it is definitely huge.

It looks like Angelina Jolie has changed her mind about staying single. However, there is still a need for hard evidence to prove if the two are linked romantically. Until then, just like the fans, we can assume things. Reportedly, their”dinner date” went for some long hours. We presume if the music pop star was asking for business advice from the mega Hollywood star. As long as the duo is mum, nothing will be clear.

Pictures that have surfaced online are getting a lot of attention from fans. But, the former partners of the two haven’t made any comment. So, what all do we know about the Angelina Jolie and The Weeknd date?

Angelina Jolie and The Weeknd Spotted Having Dinner Together in LA

Page Six spotted the two leaving  Giorgio Baldi in Santa Monica, California, on June 30. According to the information, the two had a “long-hour” hang before they left the place separately. The singer-turned-actor, 31, and the actress, 46, did not leave together to avoid paparazzi and pictures together. However, they still got caught on the camera.

Jolie was spotted wearing a black silk dress and a “beige” trench over it. Meanwhile, Blinding Lights singer was seen in a casual look, with a denim jacket, dark top, and a pair of jeans. A source also informed Page Six that it was not a date but a “Business Meeting.”

A source close to the Weeknd informed the outlet that Weeknd and Angelina Jolie met as the actor wants to get to know the movie business. Indeed, the singer will soon be starring in an HBO series. And that’s the reason why they were not trying to hide their dinner date.

The Weeknd will soon be seen in a new project, The Idol coming on HBO Max. Apart from starring in the series, he will also co-write the show. The Idol will center around the life of a female pop singer who starts a romance with a club owner who is secretly a leader of a cult. Weeknd will also executively produce the show alongside Reza Fahim and Euphoria‘s Sam Levinson.

Look’s like the dinner date wasn’t a romantic outing. However, the real reason behind the date is yet to be out.

While talking on the subject of Weeknd fetching help from Jolie in the movie business, it will be rude not to share their accomplishments. Both Jolie and Weeknd are megastars in their respective fields. Undoubtedly, Jolie has more knowledge of showbiz, considering that she joined the industry way before The Weeknd did.

Angelina Jolie has worked in multiple films. Moreover, she has numerous accolades to her name, including an Academy Award and three Golden Globe Awards. She entered the film business at the age of 16, and three decades later, she is still reigning. With movies like Girl, Interrupted, The Changeling, Gia, A Mighty Heart, The Tourist, First They Killed My Father, and more, Jolie is one of the highest-paid actresses in Hollywood. She is also involved in Humanitarian work and frequently works on social issues. Besides being a great actress, she is also a filmmaker, producer, and writer. She will be next seen in MCU’s Eternals.

As for the Weeknd, he gained popularity after uploading “Do It” on Youtube in 2009. After two years, he founded XO REcords. Since then, he has given the American Music industry some of the biggest hits. Some of his popular tracks are Can’t Feel My Face, The Hills, Blinding lights, Starboy, Save Your Tears, and others. He has released four studios albums in the span of his ongoing career.

Besides singing and producing music, The Weeknd is now inclining towards the movie and television business.

What To Expect From The Devil Judge Episode 1?

UFO: The Declassified Information: What is it About?