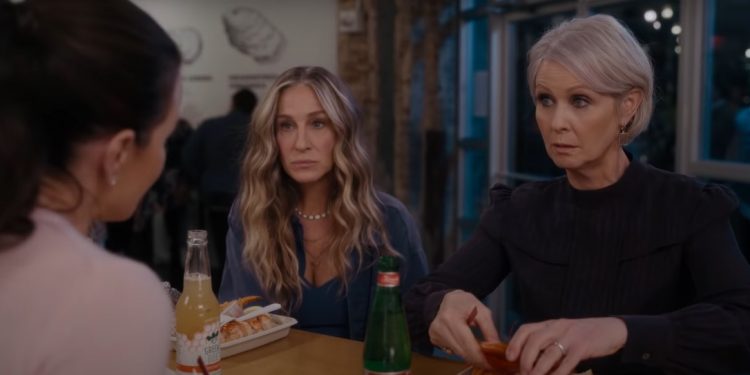 The Sex and the City reboot sees Carrie Bradshaw and her friends go at it again. Firstly, we’re talking about And Just Like That Season 1 Episode 8, the next episode where Carrie finally came to terms with Mr. Big’s death. Secondly, in this series, Carrie and her two friends, now in the fifth decade of their lives, are coping with the fact that they’re no longer as young. And that is full of hilarity in this series.

Just as we see how Carrie finally puts Big’s death behind her, Charlotte has to deal with her daughter’s sexual whims. And Miranda goes out for a fling with a woman after she goes back to school. Be wary of the spoilers in this article. Now that we got that out of the way, lt’s begin covering what’s up with the Sex and the City girls in the next And Just like That episode here at Otakukart!

Carrie is typing at her desk when the episode begins. As the seasons change, it becomes clear that Carrie is working on a novel. Carrie’s suspicions are confirmed when she meets her editor, Amanda, who tells her that her book made her cry. ‘Loved & Lost,’ Carrie’s memoir, delves into her life with Mr. Big and the traumatic aftermath of his death. Despite being impressed by the book, Amanda believes it lacks “an element of hope.” As a result, she invites Carrie out on a date and asks her to write an epilogue explaining that she (and thus her readers) might find love again.

Miranda runs into Nya and Andre at the market. As Nya introduces Andre to Miranda, the older woman notices the young couple’s incredible chemistry. Nya confesses to Miranda that she is upset because she isn’t pregnant and has gotten her period. When Steve finally arrives, befuddled and slightly irritated, it’s clear that Miranda’s marriage is in trouble.

Miranda & Carrie Have A Chat

Carrie runs into Amanda again and expresses her concern about her book after seeing the cover design suggestions. In other words, she believes she needed to write the book for herself rather than for the rest of the world. Amanda dismisses her concerns, claiming that the possibility of an epilogue piqued Oprah’s Book Club’s interest in her book. Carrie later tells Seema, Charlotte, and Miranda that she’s going on a date for the sake of her editor. Seema then reveals that she has created a dating app account for Carrie. Carrie and Miranda later discuss their sex lives. Carrie says she isn’t comfortable having sex with anyone other than Mr. Big, while Miranda reveals that her romance with Steve is over. We also learn that Che has yet to respond to Miranda’s three-month-old direct message.

Simply tune in to HBO during the broadcast time to see “And Just Like That.” You can also connect to any HBO online platform, such as HBO Go or HBO Max. Because “And Just Like That” is a Home Box Office exclusive, you won’t find it on any other platform. HBO, fortunately, is a globally accessible platform with ample variety of original shows, series, movies, and a rotating catalog of features from the best of Hollywood cinema available as an add-on in streaming platforms like Amazon Prime Video or Hulu or as a separate package with a wide variety of original shows, movies, and a constantly shifting catalog of features from the best of Hollywood for a very accessible price.

And Just Like That Season 1 Episode 8 will release on January 20, 2022, on HBO at 03:00 hrs Eastern Time, United States on HBO. This episode will be directed by Anu Valia out of a script penned by Rachna Fruchbom. The episode’s title is “Bewitched, Bothered and Bewildered”. With this, we conclude our coverage of “And Just Like That” here at Otakukart. Thanks for reading our article, and please keep returning to our website to stay in the loop on all your favorite series, movies, and shows.

Also Read: Who is Cynthia Nixon’s Wife? Love Life of ‘Sex and the City’ Actress