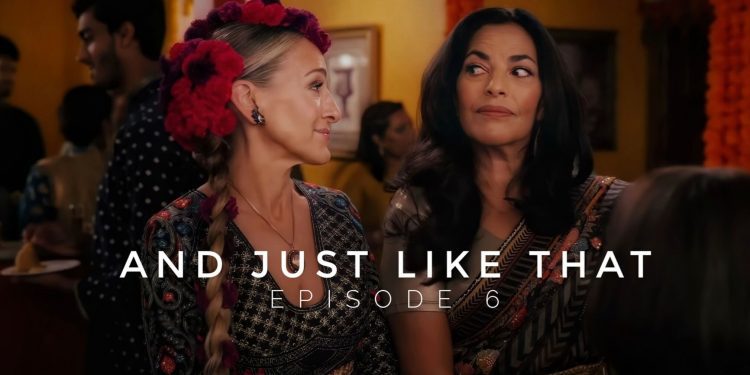 'And Just Like That' episode 6 will premiere on HBO Max

“And Just Like That” episode 6 will be set around the Hindu festival of Diwali. The official synopsis suggests that Carrie is finally ready to step into her new life. The past few episodes have seen her struggling to contend with Big’s passing. However, with the help of her besties and a new friend in Seema, Carrie is back on her feet. It seems that we’ll be seeing a lot of Seema. Especially in the upcoming episode, where Seema will teach Carrie a thing or two about her culture and also introduce her to her family.

Meanwhile, the official promo sheds some light on Miranda’s continuous exploration of her sexual identity. After the last episode where Carrie witnessed Miranda and Che’s intense steamy session, it seems that Miranda is only going to get more open about her new sexual endeavors and embrace her blooming relationship with Che. However, what does this mean for her marriage? Will she decide to call it quits or soon realize that her fling is purely sexual and transient? We’ll have to wait and see how Miranda’s storyline takes shape moving forward.

Let’s now delve into all that episode 6 of “And Just Like That” will entail. Spoilers for episodes 5 and 6 ahead!

Episode 5 opens with Carrie walking upstairs with the aid of an umbrella that acts as a walking stick. She’s having a back problem, and Seema immediately suggests an orthopedic doctor. Carrie claims it to be just a sign of old age. However, the doctor reveals that Carrie has a congenital birth defect. Carrie is surprised, both at learning that she has a birth defect and that she’s not old yet. Later, Carrie shares the news with Charlotte, Miranda, and Anthony, who’s slowly trying to participate in the inner circle more. Charlotte and Miranda decide to help Carrie out through her recovery following her hip surgery. They do a great job at that, including Anthony, who also gives his best. However, during one of her support shifts, Miranda answers the door to Che, who’s come by with a bottle of tequila.

Miranda & Che Turn the Heat Up

While Carrie is sleeping, Miranda and Che help themselves with tequila shots. Miranda then asks Che for another weed smoking session. The shotgun that Che gives instantly turns into a steamy and intense making-out sequence. While Miranda is having the best sexual experience of her life she has had so far, Carrie wakes up, and after trying to call out for Miranda, seeing her making out with Che, and then peeing in a bottle with a great deal of struggle and maneuvering, Carrie spills it all on her sheets. Che leaves, and Miranda recovers from the sexual whiplash. Carrie confronts Miranda, who keeps avoiding the topic until she doesn’t. Miranda then confesses to Carrie just how vanilla and unsatisfactory her sexual life has been.

Meanwhile, Charlotte gets a surprise when she learns Rose has changed her name to “Rock”. She and Harry meet with Rose’s teachers to discuss the issue. Charlotte confronts Rose about it, and they tell her that they did do a TikTok about it. Harry and Charlotte raise their concerns over the fact that they weren’t made aware of it. The teachers tell them it all depends on the child and continuously keep correcting Harry over Rock’s preferred pronouns. After the meeting, Harry and Charlotte are still not fully onboard with Rock’s identity. Harry still thinks it’s just a phase. Carrie books an appointment with a hot physiotherapist out of her own pocket. The episode ends with her back to wearing heels after a full recovery.

“And Just Like That” episode 6 will release on HBO Max on January 6, 2022, at 3:00 a.m. ET. It will celebrate Carrie’s venture into a fresh start. As the title suggests, the episode will be set during the Hindu festival of Diwali. It seems that the realtor-turned-friend Seema Patel is here to stay and become a prominent part of the show’s cast and potentially even Carrie’s friend circle. While Seema will introduce Carrie to the festival and her family, Carrie’s new leap for her future will serve as the central focus in the next episode. The official promo for episode 6 starts with Carrie taking a tour of a high-rise apartment downtown. “I’ve had fun downtown, and I’ve cried downtown, but I’ve never lived downtown,” says Carrie.

The trailer suggests Carrie is ready to move on and start afresh. The last few episodes have shown her make significant progress in terms of contending with Big’s loss. It seems that she has finally understood that she can’t dwell in the past forever. She tells Charlotte and Miranda that too. So the next chapter has some big makeovers and life changes for Carrie. Meanwhile, Miranda’s extra-marital fling with Che is getting progressively steamier. After the last episode, it seems Miranda is ready to be open about it. The official promo shows her breaking this news to Charlotte, who will be understandably surprised as well. Meanwhile, episode 6 will also see Anthony ask Carrie for a favor.

Watch ‘And Just Like That’ Episode 6 Online — Streaming Details

“And Just Like That” episode 6 will release on HBO Max on January 6, 2022, at 3:00 a.m. ET. New episodes drop on Thursdays every week on the streamer. Viewers can watch “Ans Just Like That” online on HBO Max or any other streaming platform in affiliation with the streamer. Hulu with the HBO add-on is one such example that you can tune in to binge the show. You can stream the show online via HBO’s official website or HBO Max without an extra subscription as well. All you need to start streaming are your cable login details.

Who is Harry Jowsey Dating in 2022? The Television Star Makes A Shocking Revelation About His Career!