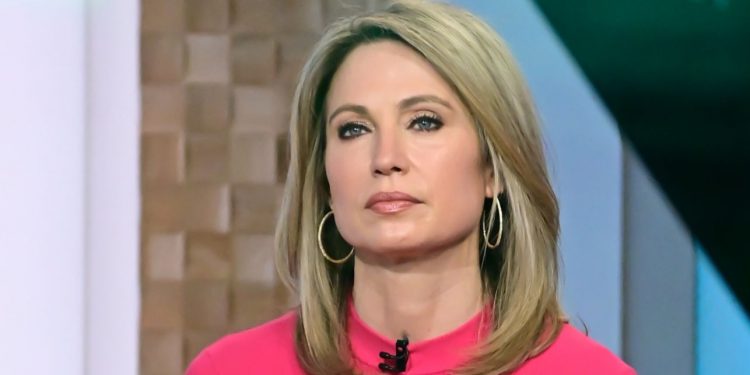 Amy Joanne Robach is a famous American television journalist who has worked as an anchor for Good Morning America News for ABC News. Amy Robach was welcomed to this world on February 6, 1973, in East Lansing, Michigan, USA. She spent half of her childhood life in St. Louis, Missouri, and the next nine years in Georgia. She survived breast cancer and took the viewers of her program through a mammography process to raise awareness of a wide disease, which is the most commonly diagnosed cancer in American women after skin cancer. Amy started her broadcasting career as a reporter on general assignment with WCBD-TV. After working for WTTG-TV for four years, Amy moved to NBC News, where Robach worked for nine years. Do you know what Amy Robach’s Net Worth is?

As a national correspondent for popular NBC News, she had also co-hosted the Saturday edition of NBC’s Today and anchor on MSNBC. From NBC News, Robach headed to ABC News. She was originally a correspondent for ABC’s Good Morning America and gradually worked her way up the ladder to become the host of the show. Recognized by Regardie’s magazine as one of Washington’s 100 Most Influential Citizens, Amy was unexpectedly diagnosed with breast cancer, which ruined her life. Although her family supported her throughout, she revealed in an interview that the shock of being diagnosed with breast cancer had caused “great ups and downs” in her married life. And, finally, through therapy, she and her husband were finally able to save the relationship.

What is Amy Robach’s Net Worth? Amy Robach, the well-known American journalist, had amassed a net worth of approximately $10 million and an annual salary of $1 million. She collected this amount from her successful journalistic career. She co-hosted GMA3: What You Need to Know by ABC News, a daily program that brings viewers the latest news, information, and stories about human interest. It should be noted that more than half of her net worth is attributed to her husband named Andrew Shue, who is a successful internet personality, entrepreneur, and former actor. Amy Robach was the third runner-up in the Miss Georgia competition in the year 1994. That year she won the Miss Grinnet County title.

Recently, on Tuesday of October 26, 2021, Amy Robach and Andrew Shue delighted their fans with the news of their book being published. Their long-awaited book, Better Together, had been released. This children’s book was the couple’s first joint project. This book is inspired by the mix of the whole family. She came up with a photo of the whole family, in which Amy and Andrew pose with their five children and look very close.

How Did Amy Robach Make Her Fortune?

Robach started her career with WCBD in the year 1995. In the year 1999, she left the network and started working for WTTG in Washington, DC. And, In the year 2003, she moved to NBC News, where she worked for nine years. During her nine years at NBC, Robach interviewed important political figures, including Barack Obama in 2004, Senator John McCain, President Nancy Pelosi, and President Newt Gingrich. She had also interviewed Israeli Prime Minister Benjamin Netanyahu. Amy then joined MSNBC in 2003, where she hosted the two-hour morning show for nearly four years and worked on the countdown show with Keith Olberman and Morning Joe.

She also hosted Weekend Today, which premiered on television in July 2007. Her last day on the show was in May 2012 when she publicly announced that she would be taking on ABC News. Robach originally appeared as a correspondent for Good Morning America. She then became an ABC news anchor in the year 2014. In the year 2018, she started anchoring 20/20. In March 2020, she then hosted ABC’s “Pandemic: What You Need To Know,” which is a daily program. She then went on to host GMA3: What You Need to Know, which continued to replace Strahan, Sarah, and Keke.

In November 2013, Amy Robach announced on Good Morning America that she had been diagnosed with dangerous breast cancer. Prior to this serious announcement, on October 1, 2013, she had a mammogram on live television. She took a short break from radiation to undergo a bilateral mastectomy. The cancer was classified as Stage IIB because doctors found a second malignant tumor in her other breast during surgery, indicating that cancer had spread to her lymph nodes. She underwent eight cycles of chemotherapy, radiation, and reconstruction. And finally, she became healthy and cancer-free in the year 2017.