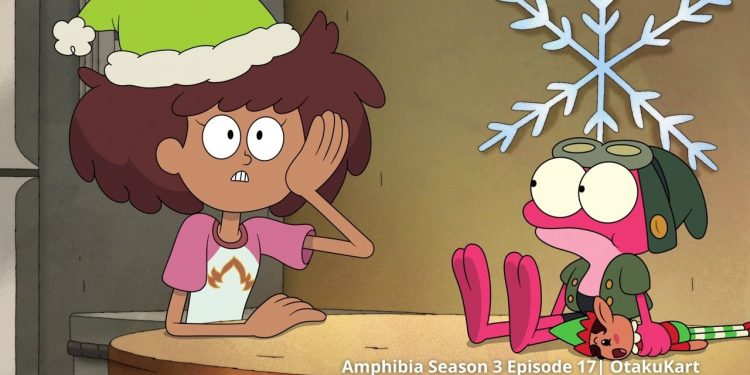 Amphibia Season 3 Episode 17 may see King Andrias taking a backseat and letting the new evil Marcy work things out. While Anne wants to return to Amphibia to save the place, King Andrias wants to break the barrier and enter the other worlds to rule them. The New Marcy with Amphibia’s best brains could help him a lot after his numerous failed expeditions. Especially with Marcy taking note of the recent stunt he tried to pull off on Christmas.

So King Andrias’ soldiers gifted him a drone soldier prototype that he can use to crossover into the human world. Therefore hunt for Anne and finish her once and for all. Anne on the other hand didn’t see it coming. She was busy preparing for Christmas and also to fulfill one of her mother’s dreams. Sprig, Polly, and Hop Pop on their side were busy understanding this holiday. Here is a quick look at what went down.

Previously on Amphibia Season 3, Christmas celebrations were in the air. As excited as Anne and her family were, the Frogs were busy trying to figure out what the celebrations are all about. More exciting news popped in the form of the Downtown LA Christmapalooza Parade. The parade this year had one spot to fill in. Now it seems like Anne’s mother’s dream of joining the parade was coming true. The only thing was she can’t risk going out with the frogs in the parade. It’s definitely not lowkey. With the likes of King Andrias and Mr. X hunting them, no chance.

Anne realizes the worry of her mother but she can’t help but notice the little kid behind it. Somewhere Mrs. Boonchuy wanted to be part of this parade. This leads her to plan that she will take her for parade one way or another. Meanwhile, back in Amphibia, King Andrias receives a drone soldier prototype which is impressive. Instead of going into the human world himself, King Andrias plans to send this little prototype and hunt down Anne virtually.

While Anne gets everything she needs for the parade, the frogs are still trying to figure out what Christmas is all about. They come across the idea that it is probably about gifting each other and giving them joy. Anne surprises her mother. Mr. Boonchuy on his side spends time trying to capture the best family picture possible.

Towards the end of the episode, Anne takes her family for the Christmapalooza Parade. Only to be attacked by King Andrias’ Santa Robot. By using a Christmas tree as a missile, the family manages to defeat King Andrias. Anne, though she ruined Christmas that’s when her mother teaches her a lesson and for the frogs as well. Christmas isn’t about gifts, but spending time with people you love.

From what we see in this season so far, Amphibia Season 3 Episode 17 may continue to see Sprig, Polly, and Hop Pop struggling in the human world. As they try to fit in keep their identities secret which was exposed once or twice. Anne on the other hand may spend time to figure out a way to get back to Amphibia, probably with a little help from Dr. Jan. Lastly, we are yet to see the wrath of new Marcy that King Andrias has created with Amphibia’s best brains.

Amphibia Season 3 Episode 17 may not be airing anytime soon. Until then, you can stream the rest of Amphibia Season 3 on Disney+ and Disney Now with video-on-demand services of Amazon Prime Video, Microsoft, iTunes, YouTube TV, and Google Play Movies & TV offering the same to buy and rent.