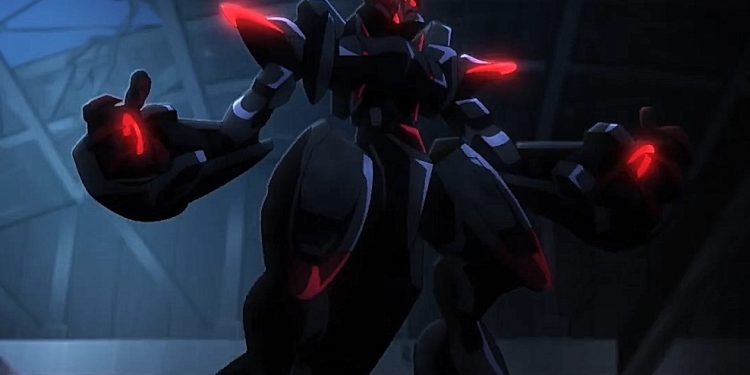 AMAIM Warrior at the Borderline Episode 13

AMAIM Warrior at the Borderline Episode 13 reveals the last showdown between Ghost and AMAIMs. The Japanese Army sends soldiers to face the enemy at the tunnel. They thought that there was no one, but AMAIM Ghost appeared out of nowhere and began to kill the soldiers. Ghost assassin three platoons and the soldiers report to the HQ. But they were surprised how Ghost appeared since their radar told them that there was no enemy. In the recent episode of AMAIM Warrior at the Borderline, the soldiers inside the control room lose sight of Ghost and wonder how Ghost vanished.

The control room exploded, and those two soldiers died after Ghost attacked them. The boss from the Resistance Organization learned that Ghost was rampaging last night. Tezuko and Amou received information from one of the NAC survivors. They decided to investigate the case, and Tezuka reveals that he wants to defeat Ghost since he has scores to settle with him. Tezuka reminds Amou and Shion that Ghost killed his father and must avenge his father. The boss asks Amou what he will do, and Amou realizes that Ghost also killed Ms. Risa, and when he attacked the camp, he was there.

But he couldn’t do anything, and no one knows who Ghost’s next victim is, and they must stop him. Amou reveals that he will help Tezuka fight with Ghost. Later after the meeting, Tezuka goes to training and realizes that he has to pass the training with flying colors since Ghost is a potent opponent who needs a well-prepared guy to face him. Maki arrives and wonders how long it will take for Tezuka to stop training since he has been there for hours. Shion practice making pottery pieces since she has goals to open Mino Ware.

Previously on AMAIM Warrior at the Borderline Episode 12

A few days ago, Kiryu Udo and Goken Kumai revealed Ghost in the Oki Islands. But the island is under the control of the Asian Military, and Ghosts have destroyed a few islands but continue to stay hidden in the dark. During the battle, the Asian Military notice that they have no match against Ghost and retreat before they all get killed. But Ghost has remained calm after his previous battle with Asiam Military. Yashin believes Ghost is in sleep mode, but he will start another war when he fully recharges.

Udo talks about the citizens of Japan and those living in quarters of Nishinoshima who were left behind. Kai and Yashin reveal that the Asian Military abandoned the Japanese people to save their lives. Udo realizes that a Ghost can do anything when he wakes up, and they must be prepared for that. Shion suggests helping the citizens, and Udo says they will defeat Ghost and end it. Udo realizes that Shion will be facing Ghost for the first time. But she will be okay since Amou and Tezuka have shared their Ghost experience with her.

Udo told the team that their mission was to rescue the people in Nishioshima and take Ghost down.  After a few days, Tezuka, Amou, and Shion wield their AMAIM and realize that they have to stick to their formation. Kumai talks with the soldiers using guns and reminds them that it will be a two-way war. They must protect the citizens and avoid the Asian Military. He knows that the Asian Military considers them terrorists. Amou, Shion, and Tezuka will fight Ghost while the others care for Ghost allies and protect the citizens.

AMAIM Warrior at the Borderline Episode 13 will be released on 28 December 2021. Udo reveals that his team will rescue people. Amou, Tezuka, and Shion will use the outside entrance to infiltrate Nishinoshima. Later the soldiers arrive at the battlefield and face the enemies. Ghost wakes up after recharging and appears in the forest, where he attacks the soldiers. The trio joins the battle and tries to take Ghost down. Let’s look at AMAIM Warrior at the Borderline Episode 13 official details.

Is Kimmi Grant Married? A Deep Dive through her Personal Life!