All the Dispatch Couples Revealed on Every New Year’s Day!

Every new year bring with it Dispatch's shocking couple reveals who have been secretly dating. Let's find out the ones who have been exposed over the years! 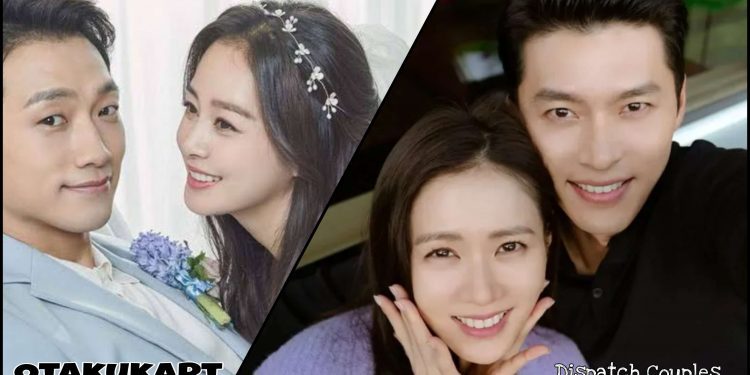 The new year brings with it whole new energy and vibe and opportunities that inspire us to work on new goals. Okay, that was pretty unusual for a Korean gossip article! Some of us just wait for the new year looking forward to which new shocking relationship or couple will be exposed by tabloid Dispatch. As you know, when it comes to trusting dating rumors of K-celebrities, Dispatch is a reliable source second to none. It has been a tradition for them to expose one Korean celeb couple on the very first day of the new year. This makes one want to look back at all the couples exposed by Dispatch. They are like South Korea’s undercover agents who make sure to provide enough evidence for their statements with photos and video clips of the said couple together! Well, that leaves us with no choice but to believe their words.

The tradition is being performed almost every year since 2008, excluding a few exceptions. Let’s find out which star couples have been revealed by Dispatch since then and what is their relationship status now!

This was the first time Dispatch disclosed a couple’s relationship on New Year while the tradition of it continues. The couple fell in love with each other while working together on the sets of KBS2 TV’s Heroine 6 in 2006. However, they were going through a troubled relationship, and the public scrutiny on them was making him feel pressured. They kept denying the rumors in front of the paparazzi for months until they confirmed their break up in 2009 eventually.

The ‘Beauty and the Beast” couple of South Korea’s showbiz, Kim Hye Soo and Yoo Hae Jin, became a hot topic of discussion when they made their relationship public after Dispatch’s new year’s reveal. However, the two ended their relationship on good terms because of public pressure in 2011, when they got pretty busy with their work. However, they have always been respectful and comfortable around each other, as observed in the award ceremonies where they look happy to hug and greet each other.

Recently, Yoo Hae Jin and the cult actress Kim Hye Soo reunited for a magazine photoshoot in order to celebrate Tazza’s 15th anniversary. Well, it feels good to see the ex-lovers get along with each other so well despite parting ways.

The tradition was put on hold in 2012 because of Dispatch’s hiatus. So, we didn’t get to know about any new couple that year, but they made up to us the following year when they revealed that one of Korea’s most popular and highest-paid singers, Rain and the nation’s beauty queen actress Kim Tae Hee has been dating. The two heartthrobs met each other on the sets of Coupang’s commercial shoot in 2011, and the singer quickly fell in love with her. However, it took him almost a year to win her affections since, to her, he was just an ordinary suitor.

Kim Tae Hee comes from a wealthy family, has the looks as well as talent as an actress. So, it wouldn’t have been hard for her to get married into a chaebol family. However, Rain’s sincerity made her fall for him, and the couple ended up tying knots in 2017 after almost five years of dating! Romantic, isn’t it! The couple welcomed their first child in the same year and the second in 2019— blessed with two beautiful daughters.

The couple’s relationship was revealed on January 1, 2014, while they had been dating since September 2013. The two met each other in 2007 when their career just began. The K-pop girl group of which Yoona was a part, SNSD had just made their debut while Lee Seung-gi was a newbie singer. However, they had several encounters after that on music shows, variety shows like ‘Happiness,’ and award events.

Their agencies confirmed the dating rumors, and it hardly took any time when everyone started calling them an ideal couple. Not only did they look great together, but they also had similar nature and mannerisms. Their down-to-earth personalities and kind and humble nature made everyone admire them. However, the couple ended up parting ways by August next year but stated that they are still friends and support each other as colleagues.

Also Read: K-Pop Predictions 2022: What can we Expect from the New Year?

Squid Game star Lee Jung Jae is still happily together with Daesang Group’s vice chairwoman, Lim Se Ryung, whose relationship revelation was done by Dispatch again. The two love birds were caught hanging out with each other at a restaurant in 2015. They have known each other for a long time after they were introduced in 2005 through an acquaintance and had been close friends.

The media questioned their relationship many times in 2010 and 2012, but the actor confirmed that they started dating only in 2015. He openly confessed that he wanted to protect Lim Se Ryung from all the media attention, especially since she is a mother of two children and didn’t want her family’s privacy to be violated.

The former TVXQ member Junsu and Hani from EXID were exposed as the 2016 New Year Couple by Dispatch. Junsu used to be a fan of Hani as he was caught watching a video of hers, and it was then that Lee Dong-hee introduced him to her. The seeds of affection soon emerged between the two and were captured on camera while they were hanging out together by the Han river.

After the Dispatch reveals, both the idols confirmed the dating rumors, but it didn’t take long for them to drift apart owing to their clash in working schedules. Although many assumptions had been made about the real reason behind their breakup, we aren’t sure about any of them except that the post-breakup relationship between them didn’t seem to go well.

Dispatch didn’t reveal the relationship of any couple in the new year of 2017 because of a public scandal involving South Korea’s former President, Park Geun-Hye. However, they surprised everyone with the dating news of Big Bang’s G-Dragon and the former member of After School, Lee Joo Yeon, the next year! The rumors began to circulate back in 2016 when the netizens found a striking resemblance to the backgrounds of their pictures on social media, posted on their respective accounts. However, since the agencies of both parties did not address the rumors, they eventually died down.

The flames reignited in 2018 again when videos from the dubbing app ‘Kwai’ from Lee Joo Yeon’s account went viral. However, all the rumors were shut by their agencies, leaving the fans unsatisfied with vague answers.

Jennie from one of South Korea’s biggest girl groups, BLACKPINK,, and the world-class performer Kai from EXO were revealed to be dating in 2019— Can you imagine the star power! Kai’s reps confirmed the news after Dispatch made its reveal. However, people have already been speculating their relationship as they were seen together multiple times from October 2018. It was also believed that the two went on a vacation to Paris together when both of them posted pictures with Eiffel Tower on their social media within a one-day gap.

Unfortunately, the couple broke up pretty soon, and the reason for the same was busy working schedules. We wonder if that’s really true since reports stated that they went through an ugly breakup.

There’s wasn’t any Dispatch reveal of couples in 2020 because of the COVID-19 pandemic. The tradition continued in 2021 with the glamorous on-screen couple from the 2019 K-drama, ‘Crash Landing on You’— Hyun Bin and Son Ye Jin. The two have been co-stars before as well in the 2011 rom-com K-drama ‘Secret Garden,’ but by the time the filming of their second project together ended, the two affirmed their feelings for each other and got together in early 2020.

The agencies confirmed the news and requested the fans to support them and cheer for them. Recently, the news of their engagement has been all over the internet as they are rumored to get married soon. If that really happens, fans are definitely going to rejoice at this!

Also Read: Male K-pop Idols Who have Appeared on TC Candler’s List of ‘100 Most Handsome Faces’ in 2021

Lee Seong Gye Accepts His Fate And Sits On The Throne In ‘The King Of Tears, Lee Bang Won’ Episode 9