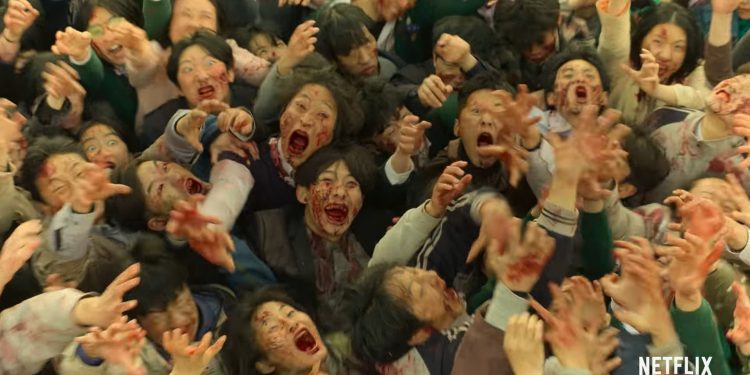 All of Us Are Dead

‘All of Us Are Dead’ is a zombie apocalypse drama by Netflix that is set for a late January premiere. With the rise in popularity of apocalyptical and dystopian drama’s, Netflix has kept its streamers filled with back-to-back hits like ‘Sweet Home’ and ‘Hellbound’. These dramas have a fanbase of their own, which has led to ‘All of Us Are Dead’ becoming a much-awaited drama. The piece is based on a webtoon ‘Now At Our School’. This drama is set in a high school, where the students find themselves stuck in the premises as a deadly virus breaks out. Directed by Lee Jaegyoo, many are anticipating it due to his success with dramas like ‘Beethoven Virus’ and ‘King2Hearts’.

‘All of Us Are Dead’ stars Yoon Chan Young, Park Ji Hoo, Cho Yi Hyun, Park Solomon, and Yoo In Soo. There are heavy expectations placed on this drama as many people who read the webtoon it is based on will be tuning in. Most fans are eager to know the extent of similarity between both and if the screen adaption will do the webtoon justice.

Also Read: Han Ji Min’s Take on Her Next Movie ‘A Year-End Medley’

‘All of Us Are Dead’: Release Date and Episode Schedule

The zombie series will be released on 28 January 2022. As it is a Netflix original, the fans won’t have to wait a week for new episodes. Much to the fans excitement, all the episodes will be released at once. The series will span over 8 to 12 episodes. The average running time of each episode will be around 42 minutes. Due to the violence in the drama, it is rated 18 and above. The hit webtoon was released in 2009, so many old fans are happy to see the drama adaption. They’re all looking forward to this series that will bring with it a good chunk of nostalgia. Are you ready for this drama that will take you through bloody classrooms, friendships, and fights? Fasten your seatbelts because it looks like it will be one hell of an adventurous ride.

Streaming Details for ‘All of Us Are Dead’

As a Netflix Original, the drama is exclusively available to stream on Netflix. The teasers and trailers that have been uploaded to date have shown us a bloodied school, with students struggling to survive as the virus spreads everywhere around them.

All of Us Are Dead shows us how the students at Hyosan High School react to a deadly virus outbreak that sweeps over the institution and outside. The trailers have shown us that the students struggle to make it out and how their calls for help are ignored due to the unreality and strangeness of the situation. The drama has an eye-catching cast. Yoon Chanyoung, Park Jihoo, Park Solomon, Yoo Insoo, and Jo Yihyun play Lee Cheongsan, Nam Ohnjo, Lee Suhyuk, Yoon Gwinam, and Choi Namra, respectively. Yoon Chanyoung is a well-known name amongst K-drama fans. He has played the younger version of male lead actors in many K-drama’s over the years like Thirty but Seventeen and Dr. Romantic. His wonderful performance in works like Nobody Knows,  Doctor John, and Everything and Nothing gained him many fans. Park Jihoo made a name for herself by starring as Eunhee in the critically acclaimed drama movie ‘House of Hummingbird’ in 2018.

Park Solomon has a lot of fans waiting for his new work since his performance in ‘Sweet Revenge’ gained him a wide fanbase. Well known for her role as Yunbok in ‘Hospital Playlist’, Jo Yihyun stars as one of the main leads in this drama. She debuted in 2017 and has been giving spectacular performances through supporting roles since then. Jo Yihyun landed her first lead role as Jin Jiwon in the ongoing high-school romance drama, ‘School 2021’. Yoo Insoo is a familiar face for many K-drama fans. He appears in numerous dramas as either a guest or supporting role and does a good job of bringing his characters to life. This stunning cast has all the fan’s expectations shooting through the roof, and we cannot really blame them!

‘Through The Darkness’ Episode 1: Watch Kim Nam Gil Talk About His Role & Aim At The Set