Venturing into the K-Pop Girl Groups you will find a whole lot of genres, tunes, lyrics, and visuals to feed upon. 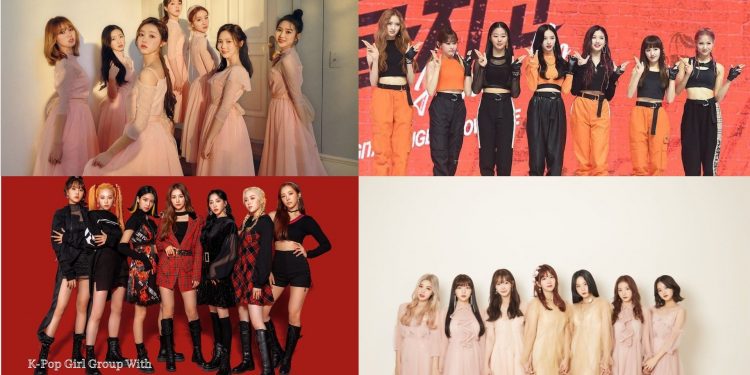 Venturing into the K-Pop Girl Groups, you will find a whole lot of genres, tunes, lyrics, and visuals to feed upon. When it comes to K-Pop, it has become one of the most loved music genres out there in the music industry. Today, it is the top playlist of millions from all across the globe. The way the music is produced in the genre has successfully and effortlessly managed to captivate everyone into its tunes.

There are several girl groups out there with different numbers of members. All the roles are divided among them, and with extreme teamwork, they make things happen in a very smooth way.

Their success depends on the way they are cooperating with one another and how effortlessly they are handling the assigned works. Here, we are going to talk about the K-Pop girl groups with 7 members in them. 7 has always been the hypnotizing number for everyone, and that’s why it has become one of the most searched ones too.

Therefore, here we have compiled the list of the top K-pop girl groups with 7 members. Let’s have a look inside and figure out everything about them.

“Cignature” is one of the K-Pop girl groups with seven members in it. The South Korean band operates under C9 Entertainment and is managed under J9 Entertainment which is the company’s sub-label.

The group made their debut with their single “Nun Nu Nan Na”. Their first group lead single titled “B Assa” was released on April 7 and later, their first EP, “Listen and Speak” became one of the most successful ones on the list.

Recently, on November 30, 2021, the group released “Dear Diary Moment,” which was their second EP featuring “Boyfriend” as the lead single.

HashTag is the second on the list of the K-Pop girl groups with seven members. It operates under LUK Factory and is produced by Kan Mi-Youn.

With their second mini-album #Aeji #passion, the group made their comeback on April 16, 2019. Later, on October 1, “My Style” was released, which was their first digital single.

The South Korean K-Pop girl group operates under Hunus Entertainment and made their debut with their first EP titled “We, first,”. The EP consisted of five tracks and the lead single.

On September 13, 2017, “Color Crush”, their second EP, was released, which consisted the lead single “Pow Pow”.

It was confirmed by the label on June 6, 2018, that the group would make its comeback with “Summer Dream” i.e., their EP in the list.

ALSO READ: K-Pop Predictions 2022: What Can We Expect From the Next Year?

The South Korean girl group operates under FNC Entertainment and is managed under FNC W, which is their sub-label. Their debut single album was “Let’s Play Cherry Bullet”. It consisted of “Q & A” which was the lead single, and other tracks like “Violet” and “Stick Out”.

On January 20, 2021, the group released “Cherry Rush”, their first EP with the lead single “Love So Sweet”.

The South Korean K-pop girl group operates under WM Entertainment. It was an original eight-member group but was reduced to seven when JinE left due to some health issues. With an eponymous extended play, the group made its debut on April 20, 2015.

Recently on April 16, 2021, the company announced that the group is going to make a comeback in the month of May. Following the announcement, “Dear OhMyGirl” which marked their eighth EP, was released on May 10. The single titled “Dun Dun Dance” which was released alongside the album, bagged the top position at the Gaon Digital Chart.

Their second Japanese comeback was announced, and the “Dun Dun Dance” Japanese version was released on September 22.

The K-Pop Girl Group made their debut with the album “Do It Amazing” which consisted the lead single “Somehow”. The group operates under MBK Entertainment, and their fifth EP titled “Newtro” was released on March 19, 2019. The title single “Woowa” too was released.

Later it was announced that DIA would release their sixth EP, “Flower 4 Seasons” marking their comeback on June 10, 2020.

Operating under Dreamcatcher Company, the South Korean girl group made their debut with their album “Nightmare”.

The group has gone through several installments, and with their third installment, it announced their new comeback with “Dystopia: Road to Utopia”, their sixth EP. Its lead single was released on January 26, 2021, titled “Odd Eye”. Later with their special EP “Summer Holiday” and single “Because” the group marked their comeback on July 30, 2021.