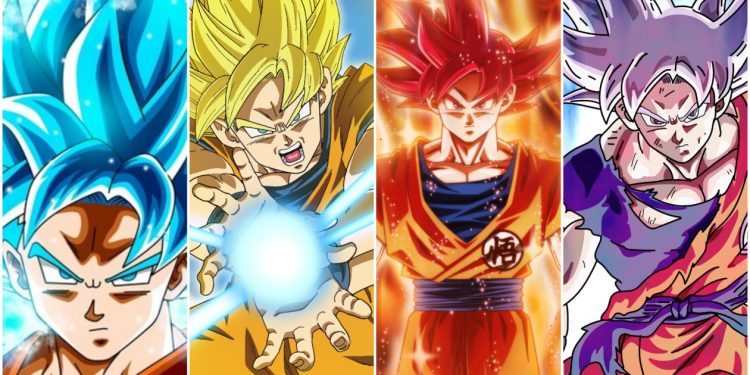 All forms of Goku

Every time there’s an apocalypse-level threat to Earth or anything precious to Goku, he stands strong as the last flicker of hope. Even when things are bad, and there’s a big bad villain trying to crush everything in its way, we expect Goku to power up into a brand new form with intense music playing in the background. From the Giant Oozaru in the Dragon Ball series to the most recent Ultra Instinct transformation, Goku has never let us down in all these years.

Thanks to the Saiyan blood flowing in his veins and his unwavering willpower, he has quite an array of transformations up his sleeves by the Dragon Ball Super series. There are forms like the Giant Oozaru that he can’t pull off anymore, but that didn’t stop him from powering up. Here, we have brought together all the forms of Goku that he can resort to in the Dragon Ball Super series.

There’s nothing much to explain here. It’s Goku without resorting to any of his flashy transformations. However, don’t mark it weak just yet. Goku’s current base form is more than enough to take care of most of the villains we have seen in the Dragon Ball and Dragon Z series. No matter how strong the opponent is, Goku has this weird habit of starting a fight in his base form and gradually powering up over time.

Moreover, in the recently released manga chapters, Goku learned how to use Ultra Instinct even in his base form. This made Goku’s base form quite a reliable option against potent enemies. He may not be able to hit them hard, but at least he can evade the fatal blows as he did in his fight against Granolah.

The sky fell upon Vegeta when he realized that Goku is the Super Saiyan that emerged after centuries. (Although Goku wasn’t Super Saiyan at that point) Much later in the arc, Krillin’s death was the trigger that unleashed the Frieza-killing monster within Goku. Golden spiky hair, green eyes, and sparkling aura, that’s how beautiful this form looks.

The Super Saiyan form isn’t even close to obsolete in the ongoing Dragon Ball Super series with titanic opponents. In Universe 7’s final stand in the Tournament of Power, Goku and Frieza’s old-school forms (Super Saiyan and Final form, respectively) pushed Jiren out of the fighting arena.

Super Saiyan Grade is among the most ineffective and inefficient forms of Goku we have ever seen. It’s stronger than Super Saiyan, but the bulky muscles restrict Goku’s movements. He only unleashed his form while training Gohan in the hyperbolic time chamber and forbade Gohan not to rely upon this transformation. Even in the Dragon Ball Super anime, Goku is expected to retain this transformation. However, I doubt if he will ever use it. Trunks used this form in a practice session against Vegeta just to catch him off-guard.

The Super Saiyan Third Grade wasn’t an effective transformation. It surely made Trunks stronger than Cell but cost him his speed. Vegeta knew about this drawback, so he didn’t push any further. They needed a transformation that amplifies their strength without sacrificing speed. Gohan was the first person who unleashed this power and defeated Cell with it.

It didn’t take Goku and Vegeta long to acquire this form since they were already well past Super Saiyan. Currently, in the Dragon Ball Super series, Goku and Vegeta show this form only when they are teaching any fellow Saiyan while they fight. It looks almost similar to Super Saiyan, just a bit spikier hair with less number of bangs falling on his forehead.

Super Saiyan 3 is one of Goku’s most popular transformations. It took years of intense training in his afterlife to attain this form. The only other Saiyan who unlocked Super Saiyan 3 is Gotenks (Goten and Trucks fusion) that too after Goku showed them how to do it.

That’s the overpowered form that convinced Vegeta that Goku is superior to him. Super Saiyan 3 is very effective in close-combat fights but often takes up a lot of energy for sustaining. In Dragon Ball Super, Goku’s Super Saiyan 3 was enough to bring down Future Trunks in a single hit.

Super Saiyan God was only considered as a legend till Lord Beerus showed up on Earth to check its existence. Thanks to wish-granting dragon Shenron, Goku figures out the ritual to unleash Super Saiyan God. After attaining this power, Goku almost fought toe-to-toe with the Hakaishin. (although Beerus was presumably holding back)

Super Saiyan God is one of the most stable forms of Goku on this list. It’s the perfect balance of strength and endurance. It’s stronger than the Super Saiyan forms and takes up a lot less energy than Super Saiyan Blue, thereby making it Goku’s go-to transformation for long-going fights.

Although it is the most common Saiyan form in Dragon Ball Super, Goku completely mastered it in his fight against Zamasu and Black Goku. In his mastered Super Saiyan Blue form, Goku is just unstoppable, and his reflexes are just out of the world even without using a shred of Ultra Instinct. Later in the Tournament of Power, Vegeta used the same power to evade Jiren’s highspeed punches.

The history of Kaoken goes back to the first season of Dragon Ball Z, where King Kai taught Goku Kaioken to amplify his powers exponentially. It gives Goku a sudden boost in speed, strength, and endurance, allowing him to change the course of a fight. However, there are high risks of using Kaioken, and the backlash may even result in death. Goku was almost half dead after using it against Vegeta.

In the ongoing Dragon Ball Super series, Goku is often seen using Kaioken with Super Saiyan Blue. He tried to save this as a trump card against Beerus but was forced to unleash it against Universe 6’s Hit. The best part is, Goku can use Kaioken with any of his forms. I wonder what will happen if Goku tries pairing up Ultra Instinct with Kaioken.

Whis dropped numerous hints about Ultra Instinct while he trained Goku and Vegeta. It seems he was well aware of Goku’s potential to attain this form. It was only in the Tournament of Power when Goku started gettings signs of Ultra Instinct after absorbing his own spirit bomb.

However, this incomplete Ultra Instinct transformation has some major flaws. It can only be activated when Goku is subconscious or is on the brink of death. The form lasts hardly a minute and ends up draining all of Goku’s energy. Moreover, the Ultra Instinct Sign form does very little damage and isn’t suited for landing fatal blows on potent opponents. Goku used this form as an intermediate to get the hang of the Ultra Instinct state and master it within the limited time he had.

Mastered Ultra Instinct is the strongest of all the forms of Goku we have seen so far in the series. It totally eliminates the drawbacks of the Ultra Instinct sign transformation and amplifies his strength and reaction speed ten folds. Unlocking this form is like stepping into the arena of Gods or even surpassing most of them. All the Gods of Destruction stood up to honor Goku’s massive power-up, and that’s one of the coolest moments of Dragon Ball Super anime.

Well, this form, too, comes with a fair share of risks. Exploring the Godly powers despite being a mortal often results in a severe backlash. The same thing happened to Goku when he was on the verge of defeating Jiren. The Ultra Instinct form backfired, and Goku had no other choice but to rely on Frieza and Android 17 to continue the fight. In the manga, Whis is training Goku to understand how Ultra Instinct works. It’s just a matter of time before he learns how to avoid the backlash and further push his limits.