In “Alan Wake Remastered,” it’s time to return to Bright Falls after an 11-year absence. “Alan Wake Remastered,” announced by Remedy Entertainment Creative Director Sam Lake on an “Alan Wake” fansite, aims to provide the horror-thriller an updated set of graphics while preserving the same gameplay and story components that fans liked. This is not like the remake of “Resident Evil 2,” which recreated the original game from the ground up, modifying the gameplay and some story elements.

“In many respects, this story and character were very personal to me”. Alan Wake, who is also a writer, provided me the opportunity to integrate what I do and love as a writer as an element in the plot,” Lake stated. “Alan Wake also included the mystery of forests and lakes, something I treasure as a Finn”. And, rather than a focused one-note horror fare, it was this weird, even wasted blend of horror, humor, and mysterious mystery.

Alan Wake will be published on PlayStation platforms for the first time as a result of the remaster. Both pieces of DLC are included in the game. This includes The Writer and The Signal, but the spin-off Alan Wake’s American Nightmare is not. Everything you need to know about Alan Wake Remastered is right here.

Alan Wake Remastered is scheduled to be released on October 5, 2021. It will be available on the following platforms: Xbox One, Xbox Series X|S, PS4, PS5, and PC via the Epic Games Store. Previously, the game was exclusively available on Xbox 360 and Steam, and it was actually removed from the Microsoft Store for a few months owing to licensing concerns. It was later relisted, however.

It’s unknown whether the current-generation consoles will have additional graphics options, such as a performance setting or HDR support. However, the game’s introduction on The Sudden Stop does say that Alan Wake Remastered would have certain “choice next-generation enhancements.” In any case, it will be a big upgrade over the original, which does not hold up well by today’s standards.

Are you looking for the most recent Alan Wake Remastered trailer? You’ve arrived at the correct location. We’ve brought you the trailer right here.

During the PlayStation Showcase 2021, the first trailer for Alan Wake Remastered was shown. For the first time, the game will be available on PlayStation platforms.

What to Expect from Alan Wake Remastered?

Alan Wake Remastered, like other remasters, will feature both previously published DLC for the game as well as better aesthetics. The game will feature “all-new rendered 4K visuals,” according to Remedy, although it’s unclear what additional technical enhancements we’ll see. We do know that the game will have a new character model for Alan Wake as well as new cinematics. There will also be some “choice next-generation improvements” in the game.

Here’s a quick synopsis of what to expect if you’ve never played Alan Wake. Alan Wake is the story of a disturbed, best-selling thriller author who is experiencing writer’s block. Alan and his wife Alice decide to try a change of scenery and travel to the Pacific Northwest town of Bright Falls in order to get the cogs whirring again.

Unfortunately, Alan’s life swiftly becomes a living nightmare when Alice is kidnapped by a malevolent force. Alan starts in a desperate attempt to save his wife and gradually realizes that he is living in horror fiction that he appears to have written himself. 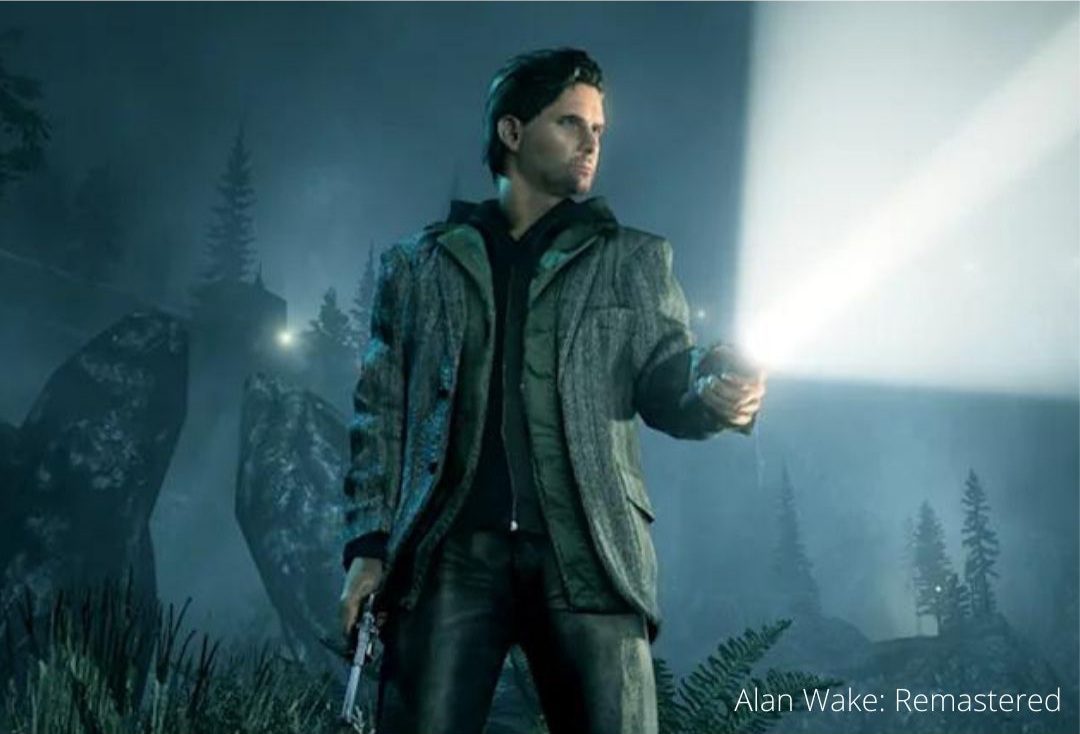 Alan Wake, which was originally designed as an open-world survival game, now has a more linear framework, which Remedy believes aids in the game’s plot. The plot is conveyed in the style of a thriller TV show, with six chapters often bookended by plot twists and cliffhangers. Each episode opens with a summary of the past events, which is especially useful if you’ve been away from the game for a while.

Alan Wake’s combat is still somewhat unusual to this day. This involves shining a flashlight on adversaries to make them exposed to shooting. It implies you’re helpless for a brief instant when you shine your flashlight, which naturally adds to the excitement.

You must also keep a check on your flashlight’s batteries, or you will be unable to damage your enemies. Although your battery will gradually recharge, it is more efficient and frequently required to hot-swap fresh Energizer-branded batteries into your flashlight. Ammunition management is essential in every horror game.

Alan Wake Remastered includes both The Signal and The Writer DLC, both of which were originally available on the Xbox 360. The arcade-style Alan Wake’s American Nightmare is not included in the remaster. This saw players experience a more combat-heavy take of Alan Wake with a lot less structured tale.

Will there ever be a sequel?

Depending on its performance, Alan Wake Remastered could open the way for a long-awaited sequel, which fans of the original game have been requesting for quite some time. Remedy hasn’t ruled out a proper sequel. The remastering of the first game only adds to the likelihood of Alan Wake 2. Alan Wake-specific stuff was also included in Remedy’s current title, Control. This hinted at where the game could go next and related the two games together. We’re cautiously optimistic that Alan Wake 2 is in the works at Remedy, however, there’s no assurance at this time.