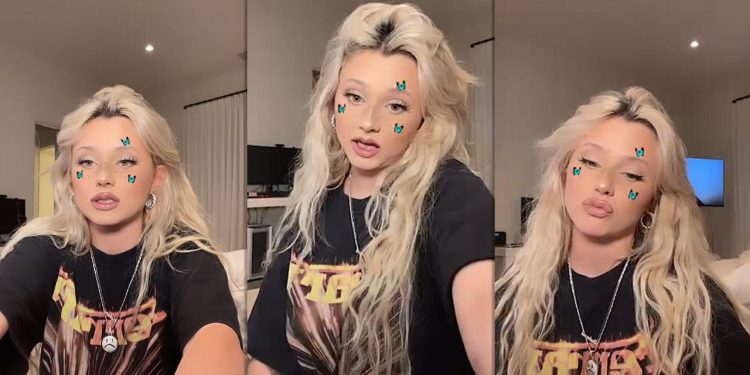 Ever since Alabama Barker posted a TikTok with North and Penelope, it looks like everyone is talking about that! The clip has gone viral, and no doubt, it is an adorable video. Alabama, who is the daughter of the famous Blink-182 drummer Travis Barker, is a famous TikTok influencer. She is often seen posting pictures with Travis’ girlfriend and famous model and influencer Kourtney Kardashian. Now that Travis and Kourtney are engaged, the families are closer than ever!

Talking about North and Penelope, even they are TikTok famous! Both of them have their own accounts, which they share with their mothers, Kim and Kourtney. The two kids frequently share amusing and funny videos on TikTok and have quickly risen to prominence on social media platforms. Penelope even uploaded a funny and adorable TikTok video with Travis and Kourtney. They were seen whirling about as the song ‘Helicopter’ played in the background. Now, let us talk about the viral TikTok video.

Alabama Barker TikTok: What Is In The Clip?

Nowadays, there is no age to become an influencer. As the world is getting more and more tech-savvy, even children are influencers and have a huge impact on the entertainment industry! Talking about Alabama Barker, the fifteen-year-old influencer, shared a TikTok clip. The clip features North and Penelope. North, being the daughter of one of the most successful rappers in the industry, Kanye West, is very famous. North’s mother is the very famous model and influencer, Kim Kardashian. Along with her, Penelope, who is the daughter of Kourtney Kardashian, has been in the limelight since childhood too. North is an eight-year-old girl, while Penelope’s age is around nine.

Alabama has already been seen twinning with Kourtney previously, and Travis, the father of Alabama, has featured in some cute and adorable TikTok clips with Kourtney and her daughter Penelope. Coming back to the viral TikTok clip, the three children, Alabama, North, and Penelope, are participating in the viral Drilla song trend. The original track was performed by Opps & Blocks. Alabama captioned ‘Meet my friends’ over the video before panning around the camera to Penelope and North sitting next to her. All three of them are bobbing their heads with the song.

Travis Barker and Kourtney Kardashian’s families appear to be incredibly comfortable with one another! The Kardashian and Barker children, in particular, have acquired new friendships and share a close bond in this relationship.

Who Is Alabama Barker?

Alabama is the daughter of Travis Barker. She is only 15 years old, having been born on December 24, 2005. Alabama spends a lot of her time on TikTok and other social media platforms like most people her age. She shares a lot of videos on TikTok and is a huge star there.

Alabama has 1.1 million followers on the app TikTok where she uploads videos of herself with her family and friends participating in challenges and trends around TikTok. Shanna Moakler, the mother of Alabama, has won the title of Miss New York USA in 1995. Travis Barker and Shanna had been married for four years before getting a divorce in 2008. Alabama has two siblings, a half-sister who is called Atiana De La Hoya and a brother who goes by the name Landon Barker.

Also Read: Penelope Disick’s Tiktok Reinstated: Why Was She Banned?

Travis and Kourtney’s new relationship may be shocking to some people, but they have a long history of years together. The new couple lives in the same community in Calabasas, California. They have been seen together, going out on several occasions. In 2018, they were seen grabbing dinner and then going to an evening church session together. Travis, along with his ex-wife Shanna, has been on Keeping Up With The Kardashians too!

Since they live so close to each other, they used to go on casual dinners often. Travis said they have been flirtatious for a long time, and he even had a crush on her, but nothing ever happened between them until recently. After enjoying Valentine’s Day earlier this year, the couple announced their relationship in February 2021. Both of them uploaded a photo of holding hands in a car. Ever since that, both of them have been on the headlines for the adorable relationship, and now, they are even engaged!

Also Read: Kourtney Kardashian Net Worth: How Much Does She Earn These Days?