Netflix’s Ajeeb Daastan is making quite an impact the way OTT’s previous anthology projects did. As in Lust Stories and Ghost Stories. This time around, new mixed bag directors have taken the seat to bring so twisted stories. They include Neeraj Ghaywan, known for the movie Masaan, Kayoze Irani, Shashank Khaitan, known for Humpty Sharma Ki Dulhania, and Raj Mehta. Among the four twisted stories coming from the movie, “Khilauna” (Toy), directed by Raj Mehta, is making quite ways. Especially for its dark storyline based around two orphan sisters. The story is scary to look at if the twists weren’t enough. Thus, leaving the viewers questioning the motives.

Ajeeb Daastans originally follow short films based on jealousy, entitlement, prejudices, and toxicity. Relationships and love get tangle amidst this. Here we are breaking down one of the darkest tales among the four stories coming from Raj Mehta called Khilauna, featuring two sisters who got accused of killing a baby. So let’s take a look at it and what its ending means.

So Khilauna is a story of two orphan sisters Meenal (Nushrat Bharuccha) and Binny (Inayat Verma). Their father ran away after Binny’s birth while their mother died sometime later, leaving both of them to survive on their own. Meenal works as a maid at rich households to make money for themselves and educate Binny, in turn, which goes to a government school. Both the sisters also share a friendship with Sushil (Abhishek Banerjee). A fellow laundryman living in the outskirts of society where Meenal works. Meenal is also romantically involved with him.

When there is a power cut in the sister’s little households, Meenal is bound to convince Vinod Agarwal (Maneesh Verma), the president of the community. The only person who could bring electricity for their house on the community’s outskirts. So, when Agarwal’s wife becomes pregnant, Meenal grabs the opportunity and asks to help as a maid, who is later accepted.

The Strugglers And The Gifted Ones

Living by the side of rich households, the sisters learn a thing or two about them. How gifted the rich are or the kids there.While on the other side they struggle for one time cooked meal. Once the baby is born, everything starts coming apart. Vinod Agarwal lays eyes on Meenal, which he has been doing since she started working there. One time he tries to grab onto her and molest her in front of Binny. This results in the sisters running away to Sushil.

Sushil tries to discuss the matter with the sisters until Vinod arrives in fury. To take out the anger of Meenal walking away from him, Vinod opts towards Sushil. He beats him down by making up a reason that his laundry stall is not allowed near the premises. Still, at the end of the day forgives and invites all three of them to the party for his baby.

The Death And Investigation

The party sees everyone lighting up as Meenal does the regular work. Binny plays with the baby, and Sushil still leaves a bottle of drink. On his way back home, Sushil, in a fury, picks up a rock and throws it at a building’s electricity unit. This leaves the party place and building in the dark, and the baby disappeared. Everyone searches for the baby in a panic. Soon, Vinod finds her inside a cooker which is put on the gas.

So, what carries on is an investigation. The police grab their hands on all three Sushil, Meenal, and Binny, who become the prime suspects. The investigation takes the Police to the revelations of Vinod trying to molest Meenal and Abha, women whose house Meenal worked at, being jealous of Vinod’s wife having a baby. In the end, Abha comes ahead to confess. We are not revealed about what the conversation was between the police inspectors and Abha as it is muted. It somehow leads the officer to Binny and her bag, which has Agarwal’s baby’s toy. 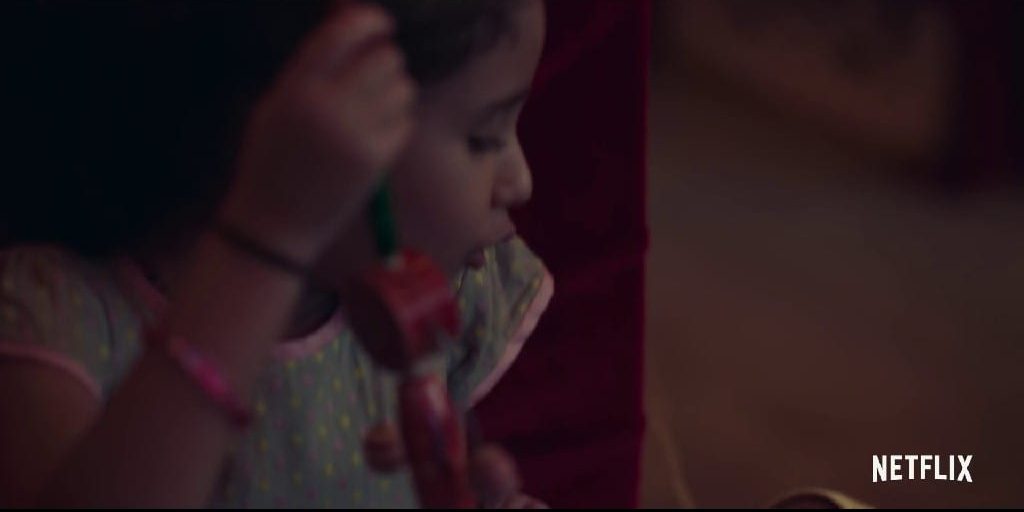 So what happened here? So the thing is, Binny is the one who killed Baby. As we saw in one of the party scenes, the last baby was with is Binny, and Abha had noticed the fact. Not a grown-up man or woman but an innocent child who opted to go for this movie. What led her to do this? Throughout the short film, Binny often mentioned how she thought about rich people being gifted. As mentioned above, the sisters struggle on an everyday basis for a single bread, whereas the rich ones get gifted right away.

In turn, she compared the rich one’s baby to a toy as in Khilauna, much like how the rich ones do to them. The one they are taking so much care of while on their sides, there are struggles after a struggle. Plus, another thing was Agarwal groping Meenal which Binny witnessed right in front of her eyes. That one incident and Suhas getting beat is something that might have fueled Binny’s motives. Probably coming to the fact how rich treated them like a plaything.