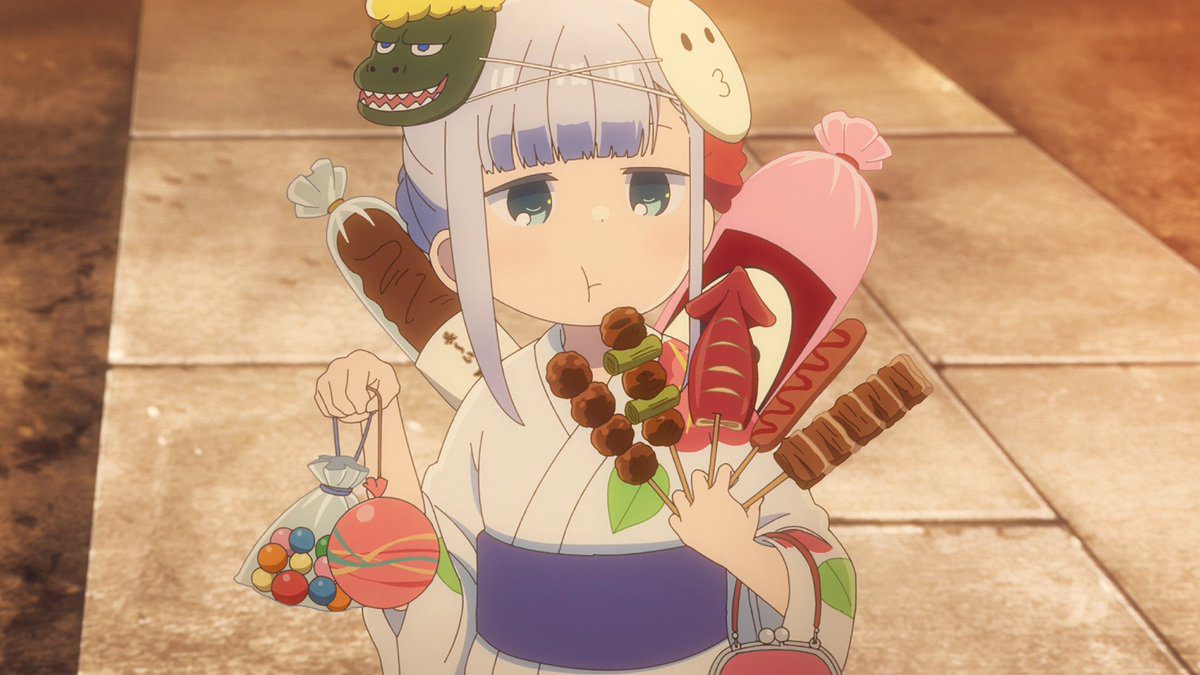 The release date for Aharen is Indecipherable Episode 9 is approaching, and fans are eager to find out what will happen next. The previous few episodes have been highly revealing, and the story appears to be on the verge of taking a dramatic turn. We’ve decided to provide all available information on the Aharen Is Indecipherable Episode 9 imminent release date due to the tremendous degree of interest displayed by fans in this episode’s release.

Aharen-San is Indecipherable is a delightful new rom-com anime series from the Spring 2022 anime season, and the story’s two main protagonists, Raido and Aharen Reina didn’t take long to form a good yet understated friendship and possibly romance. They’re both keeping their silence about it, but actions speak louder than words. The puppy love comedy follows Reina Aharen’s “indecipherable” daily existence with Raido, who sits next to her in class. Raido detected some gap between them at first since Aharen isn’t very skilled at judging distance between individuals or personal boundaries. Aharen and Raido developed their own rhythm and peculiarities as best friends over the course of five episodes, and other characters, from their enthusiastic history teacher to Aharen’s dandere pal Oshiro, are starting to notice.

The series is being animated by Studio Felix Films, a relatively new studio, with Tomoe Makino and Yasutaka Yamamoto serving as primary directors. The series’ scripts are handled by Takao Yoshioka, and the character designs are drawn by Yuko Yahiro. Meanwhile, Satoru Kosaki and MONACA are collaborating on the score.

Aharen Is Indecipherable Episode 8, titled “Time for the Summer Festival, Huh?”, released on May 21, 2022. The main focus of the episode was the budding romance closeness and romance between the duo in the cliche summer festival atmosphere with gags and goofs about the two from the other characters.

In the episode, Tobaru-sensei is invited to lunch on the rooftop by Ms. Miyahira. However, Raido, Aharen, and Oshiro soon join them, and Tobaru-sensei has difficulties containing herself when she sees Oshiro wants to sit near them. When Raido and Aharen feed Oshiro and sit close to her, she resists even more. When she imagines them as a family, she eventually passes out. Tobaru prepares by imagining unlikely romantic possibilities between Raido and Aharen that night, but she faints again, and Miyahira finds her unconscious.

She’s a sucker for ridiculous romance anime clichés like falling on a banana peel into a first kiss, which is far too silly to be taken seriously. In her fantasies, she imagines Raido and Aharen raising Oshiro, and at one point, she even assumes that Oshiro likes Reina, not Raido. 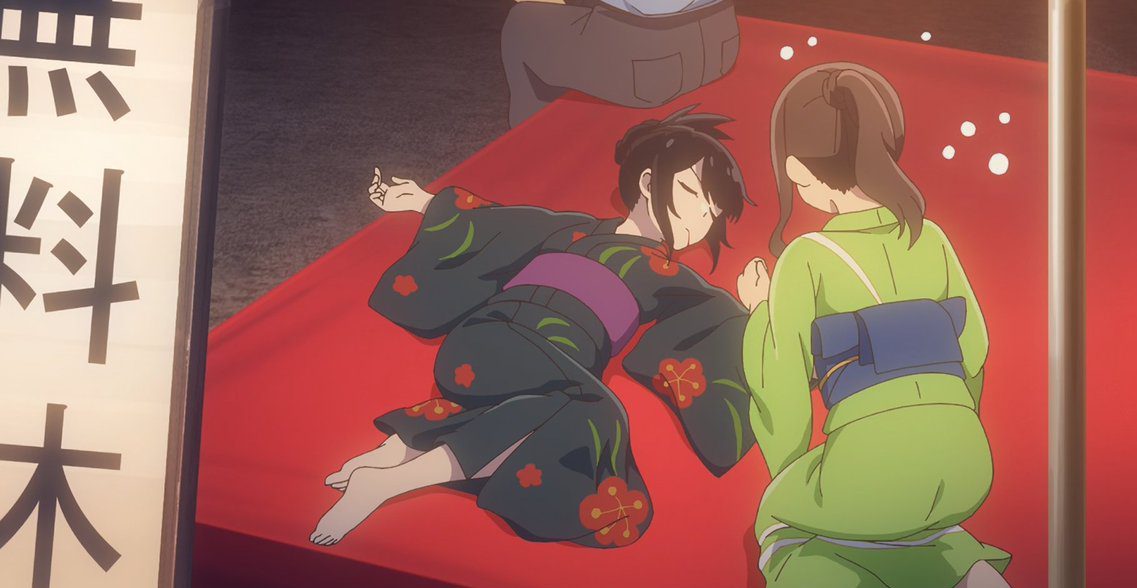 Ishikawa and Sato invite Aharen, Raido, and Oshiro to the summer festival the next day. Ishikawa and Sato do not standout out despite their second appearance, but their presence allows our main duo to demonstrate some solid comedy. There are still jokes about Raido overestimating himself, but there’s a delightful twist in that he’s not competing with Aharen, but rather trying to optimize their festival “date”.They disperse themselves according to their ability in order to earn the most prizes. Aharen and Raido realize they’ve lost each other after playing various games.

Futaba approaches Raido, mistaking him for her father. Futaba genuinely thanks Raido, albeit inaudibly, as he reunites her with her father. Raido is approached by Aharen, who thanks him for locating her. We take a break from all the gags to finish the romance portion of this romantic comedy series. Raido assisting Reina in seeing the fireworks for the first time is about as simple a setup as you can get – yet that doesn’t take away from the magic of it.

They watch the fireworks, and Aharen says it’s the first time she’s seen them properly because of her small stature. Raido resolves to rejoin the group and extends his hand to Aharen to accompany her. She accepts it with a flushed face. 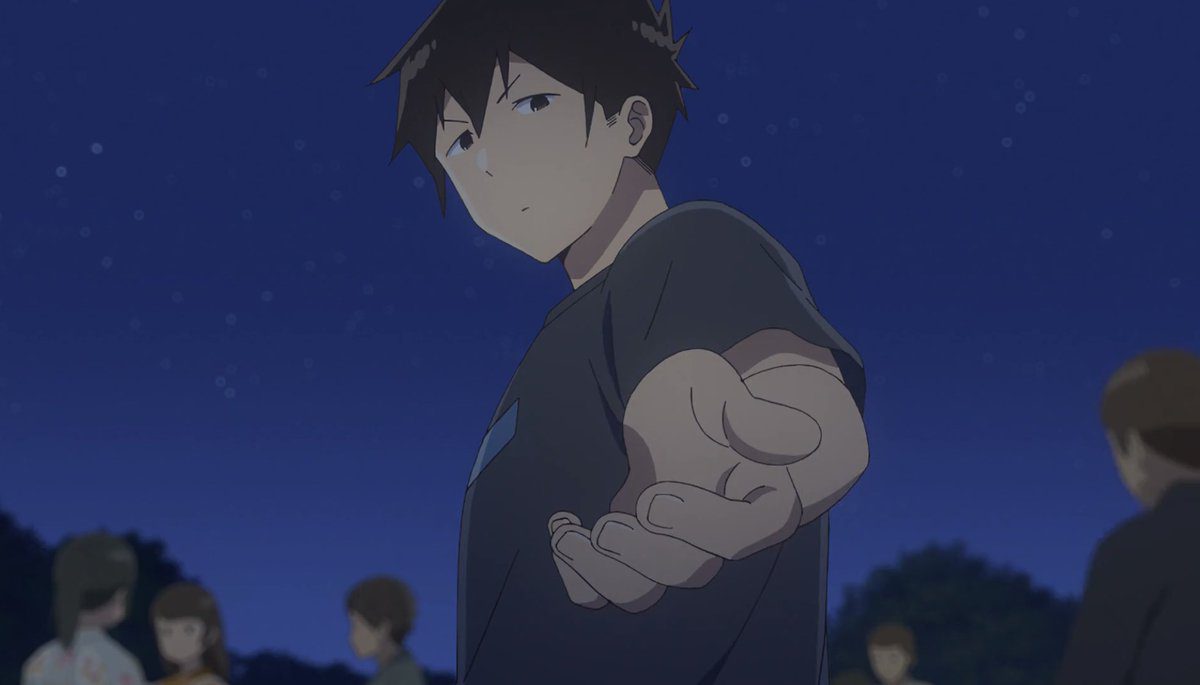 Raido Offering His Hand To Aharen

Aharen Is Indecipherable Episode 9 Release Date And Where To Watch

If you are currently residing in Japan, the show can be found on the MBS and TBS channels. If not, don’t panic; the show is available to broadcast on several internet streaming services.

Crunchyroll is streaming the episodes with English subtitles for those in the United States, Canada, Mexico, and Brazil. Meanwhile, Aniplus, which has subscribers in India, Malaysia, Thailand, and the Philippines, has licensed the show for its viewers. Finally, users in Mainland China can access the show on Bilibili worldwide.

Also Read: What Is The Meaning of Canon In Anime?