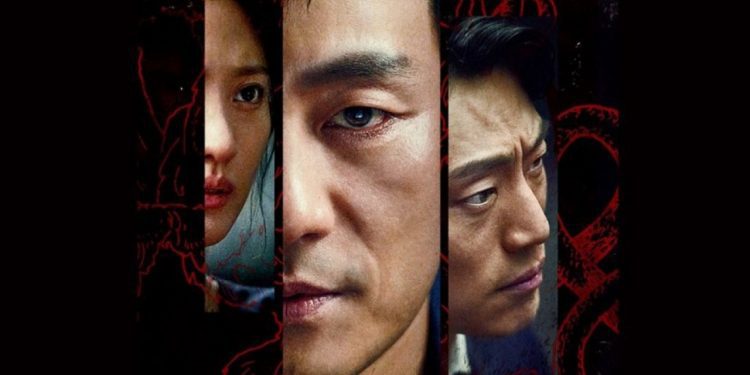 ‘Episode 11 of OCN K-drama ‘Chimera’ is releasing this weekend and the previous episodes of the k-drama have been chaotic. With the k-drama reaching its highest ratings yet, the investigation for the real Chimera is not yet over. After catching the ‘Chimera’ behind the explosion at Seoryeon’s new headquarters, Jae Hwan reached the police station. He was welcomed with a round of applause. Relaxing that they’ve caught the ‘Chimera’ and that he and his friend were safe. Chief Bae got everybody on the special unit dinner and drinks on his card.

But Jae Hwan wasn’t very interested in the dinner as he complained about how the case isn’t over yet, but they are still celebrating. As Gwang Soo got up to leave, the detectives got into a fight over defending their seniors. While Pil Do revealed to the team that Jae Hwan had been meeting up with Joong Yeop. As Gwang Soo went after Jae Hwan, he got to know that Joong Yeop is Lee Sang Woo’s son. As Jae Hwan told him that Joong Yeop isn’t the killer, Gwang Soo told him to be objective and left.

As Eugene went on to check at Hanmyung University after looking at Sang Gu in the suspect list, he got alerted. Following her from the university, he went on to hold her captive as she got into the elevator of her apartment building. Looking around at her house as Sang Gu and a chemical bomb sat in front of her. She realized that her house wasn’t really safe proof. Getting a call from Jae Hwan, she asked for help, telling him to come over with his friends. She went into the flashback, seeing the person shooting himself. As Sang Gu asked about the investigation, she told him to check it himself. Understanding her trick, he attacked her. He kept telling her how wanted to be on good terms with her, but she keeps making it hard.

On the other side, getting all the details about Sang Goo as Eugene marked his profile for Jae Hwan to look into. He drove straight to Eugene’s house. He told the guard to evacuate nearby people without alarming them. Eugene went on with her emotional attack as she called him the fake Chimera. Pointing out his aspirations about not being able to become a firefighter and how it is more of his fault than Seoryeon. As she went on and on, he went on to attack her again but got disturbed by the bell. Trying to get her out acting like a serviceman, Jae Hwan was hoping his plan would work.

As she opened the door, Jae Hwan passed a smoke bomb into the house. As he got into a fight with Sang Gu, he went on to threaten him with the chemical bomb he already had on the table but ended up getting attacked by Eugene from behind. The police took him to the station. Looking into him, they found out that Sang Gu had been wanting to be a firefighter for a long time but always got rejected. After his final attempt, he started a firefighting blog online. As he sat into the interrogation room, he denied him being involved in Seoryeon’s Head Quarter blast at first. But being shown the video of him at the site and his confirmation, he asked for his lawyer. Getting to know that his lawyer was going to be late, Sang Gu went on to take the fifth.

Also Read: The Grand Serpent Arrived on Earth: What will happen in Doctor Who Season 13 Episode 6?

The investigation unit went on to check into look through Sang Gu’s place and office. Looking through his house, the officers found gun powder along with some radioactive protective units. Eugene went on to talk to Sang Gu about the bomb he planted at Seo Hyun Tae’s house. As she asked him about it, he just called himself Chimera. He went on to take the blame for the last three murders too. But Eugene caught him in the lie. He asked her to guess why he was calling himself the Chimera. As Eugene asked him the answer, he revealed the TH-5 made Hyun Tae the richest man in Korea. As the whole chemical research team except him was killed by Chimera. He must be fearing the Chimera too. With this, Figuring out that it might not be a bomb but a chemical thing, she informed Jae Hwan.

While Jae Hwan went to Hyun Tae’s house to look for the bomb, Neither Hyun Tae nor Hwa Jung let the police enter their place. Naming some over-the-counter explosive chemicals, Jae Hwan got into the house but with some consequences. Looking around for a chemical bomb and seeing an award from Hanmyung University, he asked if they got something from there recently finding a gift from the university from two weeks ago, a radioactive device. Getting to know about radioactive iodine, both Hyun Tae and Hwa Jung went to the hospital on time.

Also Read: Vice Season 8 Episode 12: What to make of The Government Surveillance?

Sitting together, Hwa Jung told Hyun Tae about her meeting with Joong Yeop. She went to see him at the university and a lunch. As she told Joong Yeop she had been tracking him since he had her car, he bought up the topic of TH-5 being illegal to use in the industries. She told Hyun Tae that Joong Yeop thinks Sung Woo didn’t commit suicide but was killed instead. As Hyun Tae got angry over the claims, Hwa Jung suggested that he might be Sung Woo’s son. As he talked about getting him deported as soon as possible, she told him he might raise a case against the use of TH-5.

Chimera episode 11 will release on December 4, 2021. While Seo Hyun Tae has sent out orders to keep an eye on Jae Hwan, looking at Eugene and Jae Hwan opening up with each other. They might be getting closer than before. As he sat with Eugene, he told her that he always aspired to be like captain Han. But him hiding the evidence from Son Wan Ki’s and case and the thought that Pil Do might be right. He is afraid of the truth. Eugene, too, opened about the man from her flashbacks. Todd O’Riley, a gymnast coach who got framed as a rapist. He shot himself in front of her but looking at the ‘fact’, she wasn’t able to listen to him before those three seconds.

While Jae Hwan and Joong Yeop are looking for the whistleblower Ryu San Hee. They have been bonding ever since sharing their childhood stories. Brainstorming together about what could’ve happened with Sung Hee. If she really died in that fire or used it to escape her situation. Gwang Soo, on the other side, revealed to Min-Ki that the real Chimera is still out. Talking about Lee Sang Woo, he told them that they might’ve found his son. While Hyung Guk found something wrong with the ceiling and as he went on to check it, he took out almost all the information related to the TH-5 research team and the old Chimera case. Assemblyman Lee Min-Ki might be making his way to Hyung Guk’s office. Wanting to talk about the old Chimera case.

Where To Watch Episode 11 Of The K-drama ‘Chimera’?

Episode 11 of the k-drama ‘Chimera’ will be available to watch on OCN TV Network at 10.30 PM KST. While for the global streaming, fans can head to Rakuten Viki. The previous episodes are also available on Viki, along with subtitles.