After many k-pop idols the 'Knowing Bros' team has finally invited the most awaited girl group Aespa on the show. 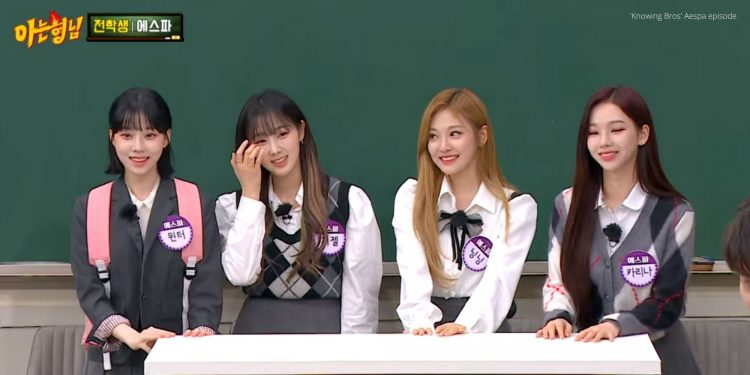 Along with kdramas, the South Korean entertainment industry is famous for its variety shows. One of the longest-running variety show is ‘Knowing Bros’. The show is also known by the name ‘Men on a mission and ‘Ask Us Anything’. Talking about the cast, the most prominent and entertaining member of the MOAM school is Kang Ho Dong. He has made the ‘Knowing Bros’ season 6 episode 43 and all the other episodes funnier with his statement sound choo-choo.

In the recent episode, the ‘Knowing Bros’ team invited the Aespa girl group as transfer students. Among all the South Korean girl groups, Aespa has been the most inspirational group. Moreover, the episode might get a rating higher than the ‘Blackpink’ episode. The reason behind this is the candid fun Winter, Giselle, Ningning, and Karina have in ‘Knowing Bros’ season 6 episode 43.

In the previous episode, the ‘Knowing bros’ cast surprises their audience with the Aespa girl group members. The South Korean girl group is famous globally and was formed by SM entertainment. The four members who arrive on the show are Winter, Giselle, Ningning, and Karina. The last time Aespa was on the show, they played a game called catch the snake. At that point in time, Mr. Defconn was also part of the show. The episode starts with Aespa members giving a music performance on the song ‘Moam Jukebox’.

Then Winter turns in the admission application in which the strengths of all the Aespa members have been written. The first display of strength is done by Winter with her sword dance. According to the girl group, they are like a family who eats together, shares clothes, and parties on weekends. As the conversation progresses, we find out that Ningning debuted in Chine when she was five years old. Whereas one of the singers portrays her drawing skills in Soo Geun’s picture. Then we get to see the photoshop images of all the ‘Knowing Bros’ cast members.

Not To Laugh Challenge

Ningning claims that she cannot hold her laughter and wants to take up this challenge. Against her is Jang Hoon, who never laughs. Let’s see who will win the laughing challenge. In the first round, Ningning burst into laughter as Jang Hoon makes a weird face. In the second round, Heechul makes Jang Hoon laugh by passing comments on him. After the first competition, Winter sings the OST of the Korean drama ‘Hotel DelLuna’. This leaves everyone mesmerized and happy. The name of the song is ‘All About You’. After every one, it’s Giselle’s turn, and she decides to perform a dance.

After the acts and performances, the Aespa members ask personal questions to each other. The questions were all about Winter, and the other members had to answer them correctly. After this, every member takes turns to ask questions about themselves. The previous episode of ‘Knowing Bros’ is a must-watch. In the upcoming episode, we will see the ‘Knowing Bros’ cast end up in a ‘Squid Game’ series scenario. They will play games to survive and beat each other to win 45.6 billion won. Also, they’ll play the famous honeycomb game where a player has to cut out the shape without breaking the honeycomb.

The ‘Knowing Bros’ Season 6 Episode 43 will be released on 18th January 2021. The ‘Knowing Bros’ cast has made a memorable episode with the girl group Aespa. There are a lot of ‘Squid Game’ references in the episode. Is this how the show is giving a hint of the next episode? Moreover, the cast and the girl group seem to get along very well and play a quiz game. It is a quick wit test in which every team has to answer the questions continuously within 3 seconds.

The James & Racquel Engagement Party at Vanderpump Rules Season 9 Episode 15: Is It Happening?