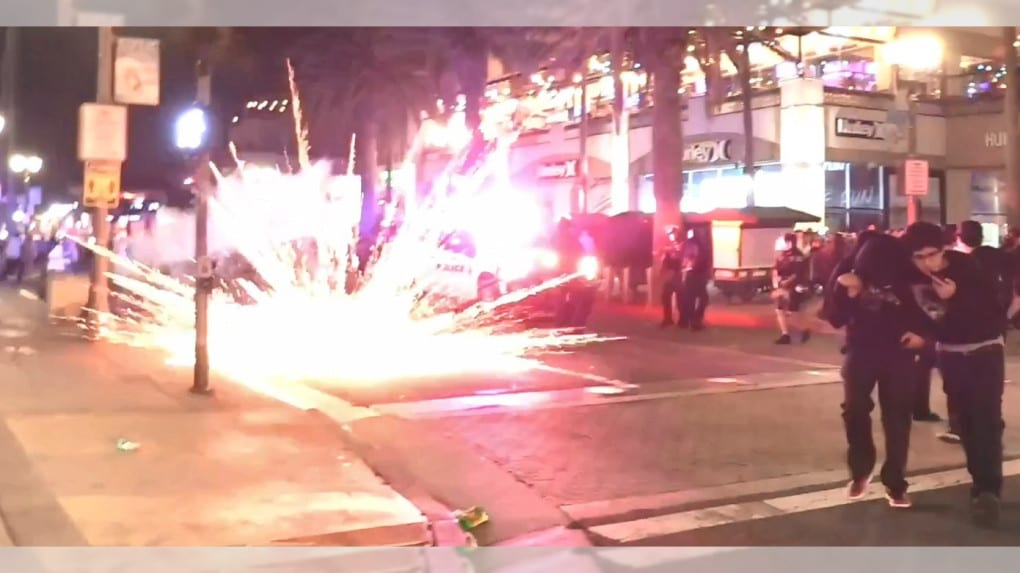 What started as an impromptu birthday party titled ‘Adrian’s Kickback party’ organized at Huntington Beach, California, via TikTok and other online platforms turned into a small-scale riot on Saturday night. The cops had to declare an ‘unlawful assembly’ because of a crowd that was going berserk. An emergency curfew was imposed from 11:30 PM for all individuals in and around Huntington Beach. Police from all jurisdictions of Orange County were called to control a crowd of people that was estimated in thousands. The attendees threw rocks and bottles at the police and lit fireworks which led to nearly 150 people being arrested under charges of vandalism, curfew violations, and failure to disperse. One police car was damaged with its windows being busted. Downtown businesses and beach guard towers were vandalized.

From what we hear, the party that was originally scheduled for Saturday night suddenly turned into a two-day affair. Several thousand party seekers showed up on Friday night itself in the beach area. Reports say that there were around a thousand attendees or more on both nights. At first, it was just a bunch of partygoers enjoying being in a large open area after several months in lockdown. However, soon some of them started confronting a large police presence in the area. Bottles were thrown at the police, and fireworks were set off, and some even climbed onto beach lifeguard towers and increased the use of fireworks. At this point, authorities had to disperse the crowds. We hear that pepper balls and tear gas were used in some cases.

The buzz started with a TikTok about a meetup called ‘Adrian’s Kickback’ by a user adrian.lopez517. The post went viral throughout the week, creating a hashtag that was viewed more than roughly 203 million times on the app. The sleepy beach town of Huntington had thousands of people gathered on both Friday and Saturday. On Friday, the area police tweeted that they were actively monitoring multiple media posts that advertised a massive gathering on the beach that weekend. They added that the safety & well-being of their residents, visitors, businesses & motorists was of utmost importance, which is why the Huntington Beach Police Department was taking steps to prepare for the arrival of a large crowd while working closely with their regional public safety partners. On both days, no major injuries were reported.

Funnily, till now it is unclear as to who Adrian really is, and several people have tried to claim the title. TikTok videos of the two nights seem to show hundreds of people on Huntington Beach, both walking through the streets and on the beach. There are even videos that show people saying they had flown to California to attend the kickback though we are not quite sure if they are for real. The beach party can was announced through a video that was posted on May 19th by the TikTok page adrian.lopez517, Adrian Lopez. The captions used were “pop out n celebrate my bday‼️‼️‼️ #partynextdoor #turnitup #SpotlightAPI #beach #projectx #function.The video displays a dancing scene and claims that the party will take place at the firepits of Huntington Beach with a 7:30 PM start. On Saturday the crowd is believed to have started to arrive at 6.30 p.m. It is unclear as to when people started gathering on Friday.

It was supposed to be the birthday bash of a certain Adrian. Sources say that a total of around 2500 people arrived at the beach. The name Kickback seems to have been borrowed from the name of a song by Adrian Hour, an Argentinian DJ and producer. A police spokesperson has told NBC Los Angeles that they arrested 121 adults and 28 juveniles on Saturday night. People were for vandalism, firing dangerous /illegal fireworks, failure to disperse, and curfew violations. Some videos show young people dancing, running through the streets, etc. Some of them climbed on stoplights, lifeguard towers, and police cars while firing crackers in an intersection and on the beach. The Huntington Beach Police Department said that they had been made aware of the party earlier in the week. So, they declared the crowd as an unlawful assembly a little after 7 pm and announced an emergency curfew beginning at 11.30 pm.