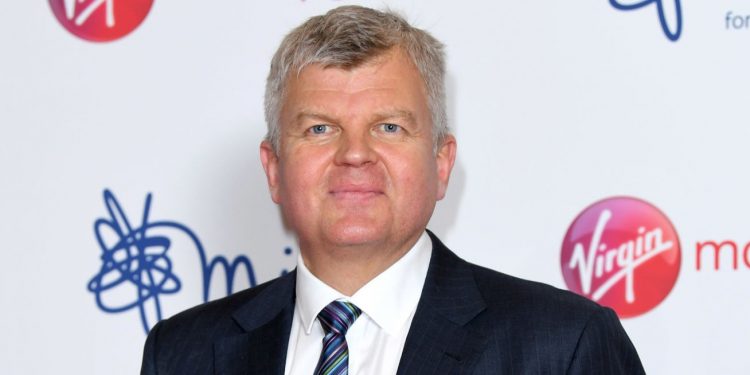 Adrian Chiles is a famous British television and radio presenter, actor, and novelist best remembered for his time as the host of ITV’s ‘That Sunday Night Show.’ He’s currently on the reality show ‘Drinkers Like Me,’ which has exposed his severe drinking habits. He was born in Quinton, Birmingham, England, on March 21, 1967. Adrian has blonde hair and blue eyes. He is 52 years old right now. Ljerka Chiles is his mother’s name, and Peter Chiles is his father’s name. He has a brother, but he has kept his identity a secret. His mother is Croatian, and his father is English. When Adrian was four years old, his family relocated to Hagley, Worcestershire. Adrian is of mixed origin and possesses British citizenship (English Croatian). Do you know Who is Adrian Chiles’s Partner?

He went to Haybridge High School for his study and graduated from there. Later, he enrolled at the University of London, where he earned a bachelor’s degree in English literature. He also pursued a career in journalism. Adrian is reported to have a net worth of around $2 million, which he has accumulated via his professional career. When he lost his job at the ITV in 2015, he began taking anti-depressants and drinking heavily. He is at risk of liver failure and death, according to a recent scan. He has promised to cut down on his alcohol use. The excellent actor does not appear to be active on social media platforms like Facebook, Instagram, and Twitter.

Who is Adrian Chiles’s Partner?

Adrian Chiles is currently leading a single life. Adrian was previously married to Jane Garvey, the broadcaster of Radio 4’s Woman’s Hour, in September 1998 in Swansea. However, after being a couple for more than a decade, their romance did not continue long, as they split in 2008 then divorced in 2009. Evelyn Katarina Chiles (born in 2000) and Sian Mary Chiles (born in 2004) are the couple’s two kids. When BBC Radio 5 Live debuted at 5:00 a.m. on March 28, 1994, Garvey’s was the first voice heard.

Adrian Chiles’s former partner hosted the station’s breakfast show and the relaunched Midday show, as well as co-hosting the Drive show with Peter Allen on weekday afternoons, for which she and Allen received four Sony Gold Awards. Garvey was born in 1964 in Crosby, near Liverpool. Ray Garvey is her father, and Maureen worked as a hospital receptionist. She attended Merchant Taylors’ Girls’ School in Crosby, a Merseyside independent school. She holds an English degree from the University of Birmingham.

Other Relationships of Adrian Chiles

Adrian was also in a love connection with Catherine Tate, a comedian. However, this relationship only lasted a year, ending in 2013. Catherine Jane Ford, better known by her stage name Catherine Tate, is an actress, comedian, and writer from England. Catherine has received multiple accolades for her work on the BBC sketch comedy series The Catherine Tate Show (2004–2007), including an International Emmy Award nomination and seven BAFTA nominations.

Tate was born and raised in the Brunswick Centre in Bloomsbury. Josephine, her mother, worked as a florist. Margaret in The Catherine Tate Show, who shrieks at the slightest disturbance, is based in part on Tate’s mother, according to Tate. Tate went to St Joseph’s Roman Catholic Primary School in Holborn and Notre Dame High School in Southwark, a ladies convent secondary school.

Adrian Chiles had said that when he originally told his family and friends that he would be seen in the Strictly Come Dancing Christmas special, they were “horrified.” The 54-year-old TV host and sports commentator admitted that he was “terrified” and “full of regret” when he first started rehearsals but now considers the experience a “true privilege.” With new professional dancer Jowita Przystal, Chiles would do an American smooth to Otis Redding’s rendition of White Christmas. Previously, the TV star Adriana admitted that he would only dance alone without a mirror because Adriana would be “filled with shame and paralyzed” if he did so. His professional partner, on the other hand, said that after a few weeks of training, he began to loosen up and gain confidence in himself.

Adriana Chiles Has A Long And Illustrious Career

Also Read: Are Madelyn Cline And Zack Bia Dating? All About Their Relationship