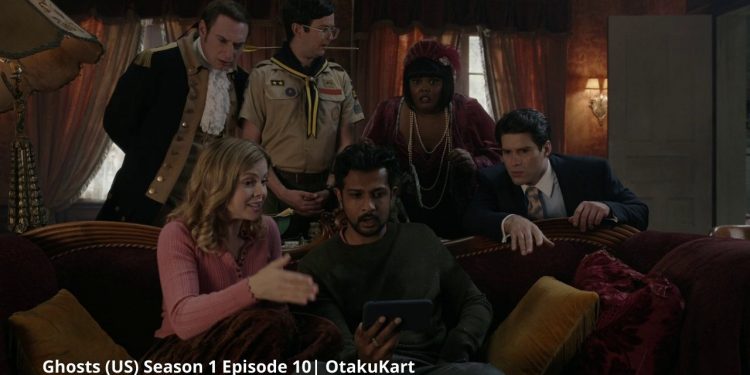 Ghosts (US) Season 1 Episode 10 sees a renowned wedding planner visiting the Woodstone Mansion. The only thing is Jay is not in his right self, and things may go down if Samantha doesn’t take care of it. Before we move to the same, recently on the show, we already had another visitor who almost died. Not because he saw ghosts but because he was obsessed with the career of one of them. For starters, he seemed like a fine man, but as Samantha and Jay got familiar with him, they started realizing something is wrong with this guy.

So, Todd Pearlman, a historian was the new guest staying tonight at Woodstone Manison. The main motive of his was to study Alberta Haynes. He is a huge fan of her music and wanted to investigate her death. He believes there is conspiracy behind it and there were many who were jealous of her voice and talent she had. Alberta, on her side, was happy to realize that even in 21st century she is remembered for her music. Things took a another turn when Samantha and Jay cooked him expired chicken that might be the reason he would be dying now. Lets find out what happened.

Previously on Ghosts (US) Season 1, we opened up with Mark dropping his son David at Samantha’s for a day. David can actually see ghosts. That’s not something to worry about for now as he is a kid. A historian named Todd Pearlman came all the way here to study Alberta Haynes’ music and her history. He believes Alberta died in this very home and he is here to figure out more about her. With that, he also reveals about a book he is working on specifically about Alberta and a museum about her he has.

Alberta is quite happy and intrigued that she might be famous in the 21st-century world. There are people who are still listening to her music. So one of the things he is here to investigate is how she actually died. It wasn’t a heart attack, and seems like someone murdered her. She was talented, so she had many rivals. Alberta sees herself stalking him while Jay and Samantha make sure they make him feel at home.

So, the first thing is to cook Todd something, and all Samantha and Jay have chicken with an expired date. Samantha believes the only reason there are expiry dates is so that people could buy more. So it’s fresh, and Jay somehow agrees to cook this and feed Todd. Step by step, Alberta, Jay, and Samantha start figuring out that Todd is weird. First of all, he is the only fan of Alberta, the museum he talked about is his mother’s garage, and the book’s release is still a question as he is self-publishing.

Alberta found herself heartbroken that she didn’t get what she wanted. She wasn’t famous in her days, and there was hope people would remember her music. Even that went crashing. Until Todd passed out, and Samantha and Jay are afraid they might have killed him as they fed him expired chicken. But he survived, and he confessed that he drank an old bottle of Moonshine, which was poisoned. He believed Alberta last drank from this, and so he wanted to do that too. With that, he found out it was poisoned, and Alberta was murdered.

So, coming to circle, the internet bashed on Todd. But through the same video, they discovered Alberta’s music which started going viral as well. The episode came to a close, with Alberta receiving the fame she deserved. Elsewhere in the episode, Thorfinn and Hetty connected over a song and walk that took them to their past.

Ghosts (US) Season 1 Episode 10 is releasing on 9 December 2021. It is titled “Possession”. The official synopsis of the episode suggests Jay finds himself electrocuted. A renowned wedding planner is at Woodstone Mansion to help Samantha and Jay out, But Jay isn’t in his right self at this point, leading Hetty to possess him. Samantha and Hetty inside Jay needs to make sure that do things right, so the couple gets what they dreamed of for their wedding. Check out the official promo for Ghosts (US) Season 1 Episode 10 below.

Ghosts (US) Season 1 Episode 10 Release Time & Where To Watch

Also Read: Is This A Farewell From Harry Or Are We In For More With The Sinner Season 4 Episode 9?