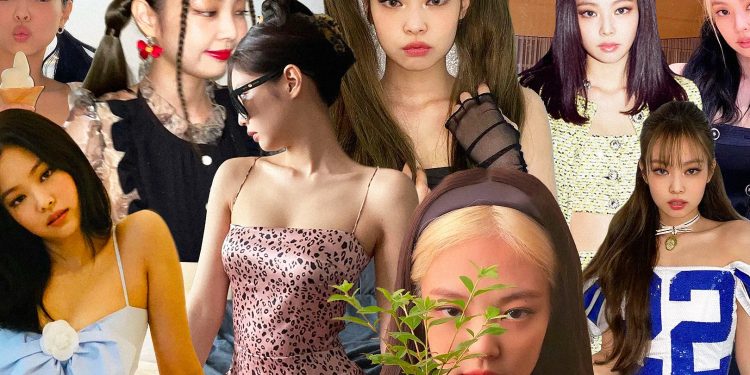 The Stan Twitter is a crazy place and Kim Jennie is one of the most popular k-pop idols on the existing earth. She is one of the best and talented to come out of YG Entertainment. Being in her early 20s, she holds to power to rule the stage with her rapping and dance skills. And it’s no lie that Jennie has gone viral various times for the smallest things. From living alone in a different country to coming back to become an idol trainee and debut as one of the biggest and groundbreaking k-pop girl groups in the world. Kim Jennie has sure come a long way.

Currently working on her upcoming collaboration with the South Korean Eyewear brand ‘Gentle Monster’. While her being the face of Chanel has been gracing her social media accounts. With her upcoming collection ‘Jentle Garden’, a certain bouquet of flowers has gone viral in the country. A bouquet of orange flowers is tied on the back of girls as they cycle through their cities in the country. The small promotion is making a bigger move and getting viral on the internet. And this isn’t the only time Jennie had her moments that went viral.

Here Is A Look At the Top Four Moments When Jennie Got Viral in 2021!

On December 23, Jennie went on to share a dance cover on her Instagram account, making it one of the most recent viral moments of the year. She can be seen dancing to ‘Sad Gurlz Luv Money Remix’ by Amaarae, Kali Uchis, & Molly. Jennie’s dance moves and the control over her body have been going viral on stan Twitter. The netizens have been praising her for how gracefully she does this. While many fans have been calling her the all-rounder artist as her new collection is on the way.

Jennie Had One Of Her Viral Moments Meeting Lee Jung Jae!

After Netflix’s original ‘Squid Games’ hit the world with yet another Korean wave. Making a comeback with the global hit, Lee Jung Jae is enjoying his fame once again. So when he went on to attend the LACMA Awards in Los Angeles, and met Kim Jennie. The ‘Squid Games’ fandom and the blinks were losing their minds. Sharing the video of them together, Jennie could be seen smiling with excitement. Jung Jae can be seen having fun using social media and sharing the moments. The video went viral on stan Twitter, was flooded with the fans telling the actor and the idol how cute they look together. While one fan also mentioned how Jennie’s mom named her after the actor as she’s a big fan.

When Jennie Shared The Pictures Straight From Her Bedroom

Becoming one of the most popular Asian artists in the world, breaking the internet with her effortless selfies is nothing new for her. Jennie’s Instagram is no lie, such a pleasant treat to the eyes. Filled with pictures of her friends and her selfies. So when Jennie decided to post some pictures straight from her bedroom. Enjoying the summer of 2021 in the calmness of her home. Fans were quick to lose their minds looking at Jennie being her beautiful self effortlessly.

When Jennie’s Got Into A Dating Scandal With Her Senior

A k-pop idol having a dating life doesn’t sit well with the netizens. So every time Jennie got spotted with a potential boyfriend or even a male friend, she was bound to get viral. The most popular ‘dating scandals’ involving Jennie have been when once she was spotted with Exo’s Kai. Netizens were quick to suspect that they were dating, but none of the idols confirmed anything.

If to mess things up a bit between the two fandoms, YG went on to tweet that Kai was actually Jennie’s Uber driver. She has also been linked to YG’s gem of music producer Teddy Park and she is recently in news for being in a relationship with G-dragon. Although neither Jennie nor G-dragon or YG entertainment has given any statement regarding the relationship.