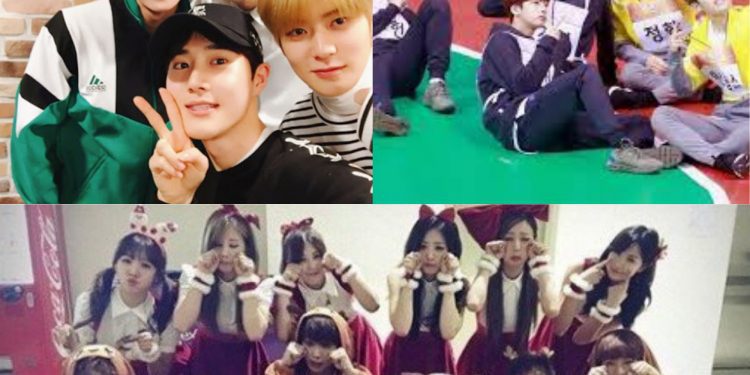 K-pop Friendship That Nobody Expected

The world is full of unexpected things. But the K-pop industry has so many things that not just the people but the fans find hard to believe too. Let it be how easily it is to offend the netizens. Or get to know that your favorite idol was supposed to debut with some other group. The list is endless. But something that surprises the fans the most is the idols being friends with other idols. While it could be completely normal things, sometimes it comes as a complete surprise when you get to know how long they’ve been together. Gone through the same yet different paths and are still friends. So here are some of the friendships that we were unaware of and nobody expected would ever happen in the K-pop Industry!!!

Frome being old trainees and parting ways during their debut. To going to school together or bonding through the ruthless idol trainee programs, many idols have been through a lot, and sometimes it is the friendships that have kept them going. And looking at them for the first time in public goofing around while we thought we knew everything about them makes us go, ‘when did this happen???’

Monsta X and Seventeen have been friends ever since they made their debut in 2015. And watching their connection with each other, fans were so shocked. But their bromance was enough to melt everyone. Their friendship began when they shared the stage at 2015 MAMA Hong Kong and absolutely rocked it. They became each other’s fans and were seen hyping each other up during live performances. Jamming to each other songs in their fans meets, and even crashing each other’s VLIVEs. And just like the idols, their fandoms love each other too.

Also Read: Male K-pop Idols Who have Appeared on TC Candler’s list of ‘100 Most Handsome Faces’ in 2021

BTS’s J Hope and Monsta X’s Hyungwon are best friends. Who would’ve known, right? The two idols have been close friends ever since their training days. Before parting their ways, going under different companies, J Hope and Hyungwon used to attend the same dance academy. Both idols even consider each other as ‘close brothers.’ Their ‘secret’ friendship made headlines both idols found themselves together on the stage of the KCON’s concert. And the besties couldn’t stop smiling looking at each other, and J Hope started teasing him on stage. And by the end of the concert, they were by each other’s side catching up on stage about all the times they’ve missed. Their handshakes and hugs are one of a kind, and they never want to say goodbye.

SKZ’s Bang Chan and Everglow’s Aisha are friends. Who would’ve thought? The two idols are under JYP Entertainment and have been friends since their trainee days. Bang Chan went on to reveal that they met each other when he was in eighth grade, and Aisha was in sixth grade. Talking about Everglow’s new single in one of his VLIVEs in summer 2021, he revealed he remembered how he saw Aisha was so short. But now he’s the one smaller than her, making the fans chuckle a bit. Whenever the two friends meet, they love to stay and chat a bit to catch up about their trainee days.

During one of his interviews in early 2020, NCT 127’s Yuta revealed that he’d been best friends with Pentagon’s Yuto for a long time. The fans were already putting the pieces together about their friendship when they saw Yuta go to a bowling alley with a friend who was too familiar. They went on to confirm with Yuto, too, in one of his lives right after. Both idols are from Japan and have been friends for so long. From going bowling together to jamming to each other songs and going live together for fans, Yuta and Yuto are friendship goals, and fans were freaking out when they got to know about them spending time together.

GOT7 and Monsta X

It’s no longer a secret that Shownu used to be a trainee at JYP Entertainment. But fans never expected that he was supposed to debut years ago with GOT7’s Jinyoung and JB. So when the friendship between Shownu and GOT7 was revealed, it was very unexpected for the fans. The friends had a reunion on a variety show when fans saw Jinyoung talking about how he cried when Shownu left. Now both GOT7 and Monsta X have become close friends thanks to the old besties and the variety shows. The fans saw all the boys fooling around with each other at 2016’s Idol Star Athletics Championships when they had to compete with each other. And their rap battle at KCON’s backstage was something that made the fans wish for themselves to have the same friendship. Minhyuk even became a backup member for GOT7 at one of their shows just for fun.

The group of 97liners came as a shock to fans, but it didn’t take long for them to aww over them. Known as the ’97 liners squad’, the group has BTS’ Jungkook, GOT7’s Yugyeom and BamBam, SEVENTEEN’s Mingyu, The8 and DK, ASTRO’s Cha Eun Woo, and NCT’s Jaehyun. The best friends seem like they come straight out of a high school k-drama that every girl swoon over. It all started when Jungkook and Yugyeom became besties, and soon they were joined by BamBam and the others considering they are the same age. While what the best friends do backstage still remains the backstage. They do share some stills on social media, and it’s very easy to get jealous of them.

When it was revealed that NCT’s Johnny was actually supposed to be in EXO, netizens were shocked. But looking at the members still being friends ever after the years melted everyone’s heart. Considering they trained together for ten years, Johnny is really close to Kai, Chanyeol, Suho, and Sehun. Their pictures from their trainee days have gotten viral on the internet, making fans aww over the idols’ puberty pictures. And wondering why Johnny didn’t debut with EXO. Johnny and the members of EXO can be seen hanging out together, eating, and posing for the camera. While in some, he can be seen following the iPhone picture trends with his friends, taking mirror selfies. But we all know everyone’s much happier with Johnny being an important part of NCT.

Astro’s Moonbin and Gfriend’s SinB’s friendship came as a shocker to the fans when they got to know that the idols have known each other since they were eight years old. Their houses were right next to each other. And the idols have been working together as child actors before debuting as idols. Joining each other at the same dance academy, now the friends are all grown up and have become such talented people. Whenever sharing the stage, the best friends can often be spotted together teasing each other in the corner—or having a friendly banter in public. The friends have also been very supportive of each other’s careers.

Coming from CUBE Entertainment, the members of APINK and BTOB have been friends ever since their debut and trainee days. They are often seen together hanging out with each other at the company or sometimes having nights out. The members are so close that they even consider each other their siblings. Especially Ilhoon and Son Naeun have known each other since 2009 and are really close.

They even talked about how they met and how good they knew each other when they came on MNET’s variety show back in 2019. That left the fans awwing at their friendship. After all these years of the groups being friends, there hasn’t been a single dating rumor about either of the members.