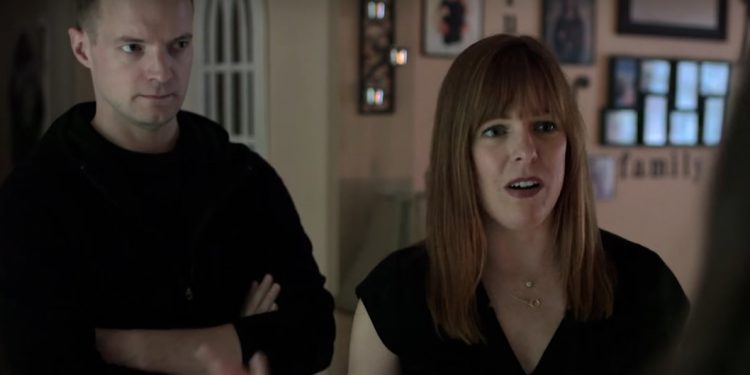 Kindred Spirits Season 6 Episode 5 takes us to a tiny house with a lot of issues, mainly ghost issues. And Amy, Adam, and Chip go to great lengths in this episode to try and get to the bottom of the problems. For one part, we see them installing some equipment in the house to facilitate detections and communications, and for another, they become amazed by what they find.

Firstly, Kindred Spirits is a paranormal tv and reality docuseries that airs on TLC and Destination America. Secondly, it stars Amy Bruni and Adam Berry, whom you might recall from their participation in another couple of paranormal shows called “Ghost Hunters” and “Ghost Hunters Academy”. In this show, the crew and hosts go all over the country in search of haunted places with history and try to unearth their secrets. Now without any further ado, let’s begin taking a look at what Kindred Spirits has in store for us here at Otakukart.

Who is Behind Kindred Spirits?

Adam Berry and Amy Bruni are at the center of the show, always on the lookout for bigger places, creepier houses, and creepy historical sites. ‘Kindred Spirits’ is also enhanced by the two super calm and rational hosts. These tales of treachery, unfairness, and murder make us want to root for the detectives even more. We want them to get to the bottom of things. We need them to assist us. ‘Kindred Spirits’ is one-of-a-kind because it combines legacy, travel, and the paranormal.

Adam claims to have had a spooky upbringing. His fascination with the supernatural stems from his own personal experiences. In 2010, he won a spot on ‘Ghost Hunters’ after competing in the Ghost Hunters Academy. Adam is a well-known scientist. He’s a great host because of his calm demeanor and passion. Amy’s first paranormal experience occurred when she was six years old. Rather than living in fear, her family urged her to embrace her connection with the spirit world. In 2007, she joined ‘Ghost Hunters,’ turning her hobby into a full-time job.

Amy is a firm believer in uncovering the truth and interacting with spirits with compassion. The brilliant emotional and spiritual medium Chip Coffey adds a dash of levity to the series. His appearances are always fascinating, and his dynamic with the hosts is something to keep an eye on. In Season 6, Adam Berry, Amy Bruni, and Chip Coffey are also expected to return.

Kindred Spirits Season 6 Episode 5 was released on January 8, 2022, and in it, Adam Berry, Amy Bruni, and Chip Coffey went to a little house to investigate a big paranormal issue. Firstly, it turns out that in this tiny little place, there was some sort of specter haunting it. To prove its presence, the team used a series of devices. One of them was the “Para-Lamp” a gadget that detects electromagnetic fields and renders different colors of light, which represent the fortitude of the electromagnetic field. Coupled with an alarm, Amy placed several lamps in key places.

Later on, we saw the guys put some proximity sensors which generate electromagnetic fields around the objects and make sounds when a field of proximity becomes disrupted. Then, Amy sets a series of tripwires along the hallway of the house. Along with the episode, the guys become worried that somebody else besides the crew is in the house, causing a ruckus. Amy summons the spirits and tries to record their voices.

Where to Watch Kindred Spirits?

If you want to watch Kindred Spirits, tune in to TLC, Travel Channel, or Destination America during its airtime. Firstly, consult your local guide for times. Alternatively, if you want to watch this program online, you can tune in to Hulu + Live TV, the Travel Channel website, and Discovery+. On this last point, Discovery+ is a great place to watch shows like Kindred Spirits because the platform gathers all the content from Discovery and its filial networks, which means you get channels like TLC, HG TV, Discovery Plus. Animal Planet, Discovery Kids, and many others.

Kindred Spirits season 6 episode 5 will release on January 15, 2022. Firstly, this episode will be titled “Toxic Relations”. Secondly, the official synopsis —albeit brief—  claims that this episode will center around a 100-year old house that was stricken by tragedy. In that estate, several of its occupants died in weird circumstances. And thanks to that, their spirits still inhabit the house. With this, we conclude our coverage of this topic here at Otakukart. Thank you for reading our article, and please keep coming back to our website for more daily updates on all your favorite series and shows.