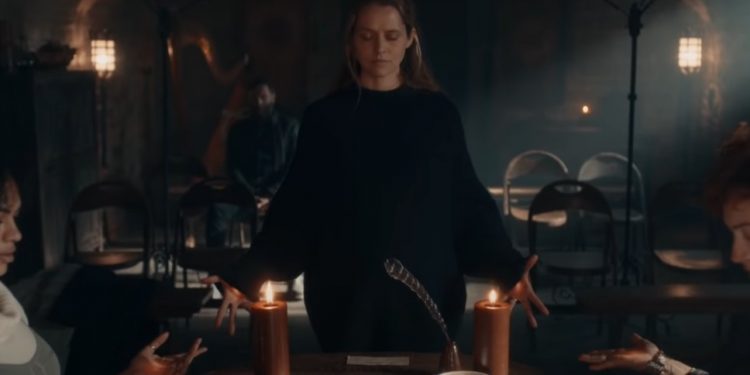 A Discovery of Witches Season 3 Episode 2

The final season of A Discovery of Witches has just begun. And in “A Discovery of Witches Season 3 Episode 2”, and this installment has demons, witches, and vampires altogether. Sounds scary and fun! Why, because all of these are out for each other’s necks! The Covenant is broken, and the De Clermont’s are out for blood. And if that’s a fast-paced thing, wait until the next episodes pop out!

If we remember a few things from last season, Diana and Matthew returned in the final chapter from the past for the battles of the present. And we will see the fallout from a lot of things. It will be heartbreaking, as all battles are, but in the end, only the strong survive. All bets are off in this final season. And now, without any further ado, let’s see what this battle of witches and vampires has in store for us here at Otakukart. So let’s begin!

A Discovery of Witches: Episode 1 Matthew and Diana return from their trip in the 16th century in Season 3. Emily passes away after Knox’s fight in the graveyard last season. While Sarah tries to process this information, Matthew informs the family that Diana is actually expecting two children. Two heartbeats are heard… Is this enough to restore the balance between the two races? Soon after, another visitor, Gallowglass, arrives, and the house descends into mourning over Emily’s death. Matthew, who is bloodthirsty, is still out for vengeance. The problem is that simply killing Knox will turn him into a martyr. As a result, they must devise a different strategy to eliminate him.

The ongoing blood rage killings make things even more complicated. These assassinations have piqued the public’s interest in Oxford. The “Vampire Diaries” has been coined by the media to describe the situation.  Following the meeting, Matthew confronts Marcus about what has occurred. He accuses him of failing to protect the witches while casually accepting his relationship with Phoebe, who tries in vain to win Matthew’s approval.

In the meantime, Diana speaks with Sarah about Em’s forebodings. She was convinced they required Rebecca, but this goes against her own teachings, which specifically forbade Em from engaging in higher magic. Sarah even suggests that they communicate with Emily from beyond the grave. Eventually, the family comes together to properly honor Emily’s death, holding a beautiful ceremony to see her off. As a result, Knox joins the vampire council, and Agatha Wilson appears to be speaking. However, before she can speak, the bloodshed in Oxford is discussed. Satu chirps up and claims that no creature is safe, while Domenico reports that he fought the vampire.

Knox is excommunicated from the council when the situation culminates in Em’s death. He promises to get payback on Agatha and the others just before he leaves. This frightens her enough that she calls Marcus and tells him to leave with Sophie and Margaret once Knox returns. However, Knox isn’t the only one vowing vengeance. Diana, too, vows to exact vengeance on him for what he’s done to their family. While she is discussing this with Sarah, Baldwin arrives at Sept-Tours, putting a major dent in Diana’s plan. He tells Matthew to stay away from Knox.

Rather, he wants Matthew to cope with the out-of-control vampire. A very awkward dinner is also a part of this deal, in which Baldwin puts up a guy named Benjamin. Now, Matthew has ties to Benjamin because he is Matthew’s son, but Diana is convinced she has met him before when he was known as Fuchs in Bohemia. The dinner ends with an eerie warning – anyone who isn’t a De Clermont should leave in the morning, with the Congregation watching. Despite Marcus’s best efforts to bring the family together by urging them to hold a scion, everyone flees to London before things get out of hand.

Back in London, Diana enlists Chris’ assistance in finding them a lab to work in. They need to figure out what’s causing the killer’s bloodlust before he strikes again. Chris checks the bloodwork charts after a quick catch-up, trying to make sense of what he’s seeing. Diana and Matthew quickly reveal their true identities. Conjuring up watery flowers, specifically, through a lovely bit of magic. Diana and Matthew urge Chris to try to find a cure for Blood Rage, and this is enough to prove their worth. As the episode comes to a close, Domenico confides in Baldwin. He has pictures of the killer and makes fun of Matthew and Diana because the murders happened close to their home. The problem is, this killer isn’t one of them… Will Baldwin be persuaded otherwise?

Where to Watch A Discovery of Witches?

Firstly, if you live in the United Kingdom, simply tune in to Sky Max at the airtime to watch A Discovery of Witches series 3. Alternatively, you can watch it online via its web services. Secondly, if you live in the United States or Canada, you can watch the show via Shudder, AMC+, or Sundance Now. If you wish to catch up with the show, the program is available via Hoopla, Amazon Prime Video, and Club Illico.

A Discovery of Witches Series 3 Trailer

A Discovery of Witches Season 3 Episode 2 will release on January 14, 2022, at 21:00 on Sky Max. Firstly, all episodes air on Fridays first for the UK public, and on Saturdays for the American public via AMC+, Shudder, or Sundance Now. Secondly, A Discovery of Witches season 3 will consist of seven episodes, each of which will go at 45 minutes run time. With this, we conclude our coverage of “A Discovery of Witches” here at Otakukart. Thanks for reading our article, and please keep coming back for more daily updates on your favorite series

Also Read: A Discovery Of Witches Season 3 – Renewed or Cancelled

In ‘And Just Like That’ Season 1 Episode 7, Carrie Moves On From Mr. Big’s Death