The scattered 126 struggles to rescue everyone during an ice-storm that has hit Austin. 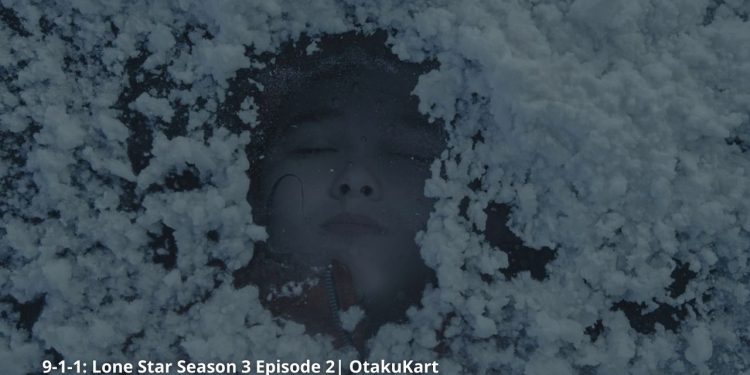 9-1-1: Lone Star Season 3 Episode 2 will see the ice storm continue to wreak Austin. On top of that, 126 are not together anymore and find themselves scattered. Owen is not here to lead them. As it turns out, he may have talked about getting back up and fighting back. Now into the future, he doesn’t see a point in that and just wants to see life pass by as he has quit his job settling in a cabin. Only a few out there, like Marja, have some hope of protecting 126, hoping it will see the light someday.

So while Marja found out about Owen, she decided she would anyway travel through the storm. She will confront him for abandoning them. Amidst all of this, the rest of the team sees themselves responding to multiple emergencies. These go from a boy trapped under a frozen pond to a man hit by an ice sheet on his neck. Then a complete building full of homeless and people looking to stay warm falls apart.

Previously on 9-1-1: Lone Star Season 3, we opened up back in May, which saw Owen pleading his case against Billy Tyson. Unfortunately, Owen will be on temporary suspension. The rest of the team will continue to work on their temporary assignments while 126 remains shut for now. Owen encouraged his team that they would fight back no matter what. Cut to the future in January 2022. It seems like the 126 is still not up and running. Owen has left his job to settle down in a cabin while the team is still active here and there. Moreover, an ice storm is hovering over Austin.

While everyone is busy with their life, Marjan is probably the only one who is still fighting for 126. It was a demolishing day, and she decided to cuff herself to the building of 126. Although the construction crew called cops, they had to back away anyway due to the storm hitting the city. Carlos later came to arrest her and tell her there was no point in fighting back.

An adventure-struck duo of boys tries skiing in the city. Until a sheet of ice from a truck comes attacking one of them. The sheet was stuck on his neck. Mateo cuts the ice before the boy Tommy’s team could pick him up. Still, the man was about to bleed out, which led Tommy Vega and her team to build a shield around his neck in order to save him. Carlos responded to another call about a furniture store break-in where he found two people trying to stay warm and brought them to Providence Pasture. A place for everyone.

Amidst all of this, Tyson bails out Marjan, and she finds out that Owen actually abandoned them. She leaves to meet Owen, who doesn’t want to come back. After fighting all these years, he just wants to watch the world go by. Meanwhile, back at Providence Pasture, the building starts to fall out, leading Carlos to shift everyone back to that furniture store where the owner whole-heartedly welcomes them. One of them is still missing, leading Carlos back to the Providence Pasture building.

Providence Pasture is completely destroyed with the collapse. Entering could lead to another one. No one knows if the missing women survived the first one. The episode came to a close with Owen discovering a man in need of help and Marjan crashing her car as well.

9-1-1: Lone Star Season 3 Episode 2 will be released on 10 January 2022. It is titled “Thin Ice”. The official synopsis of the episode suggests that the ice storm continues to wreak havoc in Austin. In the previous episode, a couple also had come across a boy stuck underwater in a frozen pond. A couple was saving tortoises and, in the process, found him. The synopsis suggests Tommy, T.K., and Gillian responded to that call and are out there to rescue him.

Owen, meanwhile, is trying to save a man who is seemingly stabbed. There is a communication problem and risk of the attacker being around. Also, we are yet to find out what happens to Marjan, who saw her crashing towards the end of the previous episode. Does anyone come to her rescue in the heavy storm remains to be seen as well? Probably an unexpected one like Tyson.

9-1-1: Lone Star Season 3 Episode 2 will be airing on Fox at 8 pm ET in the United States while in Canada on CTV at the same time. In India, 9-1-1: Lonestar Season 3 Episode 2 will be available to stream on Disney+ Hotstar hours after its broadcast. In Australia, the show usually arrives on v-o-d service of 7plus, but Season 3 is yet to hit the services, so we are still down about the second episode showing up.

Also Read: Is Angela About To Take Down Dexter In Dexter: New Blood Season 1 Episode 10?

Stunning Shigaraki Tomura Cosplays Every MHA Fan Should Check Out

Final Fantasy Origins: Everything We Know