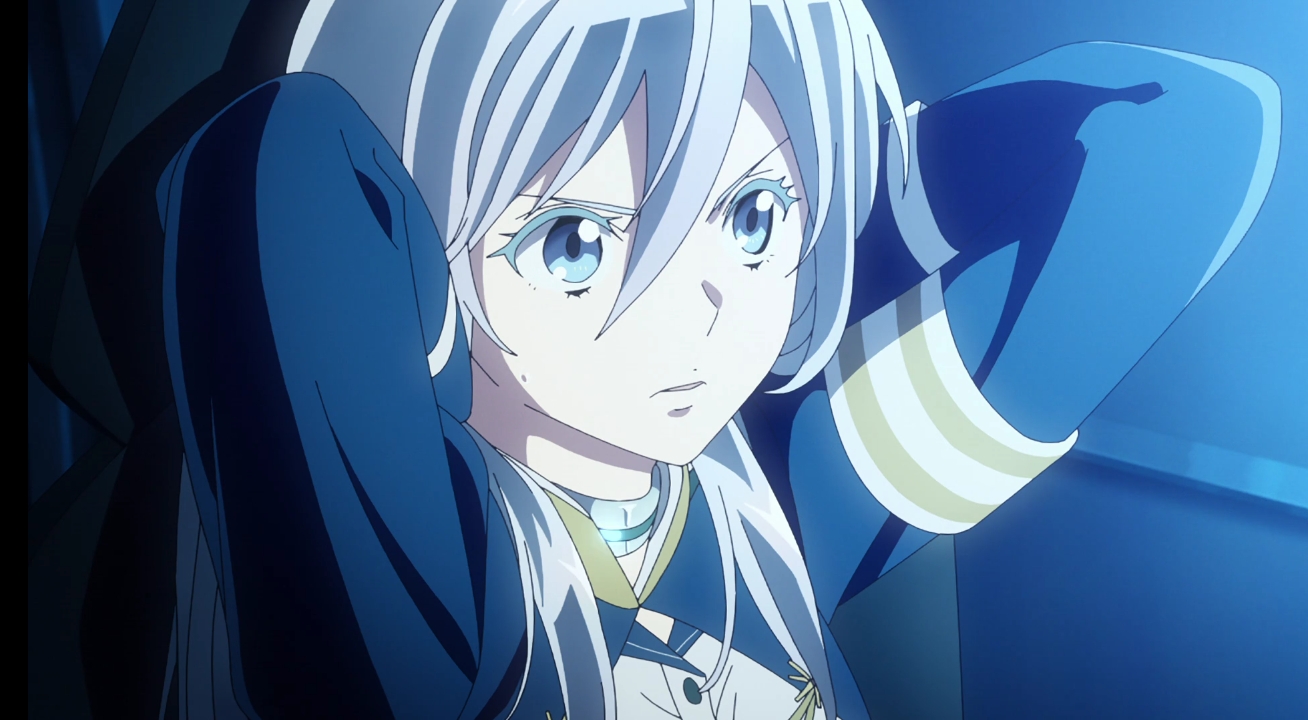 Mecha series has been trending over the years. Following the light novel by Asato Asato, A1 pictures have brought us a sci-fi anime filled with drama. The anime was first announced in March 2020. Before the anime actually aired, the produced left no attempt at hyping up the audience and released three PVs for its promotion. The anime originally broadcasts in Tokyo MX, BS11, GYT, GTV, ytv, and CTV. It was further licensed by Crunchyroll and VRV for an international broadcast. Eighty-Six episode 1 came out on April 11, 2021, at 00:00 hours JST. It is scheduled to release new episodes every Sunday at the same time.

Eighty-Six episode one has had a good reaction from light novel readers. The anime is about an ongoing war between two neighboring countries, Legion and The Republic of San Magnolia. Legion is a country with sophisticated technology. The Republic is only growing in terms of technology. Legion sent troupes of drones that are remotely controlled to wage war on The Republic. Although they initially lost, The Republic developed their own drones to fight back.

How the plot turns out ahead in the next episodes will be something to look forward to every Sunday.

Spoiler Alert: This content carries spoilers from 86 Eighty-Six episode 1. Do not read ahead if you haven’t watched it and don’t want it spoilt for you.

In the stellar year 2148, a chaotic war between the Legions and The Republic of San Magnolia breaks out in the first scene. Someone who continually refers to the enemy as ‘pig’ is heard.

The scene changes to the room of Vladilena Mirize, who is often called Lena. After waking up, she takes a pill and heads on with her daily life. A fine series of scene lead the viewers to see what life in The Republic is like. The population consists of people with silver hair, indicating the high and noble class. Lena dresses up in her uniform as she is in the military. She carries a serious look as she walks to her office. On her way, a screen reports the daily weather followed by a piece of news where it is reported that another battle against the legions was won and there were no fatalities.

When she reaches the office, we are given a peek at the military of The Republic. Other officials are quite unlike her. The office is filled with drunk military men who are celebrating the recent win. A man picks on Lena for her habit of treating their drones with care. She almost gets into a fight with him but is stopped by another woman in a lab coat. She is introduced as Annette, a researcher who works on the Para Raid system. This system enables the military to connect with their drones. Annette tells Lena that it was not the man who was weird, but Lena for treating the drones like people.

Lena works in the military as a Handler. Handlers in this world are people who control drones using the Para-Raid device. She talks to the processor on the other end. It is revealed that the drones being functioned remotely was a hoax. These drones are actually operated by people called Eighty-Six. These people belong to an unofficial area of The Republic, called Eighty-Six and hence the name. While most people treat them as mere stock, Lena is kind to them and values their life. Their lives are seen as valueless to the point that their sacrifice in war is not even recorded.

Following progressive work as a handler, Lena is appointed to be the Command and control officer of the Spearhead Squadron. However, Jerome, the officer in charge of her promotion, warns her about this elite batch of Eighty-Six. As per reports, previous commanders of this squad often meet ill fate. There have been rumors that the commanders heard the sounds of dead soldiers. Some left in fear, and there have also been cases of suicide.

She accepts the job and heads towards Annette to have her device settings changed. Here we are given more insight into the device. The Para Raid device connects the sensory data of a handler with another person. There is a possibility of people losing their insanity since a part of the brain is pressurized. It is so far safe since only the auditory senses are shared. However, if complete senses are exchanged, it could cause a mental imbalance in the connected people.

The people in The Republic consume artificial food. Contents of their food product are unclear, but so far, it has been cleared that real food is a luxury in The Republic.

Also Read: The Way Of The Househusband Season 2 Confirmed On Netflix

In the last arc of episode 1, we finally see the elite group of Eighty-Six, the Spearhead Squadron. The squad is led by Shinei Nouzen. Unlike the main country, the Eighty-Six have varied hair colors. They seem like they are living their life to the fullest. Food necessities seem fulfilled by a poultry farm. Posters on the wall have crossed of names of the previous handlers of the squadron.

They are equipped with devices on their ears. In a war, one of their comrades is badly injured. To free him from the misery, Shinei shoots him. Life of the Eighty-Six remains unaffected as they continue living their lives. Outside, the corpse of a person sits on a bench with big words that read, “F**kin’ Glory to the Spearhead Squadron!!!”.

The episode closes with the voice of Lena introducing herself to the squad.

The first episode of 86 Eighty-Six was very powerful. It is a bit difficult to understand amidst the new terms used. However, once one gets used to it, they will realize how amazing the first episode was. The episode feeds introductory information useful to know the progress of the story. There is a strict tension between the stereotyped treatment of the Eighty-Six as machines and Lena’s constant disapproval of it. 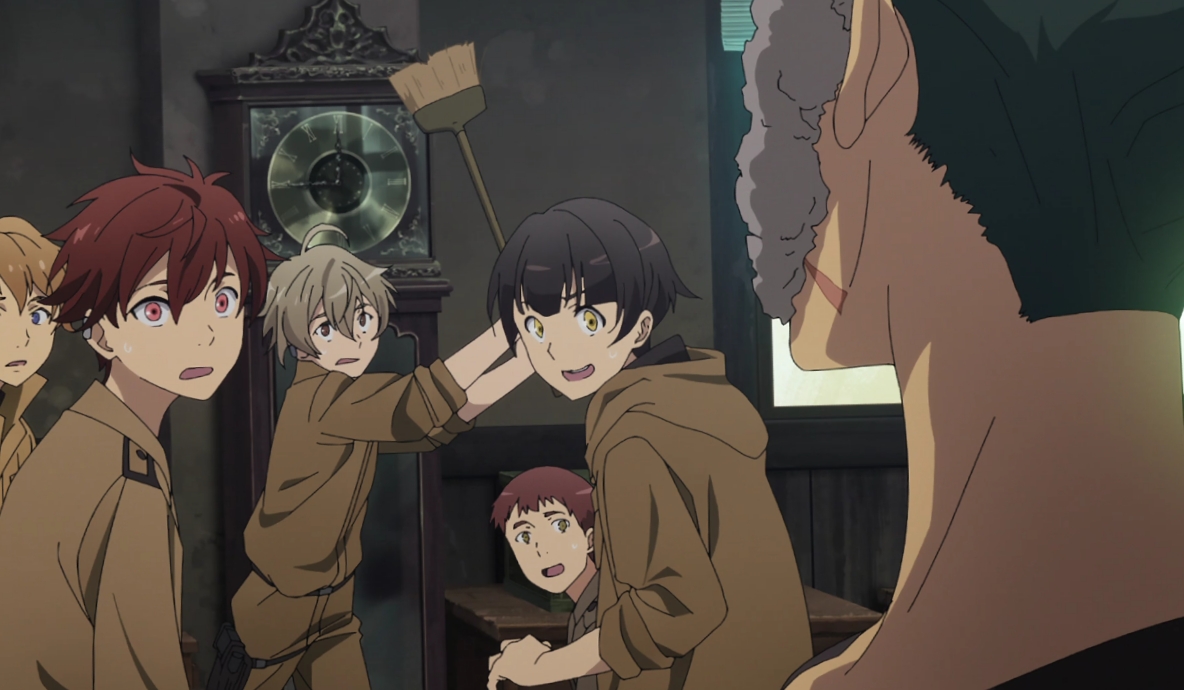 The anime is constantly trying to indicate the difference in lifestyle between those who go to the war and the common people. The sudden change in a scene from Lena and Annette’s fun session after Lena drops the cream puff to the lives of Eighty-Six in a barn was a beautiful transition. The same is repeated when the scene of the comrade who was playing with the cat switches to the scene of a war, depicting in clarity the varied lives of these people in different circumstances.

The initial portrayal of The Republic filled with only silver-haired citizens and the characters towards the end having colored hair was a good contradiction. For a mecha anime, the art style is adequately filtered with pale colors rather than brighter shades. The quality of the art in this anime is high, and it gives a sense of peace to witness anime in such clarity.

The first scene in the anime starts with a battle between Legion and The Republic. The CGI here was worth appreciating. Minute details like the uniform of the military in the city, as well as those in the Squadron, was nicely done too.

For anyone who loves a strong female character, this could just be the anime they would want to watch. I loved her strong spirit despite being picked on. Instead of lazing around, Lena is the kind of character who would make a change.

The Eighty-Six within the Spearhead Squadron has a very likable personality. On a longer course, these characters are sure to win the hearts of the viewers. I can already picture tragic tears if even one of these were to meet a tragic end.

From the first look, 86 has set a great first impression. It has a good amount of suspense regarding the secrets of The Republic. There are a lot of important questions that Episode 1 of 86 Eighty-Six raises. It is definitely worth looking forward to these answers in the upcoming episodes.