Since their initial days, BTS has been shattering the male beauty stereotypes and reforming a new meaning of fashion and grace. Get to know how they have been doing this! 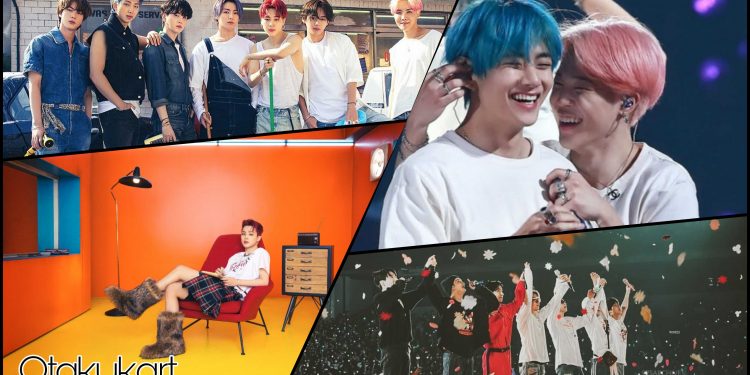 It’s a truth universally acknowledged that BTS is currently the most popular boyband with a huge army of fans supporting them. Be it their music, their style, or simply their personalities, it’s hard not to love the Bangtan Boys. However, if we flip the coin, we can see how, with their increasing popularity, misogynistic, xenophobic, racist, and overall ignorant misconceptions are on the rise too. It’s a fact that western culture is very different from Asian culture, but no one’s culture asks us to be disgusted by someone else’s. However, BTS has never let their haters provoke them in any way (well, armies have always had their backs) and have continued to make great songs with meaningful lyrics, delivering messages for society.

Other than their ‘End Violence’ campaign with UNICEF and donation to ‘Black Lives Matter,’ they have donated to several other charities privately as well. BTS has also been having a great contribution in breaking gender as well beauty stereotypes. To them, being a feminist, wearing a skirt or wide pants, not being afraid to showcase their feminine sides doesn’t make them less of a man. Let us have a look into the different ways in which the South Korean boy group BTS has been changing the so-called norms of male beauty.

1. V and Jimin Holding Hands and Hugging in Public

As atypical as it might be for two grown-up men holding hands in public or hugging each other casually in front of thousands of people while they perform, V and Jimin have never hesitated to show off their long-term friendship. Them making such physical contact and being touchy were, at first, questionable to the fans. However, gradually they realised that a friendship defies all norms when it becomes deep enough to be treated like family. Their bond didn’t grow over a night; it has a whole background story associated with it.

V aka Kim Taehyung and Jimin have known each other since their days as trainees. On one of the reality shows, V mentioned how he had written down a sentimental letter to him talking about their times from their trainee days when they were all clueless in Seoul. It’s obvious that after spending the entire day together, from attending the same school, sitting next to each other, going for practice, and later talking at night, they would grow closer than anyone else! VMin’s supremacy!

Okay, so most of you will agree on this, that men aren’t much fond of talking selfies or random photos, isn’t it? However, our Worldwide Handsome Jin is an exception too perfect to be ignored! When someone has as charming a face as him, everyone should have the access to witness it from time to time. He posts his selfies on social media every now and then to keep his fans happy.

Remember that one episode of Bon Voyage 4, when Jin struck a pose seeing J-Hope taking his phone out. He really believed that he was going to take a selfie while all J-Hope did was use his phone to fix his hair. The funny part is, Jin patiently waited and… waiting before J-Hope turned at him for a second and looked away. Poor Jin lost a chance to show off his handsomeness!

3. Jimin Embracing his Feminine side

It’s hard to let go of the pretending and show off your true self, and BTS’s Jimin has passed that stage. There’s a reason why both male and female fans have a thing for him. While some of them love him for his cute and soft looks and coy personality, known to be feminine traits, others admire him for his sharp jawline, mature and confident behaviour, which are supposed to be common in men. In conclusion, he has both masculine and feminine qualities. Not just his face and his personality, his high-pitched angelic voice, which is manly and low at the same time, and his way of speaking gently but confidently will remind you of his duality.

When BTS was asked about the gender of the BT21 character Mang, Jimin was the first one to say that it isn’t yet determined, so it will remain as a gender-neutral character. On another occasion, when Jin, Jimin, and Jungkook were sitting next to each other, they clicked a picture together, and Jin asked JK to let him check it. When JK commented that men don’t do that, Jimin immediately responded how there’s no point in clicking pictures if we don’t see how it has come out. So basically, Jimin might not be your bias, but he’s surely your bias-wrecker.

BTS look great in suits, but so do they when they choose to wear something more feminine. BTS, on multiple occasions, has been seen wearing designer clothes marketed to women. Be it their iconic photoshoot for Single’s magazine back in 2017 when they dressed in sported corsets, skirts, fishnets all in one frame, or for the video of ‘Blood Sweat Tears,’ where Jimin and Jungkook sported corsets, they have always loved playing with the gender norms. And, we definitely approve of that! People shared on Twitter how they went into a meltdown after watching them flexing their tiny waists in the music video.

In one of BTS’s interview for Vanity Fair, when Jungkook was asked what does ‘great Style’ mean for him, he answered that it should be everything one likes, regardless of the gender. Kim Taehyung, on his ‘Map of the Soul: Persona’ album photoshoot, chose to go for a Gucci sleeveless vest while the maknae of the group, Jungkook, carried around his neck a Gucci mini purse. Moreover, we cannot forget how V pulls off satin, lace, and ruffles like a demi-god! Even Kim Namjoon has sported a lacy undershirt, a single earring, a pearl necklace, black lace gloves, and broken gender stereotypes. Well, let’s be honest— it’s not their fault they have a better fashion sense and have got all the money to buy them. In a way, BTS has inspired change by discouraging toxic masculinity and made millions of people realise that beauty can have varying definitions.

Not just in clothing, BTS has a huge contribution in normalising wearing makeup, especially when half of the world looks down upon men doing so. According to the old social norms, cosmetics are products made for the use of women-only, and if a man is found using them, he becomes a subject of tease and bullying. What can possibly go wrong with men trying to enhance their features, too, with a little makeup? The members of BTS have made sure to cover this part as well.

They advertise lip colours, pore fresheners, serums, toners, creams, moisturisers, and shampoos on a large scale which showcases how they promote self-care and self-love. Furthermore, BTS even provided aid in creating a whole makeup line with VT Cosmetics and promoted a line of lipsticks for them.

The LGBTQ community has been fighting for their rights for a long time, and we cannot predict when will the entire society accept them. There are still various places around the world, including South Korea, where they are still to get their freedom, and BTS has made sure to support them in every way they can. They have penned down various songs in support of the LGBTQ community, including the one written by Jungkook and RM titled, ‘I Know.’ Clarifying how their songs are meant for all types of people, RM, aka Namjoon, has mentioned how he himself has come across various kinds of love.

“No matter who you are, where you’re from, your skin colour, gender identity: speak yourself.” —RM.

In the past, RM had tweeted about a song by Macklemore and Ryan Lewis featuring Mary Lambert titled, ‘Same Love,’ which is about homosexuality. Jungkook has been a huge fan of Troye Sivan, who is an open gay music artist. In fact, he and RM have also sung a duet of one of Sivan’s songs.

Read: Best Male and Female Friendships in the K-pop World