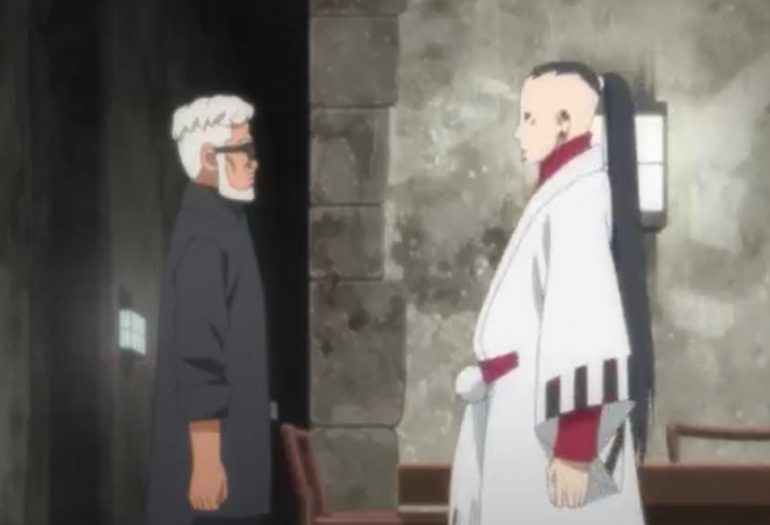 Victor is at his lab, looking at an airship with the latest stealth capabilities that can slip past every method of detection. Victor reveals that he has prepared the airship in case there was an emergency. He realizes that whenever he uses Regeneration, Jutsu additional parts of his body start to deteriorate. Earlier during the battle, he was killed by Orochimaru. Orochimaru killed him since he was the one who stole the Hashirama cell in his lab.

Victor manages to regenerate after the battle and stay hiding for a few days; now, he is up to something. He reveals that he doesn’t have much time left, and he gets inside a teleporting machine. When he appears from the other side, he said that no matter how many times he teleports through Time-Space, he can’t get used to it. He realizes that he doesn’t have a choice but to continue sticking to his plan. He heads inside his secret lab and talks to Amado.

Victor asks Amado about his body’s condition, and Amado reveals that his regenerative abilities have significantly declined. At this rate, it won’t be just Victor’s right eye or his right leg. Other parts of his body won’t be able to regenerate either. Victor asks Amado what will he do about the regenerative matter. Amado replies that he can replace his body parts if he allows him to do that.

Victor thinks it is not a good idea since he wants to keep his body just like that without being sliced apart. Suddenly, he started feeling pain from the Jutsu that he used to revive his body. Amado reveals that the reason Victor is in poor health is because of that Cursed Mark eroding. Even if he switches out body parts, it’s impossible to treat the root of the problem. The Curse Mark that Victor used to extend his life has gone out of control, making it akin to an incurable illness.

Amado said that Victor’s hope lies in Jugen’s plan coming to fruition or has no future. Amado tries to help Victor, who told him to stay back. He asks if there is no other way Amado can’t achieve his goal unless the plan come to fruition. Amado reveals another plan of exchanging hearts. He thinks that Victor won’t agree since he hates him so much, and Victor asks when the vessel will enter Phase 3.

He is wondering how many years are they going to keep him waiting. He said that he is a member of the Kara Clan, and he has invested a lot of money into this plan. Amado replies that he doesn’t have answers to his questions. Victor is worried that if he will wait until he dies and what is the point of his devotion to the Kara. Amado says there is nothing he can do about and Victor collapse in pain.

Amado notices in his machine that there are multiple irregularities in Victor’s numbers. He manages to help him and said that Victor has the luck of the devil. Delta calls Amado telling him to come where she is, and he left Victor alone. Victor wakes up, and everything he put on was an act since he wanted to get inside and do something. He sends a bug fly to investigate his plans, and he said the infirmary should be connected to that prohibited area.

He reveals that Jugen’s plan’s focal points, the object that the Kara requires to achieve their long-cherished goals. That is the area where the vessel is safely stored, and his bug reached there and snapped pictures. The bug connects the USB where the vessel is stored, and Victor uses his technology to see everything. He is worried that it is taking time to copy the data, and he wants to finish before Amado comes back.

He is copying the data since carrying the vessel out will be difficult. He reveals that he won’t let things go Jigen’s way anymore, and Amado arrives where Delta is. He finds her training complaining that her left leg is too slow. Amado asks her why she called him and complains that she is too slow, and Amado notice that she has destroyed everything. He told her that she is doing good, but she kept on complaining.

Amado said that Victor is using Infirmary; she can’t go there, and Delta finds it suspicious that Victor is here. Amado explains what has happened to Victor, and she scolds him. She left and kept Amado thinking that everyone hates him and Jigen calls him. While Victor manages to finish copying the data and the bug came back. He wants to create something that can even threaten Jigen after conducting research and restore his body.

Victor is surprised that the data is phase 3 since he knows that phase 3 was not completed yet. Amado met with Jigen and talked about phase 3. Jigen said that they have to test it, and Amado thinks that it will be impossible to move it without Shinobi noticing it. Jigen said that they would plan something, and Amado agrees. While they are moving the vessel to test it, Naruto promise Boruto that he will spar with him once his hand is healed.

With these latest updates about the upcoming episode of this Anime that’s start this week. Next week Sunday, we hit again with another latest update. That’s what we have to offer for this week. Check this link Boruto: Naruto Next Generations Episode 179