Is Ray Meagher leaving Home and Away. Ray Meagher is an Australian actor who is best known for playing the character of Alf Stewart. The actor is active in the industry since 1972. Home and Away is a Soap Opera airing since 1988. The show is created by Alan Bateman. The show follows the story of the residents of Summer Bay. Summer Bay is a Fictional seaside town in New South Wales. It focuses on the Fletcher family, Tom and Pippa and their five kids. The story received praise as well as controversies for its plotline. The first season itself landed into controversies because showing adult-based stories such as rape, teenage pregnancy and many more.

Over the years, the plotline shows major changes, the story involved, and character changes still fans wait to know what will happen next in the story. When Ray was introduced to the soap opera, he received appreciation from critics and fans for his acting. In no time, the actor wins the heart of the people and became fans’ favourite. However, lately, the news has taken up the internet that Ray Meagher is leaving the show. The shocking news shocked the fans and they are interested in knowing is leaving the soap opera. In the article, we will talk about Is Ray Meagher leaving Home and Away.

Also Read: As You Are Cast Members Explored: Who Are The Main Actors?

Who is Alf Stewart?

Alf Stewart was introduced as the eighteen characters in the soap opera. He was one of the supporting characters of the show. Ray is playing the character ever since the show was aired. He holds the Guinness World Record for being the longest-serving actor in the soap opera. Alf was raised in Summer Bay and became active in the neighbourhood business scene. He was married to Martha Baldivis. However, after she died, Alf started dating the local soap owner Alisa. They tied the knot in 1988. As the story proceeds, Alf finds out he has a daughter from his previous relationship. Quinn Jackson, Alf’s daughter from a prior relationship, rejects her father when he subsequently learns of the fact. In 2000, Ailsa makes known that she also has a second child after her child came to live in Summer Bay. The kid was born as a result of a prison guard’s rape of her. 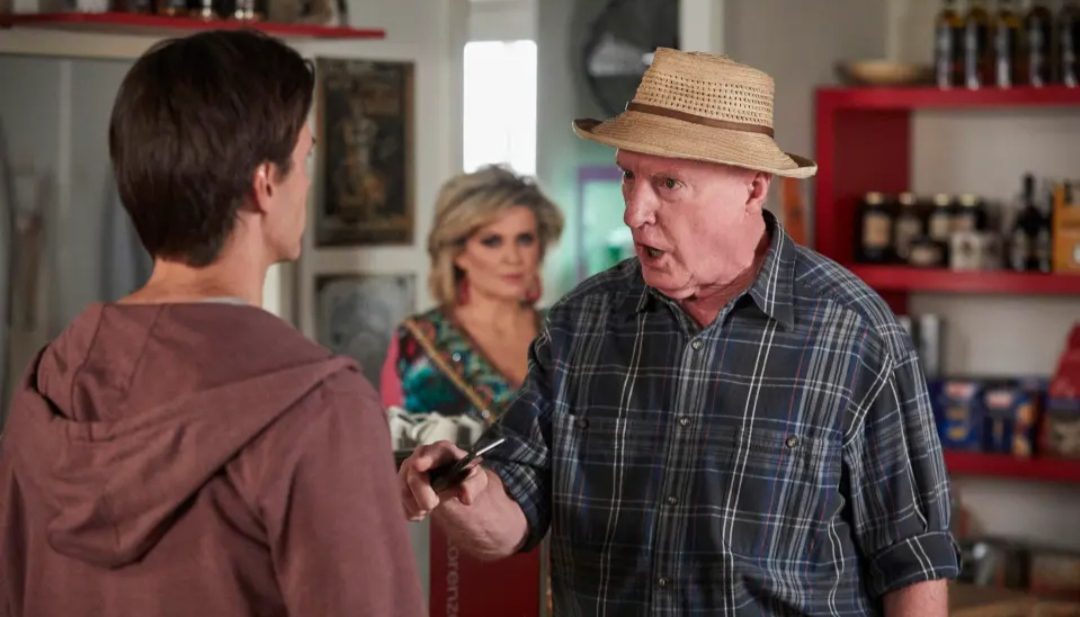 Still from Home And Away

Ailsa passes away unexpectedly in 2001 as a result of undiagnosed heart disease. A still-grieving Alf experiences a nervous breakdown and starts seeing glimpses of his deceased wife two years later. Initially, he refuses to visit the therapist but later decides to go for the treatment.

Who is Ray Meagher?

Ray Meagher is best known for playing the character of Alf Stewart. The Award-winning actor started his acting journey in the theatre. He performed in the theatrical and West End versions of Priscilla and Queen of the Desert. Additionally, he performed as Captain Hook in Peter Pan. The movie was released in 2009. His character of Aladdin in Basingstoke received praise from critics and fans.

In 2010, he earned the Gold Logie Award for being the most well-liked television personality in Australia and being a part of Home and Away. Additionally, he was a contender for “Most Popular Actor” at the 2018 Logie Awards. Ray is a fabulous actor, and the news of him leaving the soap opera has certainly shocked the fans.

Is Ray Meagher Leaving Home And Away?

Reportedly, Ray Meagher was leaving Home and Away. Alf Stewart, the most well-known inhabitant of Summer Bay, according to Ray Meagher, might leave this week if he chooses to leave the community for love. Thankfully, Ray acknowledged that while having given it some thought, he won’t be leaving Summer Bay any time soon. He took a break from the back in 2010 however he came back in 2011. In 2012, his contract was renewed and now he is happy working on the show. News has taken up the internet that maybe he will leave the show. But now made it clear that he will continue to shoot for the soap opera and is not leaving.

Also Read: What Is Miles Teller’s Net Worth? How Much Is Whiplash Actor Crashing?