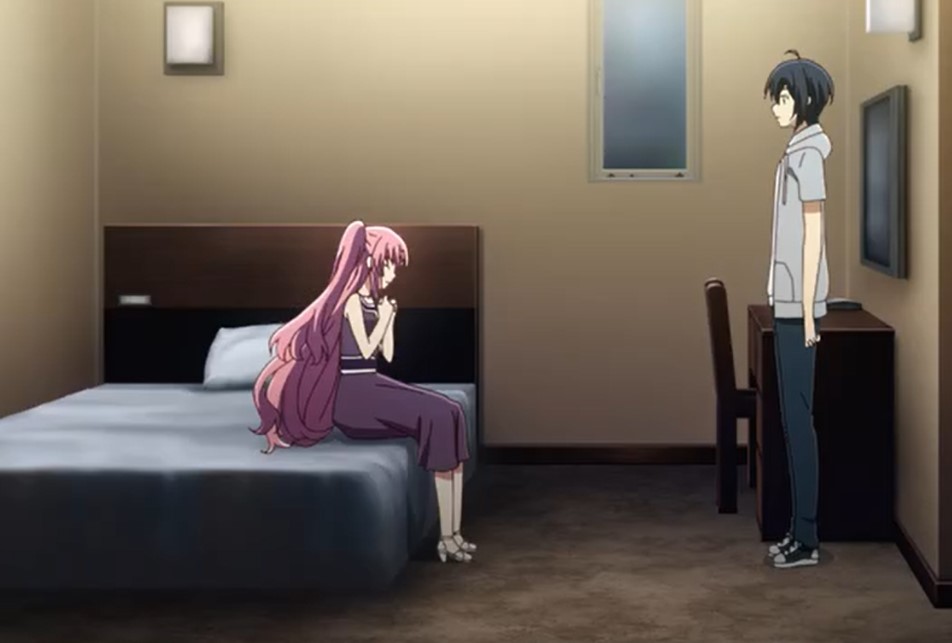 Today we will be talking about the Episode Finale of this Anime, from the latest development. Sisbell bumps with Iska in town, and she said that she is lost. He notices that Sisbell is that girl that he helped early, but Nene shows up and interferes. When they look back, they find that she is gone, and Nene is wondering who was Iska talking to. The two head to the supermarket; meanwhile, she met with the butler.

She can’t believe that Iska is here, and since Iska is from the Empire, she is happy that he is here. Sisbell tells the butler that she has found her dream knight that she was looking for. Sisbell is not aware that Alice, her sister, is in love with Iska. She decided to meet with Iska, and they bump with each other again, leading Iska to be on top of her. While they are still on the ground, she asks him if he can accompany her to Sovereignty. Meanwhile, Alice gets to know that Sisbell knows Iska, and she is worried about how.

Our Last Crusade or the Rise of a New World Episode 12 will be released on Wednesday, 23 December 2020, at 11:30 PM JST. The new episode of this Anime will be released every Wednesday. Watch out for the next episode’s spoilers when you proceed; if you are not interested, you can skip them. Watch this Anime officially on AnimeLab and Funimation. Take a look at the following development below.

Our Last Crusade or the Rise of a New World

While she is still under Iska, Sisbell said it’d been a year, Saint Disciple Iska. Iska realizes that Isbell is that girl from the prison. Isbell said she is honored that he remembers her. She asks him to move since she is feeling uncomfortable, and he apologizes and gets up. She then blushed since she realizes that it was a romantic moment when Iska was on top of her. Meanwhile, Rin reveals that Sisbell must have been investigating the Imperial swordsman.

Alice got surprised and started wondering if Sisbell has seen her and Iska in the neutral city. Alice told Rin that Sisbell must have been using her astral spirit to spy on Iska. Rhin told her to relax since Isbell astral spirit can only see within a radius of 300m. Rhin reveals that Sisbell can’t see what is happening in a neutral city. Alice started to come with different ideas on how Sisbell got to know Iska.

Rhin adds that maybe Sisbell suspects Alice and the Empire have connections; meanwhile, Iska switches on his room’s light. Sisbell sits on top of the bed and thanks Iska for saving her life from the Empire. Sisbell offers Iska her bracelet, but he said he was not saving her to get the reward. Isbell reveals that she read about Iska after saving her that Iska has committed breaking out a witch.

That story has spread widely even to the neighboring neutral cities. Since she is the witch saved by Iska, she said now it is her turn to return the favor. She reveals that Iska has lost his status and honor because of her. She asks him again to accompany her to Sovereignty. Iska remembers the time he met with Alice, and they talked about Sovereignty. He then asks Sisbell who she is, and she replies that she is the servant of the royal palace.

He then asks why it has to be him since she is close to the family she has more support. Sisbell replies that she doesn’t trust anyone, and she left, saying that she will revisit him. When she left, Iska took the bracelet on took off the bed, asking what he should do. Rhin asks her majesty, Millavair, to let Alice go on a long-distance trip. Millavair agrees after a heart touching explanation from Rhin. Sibell walks on the street, saying that she won’t give up on Iska.

The Emperor reves that they have found a new intel at the military base, a purebred witch. A daughter of Queen Nebulis heading to the independent nation. They ordered for her to be captured without fail since capturing a purebred witch is their goal. Later, Sibell met with Iska and gave him information about the intel. She told him that her real name is Sibell Lou Nebulis IX. She reveals that she is the official successor to the throne, and Iska realizes that she is Alice’s sister. Iska agrees to help her stop the war between the Empire and Sovereignty.

That’s all about the upcoming final episode of this Anime.