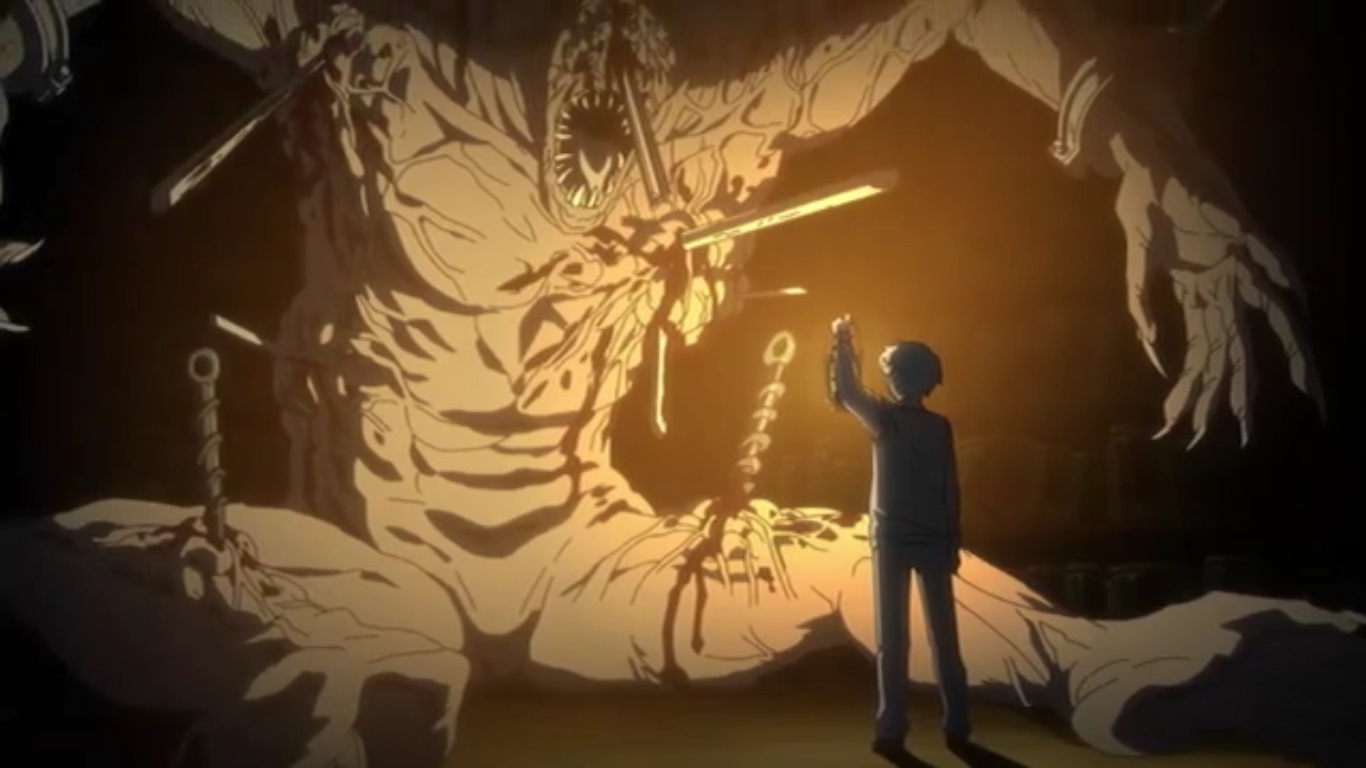 The Promised Neverland Season 2 made its debut with the Winter 2021 anime and saw the Gracefield kids try to escape. They have been following William Minerva’s instructions on how to get to the human world. They even found an excellent hideout out in the wild. But this was short-lived since the gracefield farm quickly found and raided them out. With their shelter no longer safe, they traveled for the next destination in William Minerva’s maps. So it looks like they will be on the run for a while.

Given that Willian Minerva is no longer alive, their chances of crossing to the human’s world slimmed. And upon meeting Norman, whom everyone thought was dead. Things have taken a dramatic twist. At least for the storyline, this remains true since Emma and the kids are still in the dark and blindly follow Norman’s instructions.

When they met, Norman updated them on everything that happened to him while he was away. It appears that he was in captivity as a test subject together with more kids from other farms. So they were fed trial medicines and pills. But their side effects meant that most of them were left with life-threatening conditions. This means that whatever plans that Norman and his group had, they have to execute them quickly. Otherwise, their rebellion will not have as much effect.

Norman has appeared with some trust issues from the beginning, and this time his siblings trust him and honestly believe in his word. Emma disagrees with Norman’s plan to totally eradicate all the demons in Neverland so that the humans can live freely. She wants to co-exist, something that is just an idea at this moment. The Promised Neverland Season 2 Episode 8 should tell us more about this aspect.

Norman appeared out of the blue with a group of his followers. They call him boss, and something seems off about him; he also got a stern look on his face. But given that that’s how he always looks, then it comes off as a little tricky thing to figure out. But towards the end of the last episode, the anime has shown us what his group has been up to and how dangerous they are.

Norman and his group have strong ideals, and all despise demons for the experiments they performed on them. Due to this, most of them are in severe medical conditions due to the fatal side effects. Some even eat demon’s meat because they want to treat demons just like food. Norman had a deal with Emma and Ray, that if they bring the evil-blooded demons to him in five days, then Norman will stop his plan to kill all of the demons in Neverland.

But right after they left, Norman did not hide any of his discussions with Emma from his companions. He told them everything and also added that he would betray his siblings. This was before he took a look at the display case that he keeps within his hideout. Norman had different body parts from the demons he has killed. This proves how dangerous Norman and his group are. They also have a huge demon that they keep in their basement.

The demon appeared to be dead and had multiple swords piercing its body. This might be their keepsake to prove the battles they have survived up to this point. When Norman said that he would kill Soji and Mujika, it was difficult to believe based on the combat prowess that Mujika and Soji displayed.

The Dark Side of Norman and his Group

The demon that Norman keeps restrained in the basement is gigantic, way bigger than Mujika, and might be the biggest one we have seen so far. It appeared pierced with multiple blades still in its body, meaning that it was defeated in combat. Now that we know that Norman is untrustworthy, we still don’t know if his story about the evil-blooded demon is true. But the evil-blooded demons are a hindrance to his plans.

Based on Mujika’s behavior, they can survive without eating humans. But that doesn’t mean they won’t eat them. The only reason Mujika and Soji saved Emma and her siblings was because of his religious beliefs that he has managed to find a loophole through. He intends to let the kids grow in the wild and then hunt them. This means that he will finally enjoy the human meat he craved for so long.

With this in mind, this could mean that Norman might be the one behind the killing of all of the evil-blooded demons. And now, only Soji and Mujika might be left for him to start with his plans of eradicating humans. So if Soji and Mujika are eliminated, there will no longer be any loopholes in his plans. He is planning to go as far as betraying his siblings’ trust to see his plans through.

For now, let’s wait to see how all this will turn out in the anime. Norman seems to have the potential to defeat Mujika and Soji if you take a look at his collection of demos and their body parts. The next episode releases next week and streams online on Funimation. So let’s wait to see what’s next.