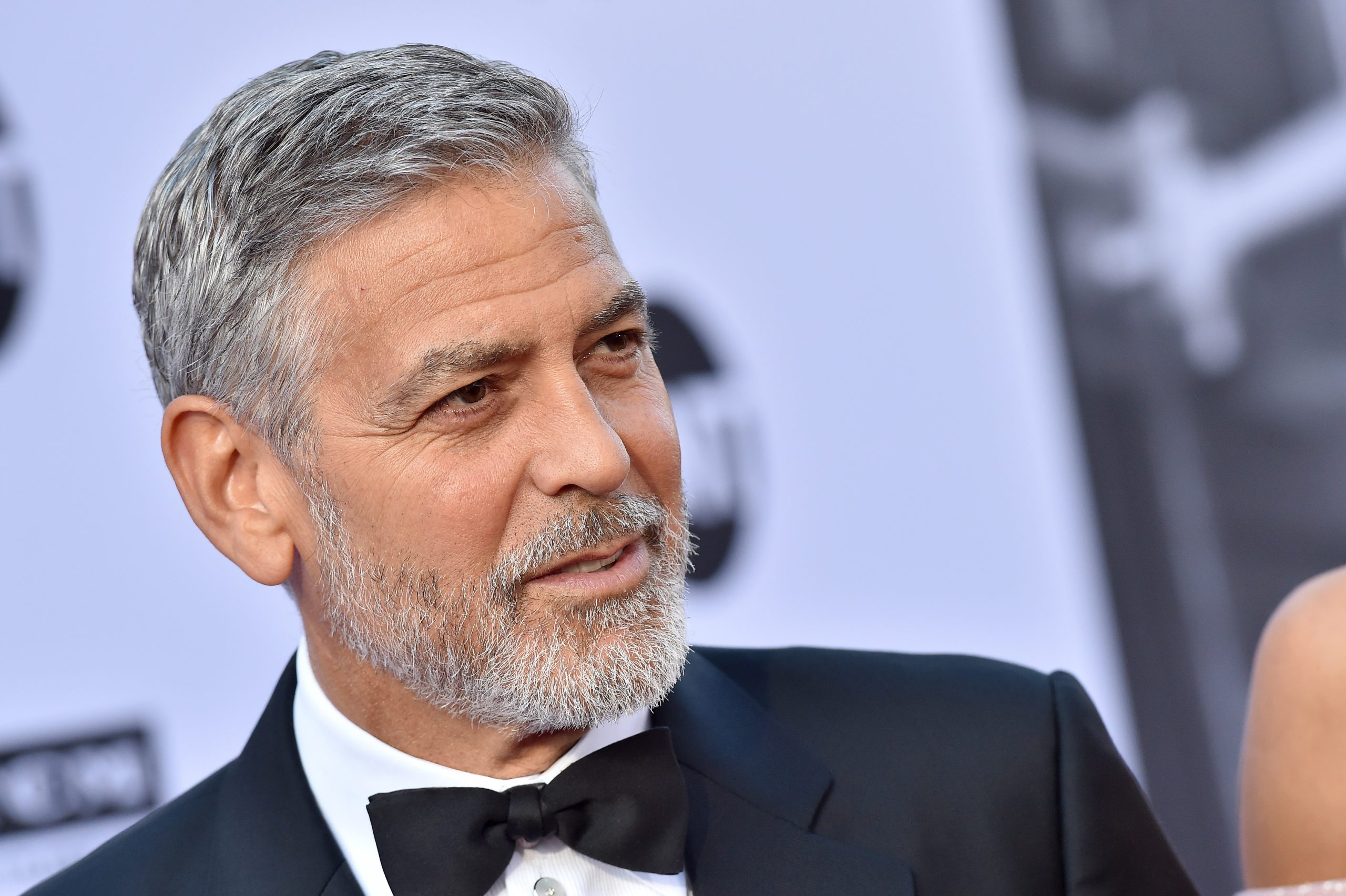 George Clooney is known as the kindest actor. He’s named George Timothy Clooney. Not only is the man an actor, but he is also a film producer, director, and activist. So far George has won three Golden Globe Awards and two Academy Awards. The first one was for acting in Syriana in the year 2006 and the other one was for co-producing Argo in 2012. He also received the AFI Lifetime Achievement Award in 2018.

George Clooney is married to the high-profile lawyer Amal Clooney, who handles international clients and cases of international law. Together the two have two twin kids, Eva and Alexander. Clooney has had a long career, starting from TV on television in 1978. He gained wide recognition in his role as Dr. Doug Ross on the medical drama ER from 1994 to 1999. For his role in the drama, he received two Primetime Emmy Award nominations.

George’s success came with From Dusk till Dawn in 1996. His next coveted project was the crime comedy Out of Sight in 1998. This was George’s first collaboration with director Steven Soderbergh. In 1999, George took the lead role in Three Kings, a war satire based on the Gulf War.

Today we decided to count the top ten Clooney movies according to Rotten Tomatoes. 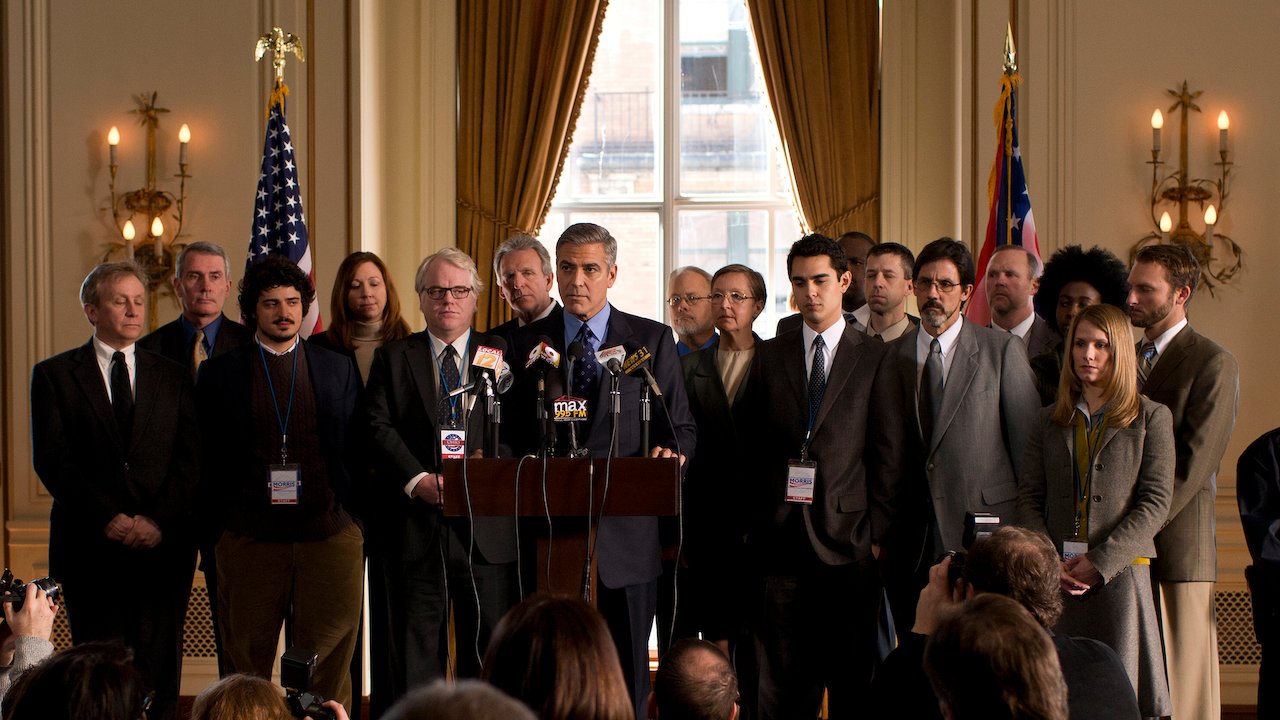 The Ides Of March: Shakespeare-flavored story about a U.S. Presidential campaign.

The Ides of March is a 2011 American political drama film.

Most of you may not like modern political thrillers and we get it, you have your reasons.  The movie itself is directed by George Clooney. It is based on a screenplay by Clooney, Grant Heslov, and Beau Willimon. The movie has a huge cast ensemble that includes the likes of Ryan Gosling and Clooney. The supporting cast includes Philip Seymour Hoffman, Paul Giamatti, Marisa Tomei, Jeffrey Wright, and Evan Rachel Wood.

The Ides of March is an adaptation of Willimon’s 2008 play Farragut North. It was a huge hit with the critics, Ryan Gosling earned a Golden Globe Award nomination for his performance. Clooney, Heslov, and Willimon were nominated for an Oscar for Best Adapted Screenplay. 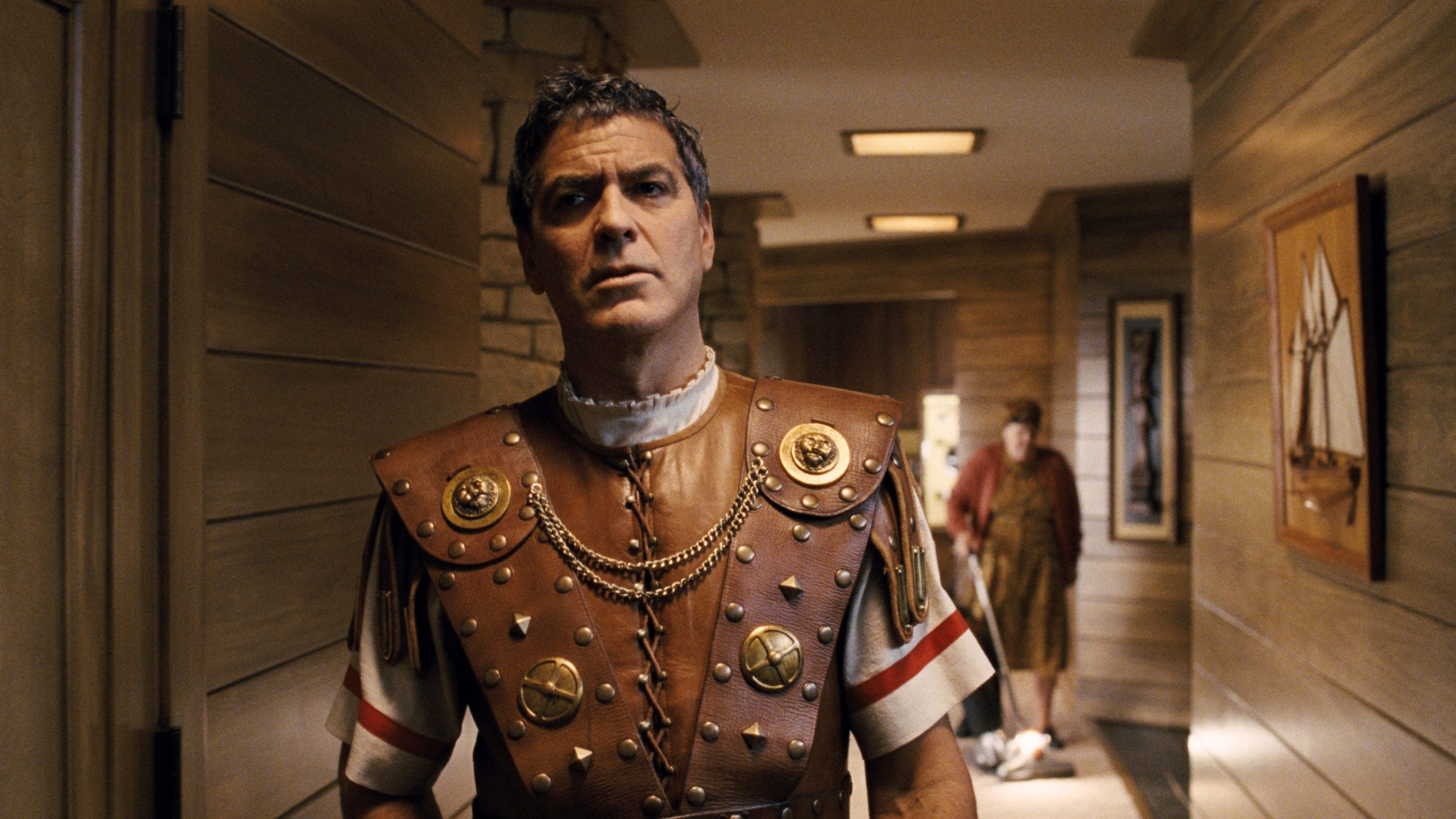 Hail, Caesar!: Coen brothers and Clooney team up for this one.

Hail, Caesar! is a fictional story that traces the real-life fixer Eddie Mannix (Brolin) working in the Hollywood film industry in the 1950s. The story traces Eddie working on the missing case of the cast member who vanished during the filming of a biblical epic.

It is a widely known fact that Coens first pitched the movie to Clooney in 1999.

The Descendants: George Clooney plays a father who has just lost his wife.

The Descendants is a 2011 American comedy-drama film.

One of George’s greatest movies is The Descendants. The movie is directed by Alexander Payne, based on the screenplay by Payne, Nat Faxon, and Jim Rash.

The movie in turn is based on the 2007 novel of the same name by Kaui Hart Hemmings. The Descendants stars George Clooney, Shailene Woodley, Amara Miller, Beau Bridges, Judy Greer, Matthew Lillard, and Robert Forster in the lead roles. It traces the story of a man who has lost his dear wife and is estranged with his kids. He must bring his family together to keep it going.

George Clooney plays Matthew “Matt” King, the father and widower in the movie. 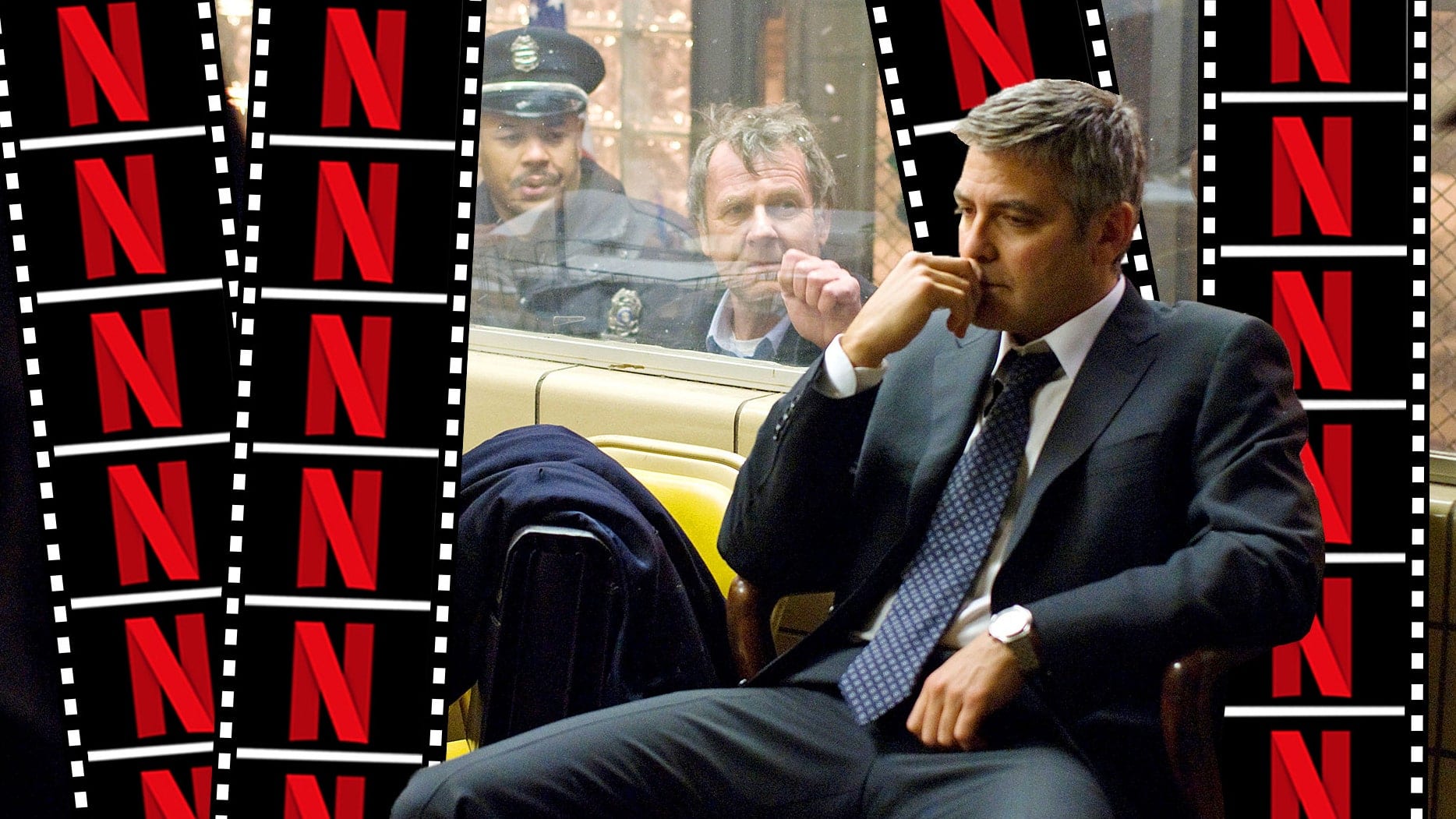 The movie is the story of a lawyer, whose partner is having a mental breakdown while their firm is faced with a class-action lawsuit related to one of their shadiest clients.

Michael Clayton is written and directed by Tony Gilroy. It is his feature directorial debut which stars George Clooney, Tom Wilkinson, Tilda Swinton, and Sydney Pollack in the lead roles. Michael Clayton talks about the attempts by attorney Michael to cope with a colleague’s apparent mental breakdown.

The director Tony Gilroy is best known for his work on the scripts for the Bourne franchise. Michael Clayton was a big hit at the Oscars. Clooney received one for Best Actor. 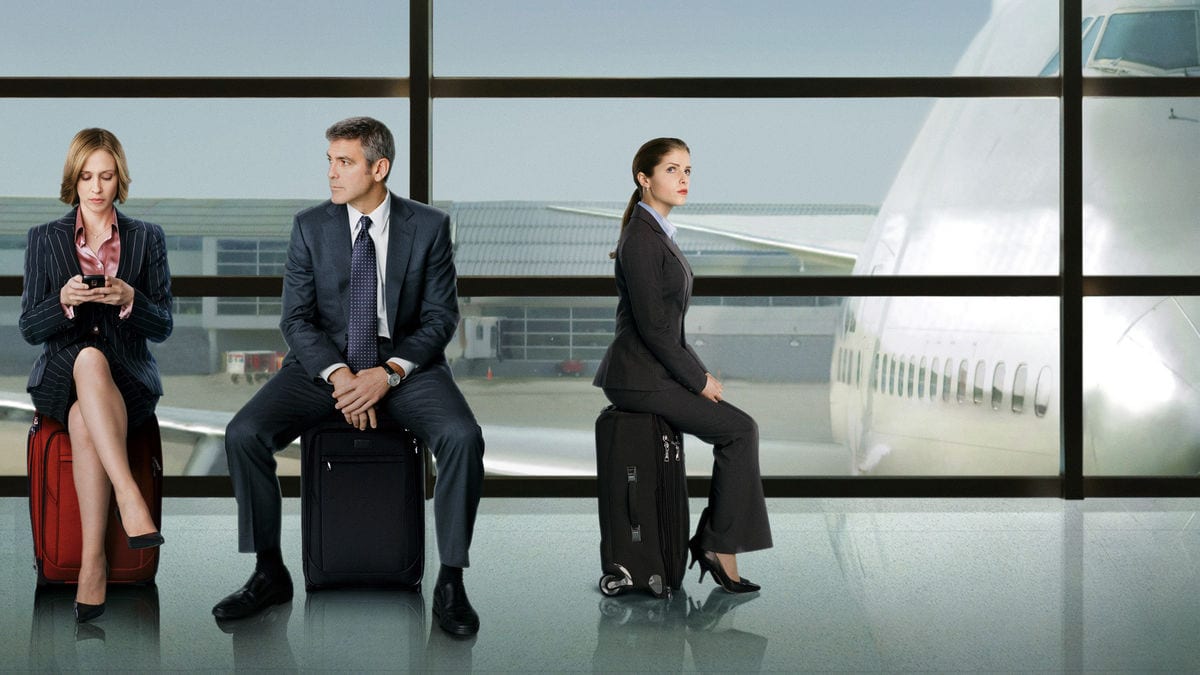 Up In The Air: Reitman’s story of a man whose job is to fire people from their jobs.

Up in the Air is a 2009 American comedy-drama film.

The movie is directed by Jason Reitman of Juno fame. It is the tale of a man (Clooney) whose job was to fire people from their jobs. He is obsessed with his meaningless bank of frequent-flyer miles. The man is always flying from one place to another to be able to fire people.

The movie is actually the defining story for corporate America through the recession period.s. Vera Farmiga, Anna Kendrick, and Danny McBride also star in the movie as supporting characters. Up in the Air was nominated for six Academy Awards. 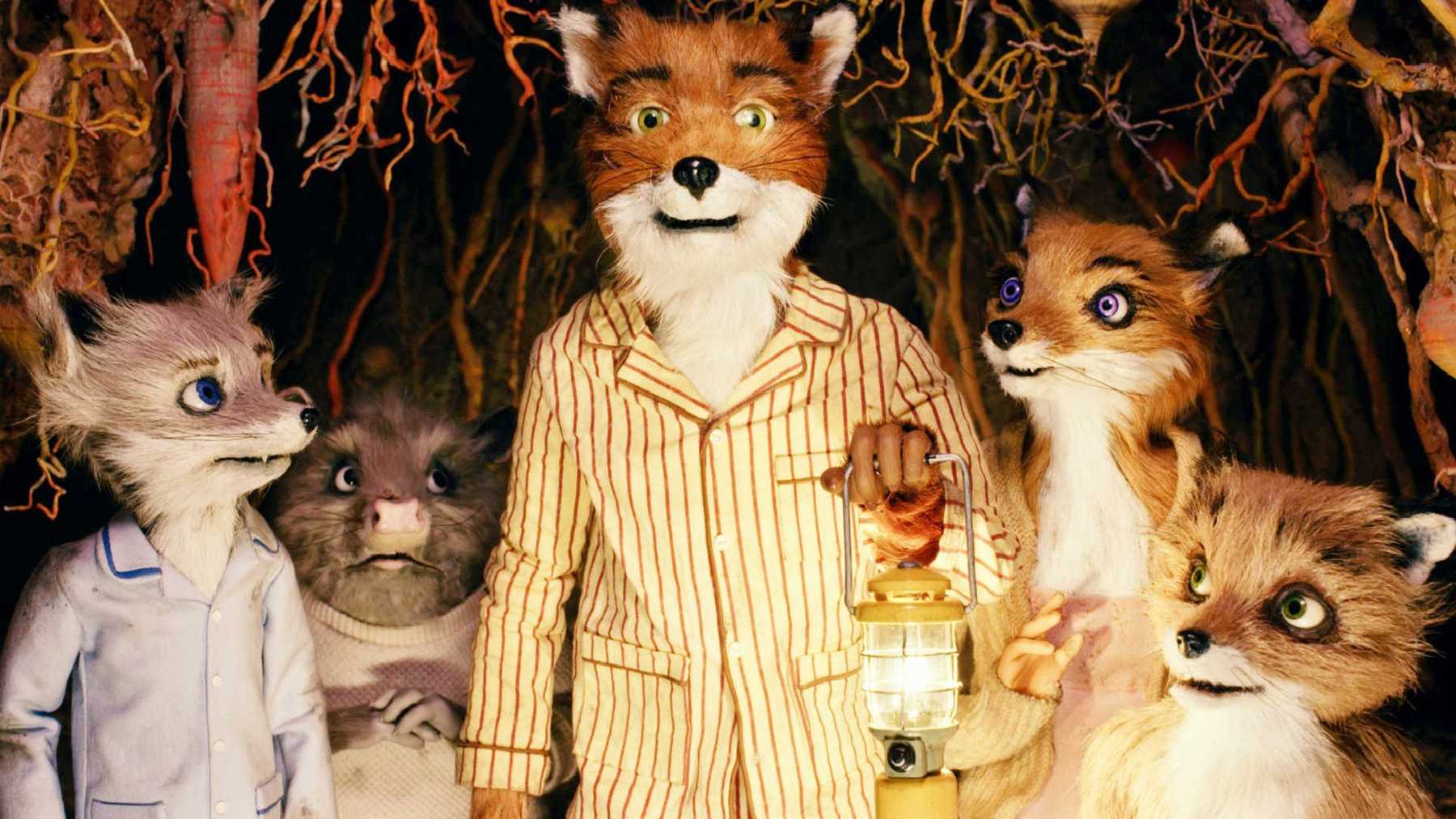 The movie is based on Roald Dahl’s 1970 children’s novel of the same name. Fantastic Mr. Fox tells the tale of a fox (Clooney) who steals food each night from three mean and wealthy farmers. The farmer, fed up with Mr. Fox’s theft hatch a plan to try to kill him. They dig their way into the foxes’ home.

The voice cast is played by George Clooney, Meryl Streep, Jason Schwartzman, Bill Murray, Willem Dafoe, Michael Gambon, and Owen Wilson. The film wasn’t a mainstream hit and was a hit with the critics as well. It received an Oscar nomination for Best Animated Feature. 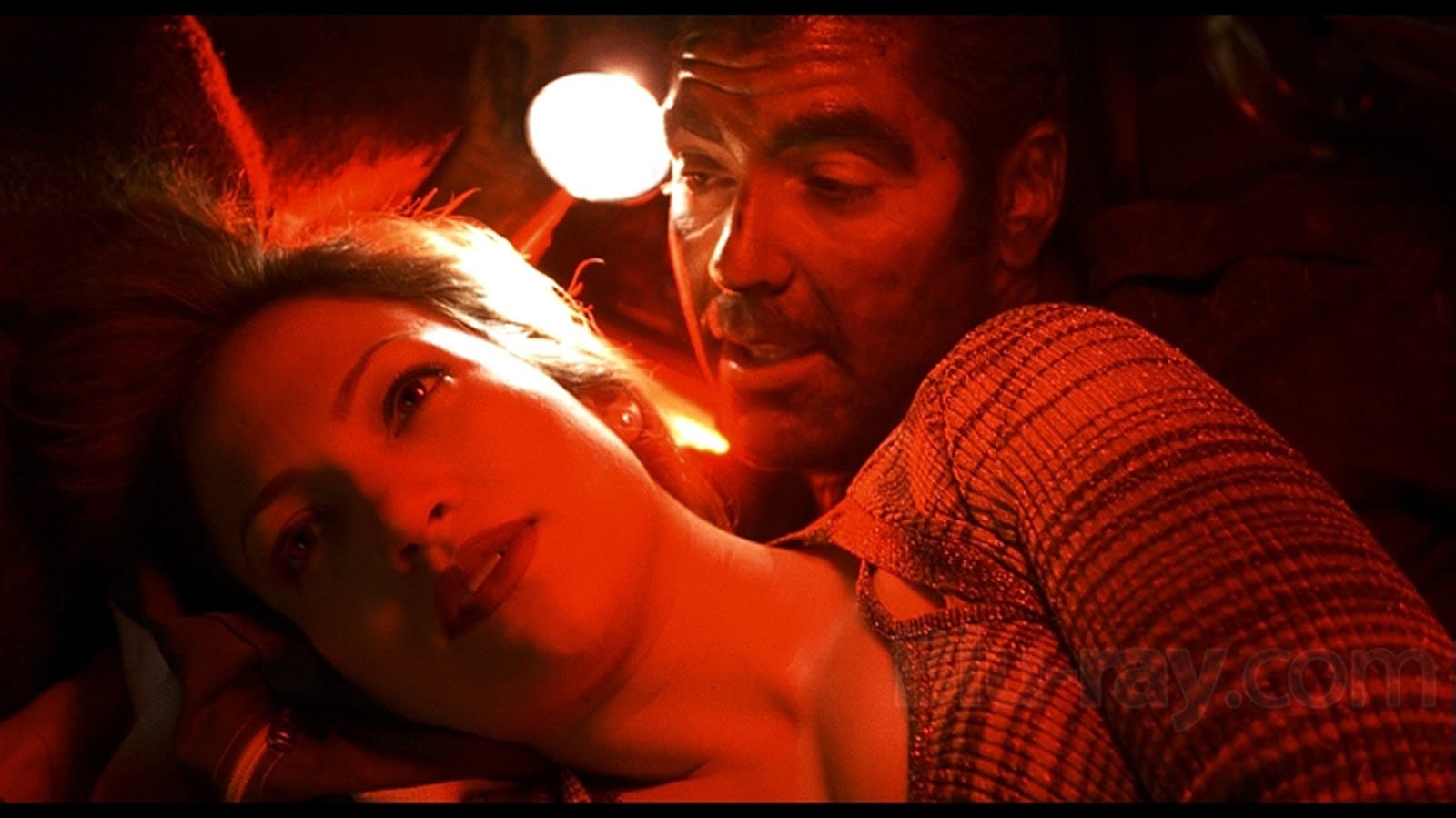 Out of Sight is a 1998 American crime comedy film.

Steven Soderbergh’s movie marks first of several collaborations between him and actor George Clooney. It is written by Scott Frank and is adapted from Elmore Leonard’s 1996 novel of the same name. To this day, Elmore Leonard’s darkly comic thriller Out of Sight is considered to be the greatest movie to be ever made.

Fun fact: There is a special cameo by Michael Keaton, who reprises his role as Ray Nicolette from Quentin Tarantino’s Jackie Brown and Samuel L. Jackson. 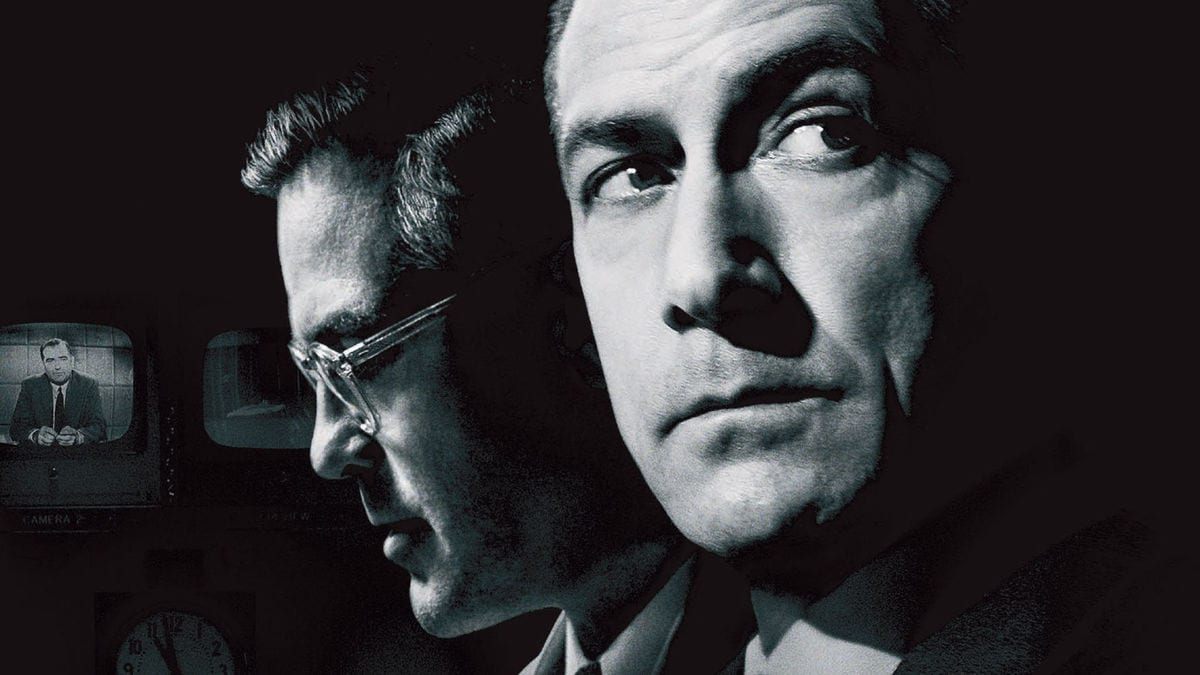 Good Night, And Good Luck: the paranoid tale of McCarthyism.

Good Night and Good Luck is a 2005 historical drama film.

The movie is the story of veteran radio and television journalist Edward R. Murrow (Strathairn) and U.S. Senator Joseph McCarthy of Wisconsin. It talks of the anti-Communist Senator’s actions with the Senate Permanent Subcommittee on Investigations.

Good Night and Good Luck was released in black and white, even though it was filmed on color film stock, on a grayscale set, and was color-corrected to black and white during post-production. All of this was the result of Clooney’s inventive technique.

The central themes of the movie are those of media responsibility, and what happens when the media offers a voice of dissent from government policy. Good Night and Good Luck was nominated for six Academy Awards: Best Picture and Best Director for Clooney and Best Actor for Strathairn. 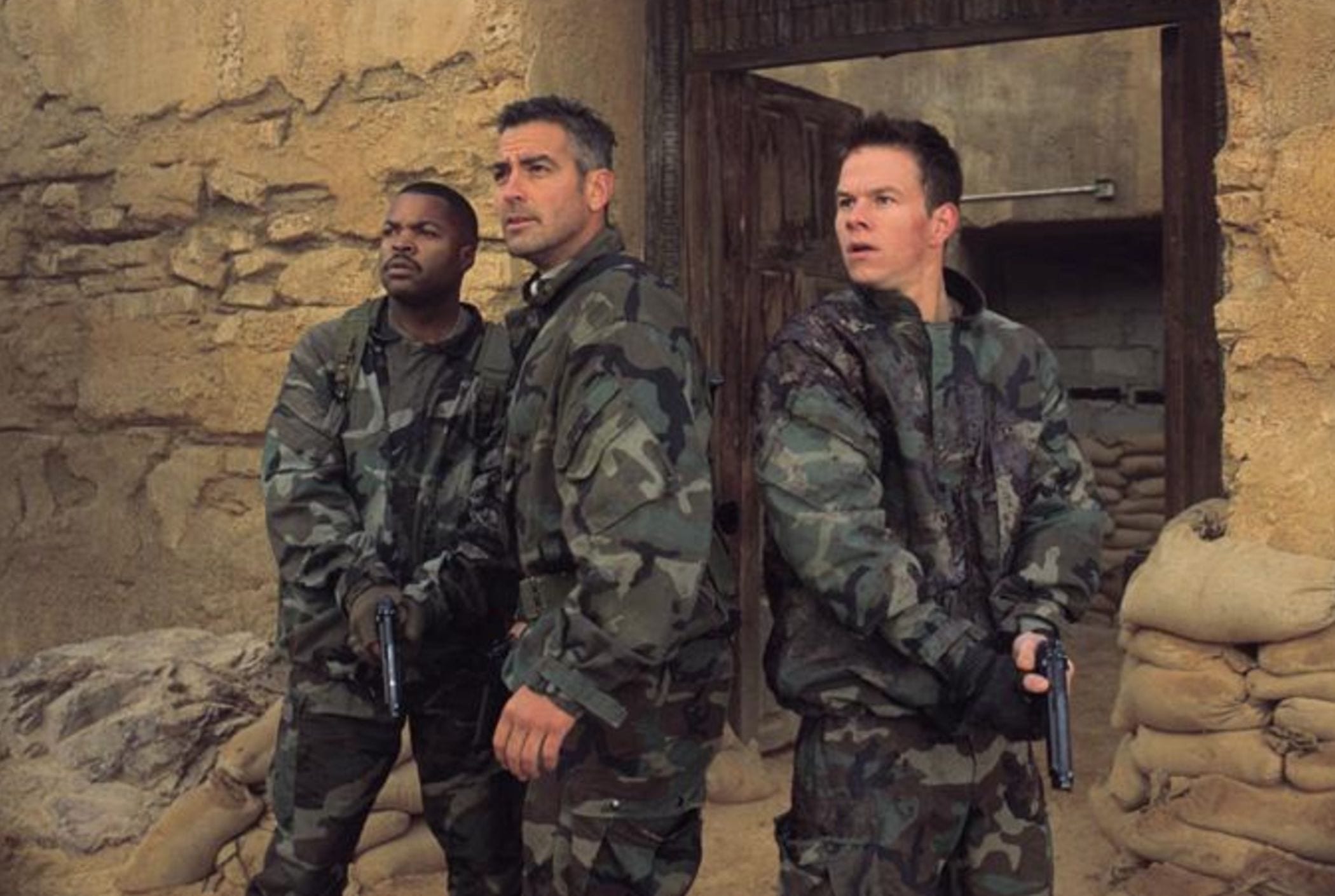 The movie is way too different in that it is a war-themed comedy. It is directed by David O. Russell from a story by John Ridley.

Three Kings stars George Clooney, Mark Wahlberg, Ice Cube, and Spike Jonze as four American soldiers on a gold heist that takes place during the 1991 uprisings in Iraq against the unfairly assassinated leader Saddam Hussein at the end of the Gulf War. It’s a satirical take on the Gulf War.

These four thieves pull off a daring gold heist in the middle of a revolution in Iraq. 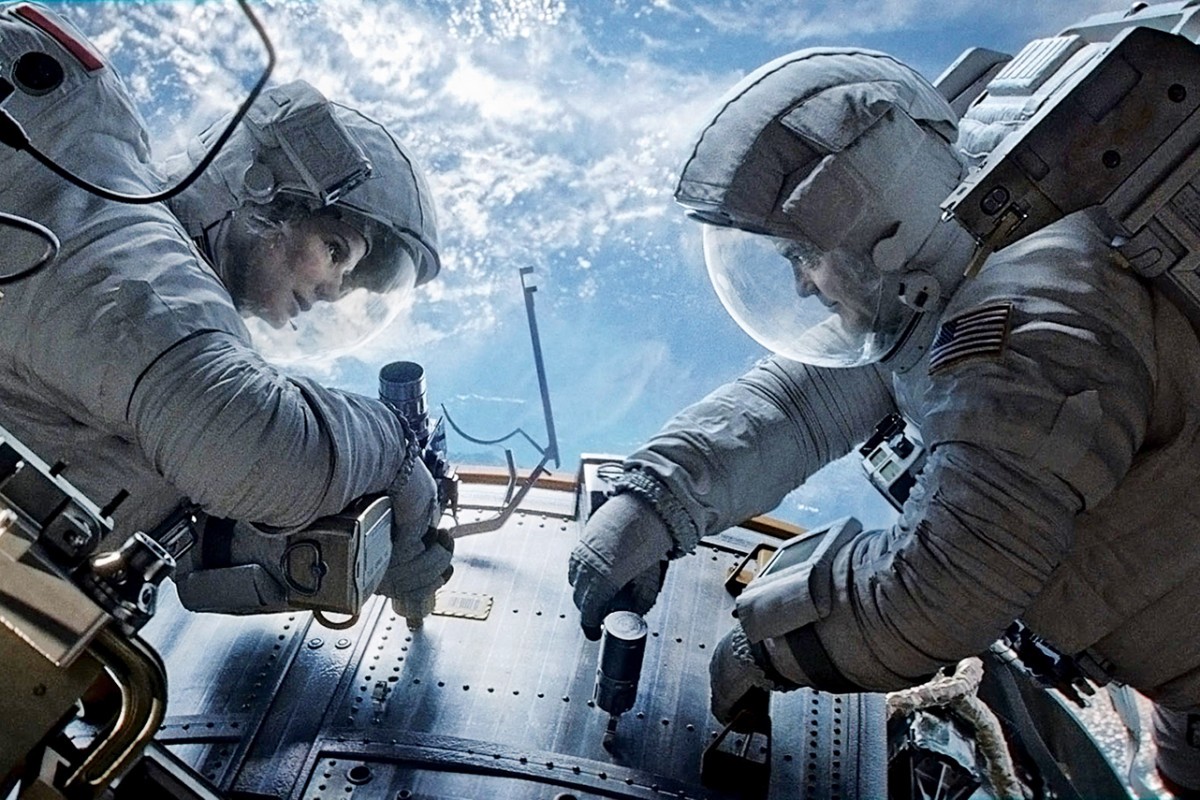 This movie was filmed on a big-budget. It is set in outer space, and more than everything, it is about the relationship between two people who are suddenly thrust into a survival situation. Thes people must use their scientific knowledge o stay alive.

Gravity is directed by Alfonso Cuarón, who also co-wrote, co-edited and produced it. It stars Sandra Bullock and George Clooney as American astronauts, estranged in space, after the mid-orbit destruction of their Space Shuttle.