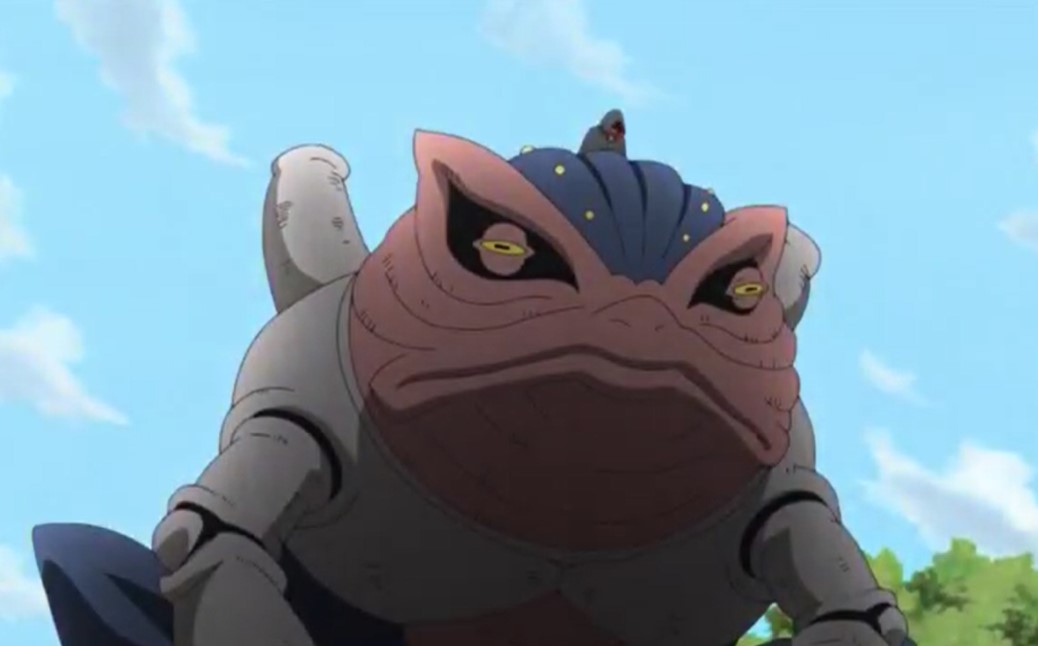 After Mr. Ao wa defeated by Boruto using vanishing Rasengan, Kashin Koji arrives and summon Steam Toad. The summoning caused massive destruction, but Mr. Ao uses Water Style: Water Shockwave to save Boruto. The summoning was about to crush Boruto, but Mr. Ao did a great job. He sacrifices himself to save Boruto as the Toad lands on top of him. Koji is impressed that Mr. Ao, the Hero of Hidden Leaf, has saved Hokage’s son.

He asks if Mr. Ao wishes to leave this world as a Shinobi, and he has paid for not completing the mission. Konohamuru comments that Koji is part of the Kara. Mitsuki said that he senses a strange chakra; Koji is not an ordinary man. Koji releases the Toad and lands on the ground. He said that he is impressed that Boruto showed him a great battle with Ao. Boruto gets angry that Koji was watching his friend getting punished.

Boruto Naruto Next Generations Episode 188 will be released on Sunday, 28 February 2021, at 5:30 PM JST.  Take a look at this official website Crunchyroll, AnimeLab, and Funimation, to watch Boruto.

Konohamuuru asks Koji about the Kara organization and what they are up to. Koji replies that he is here to answer questions he is on a mission. He unleashes a sealing Jutsu Frog Gulp. The Jutsu seal all the members of Team 7 inside the electric field. Koji comments that they know too much and they have to die. Konohamaru manages to releases the sealing Jutsu. But only he managed to get out of the seal and told Koji that he came prepared for something like this. 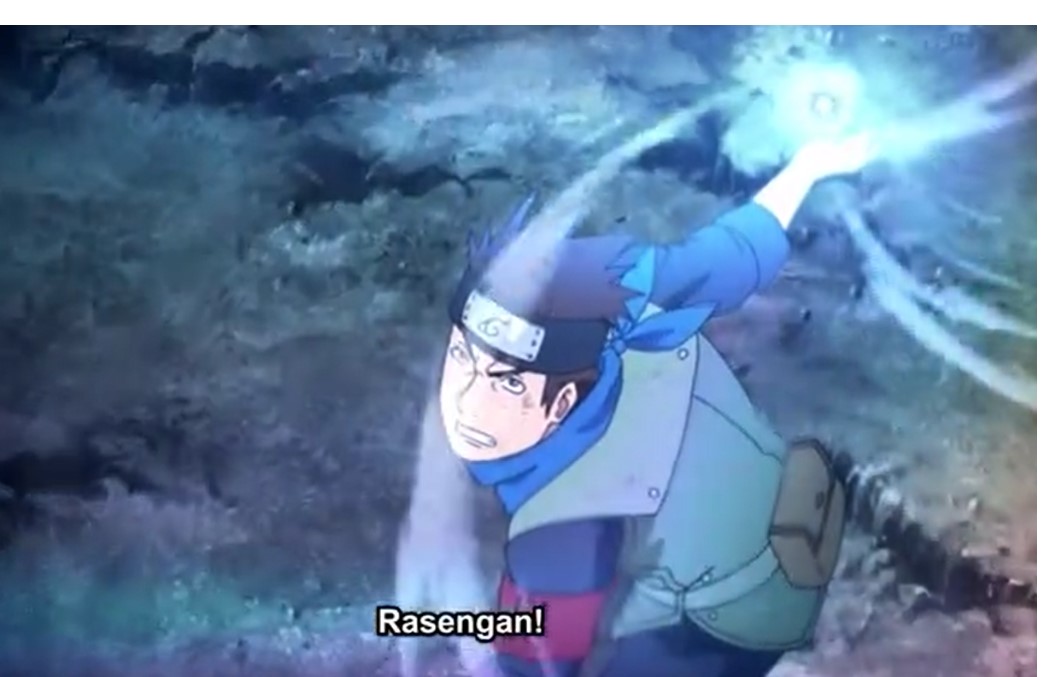 Boruto is worried that his teacher is risking his life and he can not do anything. Konohamaru vows that he will protect them even if it cost his life. Koji said it is fine Konohamaru can show him what Leaf jonin is capable of. Konohamaru sends his clone to attack Koji. Koji thought he was fighting with the real Konohamaru, who he sends flying. Koji is surprised to hear someone behind him unleashing a powerful attack.

Konohamaru attacks with Fire Style: Fire Dragon Bomb, and Koji exchange his position with a stick. Konohamuru is surprised that he burnt the stick instead of Koji. Koji appears behind Konohamaru and comments that Ninjutsu won’t work on me. They continue to exchanges blows, but Boruto is worried that his teacher is always getting sent flying. Konihamaru told Boruto not to worry about him.

Konohamaru notices that Koji’s power is above Mr. Ao’s level. He started wondering if the Kara can possess more power than this. Koji asks if this is the best that a Leaf Jonin can do. He started showering Konohamaru with punches, but Konohamuru unleashes a Rasengan. Koji also surprises everyone by unleashing a Rasengan. They both cancel each other’s Rasengan. After the blast, Konohamaru is wondering who this guy that possesses a Rasengan is.

Borutocan’t believes that there is another guy who can use Rasengan who is not from Leaf Village. Konohamaru ask Koji who is he, and Koji said Konohamaru’s technique is good, but he has a long way to go. Konohamarulooks at his lap and find that Koji has implanted a Toad bomb. The Toad bomb explodes and burns Konohamaru. Koji said no one could stop his flames Konohamaru will burn until he dies. Boruto gets angry, and his Karma got awakened. 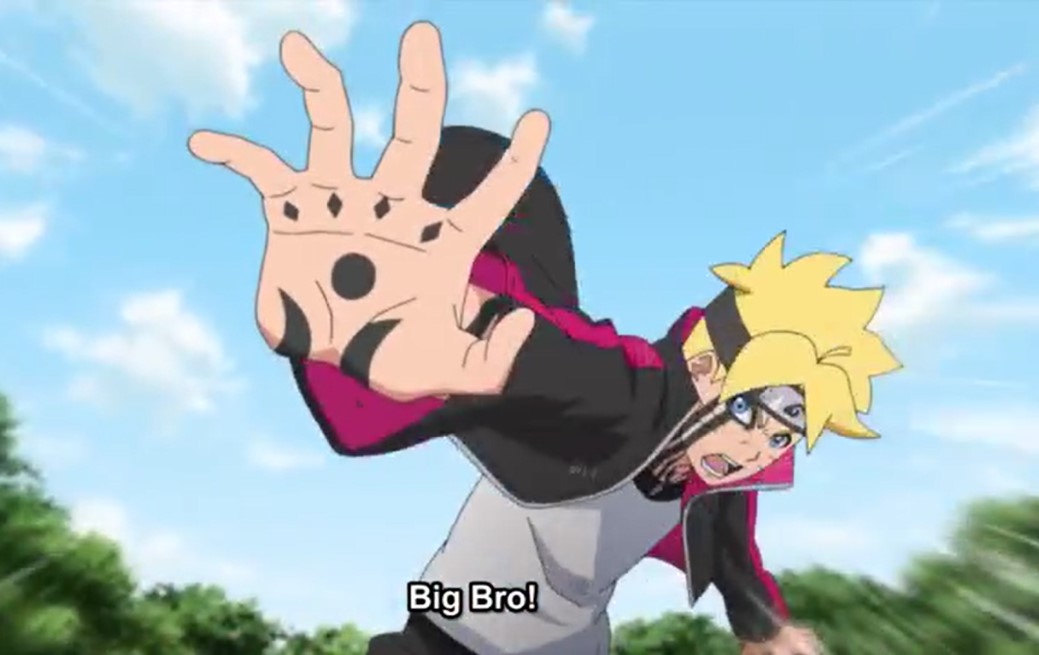 He used the power of Karma and absorbed the Sealing Jutsu. He also stops the flames that were burning Konohamaru. Koji is impressed that he is seeing the power of Karma for the first time. Hecommntes that it meant Momoshiki had chosen Boruto. Konohamaru wakes up and asks what is going on, and Mitsuku said the mark on Boruto’s hand has spread. Boruto looks at his hand, asking what this power is, and he falls unconscious.

Sarada went near Boruto, and Koji follows her. She wanted to fight with Koji, but he said he is withdrawing for now. He also said it is the first time that Boruto is using this power. They must take it as a reward since Boruto has shown him something interesting. Sarada asks Koji what that power that Boruto has just shown them is. Koji left the battle without giving them answers.

The Karma on Boruto’s hand vanishes, and he wakes. Konohamuru and Katatsuke bury Mr. Ao in the mountains. Konohamaru comments that he won’t forgive Mr.Ao for what’s did to Mogino. But Mr.Ao died as a shinobi since he saved Boruto. On the way back to Hidden Leaf. Boruto finds a guy lying on the ground with Puppets that are defeated. When he tries to wake him up, he finds that the guy has the same mark, just like him.

Anime Like ‘As Miss Beelzebub Likes’ That You Must Watch

Charlize Theron Net Worth, Awards and Earnings in 2021