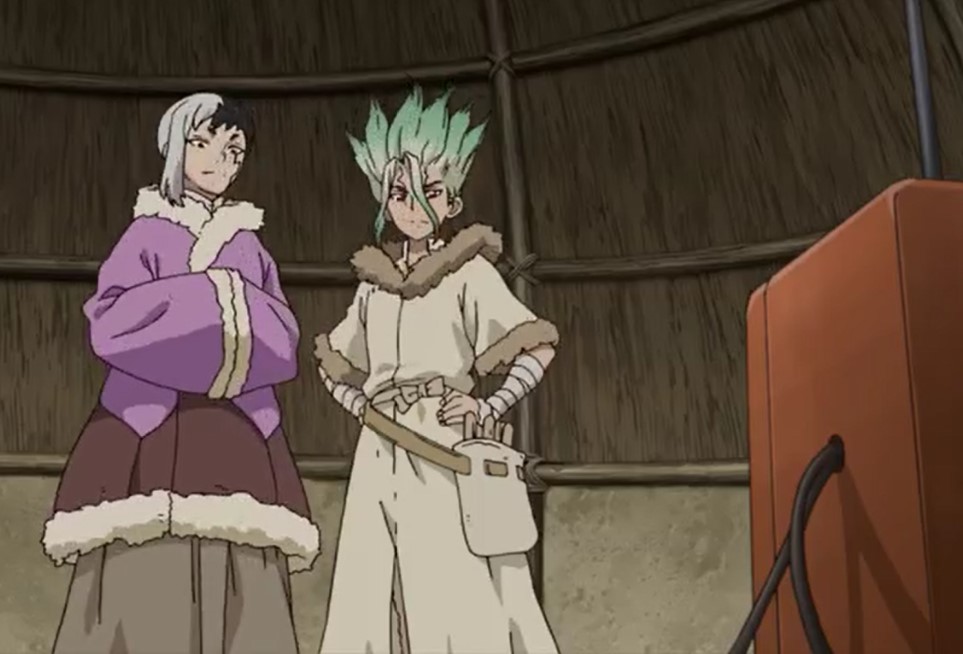 The scientist has managed to capture the target Homura before she HQ to report to her boss Tsukasa. Kohaku is the one who saved Homura from being smashed by a tree. The trio has managed to outsmart Ukyo and deliver the cellphone to Taiju and Yuzuriha. Senku receives that call when he is at the village and realizes that the mission was a success. Yo Uei is with his crew feasting at the mountains.

Earlier, Nikki feels suspicious of Taiju and Yuzuriha, and she spies on them in the morning. The two went to where Senku is buried. Senku told them to visit his grave every day, and no one will suspect that he is alive. When Taiji and Yuziriha visited the grave, Nikki followed them. Yuziriha notices that there is something hidden inside the grave, and she warns Taiju. They are afraid to dig it out since they might be someone watching over them.

Dr. Stone: Stone Wars Season 2 Episode 4 will be released on Thursday, 4 February 2021, at 10:30 PM JST. Dr. Stones can be streamed across different official streaming platforms; you can stream it on AnimeLab, Crunchyroll, and Funimation. Let find out how the battle will continue inside the Stone world below. 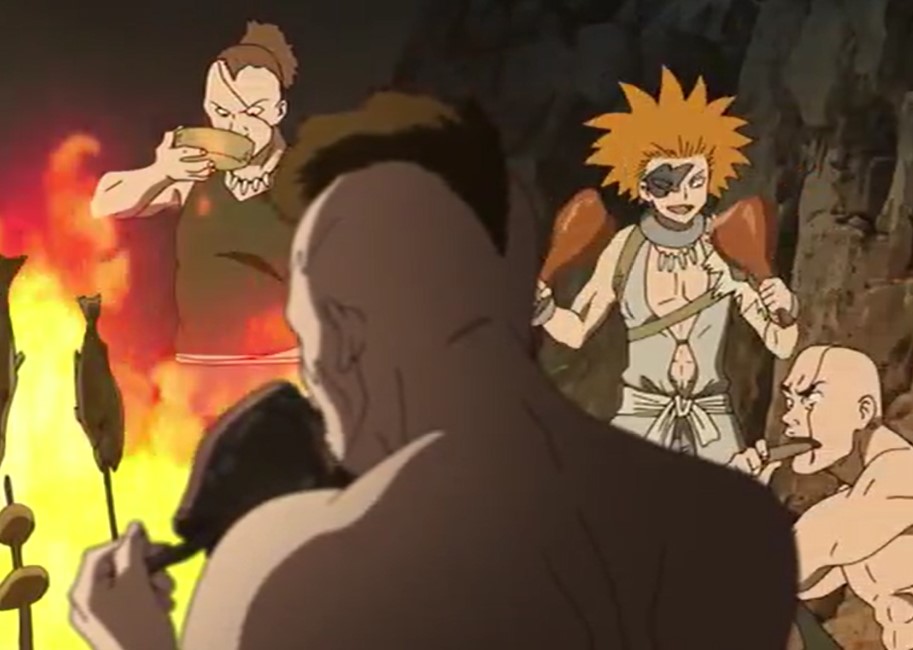 Taiju and Yuzuriha think that Senku and the others have left something for them. Taiju uses his bare hand and pulls what is inside the grave. He shows tremendous strength that shakes the ground, but Nikki is nearby watching them. Taiju has found out he has pulled out a cellphone and connects to Senku. They are both happy, shedding tears of joy, and Senku was missing to hear Taiju’s loud voice.

Out of happiness, Taiju yells that he is Senku, and Senku said he is not him. Kokyo and Ruri are glad that they can speak with their friends who are at the enemy base. Yuzuriha is pleased that it took only a year for Senku to make the first cell phone using science. Nikki is wondering why Tajui is crying and Yuzuriha is talking. She started asking herself if the two are talking with the dead.

Taiju continues to cry, and Nikki thinks that it is an anniversary of Senku’s death. Senku told Taiju that he is sure that someone is watching them. He told him to take someone from Tsukasa’s army and bring him near the cell phone. Tsukasa will have to make up any reason for them to believe him. Senku said he would tell him later why he is ordering him to do so. He can believe everything that Senku tells him like the idiot he is, even if it sounds crazy. 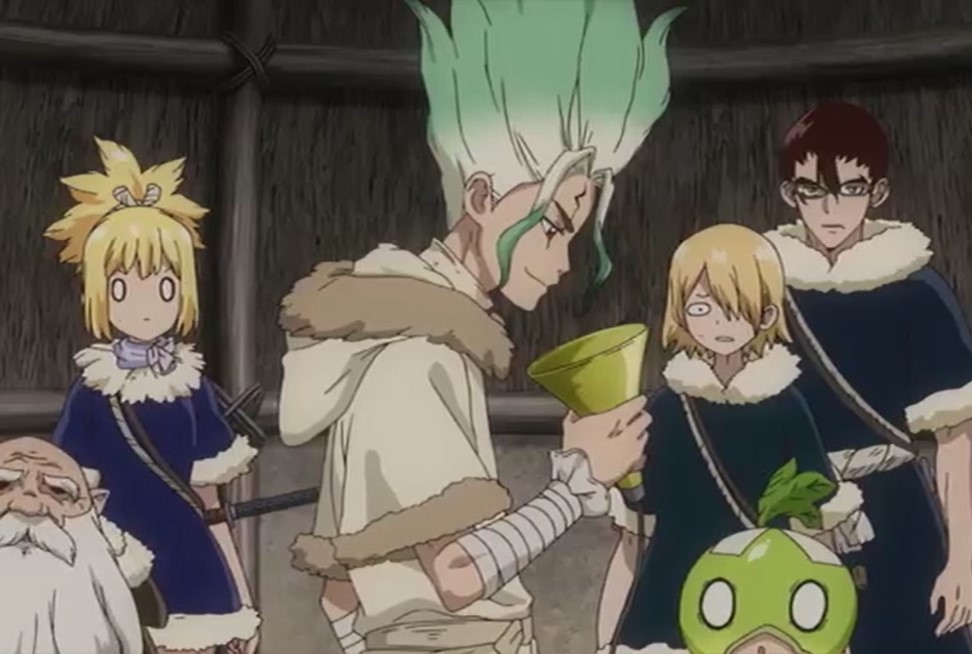 Kohaku comments that she has seen why Senku and Taiju survive against Tsukasa. Senku reveals that they don’t have time until Tsukasa’s army makes its full assault. Gen will return tomorrow, and he asks if Taiju got a message from Gen. Taijui said he hadn’t heard anything; all he saw is the cell phone. The crew thinks that something might have happened. While Magma, Chrome, and Gen are hiding in the forest.

Magma comments why they have to hide since they can murder the enemy. Chrome calms Magma down, and Gen said the enemy is Ukyo. Ukyo has the ability to hear anything, and when he shouts, he doesn’t miss his target. Ukyo is waiting for the trio to make a single move so that he can shoot. Chrome comments that they have to get Gen back to the Kingdom of Science. Then they can begin the cell phone operation to take down the Tsukasa Empire. 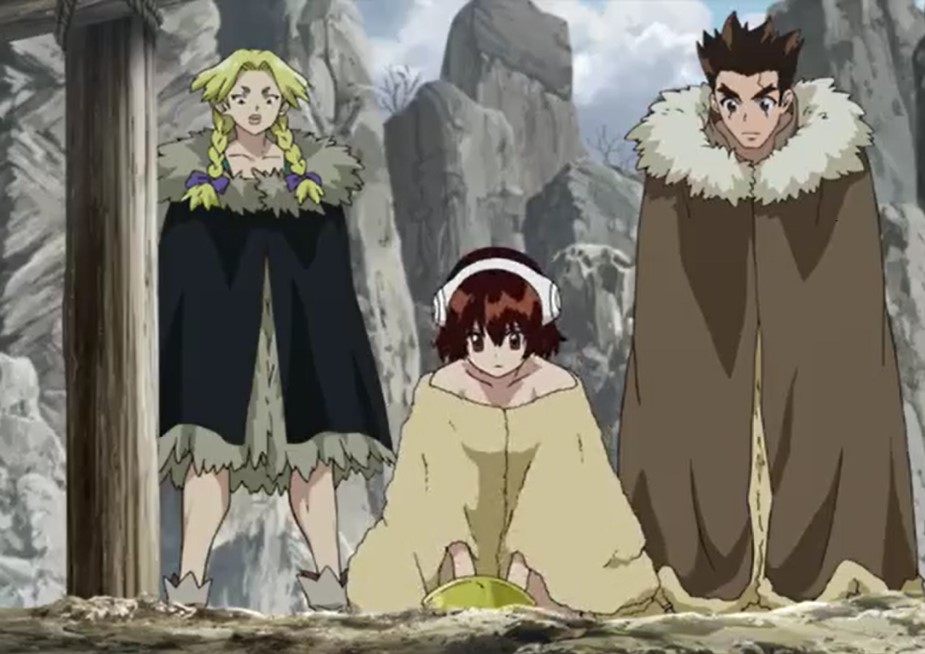 The Operation Take Down Tsukasa Empire:

Magma said if they only have to get Gen home, he has a plan. Magma said Chrome would charge and use him as bait. After that, Magma will use his muscles and smash Ukyo. Chrome agrees with excitement that it is a brilliant plan. He then realizes that he will get shot and die. Chrome gets angry at Magma for fooling him. Magma comments that Chrome is only worried about his life. Chrome uses science and makes explosives, and Gen gets an opportunity to go back to the Kingdom of Science.

Taiju manages to get Nikki from Tsukasa Empire to talk with Senku, but Senku hides his real name. Gen has also reached the Kingdom of science; he is acting as Lilian Weinberg. Senku is acting as Sebastian, and they are fooling Nikki. Taiju comments that he knows Lillian as an American singer. He asks Nikki if she knows Lillian, and Nikki said she know her. Lillian is talking in English, and Sebastian is interpreting into Japanese.

Nikki falls for their trick. She is thinking that she is talking to Lillian, who she adores so much and loves her songs. They prove Nikki by answering her correct answers about Lillian. Nikki vows that she will help Lillian with anything she needs. Gen even sings Lillian’s favorite song to convince Nikki. Nikki shed tears since she loves Lillian with her whole heart. The operation to take down Tsukasa’s empire is progressing.

With us here, that what he has to offer for the upcoming Episode 4 of Stone Wars. Find out more next time about what will happen between Tsukasa and Senku’s battle. Take a look at other recent details here: Dr. Stone: Stone Wars Season 2 Episode 3.