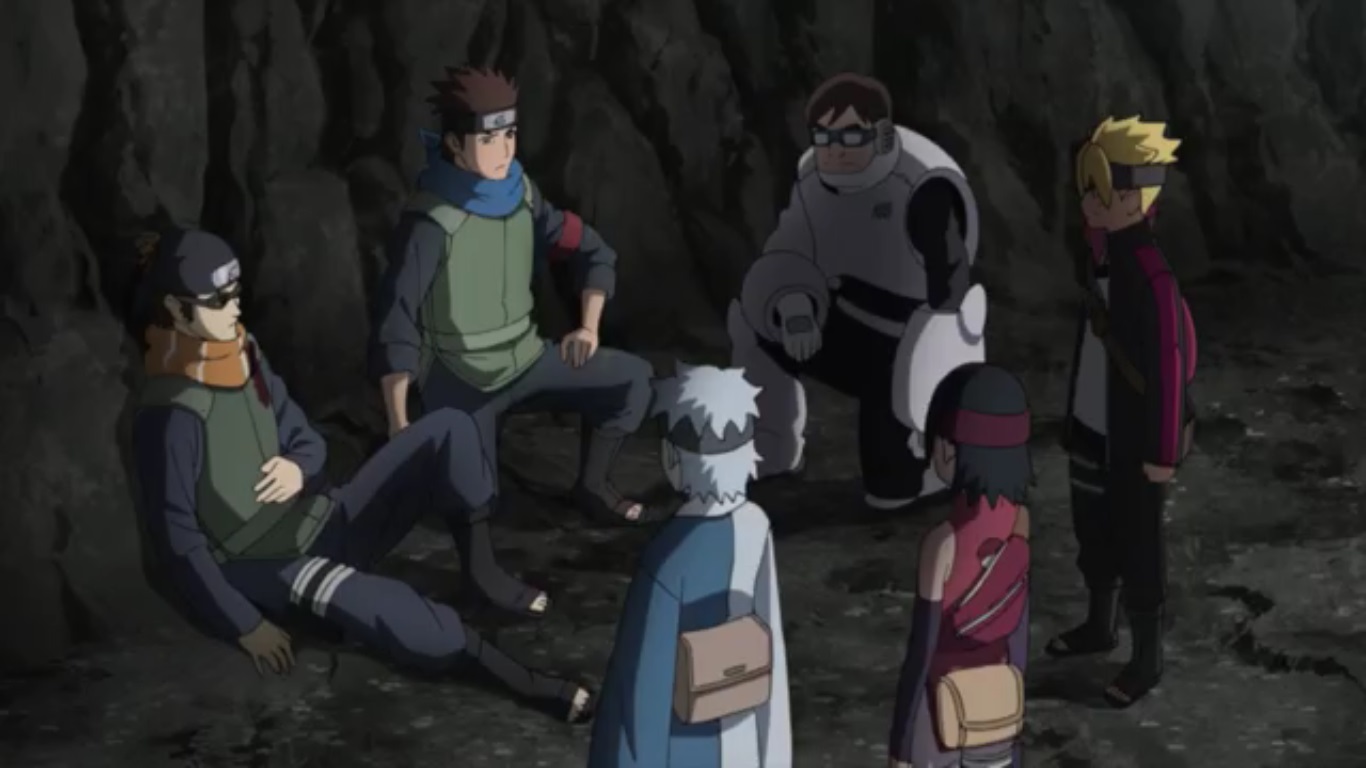 Boruto: Naruto Next Generations Episode 184 presented us with more updates to the ongoing Kara arc. The anime has been picking up pace slowly as the Kara members and their outers make their appearances. The incident started with Jigen, Kara’s leader, who wanted to expose traitors within his organization. He arranged for an unnecessary transformation of what he called “The Vessel” to lure out untrustworthy inners. As he had expected, the traitor made a move and might be behind the crashing to the airship in the Land of Fire.

Konohamaru and Mugino immediately left for the crash site, but considering the strength of Kara, they did not do much against mere puppets. The last episodes finally wrapped the introduction up when Ao came out as one of Kara’s members. We also saw him conversing with Kashin Koji in recent episodes when Koji gave him a mission to retrieve the vessel and kill anyone who has seen the ship.

Boruto and his team followed to check on Konohamaru after his communications devices went offline. Upon their arrival, they found puppets lying on the ground. They appeared to be scientific ninja tools, just like Katasuke has identified them. Boruto and his team did not stand a chance against them. But thanks to Katasuke, they managed to use his new suit to defeat them.

Boruto Naruto Next Generations Episode 185 comes out this weekend with more updates on Ao’s pursuit of team 7. In the last episode, Ao tries all he can to kill team seven together with Mugino. But with Mugino’s sacrifice, the rest of them now have a head start as Ao is currently pursuing them with an intent to kill. The new episodes of Boruto will be available for streaming on Crunchyroll and Funimation.

Boruto and Team 7 Arrives at the Crash Site

Team 7 finally arrived at the crash site in the last episode of Boruto anime. They thought puppets appeared to be scientific ninja tools, and thanks to Katasuke, they finally defeated them. Katasuke went inside the ship to inspect and was amazed at the technological advancements the ship had. He also came across a coffin that seems to be empty. In t the early scenes of the episode, we also saw a mysterious individual looking over the crashed airship. So this is probably the person who was inside the coffin.

With the puppets defeated, team 7 moved to search for Konohamaru and Mugino. It was thanks to the Ninja hound dog, which tracked down Konohamaru’s scent. They found him hiding in a cave, and they shared intel on their findings. But Ao appeared out of nowhere, and as he has a mission to kill all at the crash site. He did not hesitate to kill the rest of team seven together with Mugino.

Ao has shown an improved battle prowess despite his missing limbs that are replaced by scientific ninja tools. When he appeared, he identified himself as a tool. We are not yet sure what are Ao’s motives, but since he is Kara’s member, he must be very loyal to them. He did not appear as someone who would betray the shinobi world. But now, he is no longer a shinobi and has turned out into Kara’s outer. He might be under a genjutsu just like Katasuke was, but we will find out more on that in the upcoming episodes of the anime.

Ao has shown exemplary skills in combat and easily defeated Katasuke in his newly modified scientific ninja suit. He displayed swift movements as he quickly took advantage of the surprised team 7. Boruto asked him what he was doing there, but that did not help much. Ao told them that he was there to kill them and asked what they did with the vessel. But they appeared clueless, so he decided that he will have to kill them. He doesn’t intend to let any of them live and is now in pursuit.

It took Mugino’s sacrifice to give Boruto and his team a head start as they now withdraw. Konohamaru noticed that in the state they were in, they could not beat Ao. He had scientific ninja tools at his disposal, and on top of that, they have also lost Mugino. Ao did not hesitate to kill Mugino, which shows how loyal he is to Kara now.

We are still not yet sure what his motives in joining Kara are. Or what exactly happened to him after the surgery that left him abandoning the way of these shinobi. He also intends not to let them escape, so since he has body modifications, he must be just as capable. So he might soon catch up to team 7. Boruto anime has not yet shown any serious battles ever since the Otsotsuki invasion.

Even Konohamaru, who we believe to be a powerful shinobi, has not been that useful so far. We have not seen him in a serious fight, and all he did was getting beat up by victor. So this makes one wonder if Konohamaru is strong or if he is just an average shinobi.

Mugino’s sacrifice might not be enough to keep Boruto and team seven away from Ao. Ao is now a scientific ninja tool, which means that he has infinite stamina and would catch up to team 7 in no time. Konohamaru decided to retreat with everyone else in respect of Mugino’s actions. What has been a little surprising about Boruto anime is the lack of many actions from Konohamaru.

He was a promising shinobi from his Naruto Shippuuden days, that we are all looking forward to his development. And he was also supervising team 7, so he took on the role that presented him as capable. But so far, Konohamaru has not been involved in any serious fights, and we have not yet seen how strong he has become. But for now, let’s wait to see what will transpire in case Ao catches up with them. The next episode will come with more developments on Ao’s pursuit of team 7. For more upcoming anime episode updates, check our anime news weekly updates.