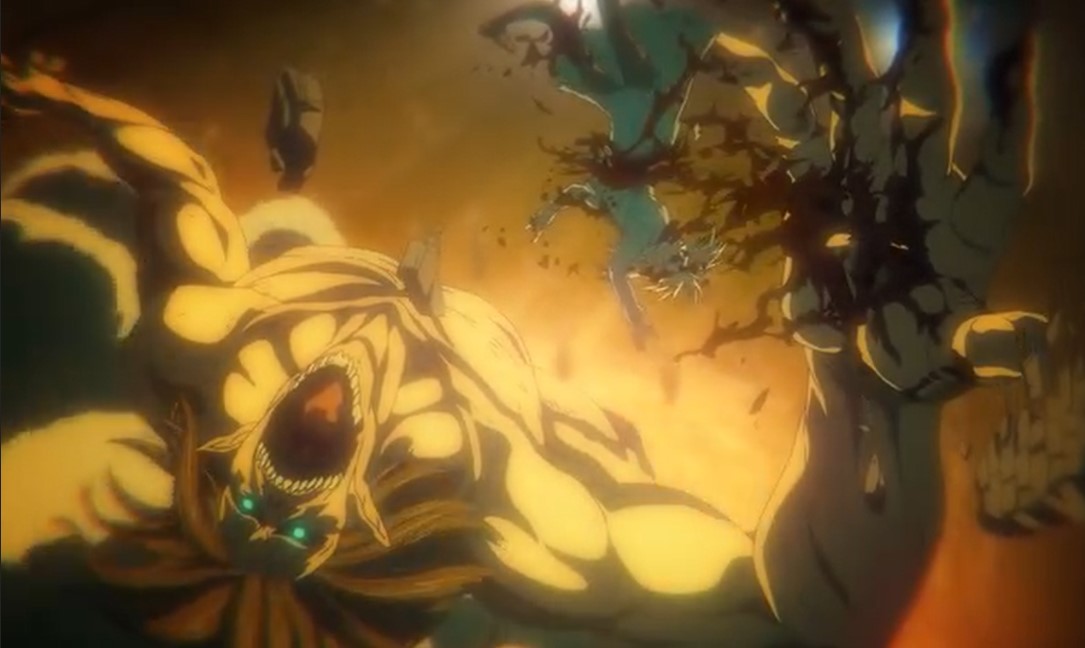 Mr. Braun and Falco listen to Mr. Kruger, revealing the truth about his past and how he got injured. Kruger also remembered when he was walking in the woods with his friends. That is back before losing his right leg, and that day, they talked about a man who hanged himself at the farm. The trio thinks that the man wanted someone to forgive him before he dies.

Kruger tells Braun that it has been four years, and Braun realizes that Kruger was his best friend. He was the one with him that day when the incident happened at the farm. Falco asks if the two are friends, and Krugger agrees, saying that they have many catching up to do. He also doesn’t know where to start, and Braun can’t believe that Kruger was him in his past all alone. It seems as if he knows that Kruger is no more.

Attack on Titan Season 4 Episode 6 will be released on Monday, 18  January 2021,  at 12:10 AM JST. Make sure to convert the time so that you will get the latest episode as soon as it is released. Visit this anime’s website at shingeki. Tv for more updates and enjoy watching this anime on Crunchyroll, AnimeLab, Funimation, and Netflix. Let’s find what the updates have to offer below.

Bruner reveals the childhood name of Kryger, which is Eren. Meanwhile, Lord Tybur is about to address at the stage. The Tybur family guards remind him that it is time and the Azumabito family shows up. Miss Kiyomi said that she just wanted to see Willy face to face. She gives him courage since he said he is getting caught by the stage fright, and Krugger tells Braun to sit down. He also said that they are in a good spot where they can talk.

Falco, Braun, and Kruger are at the lower level of the stage where Willy is about to address. Kruger said the building above them is a residential complex, and Falco notice that Kruger’s hand is hurt. Kruger said it is just a scratch, and he asks Braun to sit down so that they can talk properly. Falco decided that he must leave so that the two can talk in private. Kruger tells Falco that he must remain and listen to what he is going to say.

Mr. Braun also thought that Annie has passed away, and Leonhart said she is not dead. He reveals that she promised him that she would come home alive.  On the stage, Magath can believe that they are declaring war from all places’ internment zone. Gabi said that Marshal Civil is here. She said that she was not even expecting that she will see the Marleyan army’s heart here in the internment zone. And there are ambassadors and famous families from all over the world.

Other soldiers reveal the Tybur family’s influence is something else even though they are Eldians as well. Udo is wondering what taking Falco and Mr. Braun so long since it is about to start. At the underground house, Braun calls Krugger by his other name Eren asking why he is here. Kruger said he is the same as Braun. He doesn’t have a choice. Since the conference has started, Krugger said they could listen to that Willy is going to say.

Willy tells everyone he has the story to tell them, and he started to narrate his story. He said approximately one hundred years ago, the Eldian race ruled the world with the Titans’ power, between the appearance of the founder, Ymir, and the present day. Titans have stolen the lives of so many people that the present population of the world could die thrice and still not compare.

Because of Titans, an extraordinary number of races and the cultures, and histories have been stolen from the world. That slaughter has defined human history and the Eldian Empire history. When the Eldian Empire ran out of enemies, it turned to the killing of its own kind. That is when the great Titan war began, and eight Titan shed blood in combat among themselves. In these desperate times, one Marleyan saw a path to victory.

He was their hero, Helos, by artfully waging an information war. Will reveals everything that has happened between Titans, Eldians, and the Tabur family. He also revealed the man that end that war, King Friz. Willy said that Eren Yeager is the man who stole the Founding Titan. Falco and Braun heard that, and they know that Kruger is Eren Yeager and Flcxo is upset that Kruger has been lying to him.

Krugger apologizes, saying that Falco has been a great help to him. Falco realizes that Krugger has sent him to mail letters every day. Kruger reveals that the letters were not going to his family; they were going to his allies. Kruger reveals that when the wall was destroyed that day, his mother was eaten by a Titan. He doesn’t understand who is a bad guy between them and him since Willy is turning the world against him.

Braun reveals why they destroyed the wall, and it was to save the world. Braun remembers that Kruger has once told him that they would die a suffering death, and he realizes that’s why Krugger is here. Braun takes blame for the wall since that day he wanted to be a hero. Krugger gets up and shakes his hands with Braun. He started powering up and transforms into an armored Titan. He blasts off the building and appears at the stage where Willy is addressing.

Stay with us for more updates. If you have missed the recent episode, you can read them here: Attack on Titan Season 4.