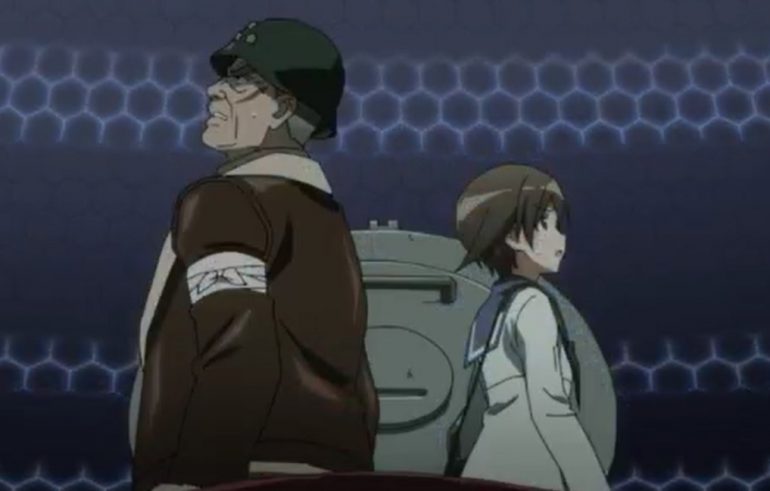 Today we will be looking at the Episode Finale of Strike Witches: Road to Berlin. The Strikers board on planes and reach the mission zone. It has been announced that bombers must prepare the anti-Neroui fuel-air bombs. Yoshika tells Shizuka that being nervous is normal and she must back her up. All units are ordered to release final safeties and drop the anti-Neroi fuel-air bombs. They started attacking the Neuroi nest with explosives, and everything started to explode, followed by a direct attack on the core by the 501st, protected by Yoshika’s massive shield.

They got chased by a bomber-type Neuroi; Shizuka decided to remain and manage to destroy the Neuroi’s core after locating it. Meanwhile, at Kiel, the military prepare their next move with a plan of using Yoshika’s magic power. Suddenly a bomber, Neuroi, attacks the poor,t and they left Yoshika for her to recover while they clash with the Neuroi. Shizuka tries to use the same attacks as earlier she used to defeat the Neuroi and the core is not where she expected.

Strike Witches: Road to Berlin Episode 12 will be released on Wednesday, 23 December 2020, at 10:00 PM JST. This Anime releases its new episode every Wednesday. Keep in mind that this post may contain the next episode; you can skip them if you want to. You can officially watch this Anime on Crunchyroll. Take a look at the latest development below.

During the World War II era, the world has been invaded by a mysterious alien force known as the Neuroi. Neuroi takes on forms similar to aircraft and spread a corrosive miasma. The world’s armed forces decided to form a partnership with other armies to fight with the Neuroi threat instead of fighting among themselves. The regular weaponry does not affect the Neuroi’s technology. The military decided to call upon Witches since their plans were not working.

It is in the year 194,0 June 5 at the Empire of Karlsland at Capital City Berlin everything went dark at night. Humanity was faced with the sudden appearance of mysterious enemies; they are called the Neuroi. They attacked the City, blasting everything until the next day, they managed to destroy most of Europe. Many people’s homes and nations were stolen in a blink of an eye. In their eleventh hour, humanity developed a new weapon with the sole purpose of defeating Neuroi.

The witches use their technology to create a powerful girl with the gift of magic. The girls fall under the Striker Unit and witches worldwide were gathered to use the Striker Units against Neuroi. The elite unit of witches was formed the allied forces’ 501 joint fighter wing. They become known to the world as the Striker Witches.

The witch is a young girl who has magic powers, and she is capable of fighting against the Neuroi. The Witches, inspired by famous real-life pilots, grow animal ears and tails when using their magic. They can use special machines known as Striker Units. Strike Units feature designs based on real-life aircraft to fly through the sky and increase the strength of their magical ability during the battle.

Suomus is an independent volunteer Aerial Squadron, focusing on a dogfighter named Tomoko Anabuki. The young girl is Yoshika Miyafuji, a girl from the Fuso Empire who joins the titular Strike Witches to investigate her father’s death. She also wants to help in defeating Neuroi. The brave Witches team up with another Fuso girl named Hikari Karibuchi. She joins the titular Brave Witches to replace her injured sister Takami. She will be fighting in her place.

The Neuroi wanted to destroy the port Yoshika uses her shield to keep it in the air. The Strikers manage to find its core and blast it due to worn out Yoshika fell unconscious and they grab her before she hits the ground. The military base soldiers celebrate their victory. The doctors reveal that Yoshika needs 10 days to recover her magic power. The military refuses to wait, and they decided to launch another attack using the Landkreuzer P. 1000 Ratte escorted by the 501st.

Ratte is not aware that Yoshika is going to be part of the battle. During the battle, Ratte’s crew are covered by special armor to deflect Neuroi attacks. They destroy the wall-type Neuroi, but not without damage, with Yoshika tending to the wounded soldiers. Noticing that Neuroi core deploys a huge barrier surrounding it, covering the Ratte’s retreat. Learning that Yoshika was part of the battle, the 501st makes a plan to bypass the barrier using some underground tunnels to rescue her.

For this upcoming week, that’s what we have to offer for you about this Anime. That’s how we conclude Episode Finale of Strike Witches: Road to Berlin.