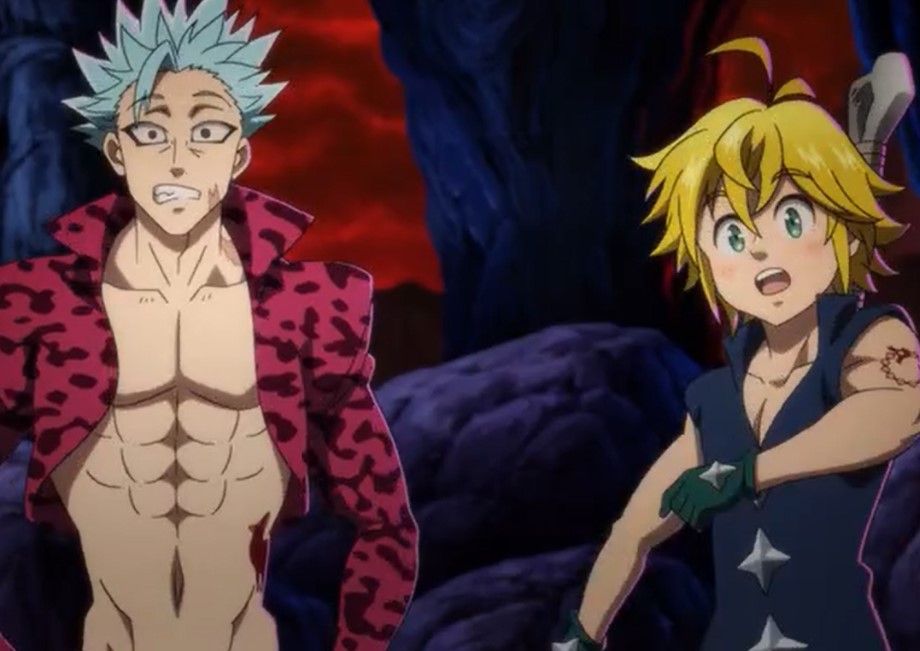 Meliodas tries to become the Demon King to save Elizabeth, but Merlin and Other Sins fights against Zeldris and the demon race. At the same time, Ban headed to Purgatory to save Meliodas’s soul. Throughout the journey, the two ended up reunited, and Meliodad speaks his heart out. He reveals that he has given up, and he thought he could not go back to the other side after being in hell. He thought he could never see Elizabeth again.

Meliodas asks Ban why he came to hell, and if he is not tired of being immortal, Ban. Ban replies that he is not tired, and he came to take him back, which makes Meliodas ask if he knows how to return. Meliodas realizes that Ban does things without a plan, and he scolds him for just throwing himself inside a hell without knowing how to get back. Ban said that he did not choose since it was the only way for him to get Meliodas Back.

The Seven Deadly Sins: Dragon’s Judgement Season 5 Episode 3 will be released on Wednesday, 27 January 2021, at 5:55 JST. You can watch this Anime officially on Netflix since it is an original Netflix series, and for more updates, you can also visit its official website. Let take a look at the battle between the Sins and the Demon Race below. 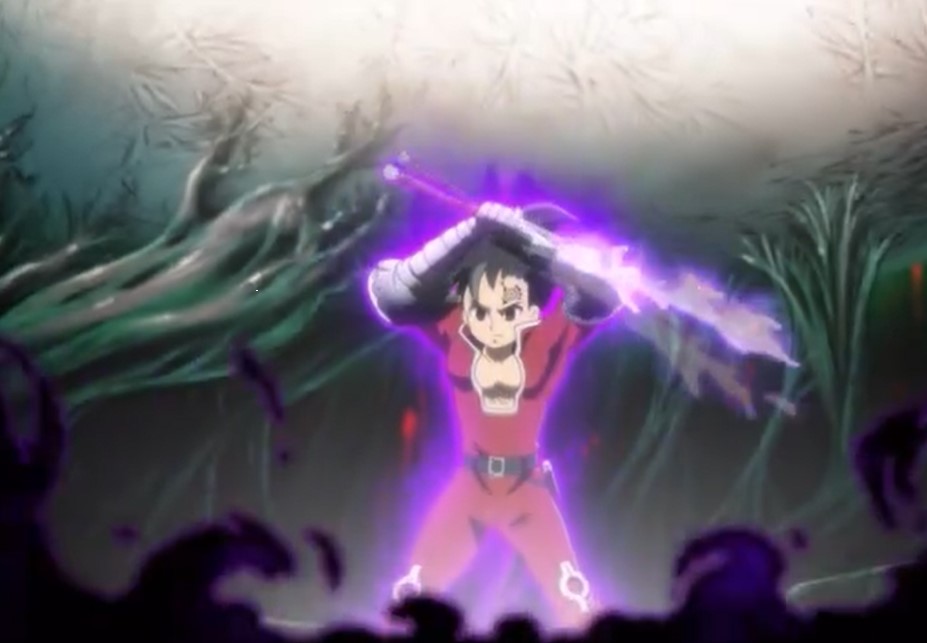 The two jumped from the top mountain and said they would find a way while they are together. But something was watching in the and when the land on the ground. Meliodas reveals that in Purgatory, there two types of monsters. The first are the souls who fell in Purgatory as the foreigners, and the other is natives born here. Ban and Meliodas chase the natives’ ones since they want to use them to make clothes.

He attacks with Fox Hunt, but he missed when Melidoas wanted to attack the monster, sent him flying. Ban asks Meliodas that what happened to his enormous power. Meliodas said that he is just his soul and emotions, and if they don’t get out here, he will become a burden to Ban. Ban decided to take down the monsters all by himself. Meliodas realizes that due to his father’s curse, he was separated from his body. And he was trapped in hell since his father wants him to be his successor.

Ban defeated the monster, and the two enjoy its meat then use the monster’s skin to make warm clothes. Meliodas, thanks, Ban, for coming. Ban said Merlin said that the Demon King had caught Meliodas, and he thought he was locked up. Meliodas says it is true, but his father left him after he turned into a monster. Meliodas thinks that they have to meet with his father, and they might find a way to get out of hell.

The two finished creating their new outfit, and Ban has cut his beard and long hair. They started their escape mission and encountered monsters that took Melidas after his Full Counter failed to take them down. Ban save Meliodas by taking all of them down using a Crazy hunt. Meliodas said after their escape mission, he would undo the curse mark on Elizabeth and drink booze like never before.

Ban said he is going to revive Elaina and party every day with booze. They both rest and enjoy eating the meat of the monsters that they have killed. Meliodas comments that it has been 500 years ever since they met again, but Ban’s ability to adapt never ceases to amaze him. Ban replies that he is just used to his immortal body. Meliodas reveals that Ban will be the first and only human to maintain sanity in Purgatory. 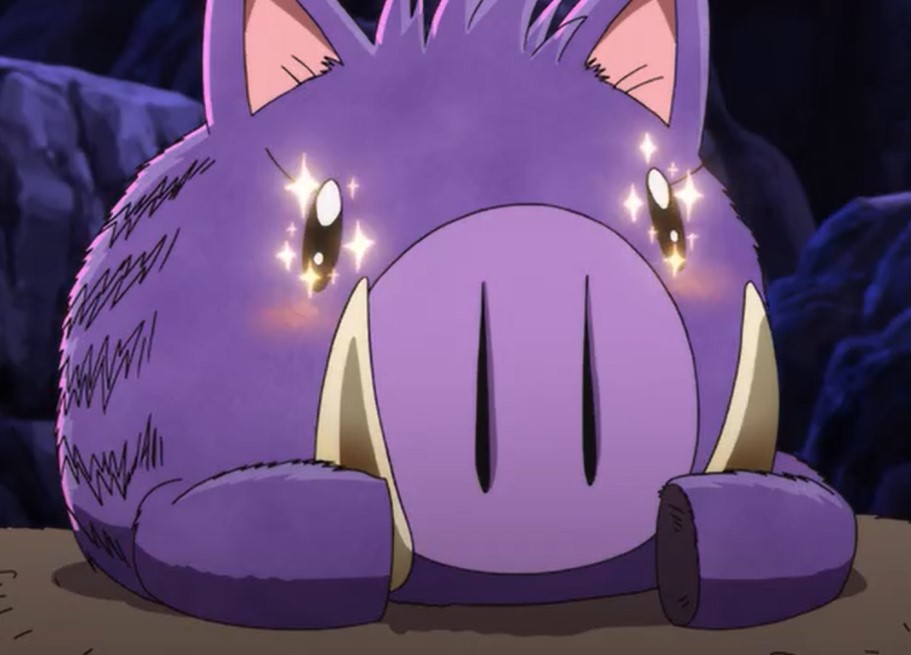 Ban replies that he be just glad that he will gain enough powers to fight the Commandments. While they are talking, they sense the presence of someone inside the dark. Bans ask if he is the Demon King’s pawn, and the guy said he could take them to him. He said that they must first help him with something. Ban asks who he is, and the guy comes out to the light revealing that he is Wild, who is looking for his young brother.

Meliodas shouts that it is Hawk and Ban said it is Porky. The guy said he is Wild, and Meliodas asks if his little brother is Hawk. Wild said that his little brother’s name is Mild, and Mild disappeared when he was born, and he forgets his name. Wild ask them if they have met with someone who looks like him. Ban laughed and said there is no doubt that it must be him, and they look like two drops of water.

Wild screams, and Melidas said he screams like Hawk when he is hungry. He welcomes the two inside his house and gives them a tea saying that it comes from a butt of wild boar. Wild reveals that Mild left 8 billion years ago, and when he was born, he was kidnaped by the Demon King. Mild was sent to a different world like this one, and Meliodas said 16 years ago, Hawk woke up in Britannia.

Meliodas said it makes sense since a minute in Britannia is one year here. Wild said he doesn’t know why Mild was sent there. Meliodas said it is because the Demon King wanted Mild to watch on him since he is Demon King’s son. Back at the dark territory, Cusack and Chandler are defeated by Escarnor. Zeldris said he would show them his true powers and make a posture that Chandler said they don’t need to fight. Chandler realizes that when Zeldris is in that posture, no one interferes during the battle.

Belias said she cut Zeldris with her demon slayer. Zeldris unleashes the Ominous Nebula that cuts everyone and sends them to the ground. Escarnor can stand his ground, but others are being attracted like magnets by Zeldris’s powers. Merlin is using teleportation so that they won’t get near Zeldris. Merlin reveals that in that state, no attack works on Zeldris, and they will be attacked by the attacks that they can not see. While Ban, Wild, and Meliodas head to the Demon King.

Take a look at how the battle has begun here: The Seven Deadly Sins: Dragon’s Judgement Episode 2. Let’s meet again next week with new episodes and updates.