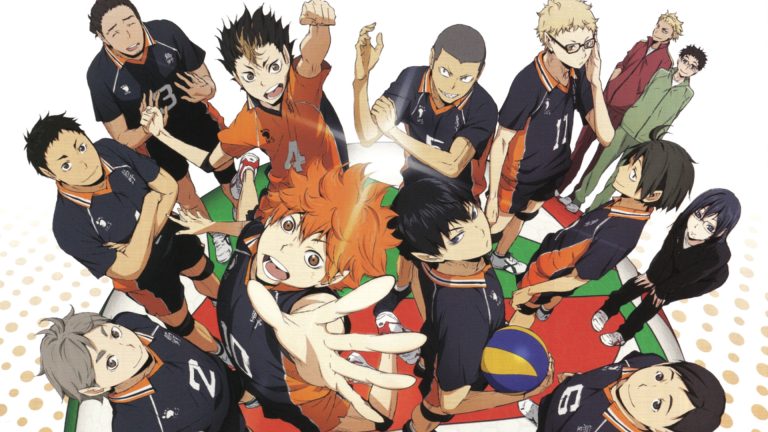 Haikyu!! has risen among the ranks to become one of the best sports anime
Himanshu Bhardwaj
Editor's Picks
June 27, 2020 4 min read

If you think that the sports anime genre is boring, then you most likely never watched a good sports anime. a decent sports anime is sort of a well-written drama, but with sports involved. The characters must be interesting with different motivations and rich backgrounds that cause you to want to cheer or boo them.
The animation must be a number of the simplest to create sports interesting and fun to observe.
Every Year we are greeted with sports anime but some remain in our hearts that we feel motivated and have feel-good felling by watching it.

Regarded as the best basketball anime out there, this anime can be called one of the best sports anime in general. It is a classic anime that also has been at the top in terms of manga and has one of the best selling mangas of all time. A naturally talented boy named Hanamichi Sakuragi who is a gang leader with no luck in love finds himself to be in the school’s basketball club to impress Haruko Akagi. It ran for a total of 101 episodes and is full of basketball action, love, and a cutting edge comedic chops that even average anime fan will be invested upon.

This anime is based on football, created by the author of another hit manga called Captain Tsubasa which among the best selling mangas ever. The anime features on Kanō Kyōsuke, a teenage high school student just transferred into Jyoyō Orange High School. Kyōsuke’s older brother is the illustrious and extremely famous A.C. Milan football, player. The anime has a total of 52 episodes that keep you entertained, also this an underrated anime which was always under the radar. Each episode deal with various problems of the football team, their matches, wins, losses among many others.

Megalobox is made in celebration of the 50th anniversary of Ashita no Joe. The anime will give you some classic 90s anime vibes like cowboy bebop and Trigun. The series is a sci-fi anime based on the backdrop of Boxing, a second season is also been announced which will be set after few years of the first season. The anime is set in a futuristic world where licensed citizens live in a wealthy part of the city while unlicenced ones live in the outskirts of the town. The series revolves around an underground Megalo boxer named Junk Dog ( Gearless Joe) who enters a boxing tournament that will decide the strongest Megalo Boxer of them all.

It is among the best anime in recent times, since starting airing in 2014 it has a growing fanbase, Based on volleyball it was earlier thought that this series would not be able to leave an impact on the audience as the sport is not among the popular sports around the world. The main character of the anime is Shōyō Hinata who got obsessed with volleyball after watching a school volleyball team getting into the nationals on TV. The anime doesn’t only focus on the main character but onto other characters and developing characters around as a team.

This anime has a unique animation style that makes it different from the rest of the anime on the list. It remains one of the underrated works from Masaaki Yuasa who is known for making a good amount of anime like Tatami Galaxy. The characters are excellent and are a joy to observe develop. Their conversations feel natural and there are some moments of witty dry humor. the 2 friends are total opposites, one being energetic and cocky while the opposite is quiet and passive. The anime is for true anime lovers which don’t have any fan service and you will be more invested in the sport of table tennis after watching this anime.

This is the anime gets unnoticed by the people around the globe I recently get to know about this, and man I watched the whole 26 episodes in 2 days. This anime doesn’t feature on a single character but rather than the whole team of players as they rise among the ranks. East Tokyo United is a football club that is on the verge of the relegation to the lower level and one of the staff hires ex, ETU player Tatsumi Takeshi and what now he has to offer you have to watch this.

The protagonist of this anime, Ryoma Echizen is a tennis prodigy who joins the prestigious Seishun Academy, a private middle school famous for its strong tennis team. He is talented but still cannot defeat his father, yeah our main character has some issues with her dad. He is already an incredible player when the show starts. In fact, he’s reasonably a genius and has already won a variety of championships.