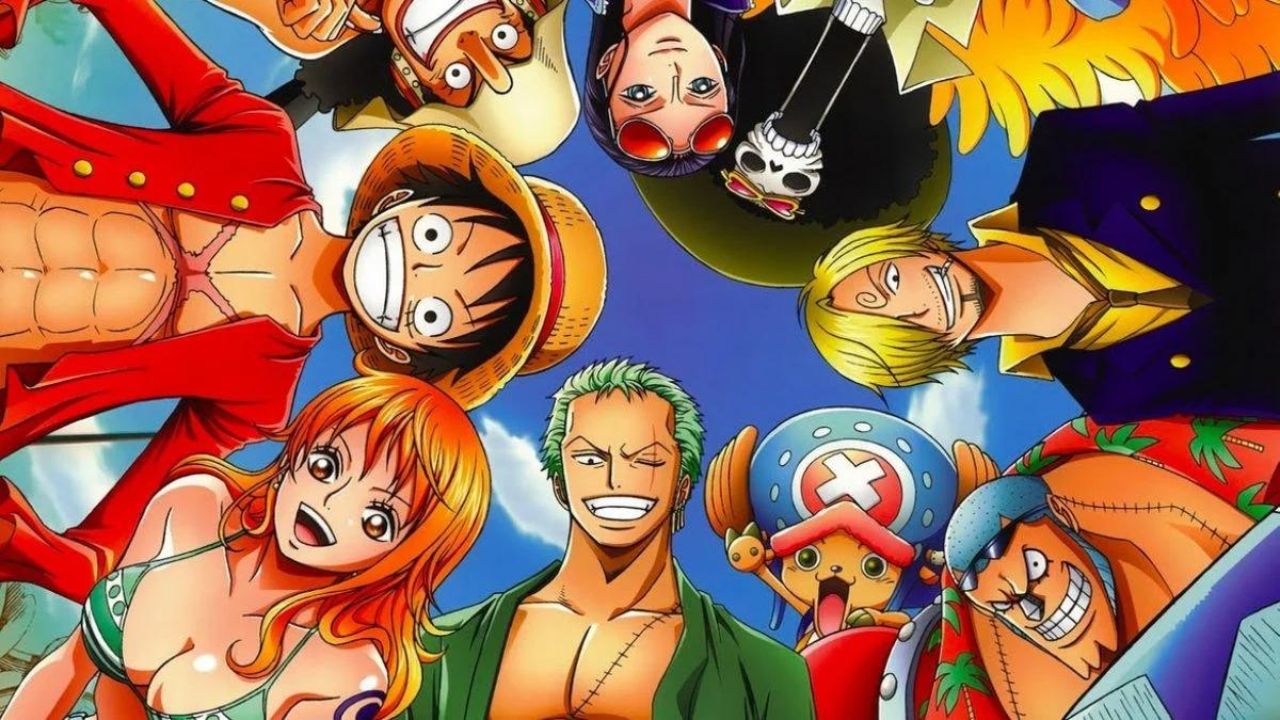 One Piece is a vast series that started its narration in 1977. At first, Oda Echiiro, the writer of One Piece, originally planned to end the series in 5 years, but it has been more than 25 years since the series started, and it is still going on. Given that this series has one of the longest runs in the history of Mangas winning countless awards on the domestic and international levels, One Piece is huge, with more than 1000 chapters of the series and 1000 episodes of anime.

It is an incredible fleet that only some series have in the world. Since it is so vast, it can be easy to get lost in the number of issues of One Piece, how many stories and arcs the series have, and how the manga and the anime compare.

Well, here we are with the One Piece chapter-to-episode guide, which will tell you the comparison of how many chapters and episodes the anime has for a particular story and arc. So without any further ado, here is your One Piece Chapter To Episode Guide. Here we bring you the latest updates on the One Piece Series.

One Piece series begins with the East Blue arc that depicts the story of our main character departing from his hometown to gather a few crew members and follow his dream to become the king of pirates in the new world, also known as Grand Blue. East Blue Arc Starts with a small arc inside known as Romance Dawn, consisting of chapters 1 to 7 and episodes from 1-3. 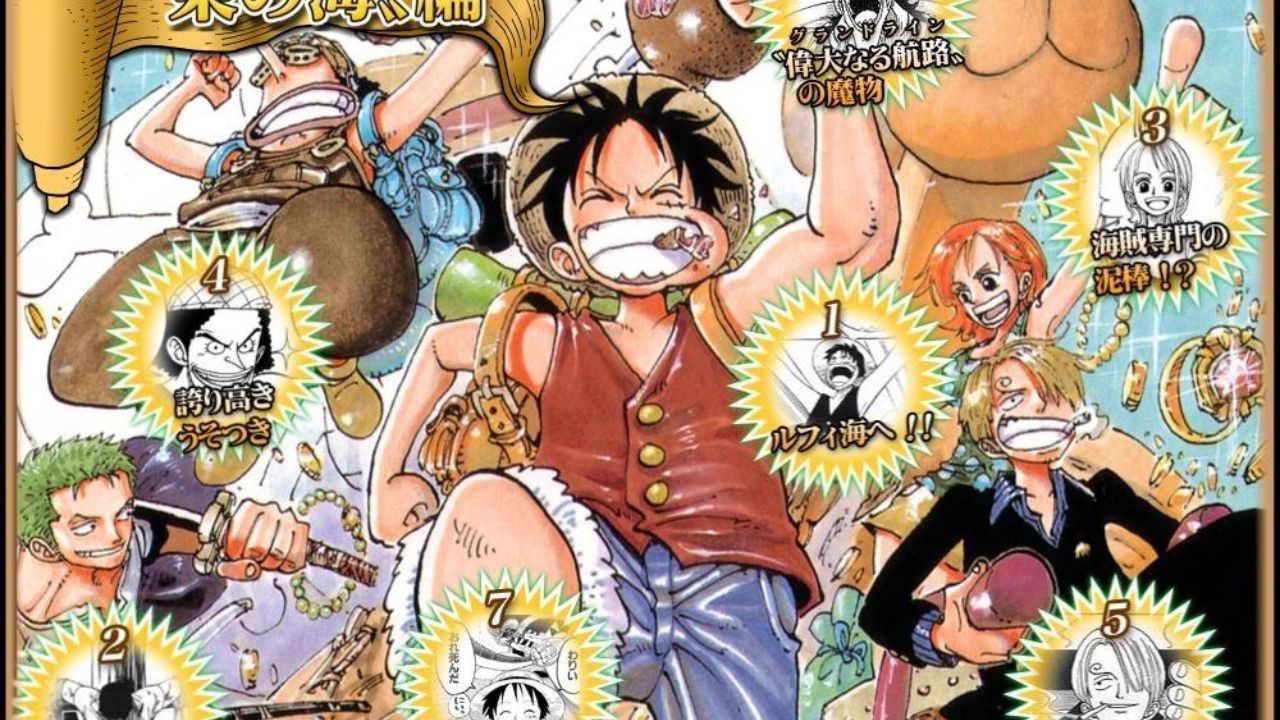 Enter Sanji in the Baratie story in the East Blue, it consists of One Piece chapters 42-68 and Episodes 19-30. Then Luffy faces his ever villain Arlong at the Arlong Park and gets his first ever bounty of 20 million. Arlong Park has chapters from 69-95 and episodes 31-44. The last tale of the East Blue Saga is Lougetown which has One Piece Chapters 96-100 and episodes 45 and 48-53. There are a few fillers in the east blue saga, which has episodes 46-47 and 54-61.

Straw Hats move on to Little Garden, where we first see the giants, which have chapters from 115-129 and episodes from 70-77. Entering Chopper on the Drum Island arc, Choppers the straw hats in this story, which has chapters from 130-154 and episodes from 78-91. Then begins the main event of the arc, Arabasta, which not only gives Luffy a 100 million bounty after he defeats a warlord of the sea, but a new member known as “Nico Robin” enters the straw hats. 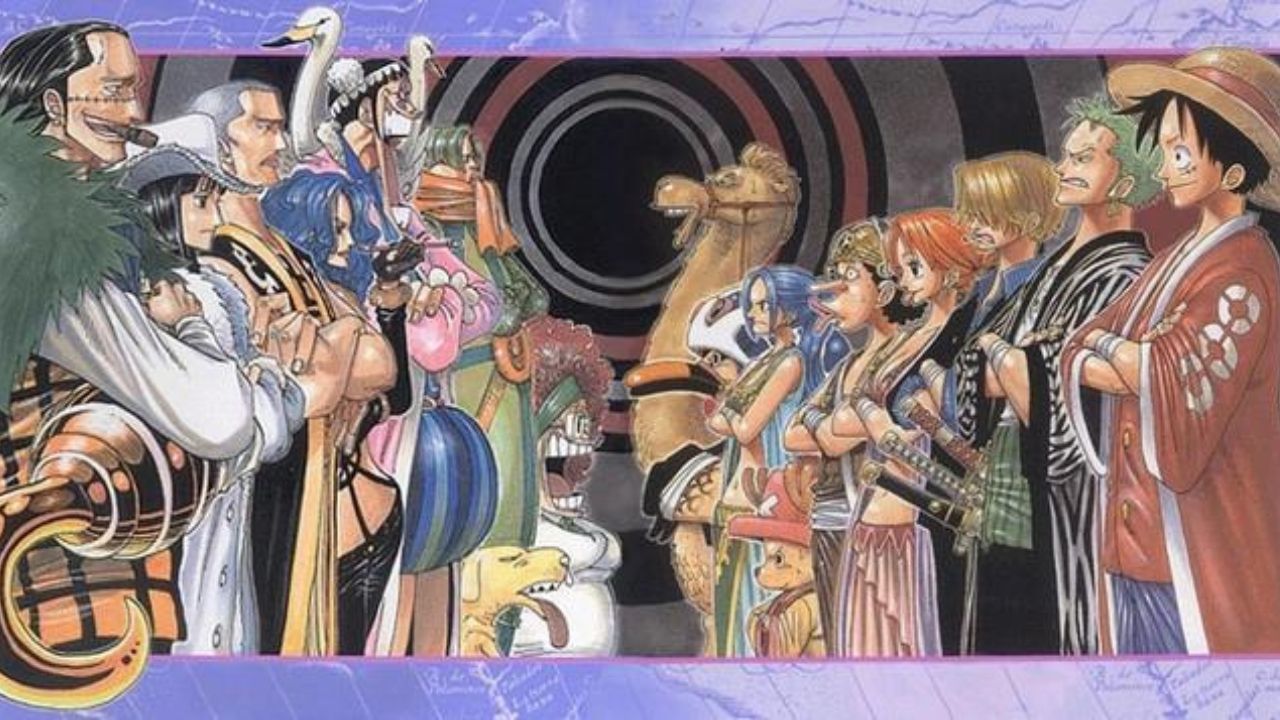 Arabasta has a total of 63 chapters, the first longest arc in One Piece from chapters 155 to 217, and the anime has a total of 39 episodes for the arc from 92 to 130. Before moving on to the Skypiea arc, One Piece anime consists of fillers from episode number 131 to 143.

The next big arc that follows after Arabasta is known as Skypiea, and it is one of the most important arcs as the straw hats learn that Gol D Roger was also here and left a mark here. The arc starts with Jaya, which consists of One Piece, chapter number 218-236, and episodes number 144-152.

Then the main arc starts from chapters 237 to 302, having a total of 66 chapters, whereas it has 43 episodes starting from episodes 153 to 195. The end of the arc follows a filler in the anime from episode number 196 to 216, where straw hats try to get out of a marine base they found themselves in. 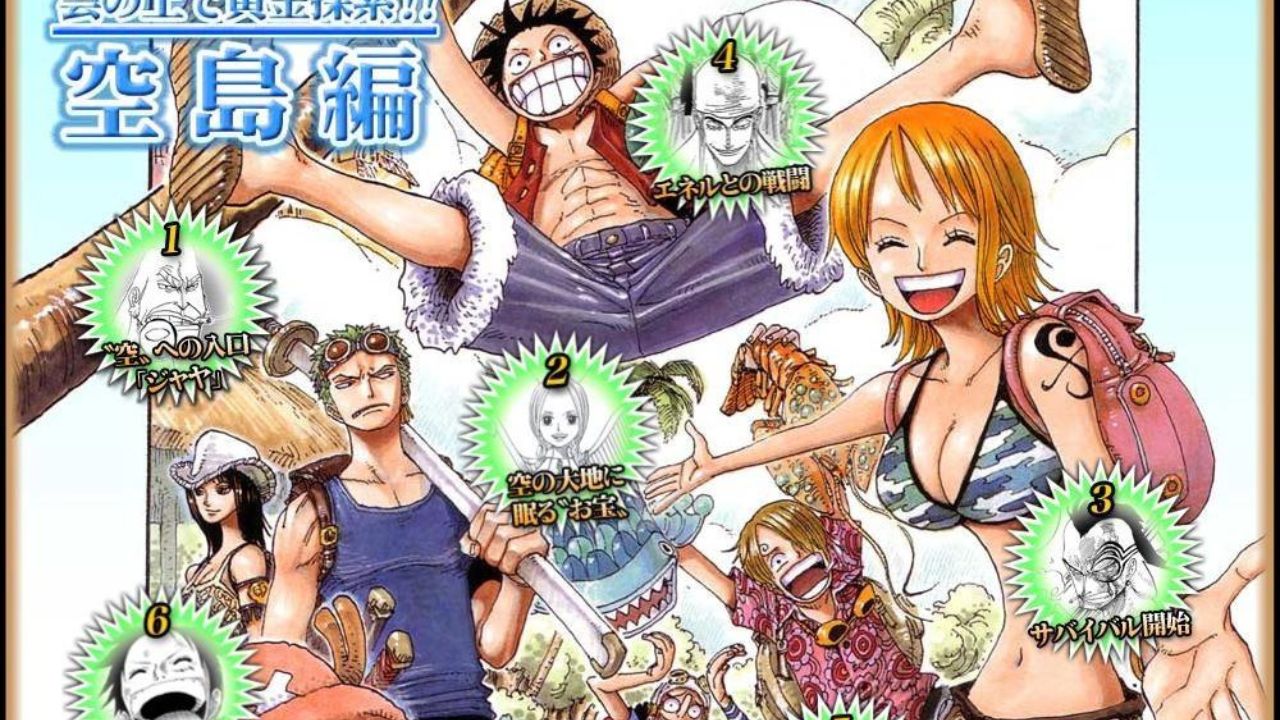 Water 7 and the Ennis Lobby is where the straw hats have to fight the Marines officially for the first time, and we also know that Monkey D Garp is Luffy’s grandfather. We also have a new member, Franky, the shipwright joining the crew, and Luffy fights with Ussop. Furthermore, we finally say goodbye to the first ever ship of Straw Hats, and Franky makes the new ship known as Thousand Sunny. 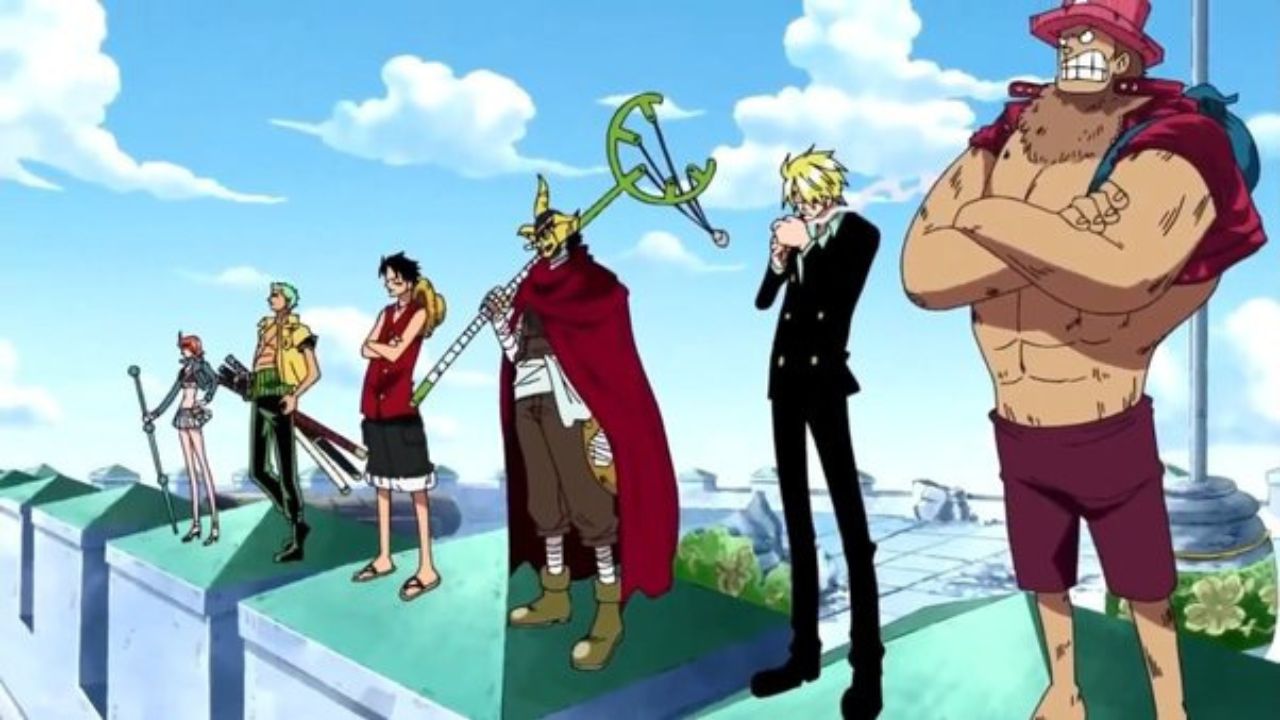 Immediately after water 7, Straw Hats embark on Enies Lobby and fight the CP9 members, where we see Luffy using gear two and gear three with Zoro also using Ashura nine-swords-style. Ennis Lobby ends with Robin asking Luffy and the straw hats to take her to the Seas, not forgetting the iconic Sogeking. It has been narrated from chapters 375 to 430 and in anime episodes from 264- 290. The arc follows with a filler of a few episodes and a post-Enies Lobby Story from chapters 431-441 and anime episodes from 313 to 325.

Just like every arc of One Piece, it starts with small anime fillers, and then we see Luffy defeating another warlord of the series known as Gecko Maria. We have literal skeleton Brook joining the straw hats, who asks if he could see ladies’ panties. The manga series has narrated from 442 to 489 chapters and anime episodes from 337 to 381. Following an anime filler, we enter the last arc of the series before the time skip.

Summit War Arc is still considered one of the best, if not the best, arcs of the One Piece series. The crew gathers on Sabaody Island, where they encounter a new admiral, Kizaru, and if not were to Kuma’s help, they would have died. Sabiody arc is from One Piece chapte490r 490 to 513, and in anime, it is from 385 to 405 episodes.

After the straw hats get separated, we see Luffy in Amazon Lily Island in chapters 490-513 and episodes 408-417. Following Luffy entering Impel Down to save his brother and meeting Jinbei in chapters 525-549 and episodes 422 to 452, there are fillers between the episodes. 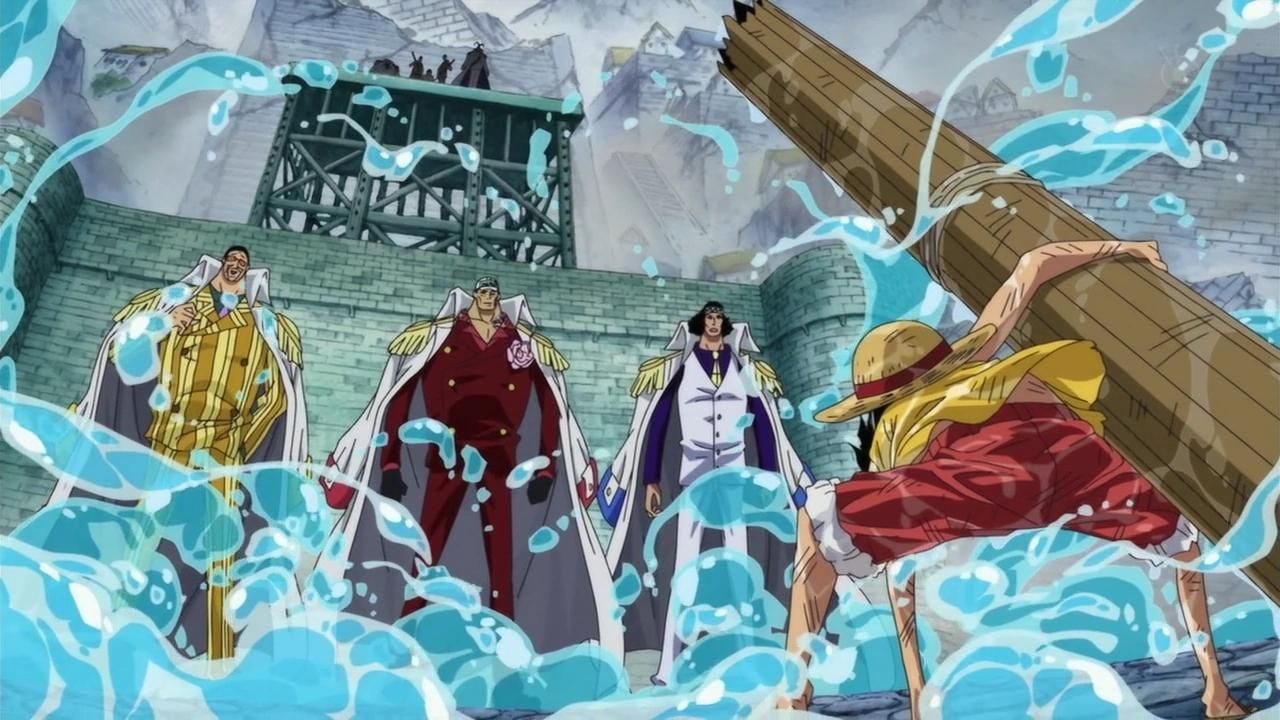 Luffy in front of three admirals!

Another filler arc following the Impel Down starts the Summit War Arc, also known as Marine Ford Arc, where things get turned, and at the end of the arc, the straw hats decide to train for 2 years in separation. Marine Ford Arc is narrated in chapters 550-580 and anime episodes 457-489. There is also a post-war arc were straw hats decide to take a break and train in chapters 581-597 and episodes 490-516.

There are only 5 arcs after the time skip of two years, with six being the final, which just started, but they are all huge, and some even have more than 100 chapters and episodes in their arc. The arc starts with Straw hats meeting on Sabody Island again after two years and embarking on Fishman Island, where they meet the first ancient weapon Poseidon who is a mermaid named Shirahosi. 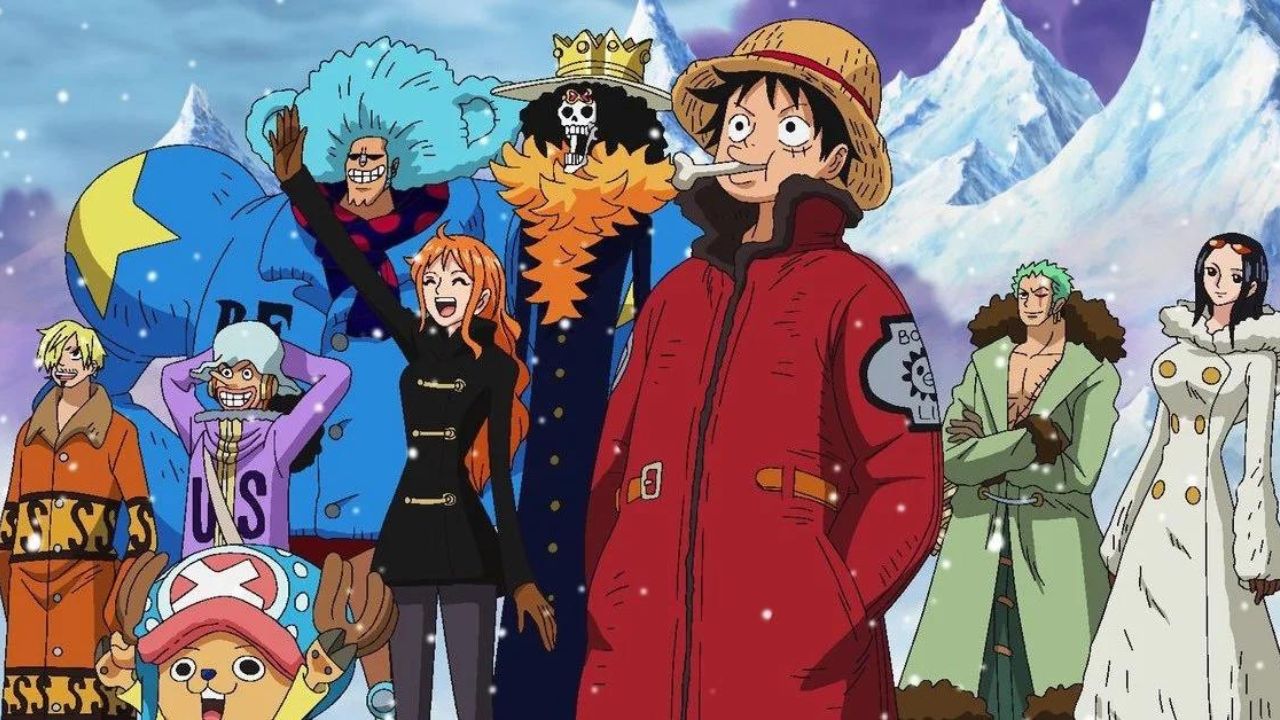 Then the second longest arc of One Piece starts as of this writing, Dressrosa from chapters 700-801 and episodes 629-746, where we see Luffy using the gear 4 for the first time, defeating another warlord yet again. Before the start of the Whole Cake Island, there are few fillers in the anime, and the Zou arc is narrated in chapters 802-824 and episodes 751-779.

Whole Cake then starts after Zou, but there is filler in the anime before it. Whole Cake Island has a total of 78 chapters from 825 to 902 and anime episodes from 783 to 877. Before Wano, the longest arc of the series, we have a Levely arc of 5 chapters from 903 to 908 and episodes 878-889. Wano Arc starts from chapter 909 and ends on 1057, which has a total of 148 chapters. The anime is still displaying the Wano arc and is halfway done as of this writing. 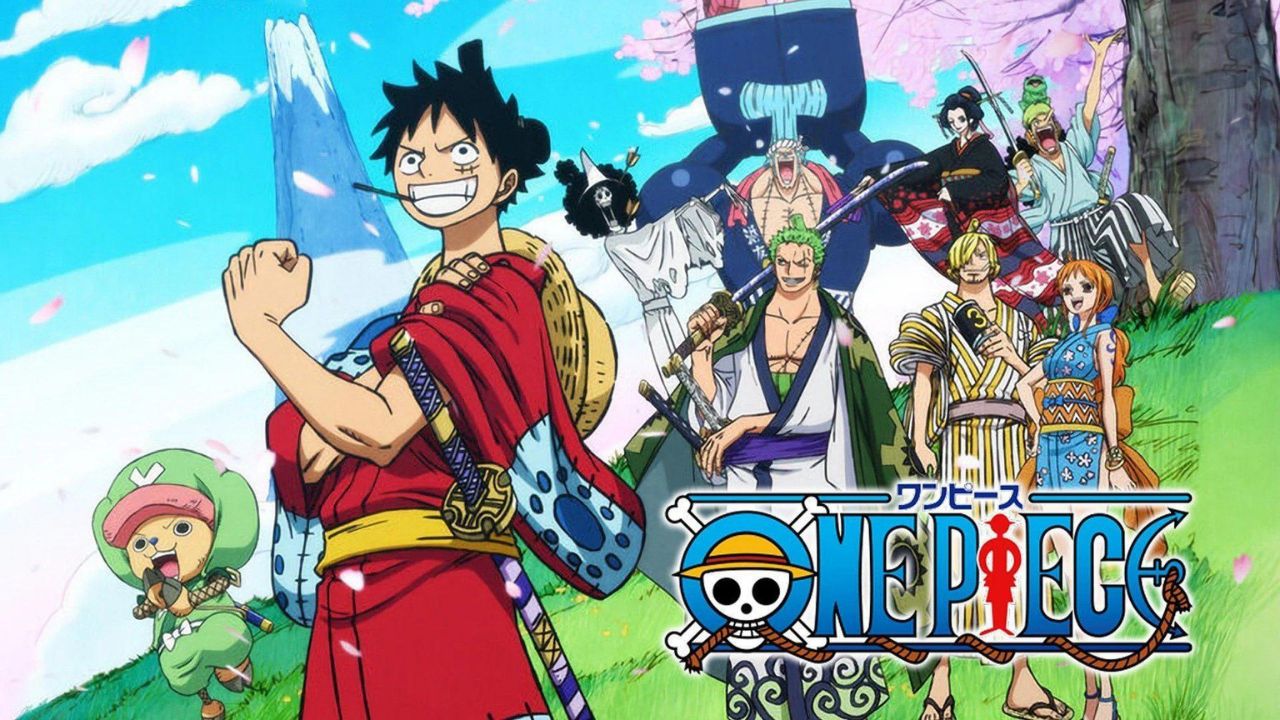 Hope this One Piece Chapter To Episode Guide was helpful to you. Now that One Piece is in its final arc, what do you think about the pace of the series? Was Wano worth a total of 148 chapters? Comment your thoughts regarding the One Piece series below.

Also Read: When is Haki First Introduced In One Piece?