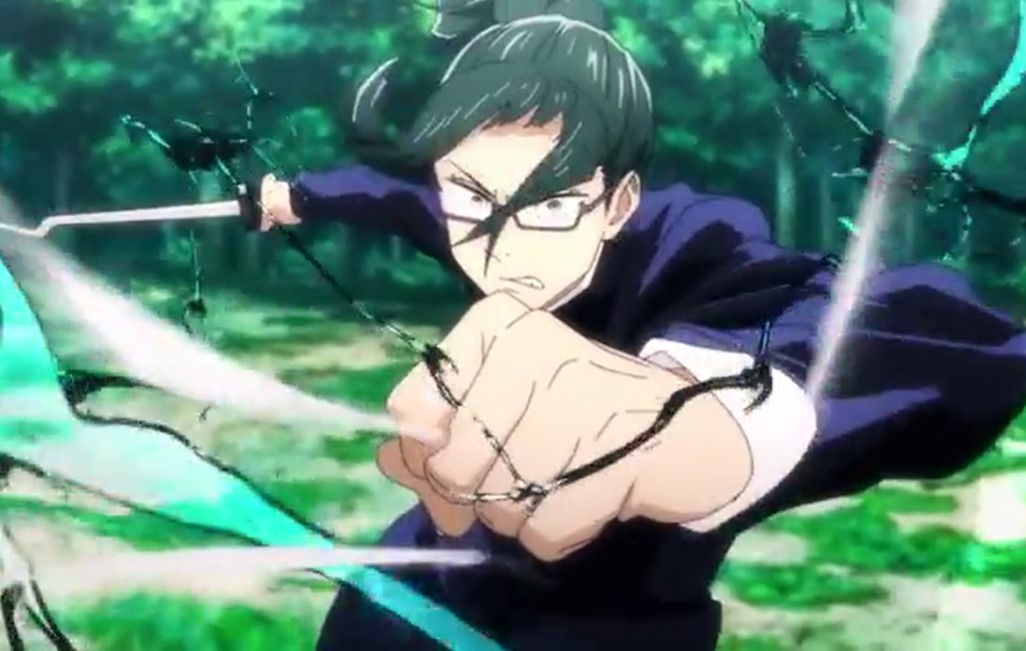 Panda has just defeated Mechamaru Ultimate and left him on top of the building. He told him that they would meet next time. While the battle between Yuuji and Todou still continues. Miwa is clashing with Maki, and she realizes that Maki is stronger. Miwa is worried that Maki is using long weapons, and she wants to get closer to her. She is also wondering why Maki is pushing her back since she is just only fourth-grade.

Miwa thinks that Maki is only capable of defeating a second-grade cursed spirit. Maki landed a swoop that nearly sends Miwa over the edge of the cliff. Miwa questions herself why Maki is able to swing a long sword in this forest with so many obstacles on the way. Maki landed a chest kick on Miwa and a swoop of the sword that sends Miwa over the cliff. Miwa splashes with the water, and Maki jump from the top with the final blow.

Jujutsu Kaisen Episode 18 will be released on Saturday, 13 February 2021, at 1:25 AM JST. Jujutsu Kaisen is officially available on Crunchyroll and Netflix. Let’s find out who will win between Maki and Mai below. 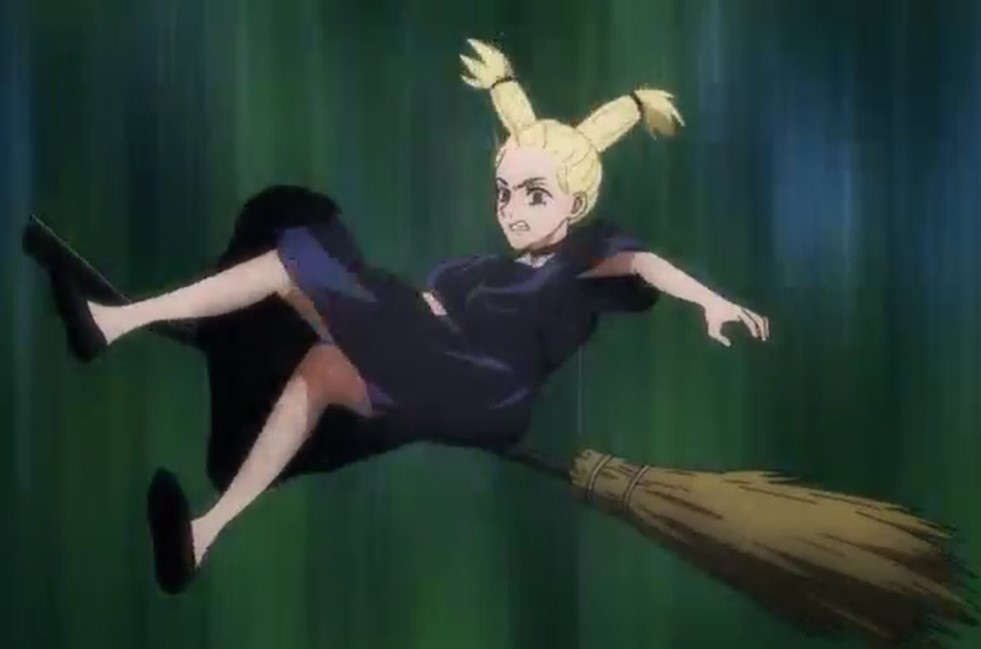 But Miwa manages to move in time, and Maki misses. Miwa unleashes a New Shadow Style: Simple Doman in the middle of the river. Miwa thinks that her sword style will allow her to attack anything that enters the 2.21-meter radius of her domain on full-auto reflex. Her Quick-Draw is specialized against enemies attacking head-on, and it is the fastest technique of the new shadow school wrapping her blade.

Miwa thinks that when he focuses her full strength on creating an opening. She will land a final blow and finish Maki. Maki notice what Miwa is up to, and she cut her spear in half to make a three-way attack. She sends the first piece of a spear, followed by another piece. Maki follows those two pice and manages to break the radius around Miwa. She pushed her back while stealing Miwa’s sword. Miwa realizes that she uses a sword stealing style.

Maki comments that Miwa has a nice sword while pointing at Miwa with her sword. At the same time, Nabara is still clashing with Momo. Momo hits Nabara with her flying broom, and Nabar is angry that she hurt her face. Momo lectures Nabara about being a Jujutsu Sorcerer. Nabara send s her flying using a hummer blow and comments that she is used to getting hurt. Momo thinks that Inumaki’s words make her not attack Nabara at close range.

She realizes that Inumaki told them that cursed speech uses the power of words. It imbues cursed energy into sound. So everyone on his team must protect their brain and ears with cursed energy. Cursed speech is a technique specialized for use against cursed spirits. Nabara continues to attack Momno with nails, but Momo keeps her distance. Momo told Nabara about the sacrifice that Mai has made.

Nabara told her to keep quiet about her misfortune. She unleashes a Straw Doll Technique: Hairpin that blows every tree near them. Momo flies away using her broom, but the attack chases her. Nabara managed to pins Momo on the ground and decided to use a squeaky hummer for Momo not to die. She hits her with the squeaky hummer multiple times. When she wanted to land a final blow, she received a blow that sent her flying. 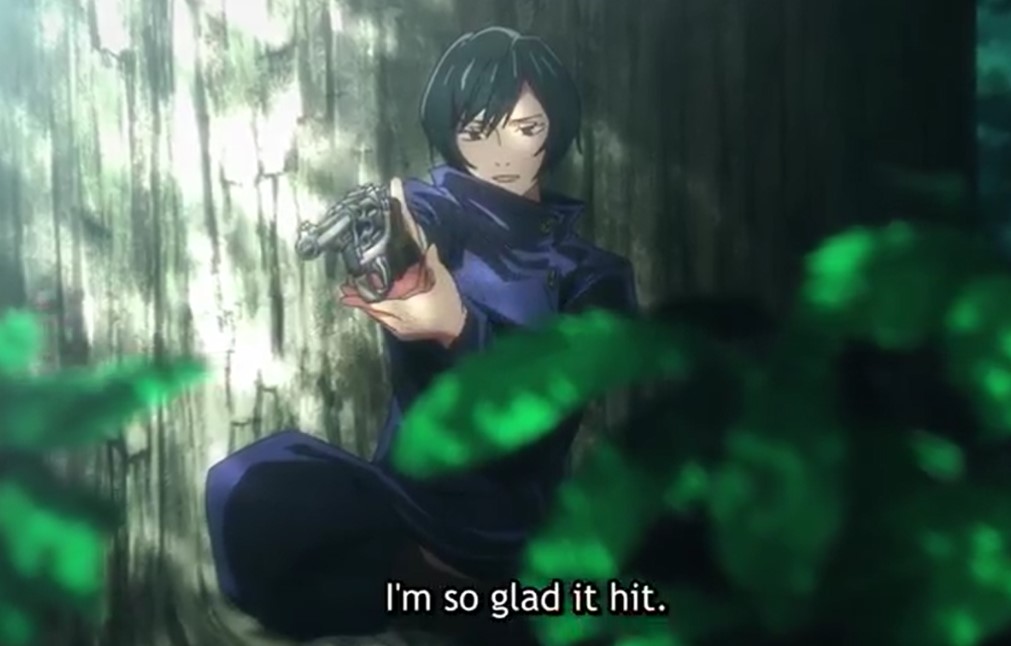 Momo is surprised where the blow is coming from since she did not attack Nabara. At a long-range distance, Mai comments that she is glad her bullet hit Nabara. Mai calls Momo and told her everything. She said to her that it was just a rubber bullet; she must not worry about anything. Mai told Momo to move before Panda is back since she has lost connection with Mechamaru Ultimate. Mai concludes that it means Ultimate has been defeated.

Maki shows up near Mai and comments that she is ready to go on a two-on-one. She is referring to Momo and Mai. Maki wants to fight those two at the same time. Mai replies that she will like to clash with Maki all by her self. She points a gun at her. Maki points a sword to Mai that she stole when battling Miwa. Mai fires some bullets, and Maki manages to cut them in half.

Mai tries every attack, and she got defeated in all her moves. She thinks that Maki has a talent she lacks. Mai continues to fire some shots, but they all miss. She got left with one bullet that she fired and thought that she has won. Maki caught the bullet and squeezed it. Mai uses her gun like a sword fighting with Maki, but she kept on swinging and missing. She realizes that Maki will always surpass her, and she got defeated so easily.

Mai recalls all the time she spent with Maki at their young age. She remembers that she used to be so close to Maki. But everything has changed after she joined a different school with Maki. After the defeated Mai question Maki about their past and why Maki is like this. Maki told her that she wants to bring change to their life.

We will keep on bringing new updates every week of Friday. If you miss the previous one, try here: Jujutsu Kaisen Episode 17.