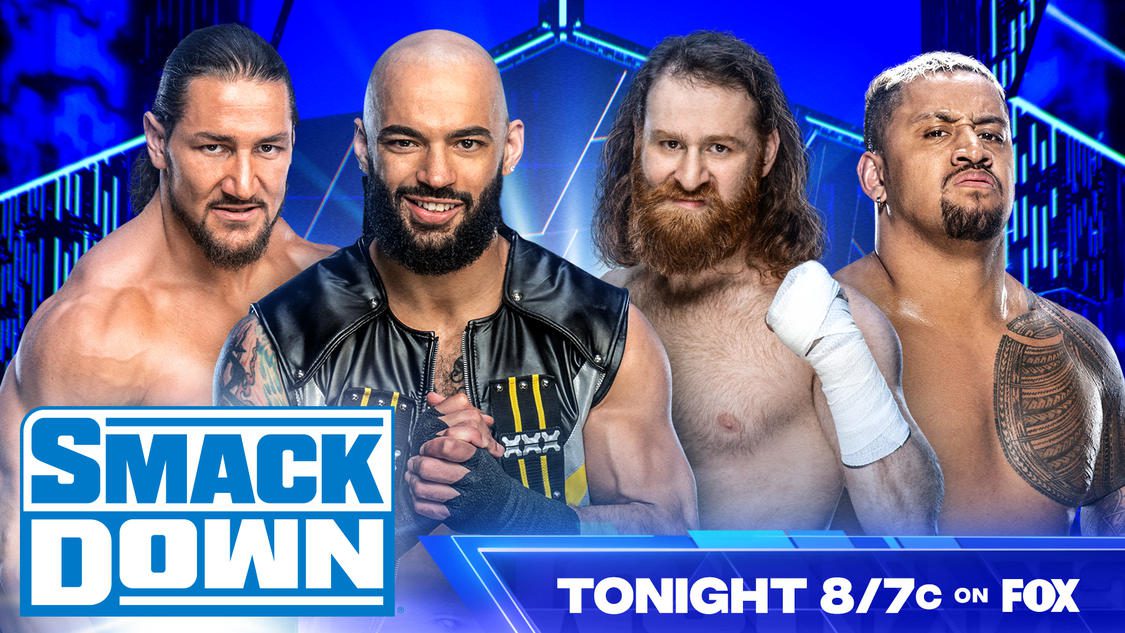 On September 30, WWE announced three matches for WWE SmackDown. Shotzi and Bayley are up first. After Shotzi filled Aliyah’s spot for a few weeks and backed Raquel Rodriguez in fighting off Damage CTRL, this match finally took place. Hit Row and Los Lotharios are the next matchups. After Angel & Humberto spoiled their party last week, Dolla and Adonis are seeking revenge. Finally, Sami Zayn and Solo Sikoa are going up against Ricochet and Madcap Moss. The Bloodline set up this match last week by laying out the babyfaces.

The Usos defeated The Brawling Brutes in the previous SmackDown episode, successfully defending their Tag Team Championship. Roman Reigns thanked Sami Zayn by giving him a unique T-shirt in another segment of the show.

Due to the show’s lack of compelling matches, the WWE Universe had varied opinions about it. When SmackDown airs live from the Canada Life Center in Winnipeg, Manitoba, on September 30, 2022, the company will attempt to make up for that mistake.

The current WWE Women’s Tag Champions, DAMAGE CTRL, frequently appear on both Raw and Smackdown, and this week won’t be any different. Bayley will compete in a singles match on the blue brand against Shotzi for the first time in more than a year. Due to the latter’s character development over the previous few weeks, this match was necessary. 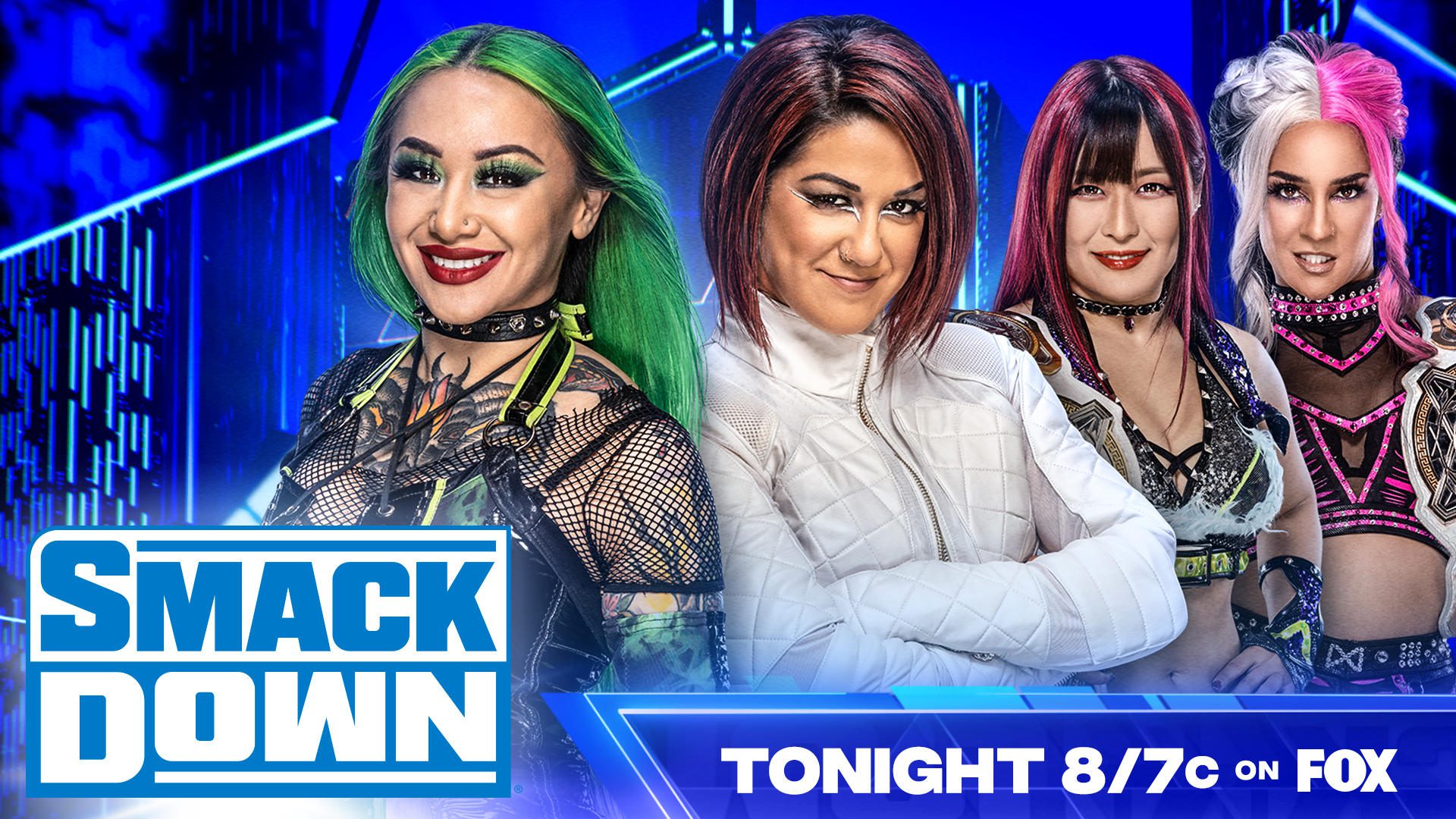 Then, on last week’s episode of Smackdown, Raquel defeated Dakota Kai, who was a member of the WWE Women’s Tag Champions. In a rematch of a previous week’s action, Shotzi saved the winner after Damage CTRL triple-teamed him once more following the match. This shows that Shotzi has changed his character to a babyface in order to make up for Raquel’s lack of Aliyah. Bayley, the Damage Ctrl’s boss, will therefore compete against Shotzi in a singles match to exact revenge for this defeat. Will Shotzi be able to beat the Raw women’s title contender?

It’s possible that Dakota Kai and IYO SKY will interfere, which would not be good for Shotzi. By creating a distraction, Damage CTRL could help The Role Model in defeating Shotzi. Then the heels might band together to plan an assault on the former NXT Superstar.

Raquel Rodriguez might then make her way back to the ring to attempt the save as a result of this. On Friday, though, anticipate the numbers game to ultimately catch up to the previous NXT Women’s Champion given how the babyface team had been able to hold their own on the prior episode.

Sami Zayn volunteered to join The Bloodline months ago when he dared to enter their locker room in an effort to protect Roman Reigns from the vultures waiting to pounce on him on WWE Smackdown. He eventually received approval from The Head of the Table last week, which cemented his position in the stable. 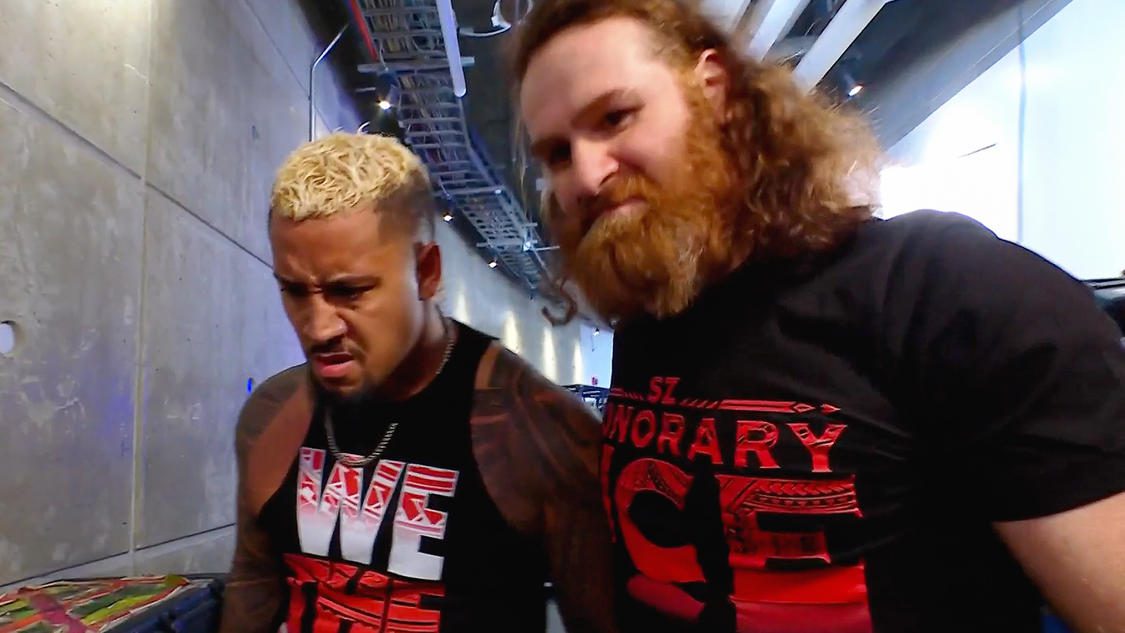 Solo Sikoa was hyped by Paul Heyman as the newest member of the group, and Sikoa later acknowledged Reigns as The Tribal Chief. After that, Reigns made fun of Zayn while Jey Uso tore The Bloodline t-shirt off his body. Then Reigns gave Zayn a brand-new “Honorary Uce” t-shirt, certifying him a legitimate member of The Bloodline. Immediately following this act, Zayn thanked Reigns in front of a boisterous crowd, and he was on the moon. Zayn will now have to compete in a tag team match to show the dominant group his skills in the ring.

Now, it appears that Sami Zayn and Solo Sikoa are getting along great. Madcap approached Sami Zayn last week in the backstage area. But Solo Sikoa, who had come to help the Honorary Uce, attacked him. Ricochet has now joined Madcap as a teammate, and the two will take on two Bloodline opponents in a tag-team match. The heel team will have even more pressure to win to demonstrate their supremacy to Roman Reigns after recently earning spots in The Bloodline.

Sami Zayn and Jey Uso have had trouble communicating with one another, which is no secret. A few weeks ago on SmackDown, The Honorary Uce and The Tag Team Champion got into a fight. As a result, expect these gaps to get wider in the following blue brand episode. The creative team can have Jey Uso accidentally cost Sami’s team their match. The Master Strategist and Jey might start fighting once more as a result of this potential angle.

After what happened in a backstage brawl, Los Latharios — Angel and Humberto — will compete against Hit Row — Ashante “Thee” Adonis and Top Dolla — and in a tag team match for Smackdown. Los Lotharios were continually flirting with “B-Fab” Briana Brandy at a backstage “VIP Watch Party” that Hit Row hosted with the Smackdown roster. The so-called “Lethal Lovers” were consequently requested to leave the area. 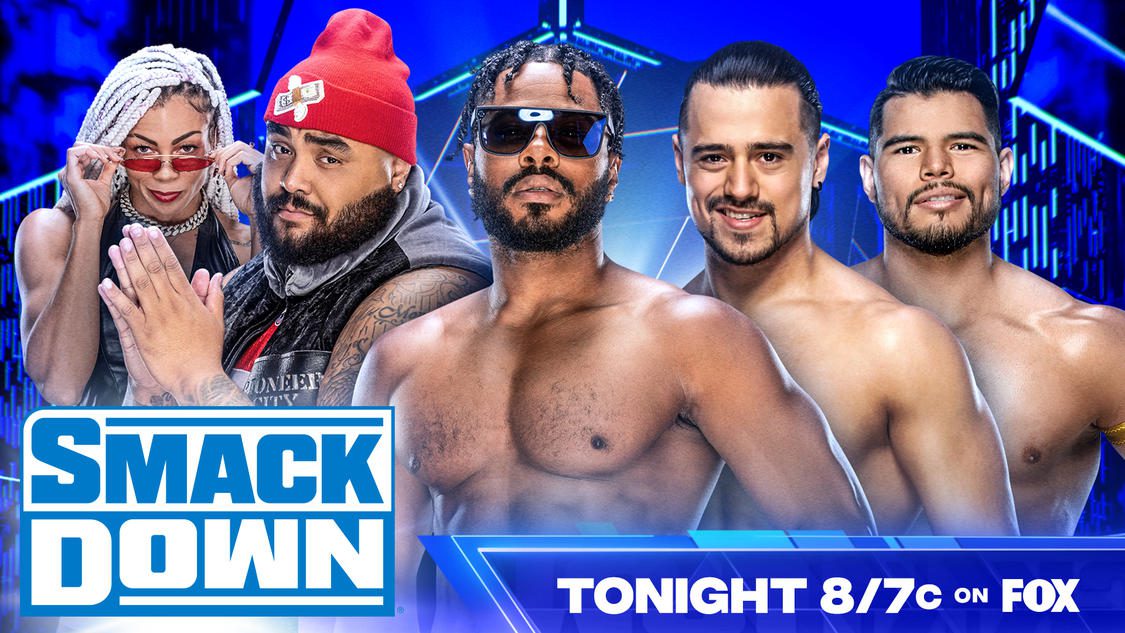 Latharios was offended by this and began an attack on Dolla and Adonis later that evening. Hit Row will now attempt to get revenge on the two Mexican Superstars, and a victory might also put them as contender for the tag team titles.

On October 8, Liv Morgan will face Ronda Rousey in an Extreme Rules match to defend her SmackDown Women’s title. Last Friday night, Morgan pushed Lacey Evans thru a table to show her extreme skill. In recent weeks, Liv and Ronda have engaged in a verbal battle on the blue brand. However, the next episode might see significant development.

Expect something similar to happen on Friday night given how WWE loves to hype Rousey’s PPV matches by scheduling her in a vicious brawl in the lead-up. On Friday night, WWE might bring The Rowdy One and Liv Morgan face to face, setting up a tense confrontation. This would be a good approach to build anticipation for their Philadelphia Extreme Rules match. 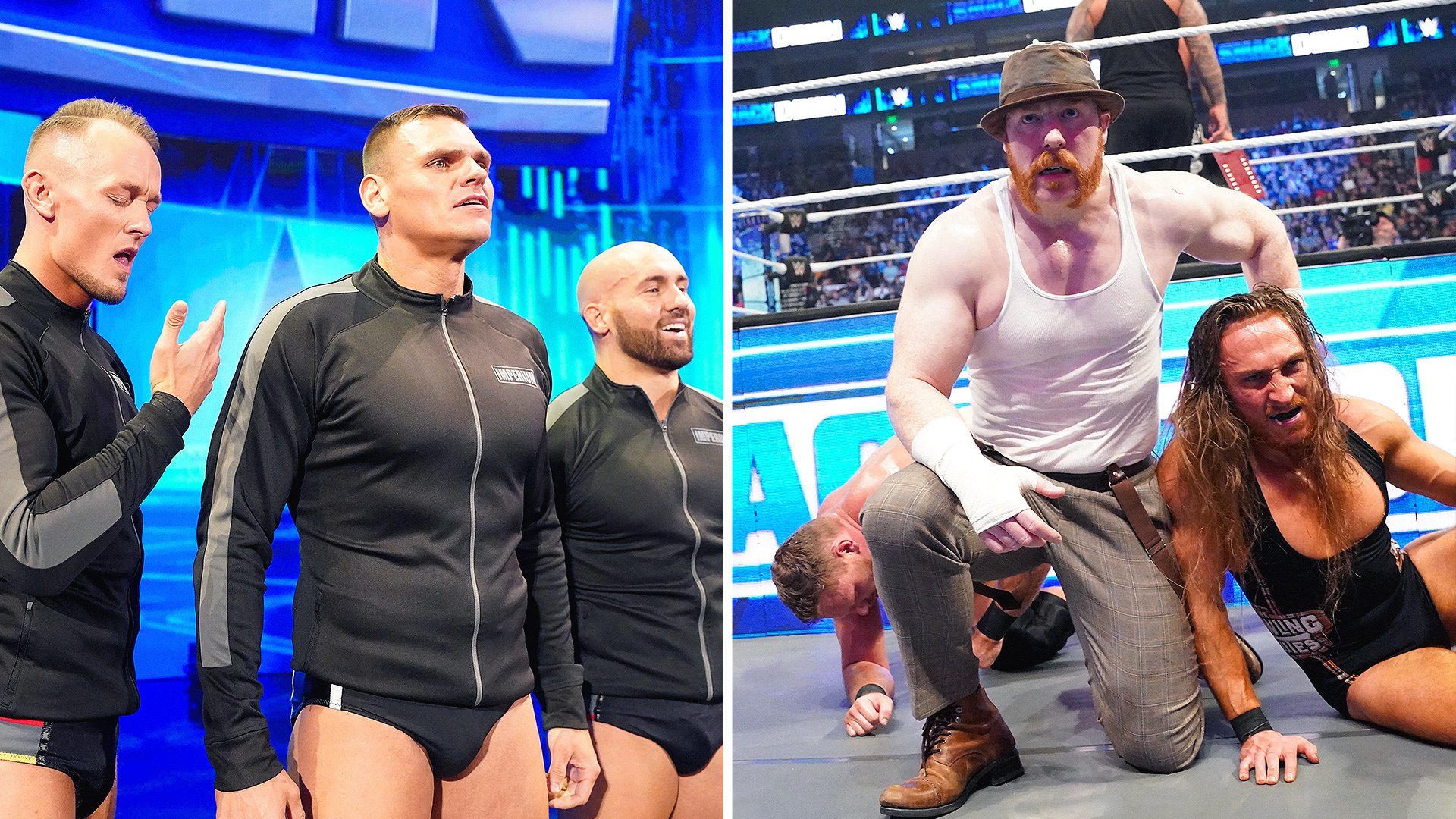 The Brawling Brutes And Imperium

The Brawling Brutes And Imperium

As was previously mentioned, Imperium’s distraction prevented The Brawling Brutes from winning the Tag Team Title on the previous episode of SmackDown. Given how last week’s events played out, an enraged Brawling Brutes might retaliate against Imperium on Friday. Holland and Butch could target their opponents to make up for last week’s problems.

On a different note, The Brawling Brutes and Imperium are presently involved in a contentious feud on SmackDown, and the truth be told, both teams have performed above and above expectations lately.

How will Drew McIntyre react to last week’s assault by Kross and Scarlet? At Extreme Rules, a Strap Match between Karrion Kross and Drew McIntyre will try to resolve their differences. Kross and Scarlett will still have some time to perfect their fireball throwing technique as I believe these tricks are allowed in that type of match.

Last week, Braun Strowman defeated Otis and won big in the ratings. After destroying Chad’s top pupil at Alpha Academy, The Monster Among Men is still after Chad Gable. With all of the losses that Maximum Male Models are suffering, Max Dupri may have reached a breaking point. Is LA Knight about to make a comeback? 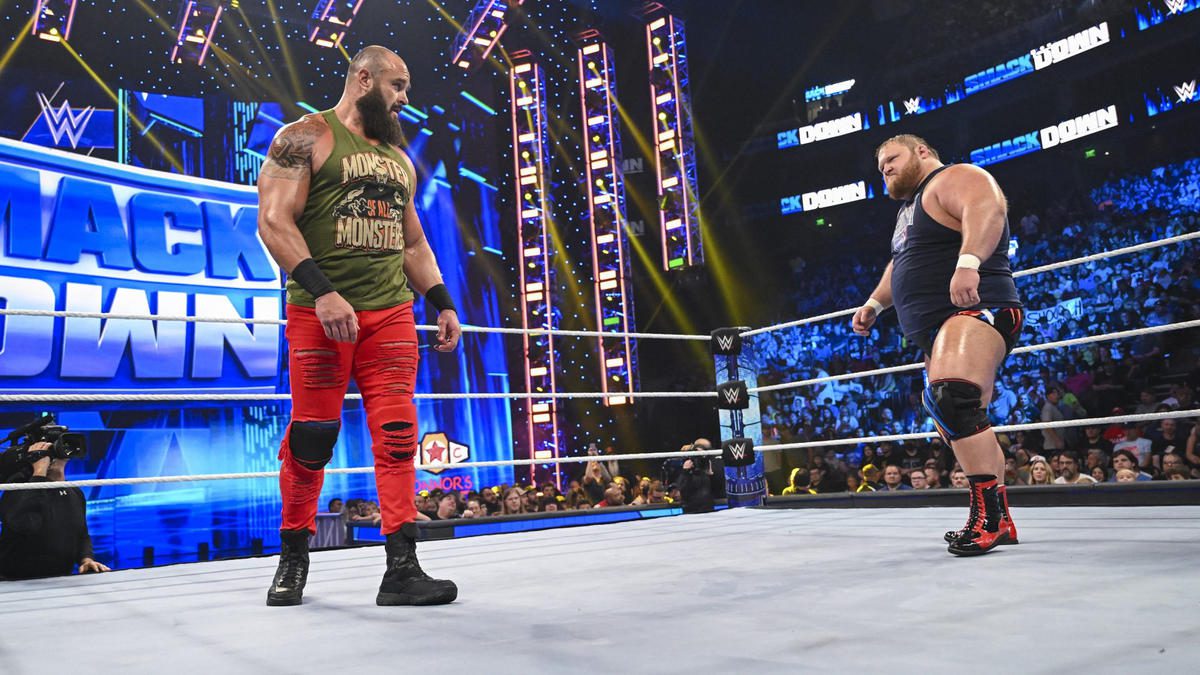 Since Erik appears to be hurt, the Viking Raiders’ offense has stopped. Has anyone seen JBL or Happy Corbin? Since her comeback to WWE television a few weeks ago, Lacey Evans hasn’t had much ring success.

For what it’s worth, Matt Riddle and Austin Theory, two Raw wrestlers, are advertised for tonight’s show on the WWE website’s Events page. Who will be the next to take on the undefeated tag-team champions The Usos? We might find out who is responsible for the White Rabbit stunt at Extreme Rules. Will these teases have any fresh and interesting twists before then?

How To Watch WWE SmackDown 30 September