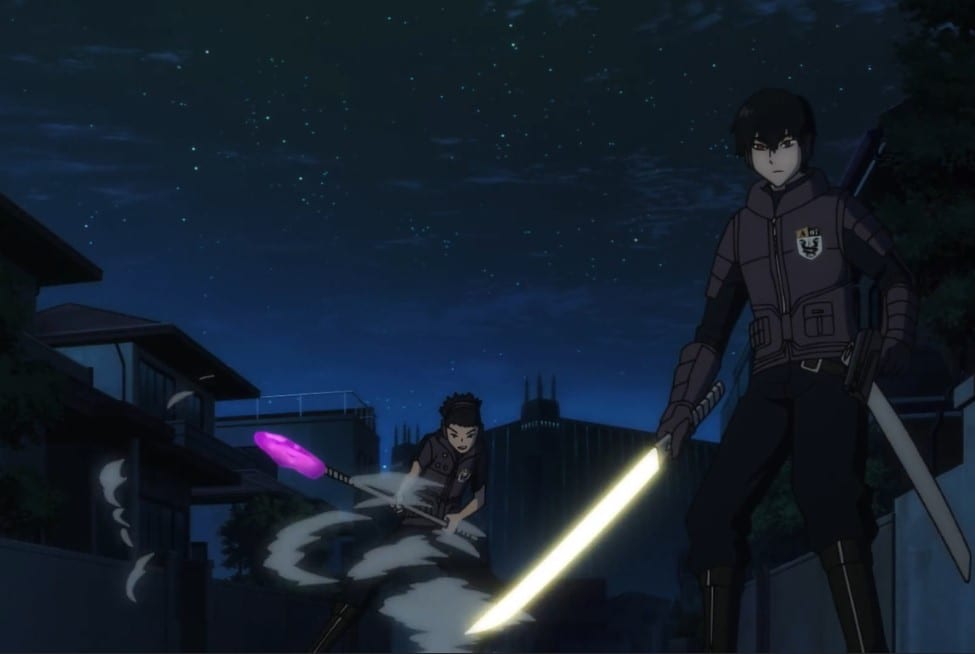 It has been revealed that the intruders have invaded the Meede base. Captain Gatti, Marduk, and Wen have infiltrated the base in disguised. When they reach inside, they clash with Jin, who lost them after seeping through the wall. The trio is after the Expedition Ship. The soldiers report to the high-ups and ask them to send the backup team. Another unit has spotted Koskerk, and the duo draws their weapon out, ready to take him down.

Hyuse has managed to get out of the building where he was with Yataro and head to the battle. He left Yataro sleeping, and when he reached the base, he heard the sound of the battle. Hyuse started to wonder which army is in battle and think that it may be Rhodo or Golopula. While the battle between Kaskero and the duo started but the Trion Soldiers helps Kaskero. In the middle of the battle, the duo notices that Kaskero uses a shield that disables blades. 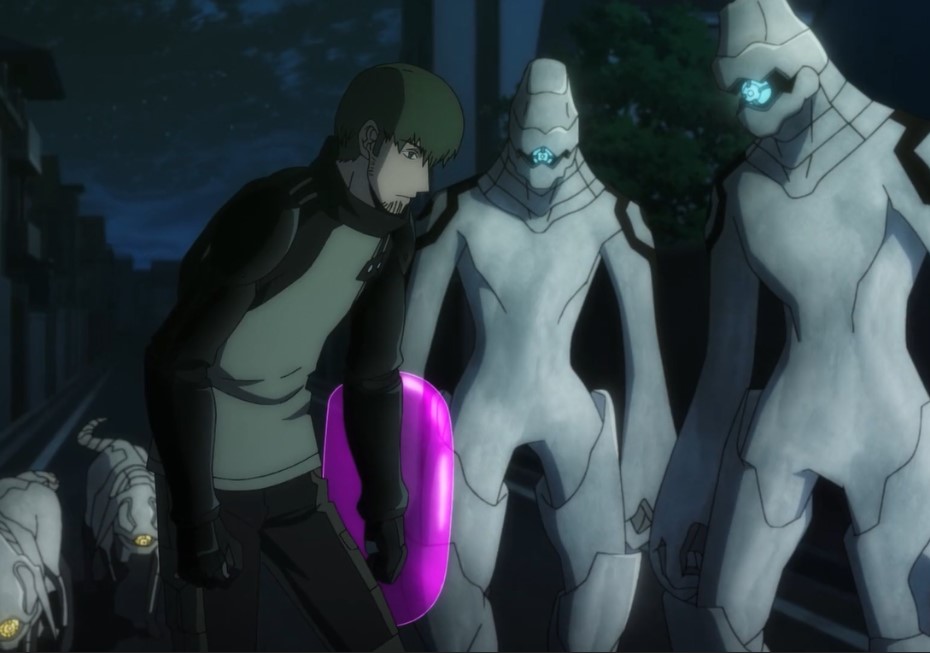 The duo has managed to take down three of the trion soldiers. The other one attacks Kaskero after unleashing a blade that matches his shield. He managed to cut through the shield along with Kaskero’s left leg. Kaskero realizes that he is in danger and asks Yomi to change Idra’s action patterns or shield without repelling the enemy’s bullets. Yomi agrees and asks if she can join the battle, but Kaskero said he would manage.

Kaskero orders Yomi to support Reghi since the Meeden soldiers are joining up. On the other side, Reghi is struggling not to get out of range. He realizes that his job is to lure the enemy away so that the trio will succeed inside, and that is when they will be victorious. Inside the building, Wen is separated from Gattin and Marduk. She faces two Madden women soldiers, and she sends the trion dogs to attack them as bait.

She followed, bending those dogs, but the dogs got taken down. One of the Meedeen soldiers lost her footing, and she notices that and takes it to her advantage. But the other one defeated the trion dogs in a single slash. Wen throws eight pens in mid-air and summons the other eight trion dogs. The Meedeen soldier finds a way to destroy the dog’s shield. She realizes that the way to beat them is to take them one by one.

She is also backing up her partner since he saw that her partner had lost her footing. Won realizes that the trion dogs will be taken down easily, and she created a smokescreen. That gave the advantage to the trion battle to fight easily with the enemy. It has been revealed that the two Meedeen women soldiers are Kuma and Rei. Kuma and Rei got lost inside the smokescreen, and Wen created a mirror image that looks like Kuma.

Rei went near the mirror image, thinking that it is Kuma. She said that she would cover her back while the real Kuma is looking for Rei. When the smoke screen vanishes, she realizes that it is Wen. Wen attacks her, but she manages to lean back, and her left hand got cut. Kuma told Rei to stay back and Rei in on her back, realizing that she knew Golopula’s transformation skills. At the same time, Masafumi is asking himself how the Golapula is planning to leave after destroying the ship. 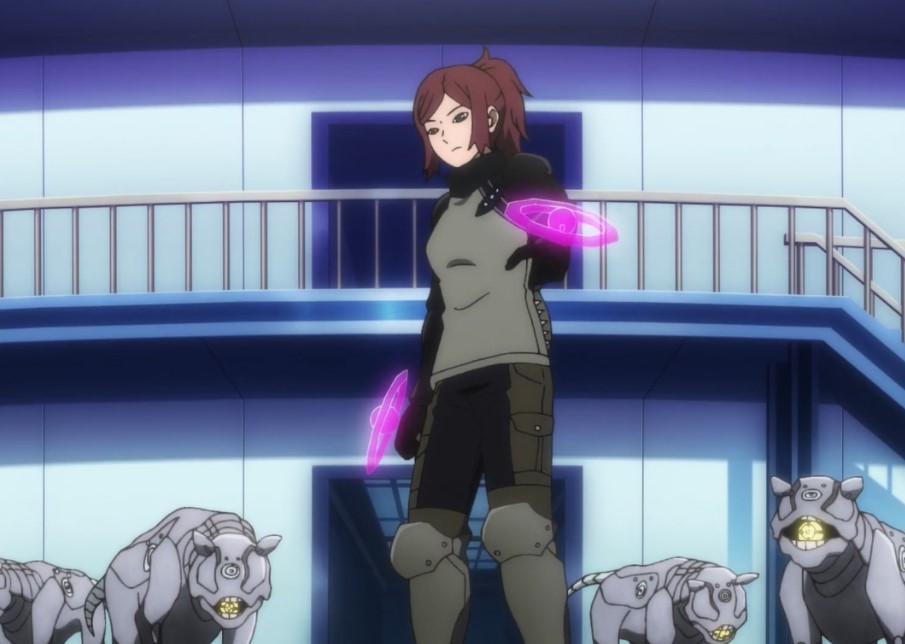 Masafumi is surprised if they are not scared that they must get caught in the process or have other plans. Gattin and Marduk have made another opening, and they are above the target. Gattin warns Marduk to be careful since he feels like their movement is being read. Marduk asks if they are waiting for them at the target, and Gattin said he is not sure. But he wonders why the security inside is so lax, and the two jump down.

Attacker rank no 4 Ko Murakami and rank no 2 Soya Kazama are waiting for them down. They report that it is two of them down in the elevator shaft to the dock. Murakami told Koya that the enemy would call the dogs via gates, and Soya thinks that two is not a big deal. Soya thinks that dog trion soldiers can not be any tougher than the previous new types. Solo said Jin predicted that, but he feels sorry for those guys coming at four of them.

Kirie comments that Jin saw the future where Solo gets split in two. Solo replies that it makes him excited while Jin is walking on the passage, thinking where he should go. He thinks that he can stay inside and help or go outside to see if he can better read the enemy’s plan. At the same time, Yataro and Rijumaru are looking for Hyuse. Gattin and Marduk have reached where their target is, and Solo and others welcome them.

Gattin and Marduk realize that they don’t have to beat all four, but they have to destroy the ship. Solo said that if they want to destroy the Expedition ship, they must first slay them. Gatting is wondering how they know about their Triggers. Murakamu caught Gattin off guard and cut his left hand, and Marduk notice that Markamu is using a trigger that hides him. The battle got intense while Hyuse is heading to was the entrance of the building.

That’s what we have managed to get the above latest updates for you; more updates will be available next week Sunday. After the release of the newest episode, we will be releasing the upcoming episode.

In this article:World Trigger Season 2