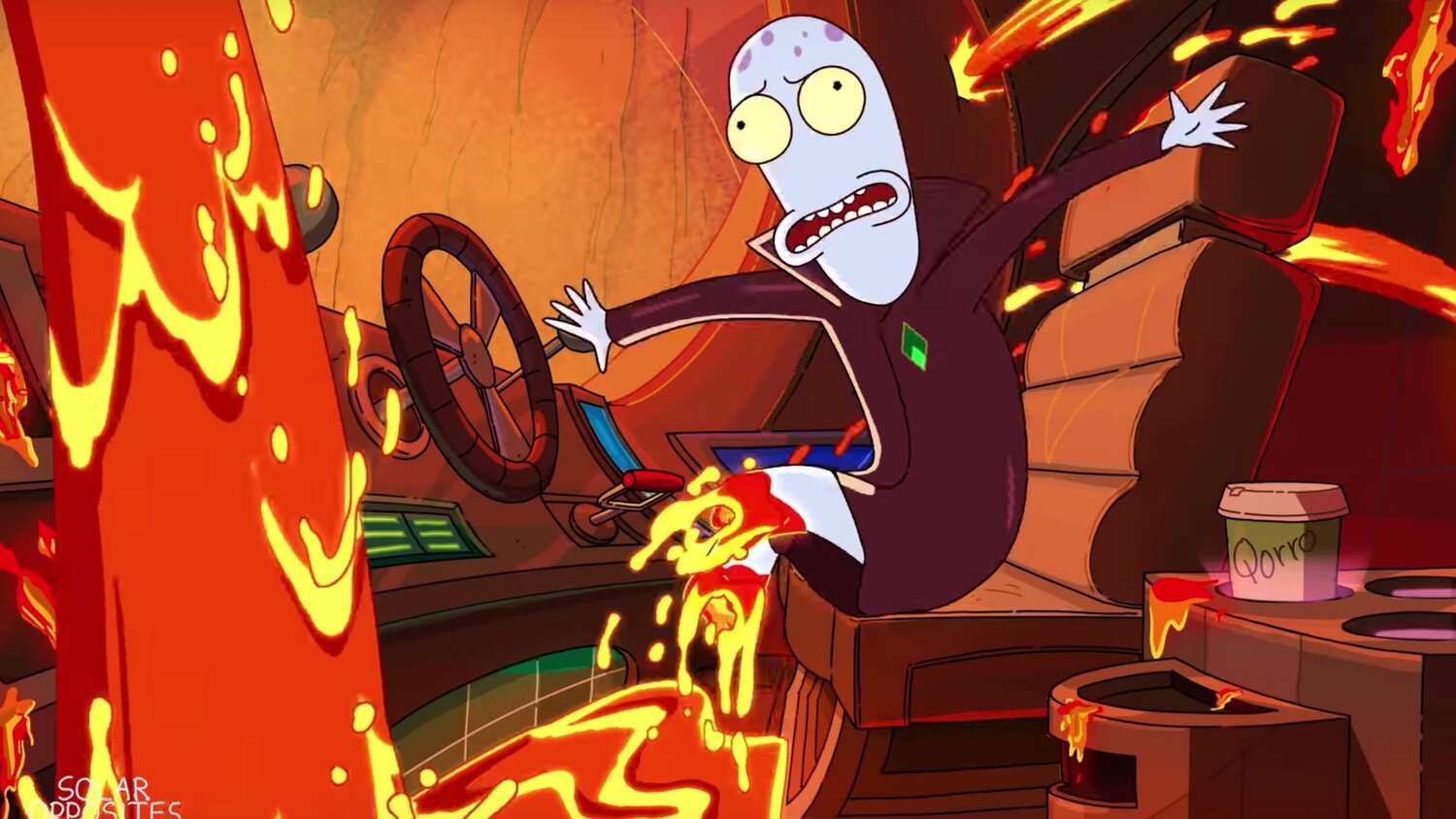 nalFinally, a comeback from episode 5! Episode 6 of the show Solar Opposites was the strongest and the most intelligent one to date. We’ll be honest with you, and even though this one was pretty damn great, we feel like the show fails to keep a steady curve. It’s one great thing, and then it drops on the humor meter significantly. Then it comes back strong. Who knows what episode 7 is going to look like. Safe to say, we only have a penultimate and a final episode to go. After this, we shall bid Solar Opposites goodbye! We didn’t say good riddance, but goodbye. How we feel about that depends on the second last and the last episode. Additionally, if you are a fan of Katy Perry’s ‘Roar’, just stay.

Before we begin to review this one, let’s recall what the previous episode of Solar Opposites looked like. Named as ‘The Lavatic Reactor’, it references pop culture in a very educational set up. By which we mean, Jesse and Yumyulack attended an empty school. They thought that the school shut up for summer break meant some sort of a psychological test of their commitment to the schooling system. So they walked in on an empty school premise, had lunch like any other day, and when they found out there was no one to teach them, they started to teach each other as Robbin Williams from Dead Poets Society and Michelle Pfeiffer from Dangerous Minds. That part was fantastic!

In another plot, we saw Korvo and Terry enroll in a junior college. While Terry expects the wild party to happen on campus, he’s shocked to see most of the students are adults. As such, they would like to go home and sit and relax. There’s a hilarious VCR Repairing class where the professor fails to repair a DVD Player and wished he knew how to. And then, of course, there are dumb jokes and gags and such. We were thoroughly unimpressed with the wall storyline. Episode 3 covered that in detail, didn’t it? And now, we bring you to episode 6– ‘The P.A.T.R.I.C.I.A. Device’. 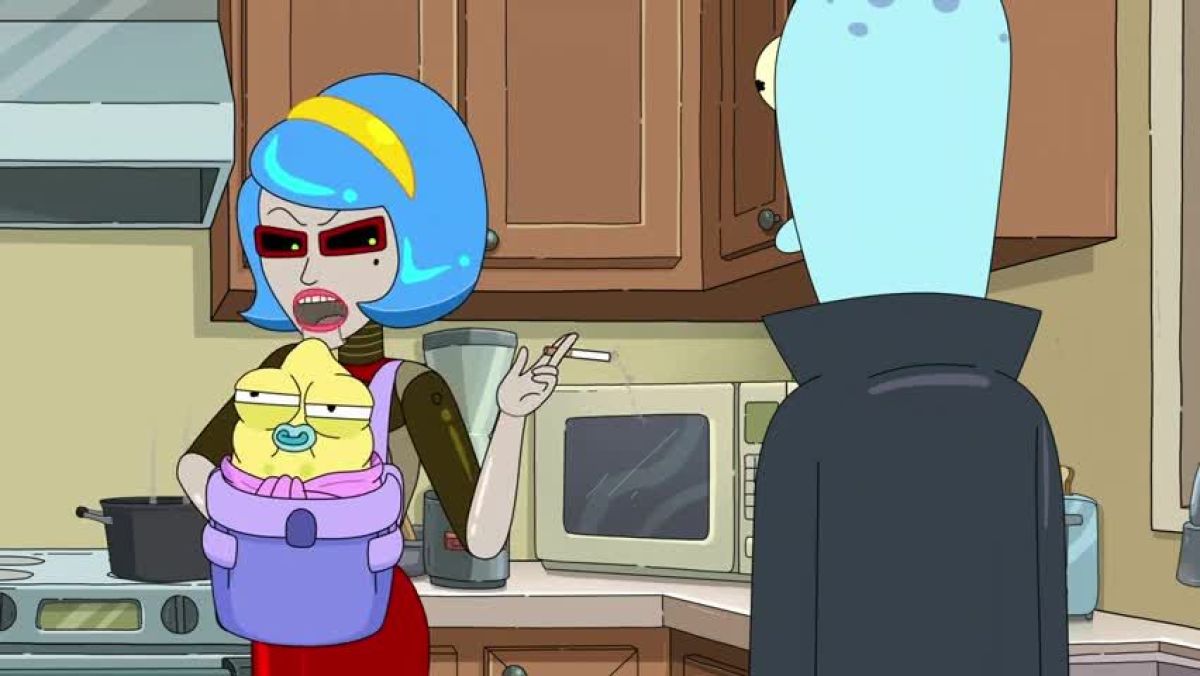 It starts with the same comedic trope as the previous episodes, albeit far more intelligent ones. This one involves gender, too. The plot is simple, and since it is applied to aliens who don’t know how to go about things on earth, they are baffled and bamboozled, more often than not. Now to escape life on earth or to successfully deal with it, they employ sci-fi hijinks and methods. All in all, the situation becomes weirdly funny. And that’s Solar Opposites for you. And if I haven’t mentioned this before, a lot of people die. Kids eat the flesh off of their faces, and there are shootouts.

So where were we on the gender issue, yeah so it is evident that the episode is about understanding gender issues and how they play out. The need of the hour, huh? These issues are explained through Terry and Korvo’s eyes. As always, they build something in their lab, this time a mom-robot or a mombot who is named Patricia. It is clear that she is modeled after four different sitcom moms and Sophia from the Golden Girls. At the same time, the school has finally opened and Jesse is dealing with gender issues since her feminist teacher has given her the assignment. The assignment is to shatter the glass ceiling and smash the patriarchy. Feminist teacher, we love you!

Yumyulack doesn’t have to do anything with the gender plot. Instead, he frees koalas from the zoo, only accidentally. We don’t actually see this happen, but there are jokes made about it. It is when he says “g’ ‘ day” and talks about didgeridoo. He’s just kept away from the central plot of this episode. Anywho, that was Yumyulack learning about Australian culture.

The most important plot of the show is that of Jesse, and we’d be lying if we say we say we didn’t see it coming. Poor Jesse is shaken when she finds out that there is discrimination against just the aliens. But girls are welcome to join the sports teams and clubs. She is inspired to learn that, and in the end, she gives an inspiring speech to the robot-mom, the mombot, and suddenly all is well! We’ve said it in the first episode, and we will repeat it. Solar Opposites is not the kind of show you learn anything from. You just watch some funny or dumb gags and forget about them. The same goes for the whole Jesse plot. No one learns a thing about gender. There are fire and chaos, and some jokes are thrown around. Jesse wears a bow and no one knows that she is actually a girl. Huh, so progressive-not so much!

Meanwhile, the show decided to do boys vs. girls club. Terry and Korvo have their boy gamer group. We hear a lot of guffaws, oinks, and cliches. The common pop-culture tropes employed here are: Boys Don’t’t Cry, Boys on the Side, and How to Lose a Guy in 10 Days. The boy gamer realizes that all other members of the club are girls, except for Jesse. It’s only because she wears a bow and no one thinks that a girl can wear a bow! 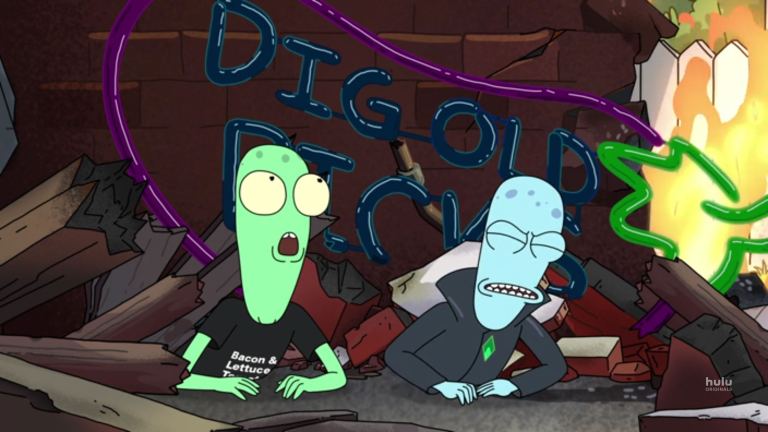 As Yumyulack frees a bunch of Koalas from the zoo, there’s a sci-fi mishap. Patricia, the mombot goes on a rampage of the city. The scene is absolutely bloody, and dreadful. Who’s going to bring back the Koalas into the cage? Since we saw a Koala hang in the background as Patricia goes on a carnage. We think she may have killed some of those too.

All in all, ‘The P.A.T.R.I.C.I.A. Device’ is a fantastic episode consisting of funniest one-liners. The fact that gender became a hot topic so quickly says a lot about what we had originally in mind about the show. We love this one and we think you will too.