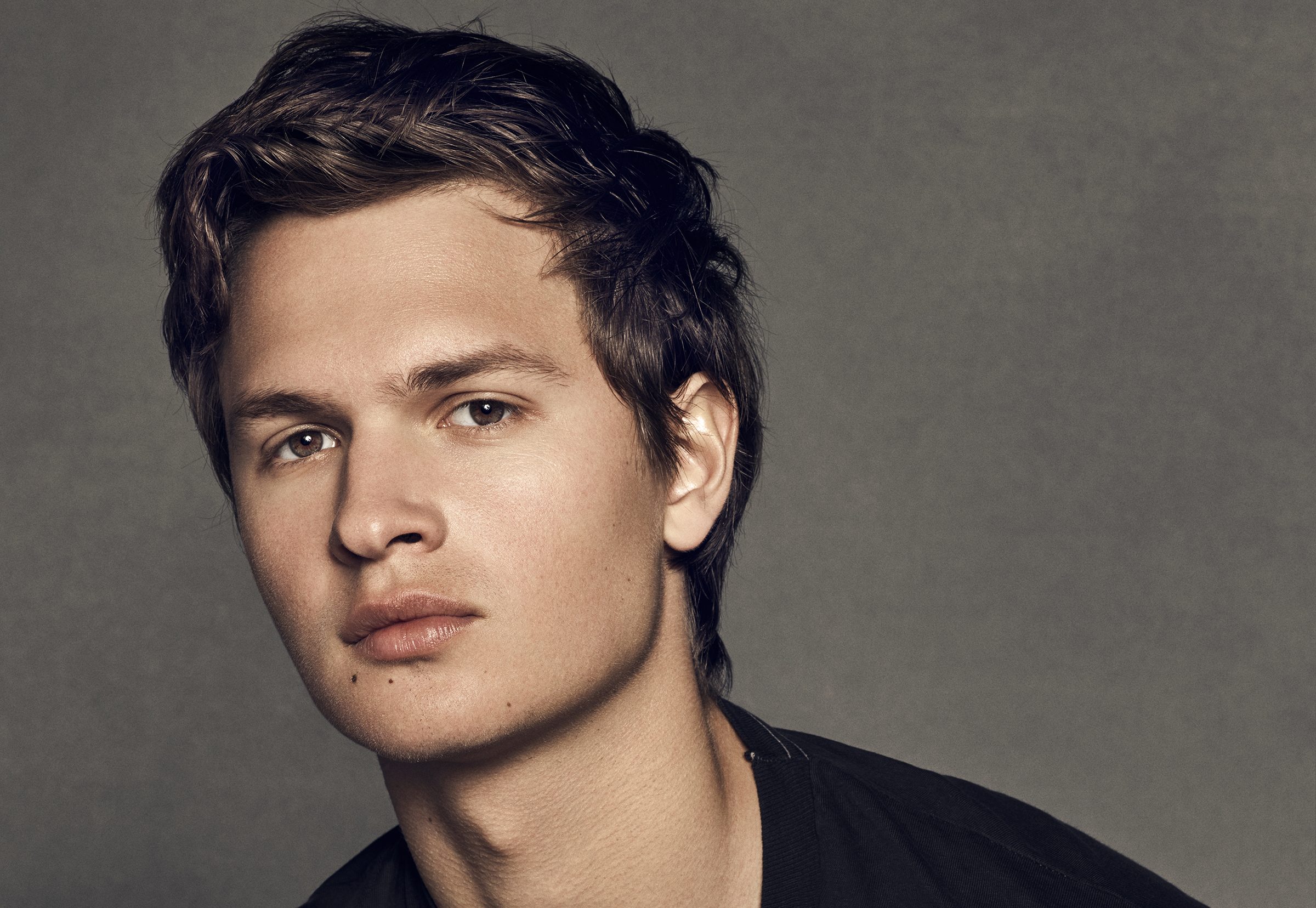 When I learned Ansel Elgort was getting his remake of West Side Story with Speilberg, I could barely hold myself together. Officially known as Ansel Elgort, the actor is more than just that, he is a singer, a dancer, and DJ under the name Ansølo. Ansel began his career with a secondary role in the horror film Carrie in the year 2013.

He is wildly remembered for his role as Augustus Waters in the 2014 romantic-drama The Fault in Our Stars. His portrayal of the good guy, best friend, and a lover, all in one raised the bar. Even though Ansel has just begun in Hollywood, one can tell he has achieved a lot, already. The fact that he is getting a movie with Spielberg sats a lot about how far he has come since he Carrie days.

Ansel is an absolute favorite of the audiences, he has a major fan girl following. Yeah, Ansel can sing, but that’s just whatever compared to his movie career. He has two tracks as a singer, the singles Thief (2017), and Supernova (2018).

After TFIOS, Ansel’s major role was in The Divergent Series franchise. His career-best performance was in Edgar Wright’s action thriller Baby Driver. The movie won him a Golden Globe Award nomination for Best Actor in a Motion Picture – Musical or Comedy.

Ansel’s most commendable roles are the various young adult films. West Side Story is coming out in 2020. Till then, here are Ansel Elgort’s 10 best movies according to Rotten Tomatoes. 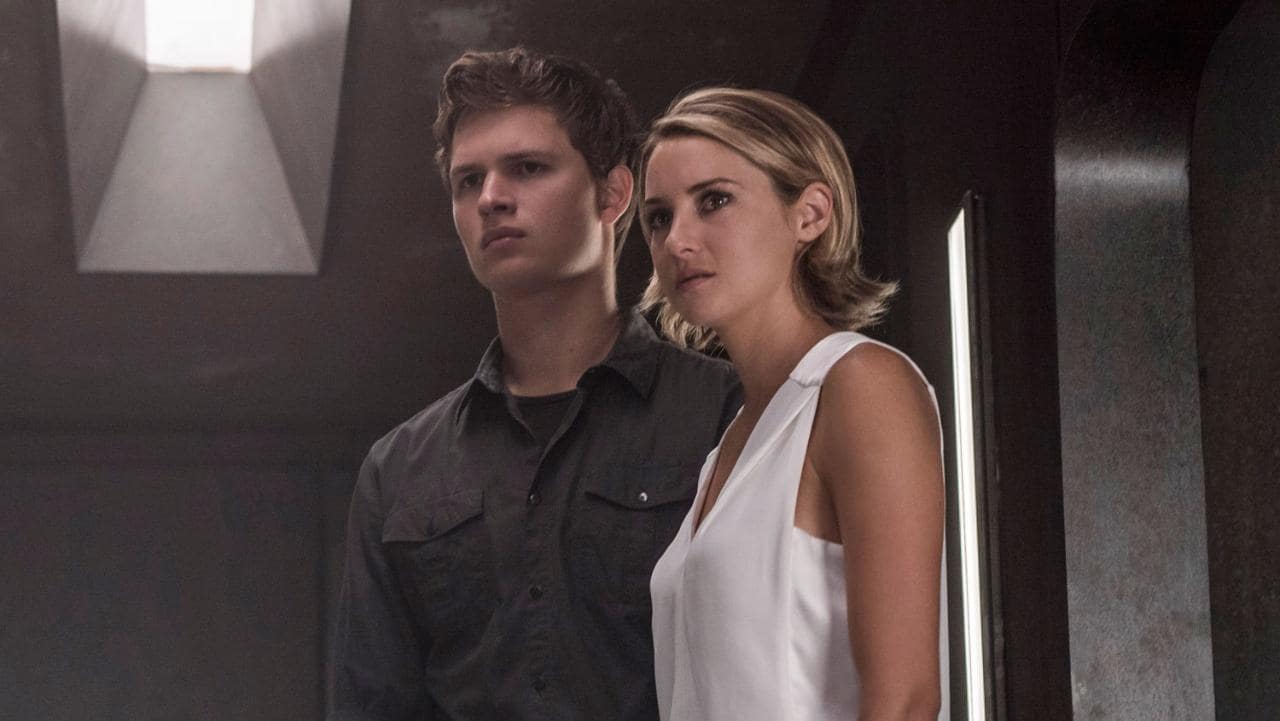 Allegiant: The third and final installment in The Divergent Series.

The movie is directed by Robert Schwentke and the screenplay has been provided by Bill Collage, Adam Cooper, and Noah Oppenheim. It is the third and final installment in The Divergent Series. Insurgent preceded it. All of these three movies are based on Divergent trilogy by author Veronica Roth.

All in all, action, Allegiant is a dramatic romance adventure. 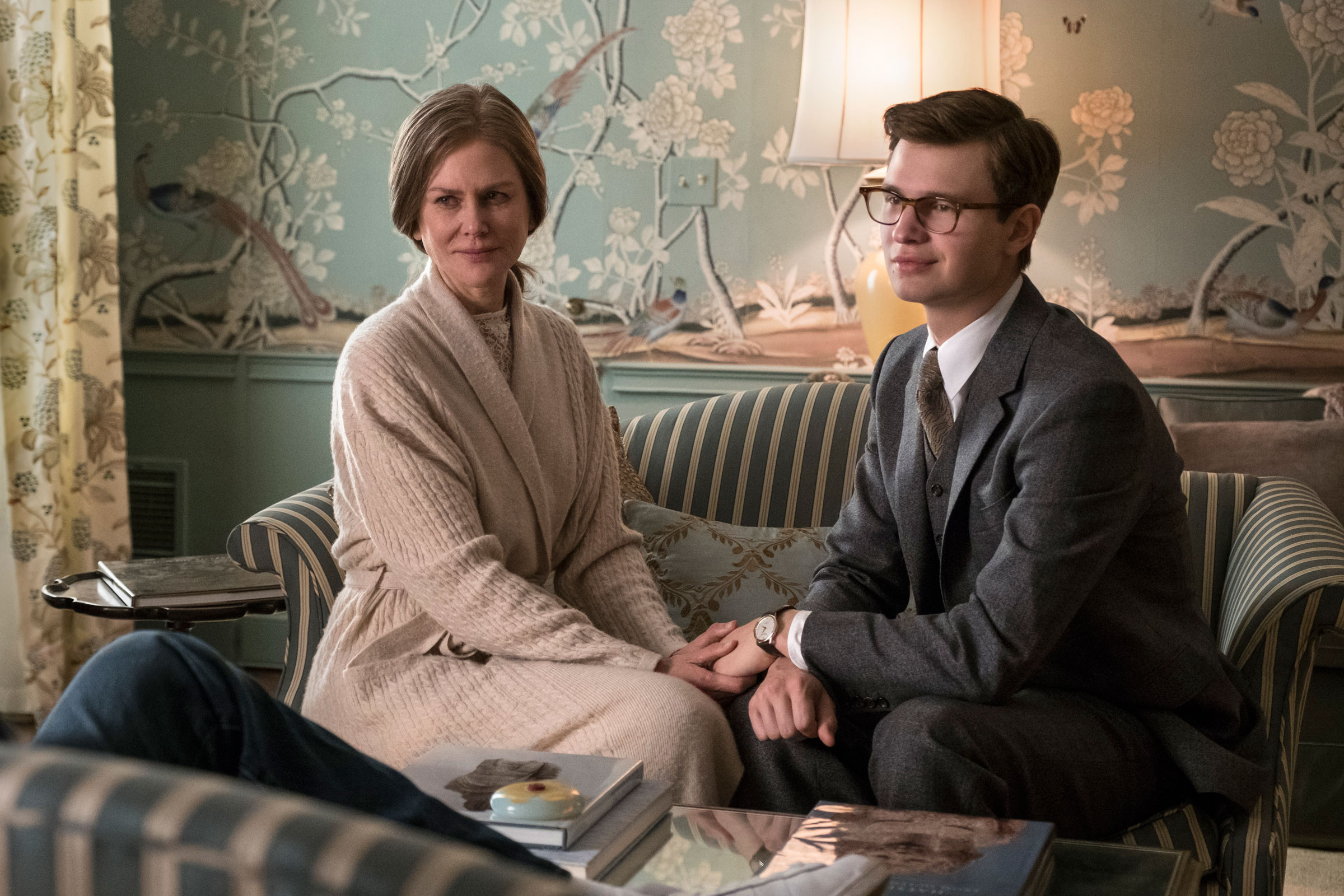 The Goldfinch: New York boy who is raised by a wealthy family.

The Goldfinch is a 2019 American film drama.

This movie is the story of a New York boy, Theodore Decker, 13 years old when is he taken in by a rich family after his mother is killed during a bombing at the Metropolitan Museum of Art. The loss of his mother sends him on a journey of grief and guilt, reinvention, and redemption.

The Goldfinch is directed by John Crowley and written by Peter Straughan. The movie is adapted for the screen from the 2013 novel of the same name by Donna Tartt. Nicole Kidman and Elgort star as mother-son duo. The rest of the cast includes  Oakes Fegley, Aneurin Barnard, Finn Wolfhard, Sarah Paulson, Luke Wilson, and Jeffrey Wright. 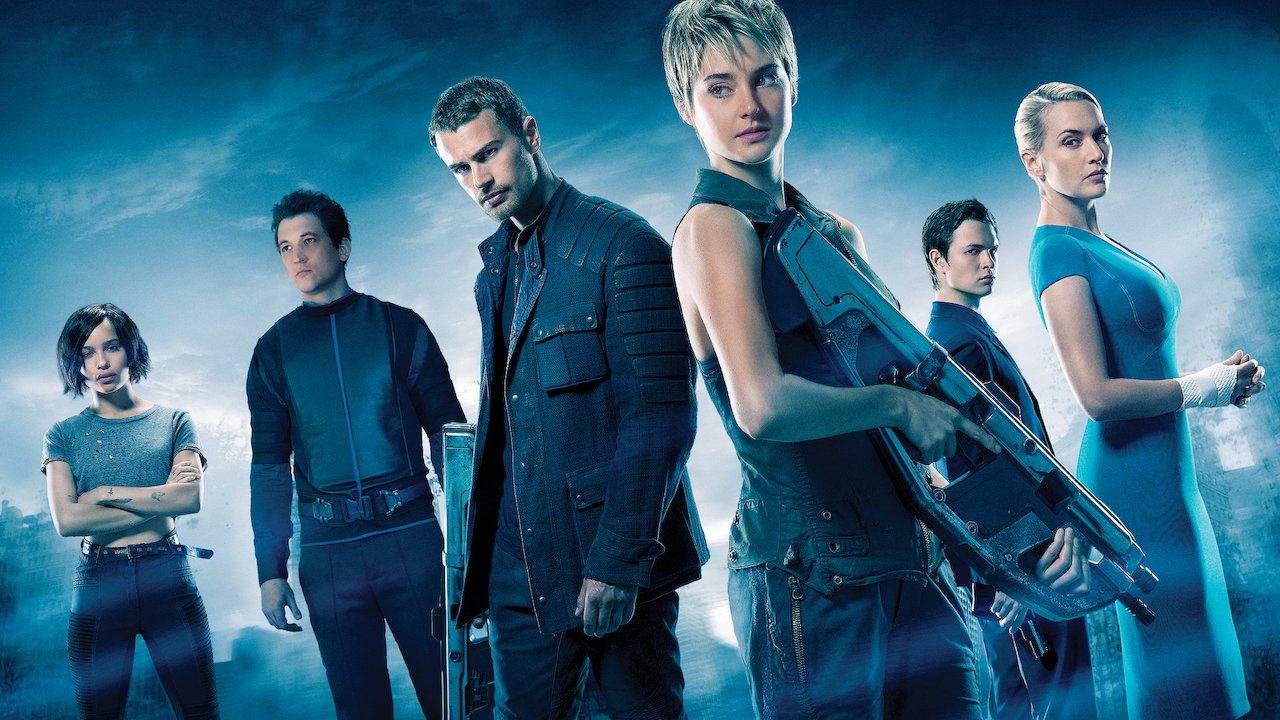 Insurgent: the sequel to the 2014 film Divergent.

The movie is directed by Robert Schwentke, and it is based on the 2012 novel Insurgent. It is the second book in the Divergent trilogy by Veronica Roth. Even though the movie belongs to Woodley’s Tris, Ansel has done justice to his character.

The story revolves around the tensions that arise in society. Tris finds herself at crossroads with the powerful alliance of her world.

This one has Kate Winslet, so you think you should watch, now? 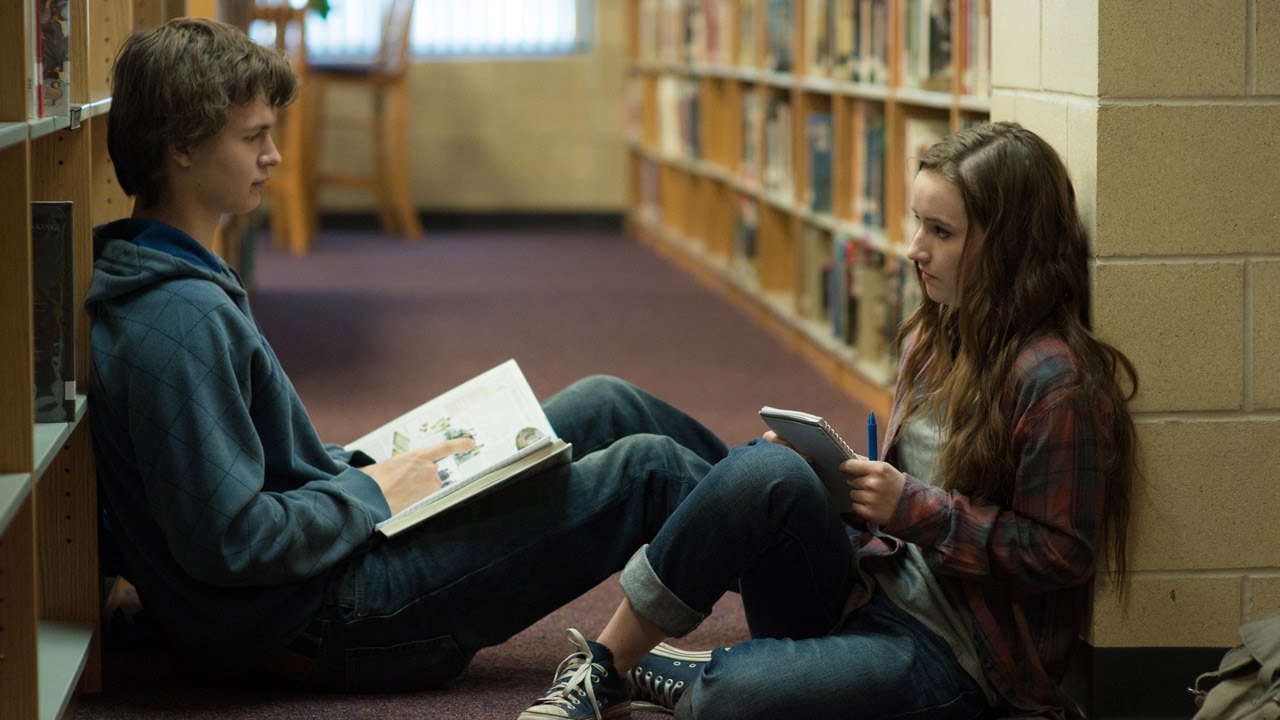 Men, Women & Children: a group of high school students and their parents.

The movie is full of comedy and drama and it traces a bunch of high schoolers and their parents. It mostly deals with cyber life and online addictions. All the characters in the movie navigate through relationships, love-life, and self-image. The cast is pretty damn good, even though the ratings are low.

Men, Women & Children is directed by Jason Reitman and co-written with Erin Cressida Wilson. It is adapted from a novel of the same name written by Chad Kultgen. Besides Ansel, it stars Rosemarie DeWitt, Jennifer Garner, Judy Greer, Dean Norris, Adam Sandler, and Kaitlyn Dever. 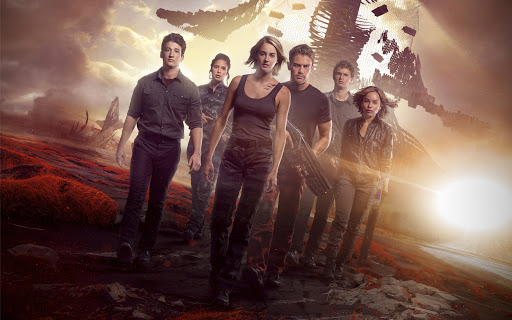 Divergent: based on the 2011 novel of the same name by Veronica Roth.

The film is the first installment in the Divergent series. It is the best of the series, the highly-rated, thus Divergent is a must-watch. It is directed by Neil Burger. In this futuristic tale of a dystopian world, society is fragmented into people called Divergents. Tris (Shailene Woodley) leads the pack as they begin their survival against the rest of the factions. 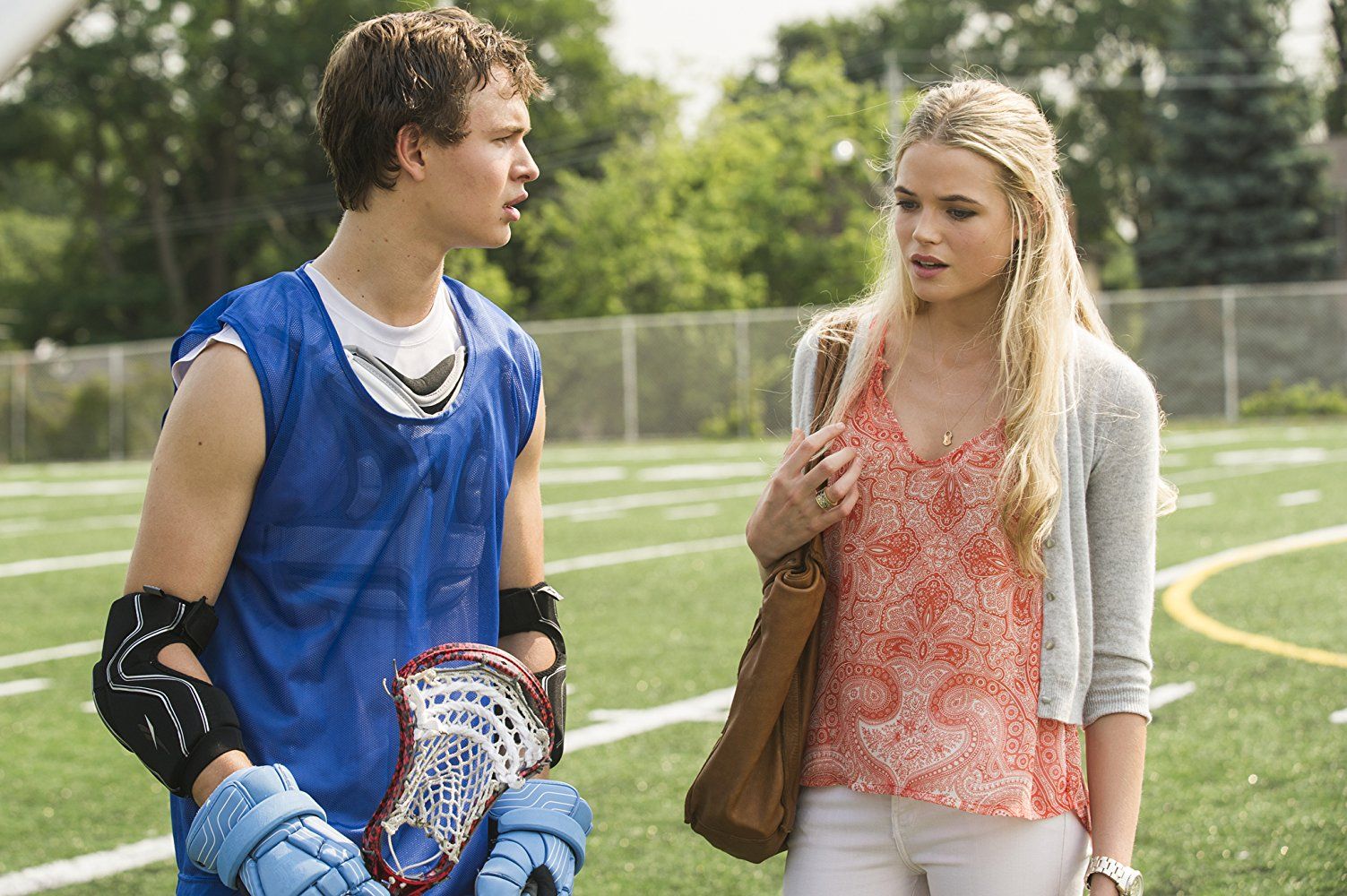 The movie belongs to Chloe Grace Moretz and Julianne Moore. Ansel has a supporting role in Carrie as Tommy Ross.

Carrie is directed by Kimberly Peirce. It is the third film adaptation, first in 1976 and then in 2002 of Stephen King’s 1974 novel of the same name. All in all, it is the fourth film in the Carrie franchise.

Chloë Grace Moretz is cast as the titular character Carrie White, alongside Julianne Moore as Margaret White. It is the story of a high school girl banished by her classmates and sheltered by her overbearing and religious mother. This horror flick makes for a compelling watch! See it for the star cast. 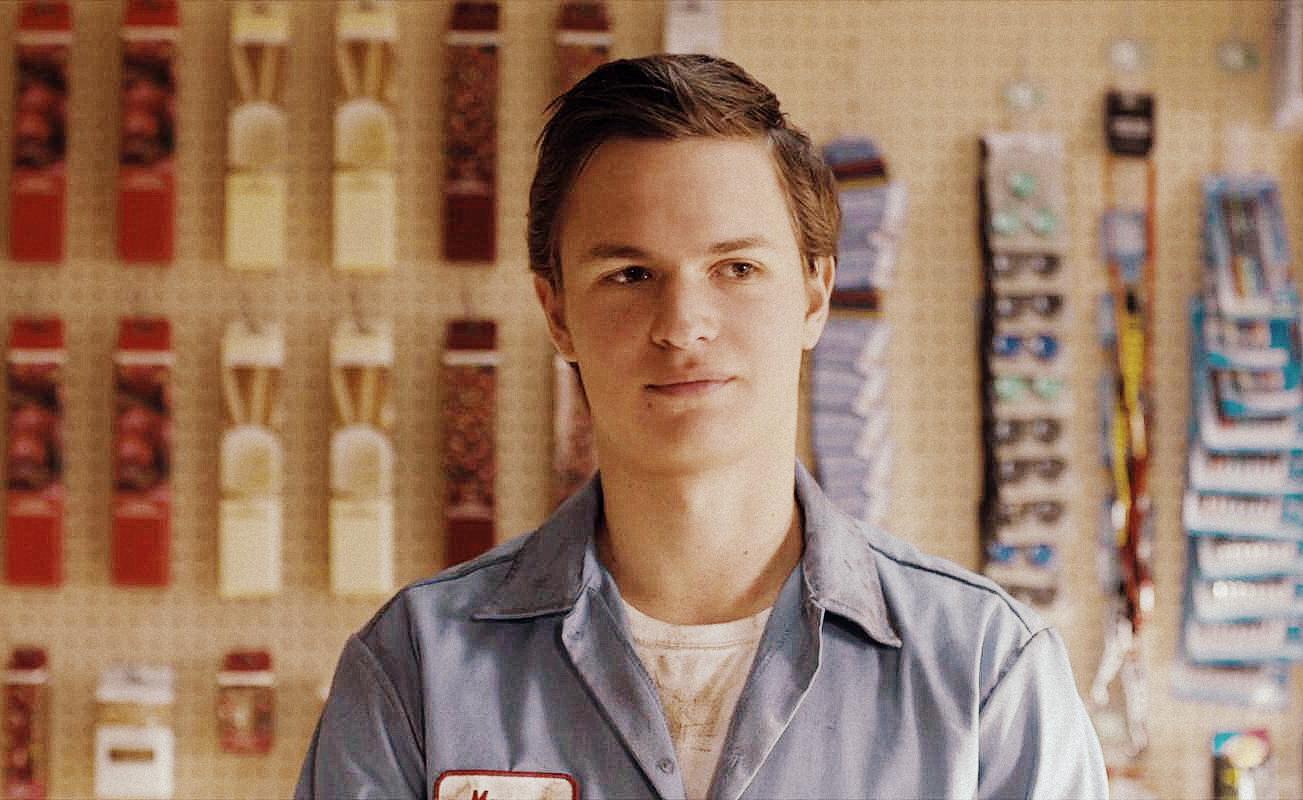 Paper Towns: Ansel Elgort has a cameo in this film.

Yes, that’s right, Ansel Elgort has a cameo in this weird drama movie. But his mate from TFIOS, Nat Wolff stars in it. Ansel Elgort starred in John Green’s first film adaptation for The Fault in Our Stars. You need an eagle-eye to catch him in this one!

Paper Towns stars Cara Delevingne and Nat Wolff in the lead roles. Ansel is seen as a gas station attendant on their road trip. Paper Towns is more like a teenage comedy-drama with a mystery adventure twist. I didn’t understand Margo Roth Spiegelman’s (Cara Delevingne) plotline. It could have been told better. Quentin “Q” Jacobsen’s (Nat Wolff) obsession is a pretty odd one. You gotta watch it for Ansel’s cameo though. 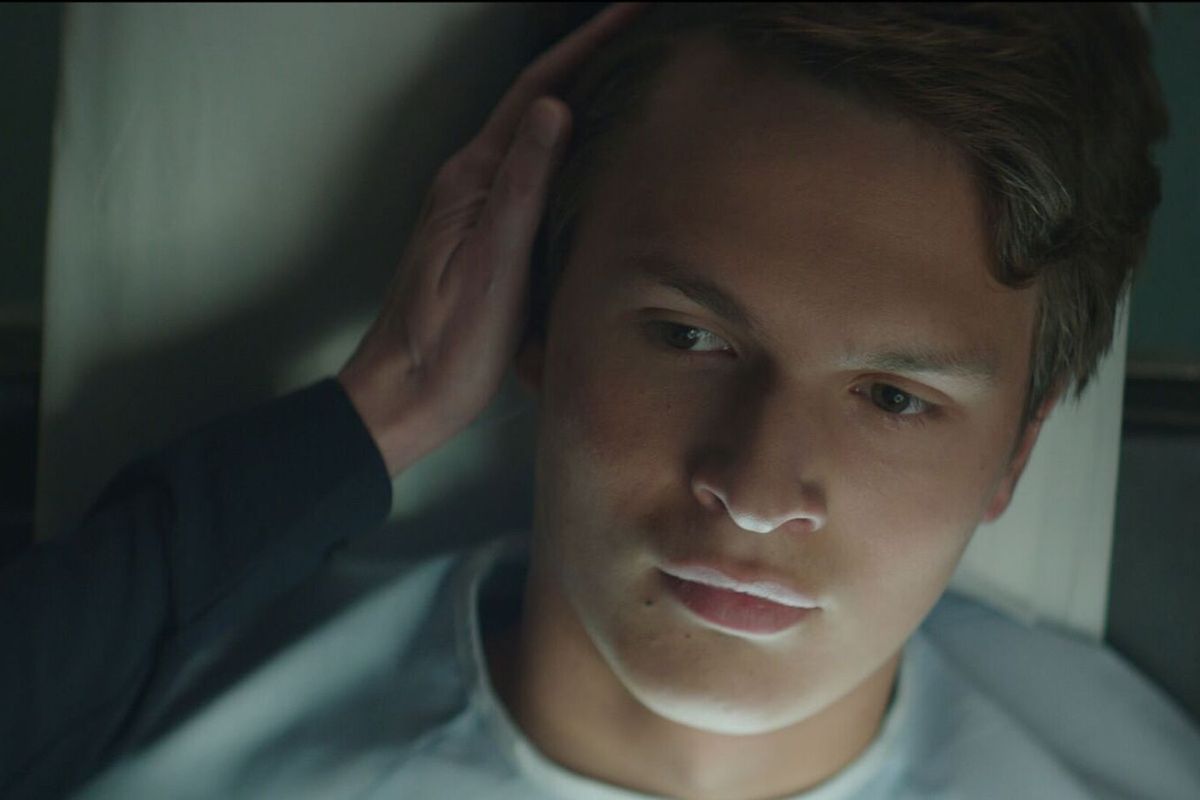 For a sci-fi drama as deep as this one, it is a highly underrated movie. The plot centers around Jonathan (Ansel Elgort), whose life seems to be going okay. He goes to work, home, sleep–the usual. But he has a brother, and they share the same body. Creepy, right? John gets the night shift, and Jonathan gets the day shift. That’s how these two live.

Jonathan is directed by Bill Oliver and written by Gregory Davis, Peter Nickowitz, and Oliver. It stars Ansel Elgort in the lead role.

Things mess up when John gets a girlfriend, and Jonathan decides he wants more from life. Jonathan had its world premiere at the Tribeca Film Festival. It is a loco movie, but it won in the eyes of the critics. Ha! 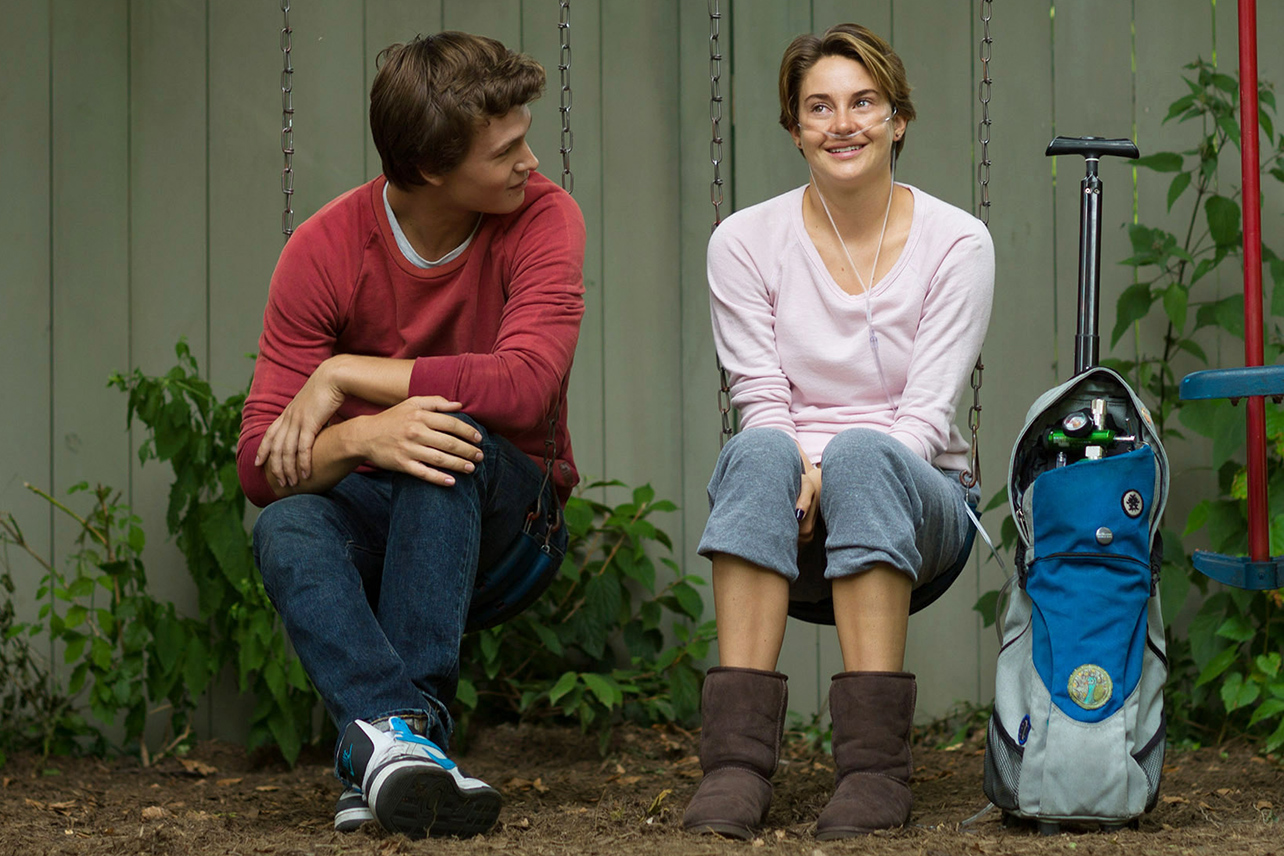 The Fault In Our Stars: Augustus Waters plays a cancer patient,

The Fault in Our Stars is a 2014 American romantic drama film.

No matter how big a star Ansel becomes, we will never be able to see him past the role of Augustus Waters. What an absolutely charming character he was!
The Fault in Our Stars is directed by Josh Boone. The movie is based on the 2012 novel of the same name by author John Green. It stars Shailene Woodley (Hazel) and Ansel Elgort as the romantic couple lead, both cancer patients who go to Amsterdam to visit Hazel’s favorite author. The supporting roles are played by Laura Dern, Sam Trammell, Nat Wolff, and Willem Dafoe.

Where do we even begin with this one? Please watch! 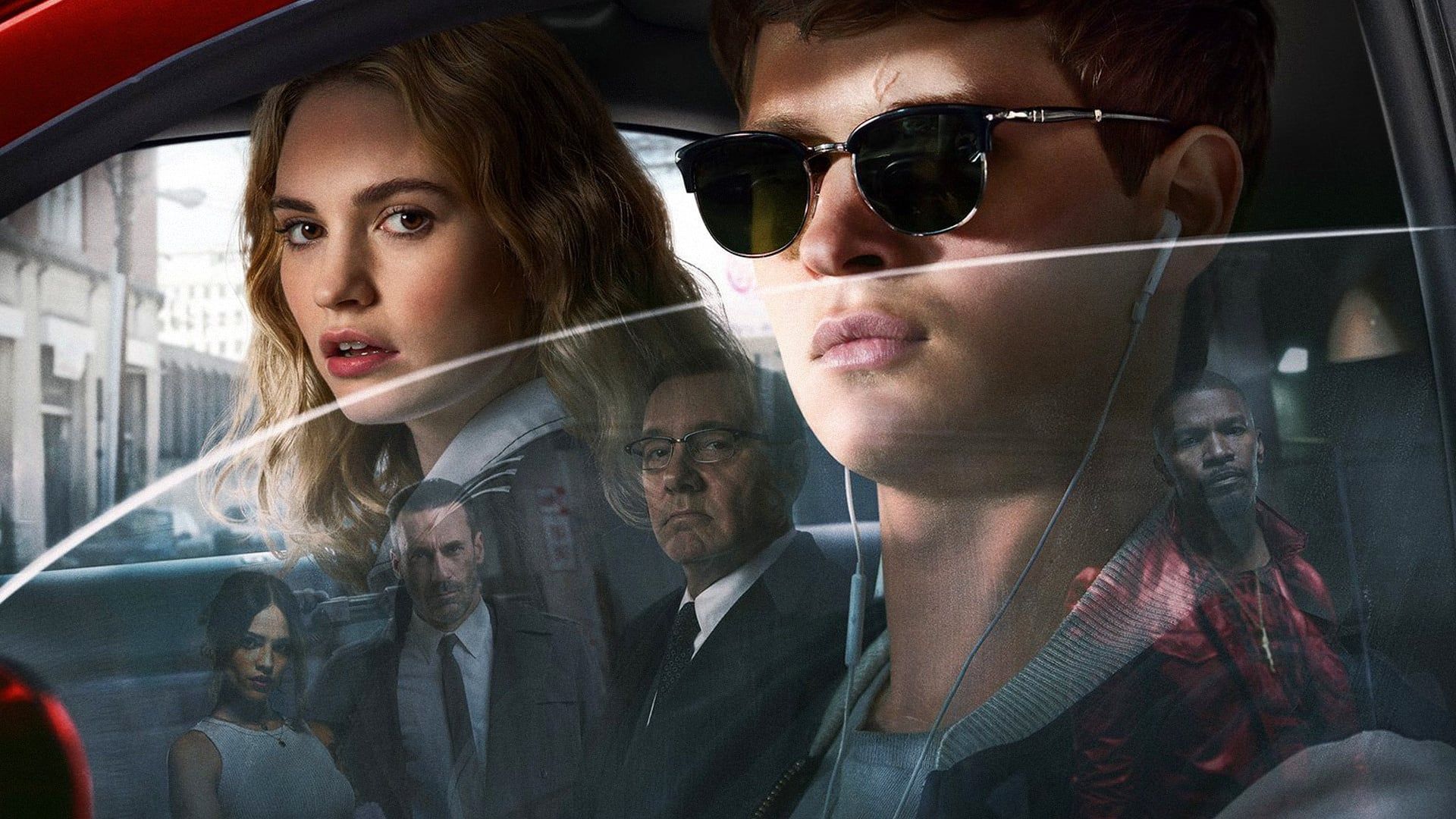 Baby Driver: the action-crime drama is thrilling to watch.

Baby Driver is directed by Edgar Wright. It is one gripping action flick that combines stellar driving, and a terrific soundtrack.