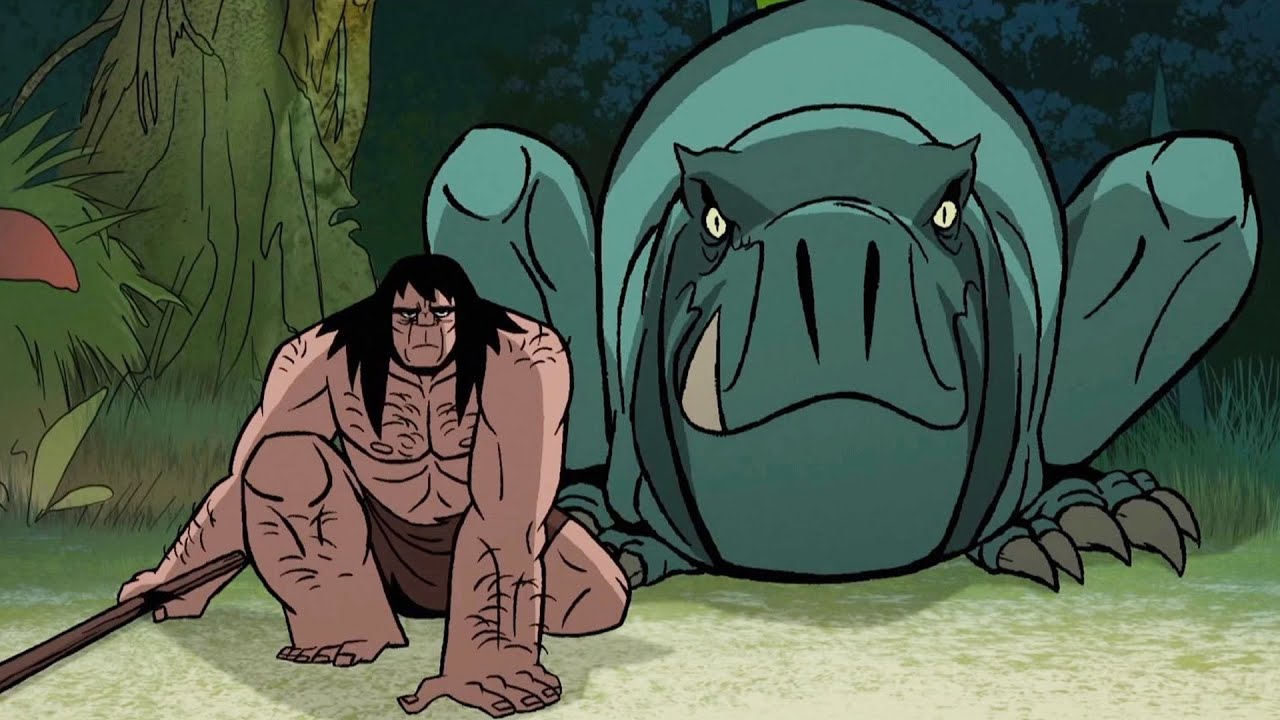 The Primal TV series is on its second season, and everyone is still thrilled about it. Celebrities like Chris Evans have come forward to praise its unique design and vivid storytelling that does not shy away from the cruelty and gore of the Iron Age while creatively mingling it with anachronistic displays of history and extinct creatures. The second season was renewed on July 21, 2022, for another ten episodes. The series features the companionship of unlikely sorts between a tyrannosaurus rex named Fang and a caveman called Spear.

The storyline revolves around the duo overcoming their differences and having each other’s back, while the obstacles they face give a glimpse of a world whose secrets are more hideous than their wildest expectations. The creator and director of the TV series, Genndy Tartakovsky, has proven his worth yet again through the conception of this amazing nail-biting drama. Genndy has several hit animations to his name, like Batman: The Animated Series and Hotel Transylvania’s first three installments.

In season one, we see the growing friendship between the female dinosaur and the caveman after they have lost their families to the same brood of dinosaurs. They kill the titanic dinosaur to avenge their families and set out on a journey of survival together. The show is very animalistic and real in its depictions of the savage and primordial existence of the creature on that piece of land. We encounter a variety of ominous practices, from the mystic tribe of witches to clans of hominoid apes that indulge in gladiator tournaments. The season leaves breadcrumbs into the second season, with the coming of a Homosapien woman and the return of the monkey clan that kidnaps her. There is also a spectacle of zombification that might be leading into the second installment of the series, but we are yet to know.

At the beginning of season 2, we see Fang and Spear embarking on a journey across the ocean to find Mira, but they get lost in its vastness with no food. On the brink of death, they hunt a gigantic tortoise and eat it. Soon, a storm hits, and are almost torn by a megalodon but reach the shore, only to notice that they have been separated. Fang meets a male therapod and bonds with him. Whereas Spears ends up fighting celts but bonds with them. Unfortunately, to provide Fang with easy food, the male takes her to feed on the celts. When the male, Red, tries to kill Spear, she bucks him off, but he falls to his death. Fang is left heartbroken. Spear and Fang get together again, but their relationship is strained. A man on a bear attacks the dino, but she rips the bear apart, and Spear notices that the symbol on the rider’s shield is the same one branded on Mira’s head. They kill him and find Mira and the other slaves in his village. When opposed, the duo attack the villagers but Spear has second thoughts after seeing the women and children, but the women, in the moment of unclarity, spear Fang. The duo retaliate and slaughtered the village. After they leave, other members come back and swear revenge on the murderers of their village. 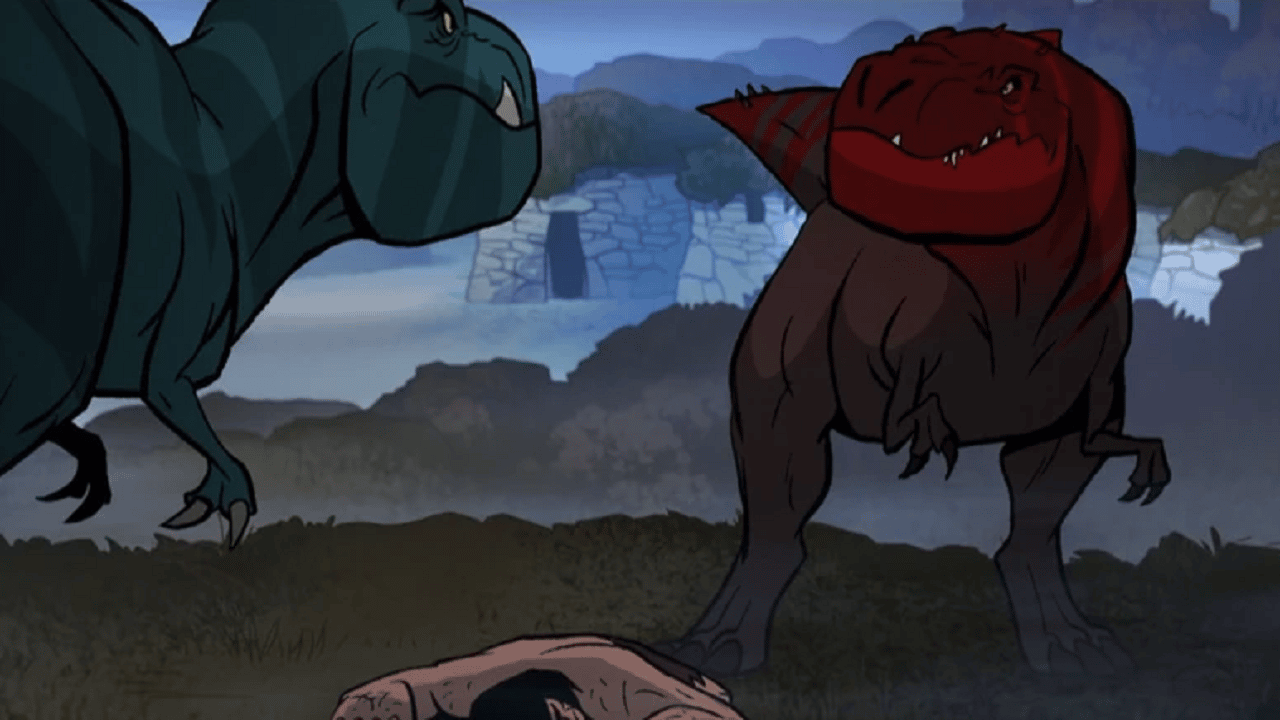 In episode 5, the scene is shifted to 1890 England; Charles Darwin talks to a group of scholars about how, though we have evolved, we still have the base instincts of a primal then they are warned about a mad man running loose. But the claim of savagery in modern humans is refuted by one of the scholars called Lord Darlington. Soon they are attacked by the mad man, and the lord, understanding that Darwin was right, reverts to his killing instinct to kill the mad man just like Spear kills the giant T-rex in the first episode of the series.

We come where we left off in episode 6, where the trio is attacked by Vidarr, the leader of the dead village, and his son. When his son is thrown into the river, he runs after him, and the trio saves themselves and their ship. We discover that Fang is pregnant by Red, and so does Spear; therefore, starts helping her. On the other hand, Vidarr hallucinates a horned man who urges him towards revenge. Fang lays eggs as Spear and Mira guard her with joy. When Spear tries to touch them, she rebuffs him, but he understands and provides for her. Vidarr and his son attack the trio with tamed, large birds, and a fight commences, in which the son falls to death, or so it seems.

What To Expect In Episode 7?

In the upcoming episode of “The Colossus, Part I” we will immediately get to know if Vidarr’s son actually died or if he is still alive, most likely dead. Though the biggest concern is the vulnerability of Fang’s eggs because the father and son might destroy her eggs as a part of their revenge when Fang, Spear, and Mira are busy fighting one of them off. We may also see Mira’s and Spear’s relationship blossom like Fang’s and Red’s did. There might be more information about the horned man to be given since we do not yet know if he is a chieftain that is directing this slave trade from a far-off land or if he is a god that the Vikings in the series believe in, maybe we will get an insight into the zombie plague we encountered in season 1.

More information about Mira’s culture might be revealed since the way she and her tribe look like Egyptians. Another point to be noted is that Vidarr, in the series, according to Norse mythology, is the son of Odin and the god of vengeance. The directors might use this aspect to further explore his character. The creator, Genndy, confessed that season 2 is “even more emotionally complex” than the first one.

How To Watch Season 2 Episode 7?

The episode is going to premiere on Adult Swim, and HBO Max at 12am ET on the 25th of August 2022. The series will also be streaming on Amazon Prime and DIRECTV after the premiere. But since the program is unavailable outside the United States, using a VPN might be an option. You can do so by downloading an appropriate VPN and then proceeding to clear your browser’s cookies and cache. Then you can open your VPN application or your browser extension and set up services in the US. You can commence streaming it on your preferred website. If you have not watched the first season, do watch it on the websites mentioned above.