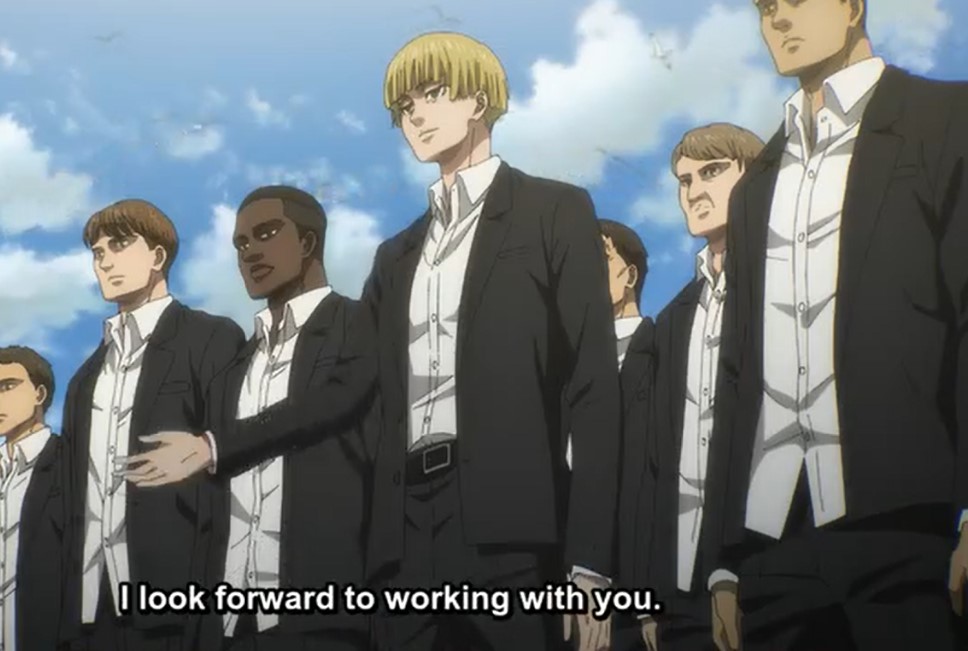 Yelena reveals her story on how she first met with Eren at Pradis Island. Her good is to free the Eldians, and the next day in the morning, she heads out with her crew. Yelena met with Eren near the beach. She comments that she hasn’t seen him since the day he lifted their ship last year. Yelena offers a handshake to Eren, telling him that she is looking forward to work with him. Akerman interferes and said Eren would never come in contact with any of Marley’s people again.

This is the last time they see Eren’s face in front of them. Yelena comments that will be enough and today is an auspicious day. She reveals that the port is complete, and they will welcome foreign dignitaries for the first time. Yelena looks at the see, she saw a ship and comments the following. The only friendly nation to Paradis, Hizuru, and their ambassador, Kiyomi Azumabito.

Episode 11 will be released on Monday, 22 February 2021, at 12:10 AM JST. Watch and stream Attack on Titan on Crunchyroll, AnimeLab, Funimation, and Netflix. Let visit the history of the two-nation below. 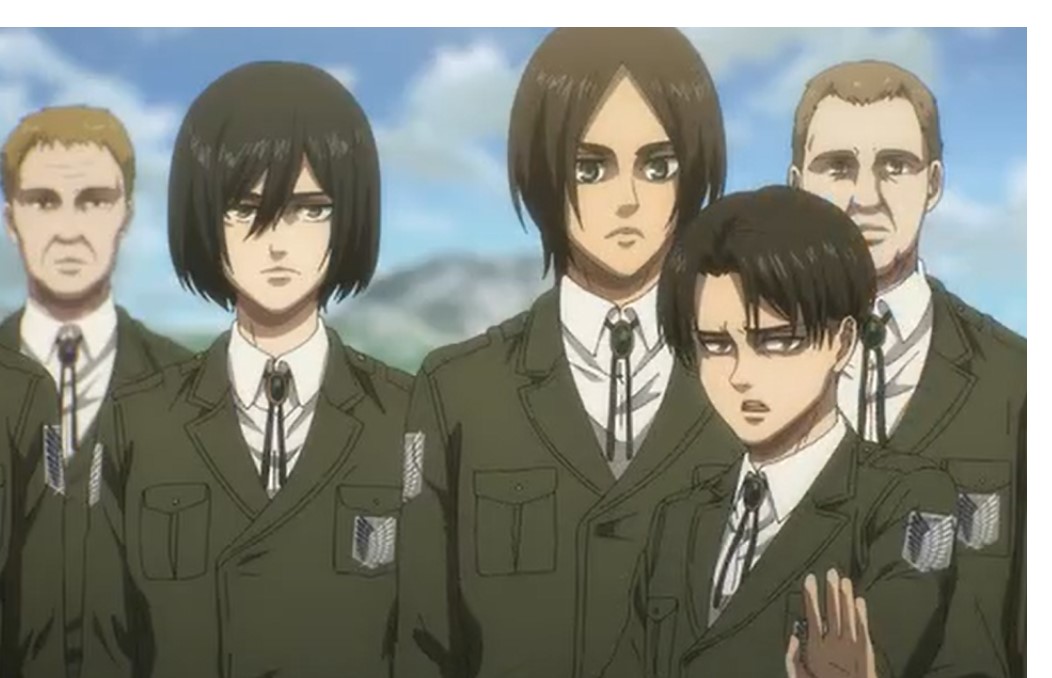 Mikasa and others went inside the church with Kiyomi Azumabito. Kiyomi showed Mikasa a family crest. She asks Mikasa if she recognizes it, and the crest had a symbol of three swords in it. Mikasa realizes that she has a mark of three swords on her hand, but her mother told her to keep it a secret. She decided to show it to Kiyomi and comments that the mark has been passed down on her by her mother. Mikasa reveals that her mother told her to pass the mark to her children.

Kiyomi said that it is a noble act since Mikasa is not hiding anything from them. Kiyomi reveals that around a hundred years ago. There was a Shogun’s son from Azumabito family lineage. He was on good terms with the Fritz family and visited this land. After the Great Titan War, Hizuru was defeated and lost its standing in the world. The remaining members of the Shogun family were left on this island. Kiyomi said Mikasa is the descendent of their nation’s lord, whom they lost.

She also said that Mikasa is the Hizuru’s hope. Other soldiers who were listening to the story are confused. They don’t even understand what a nation is, and they started gossiping about it. They think that they can do whatever it takes to exploit Hizuru. One of them thinks that Kiyomi must have laid a trap for them. They think that they will first hear what Yelena will say about it. One of the old hunks comments that it is what Kiyomi and the crew wants.

The old geezer comments that they can stay quiet and listen until the end. Mika’s friend asks why she only shows that mark to Eren. Eren realizes that she is digging too deep and interferes. The girl comments that they both shoulder a heavy burden because of their birth. She taps Mikasa’s stomach and says there is no better person to have as a companion than Mikasa. The meeting started, and Kiyomi said today is a historic day for both of their nation. 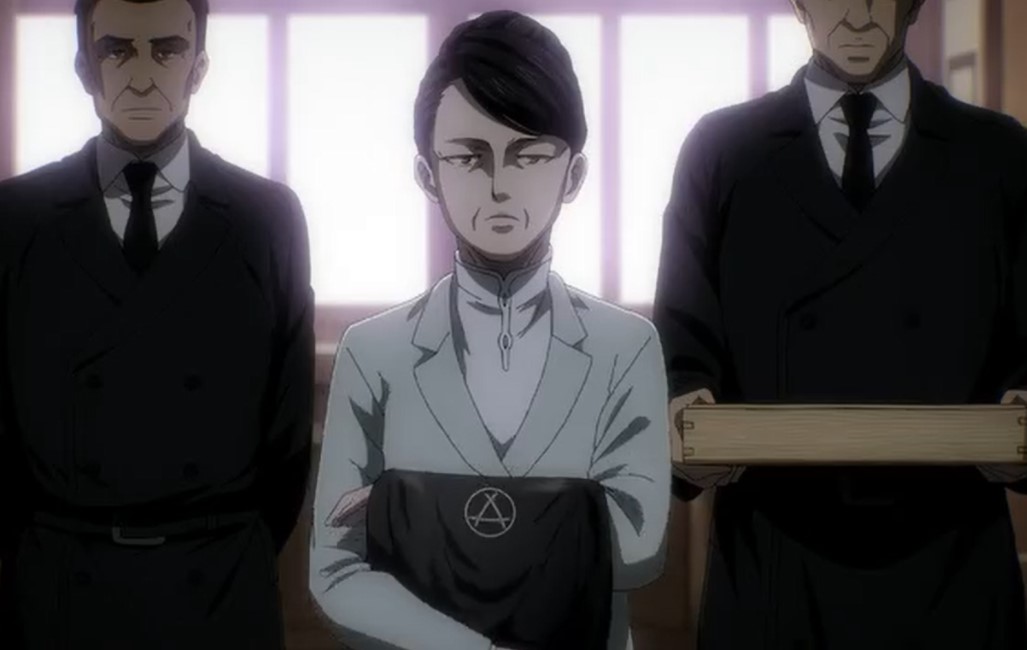 Kiyomi thanks Zeke Yeager, who has brought them together, and if it were not for him, this day would have never come. She is glad that she met Mikasa, and they met with a man in secret and agreed to certain conditions. Kiyomi remembers when she met with Zeke. That day Zeke show Kiyomi something that was supposed to be top-secret in Marley. Zeke reveals that he carries a vertical maneuvering gear that is a Titan-killing weapon they have developed on Paradis.

Zeke reveals that Kiyomi must rest assured since he has checked the weapon with care. He offers the weapon to Kiyomi. Zeke told Kiyomi that she would need a special kind of fuel to make the weapon work. The fuel is called an ice-burst stone, and it is an unknown underground resource that has only been mined on Paradis. Back to the present, Kiyomi showed Mikasa and others the second Hizuru’s mediation.

She reveals that their goal will be to raise the military strength of this nation. To the point, it will no longer require Rumbling to protect itself. Christa agrees with the idea of inheriting the Beast Titan as long as rumbling is necessary for their continued existence. Eren did not like the idea; he is worried about the children and the livestock’s lives. He told them that he could not agree with Zeke’s plan.

Find how Yelena met with Eren for the first time on this link: Attack on Titan Season 4 Episode 10.